The family of a comedienne who killed herself have defended her friend after he was branded transphobic over his new special.

Relatives of Daphne Dorman, who took her life in 2019, defended Chappelle’s comments calling him an ‘LGBTQ ally’ after he received criticism from the community.

‘Daphne was in awe of Dave’s graciousness,’ Dorman’s sister Becky had written in a text, according to The Daily Beast.

‘She did not find his jokes rude, crude, off-coloring, off-putting, anything. She thought his jokes were funny. Daphne understood humor and comedy—she was not offended. Why would her family be offended?’

‘Dave loved my sister and is an LGBTQ ally,’ Dorman’s younger sister Brandy also added in the message. ‘His entire set was begging to end this very situation.’ 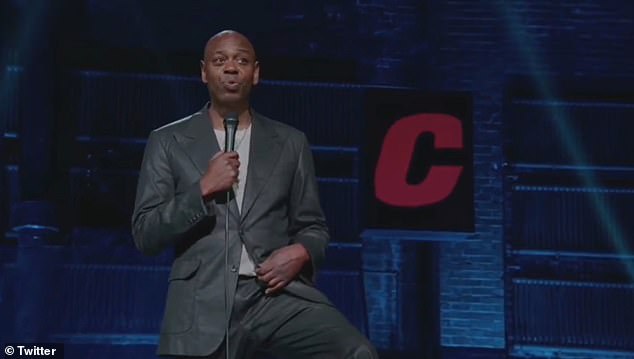 ‘At this point I feel like he poured his heart out in that special and no one noticed,’ she wrote.

‘What he’s saying to the LGBTQ family is, ‘I see you. Do you see me? I’m mourning my friend in the best way I know how. Can you see me? Can you allow me that?’

‘This was a call to come together, that two oppressed factions of our nation put down their keyboards and make peace. How sad that this message was lost in translation.’ 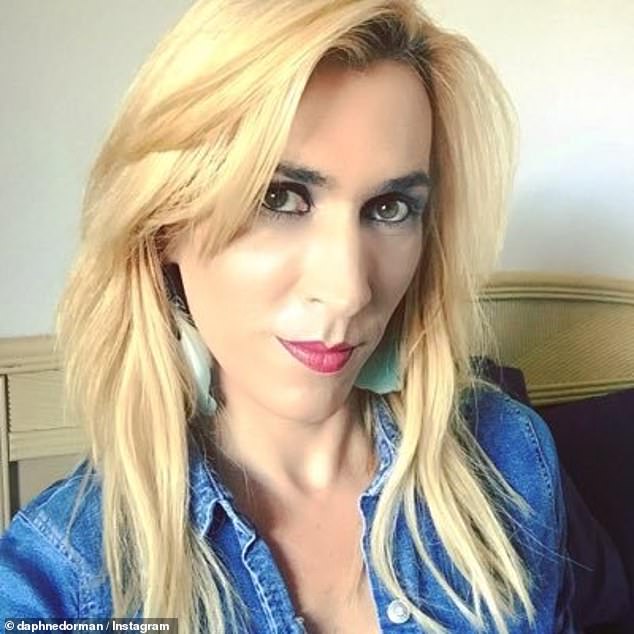 ‘No one knows what life was like for my siblings and I. We are products of how we were brought [up].

‘Dave was the biggest bright spot for Daphne; she was enamored for the first time. Blaming Dave is beyond the wrong thing to do. He helped her and let her be comfortable while talking with him.

‘She had many demons; Dave Chappelle was NOT one of them.’

‘The man loved my sister and felt empathy towards her human experience and, yes, he makes terrible jokes that are also funny,’ also added.

‘News flash, our whole family does that. Our funerals are laughter through tears, we mourn by remembering the times we laughed together, and yes, some inappropriate humor, too.

‘As often as Dave stands up for Daphne, we will be there for Dave. This man is our tribe, and we mourn alongside him.’

The comedian received backlash for his comments in his special The Closer where he stated he was ‘Team TERF’ in response to similar comments made by Harry Potter author JK Rowling.

The term TERF stands for trans-exclusionary radical feminist, which is a type of feminist who excludes the female trans community from their advocacy of women’s rights.

Trans-exclusionary feminists believe transgender women should not automatically have all the same rights as cisgender women – women who identify as the gender they were born as.

Flare-up points include whether trans women should be allowed into segregated spaces such as spas, or to compete against cisgender athletes in some sports.

‘Effectively, she said gender was a fact, the trans community got mad as f**k, they started calling her a TERF,’ he said in reference to Rowling’s cancellation. 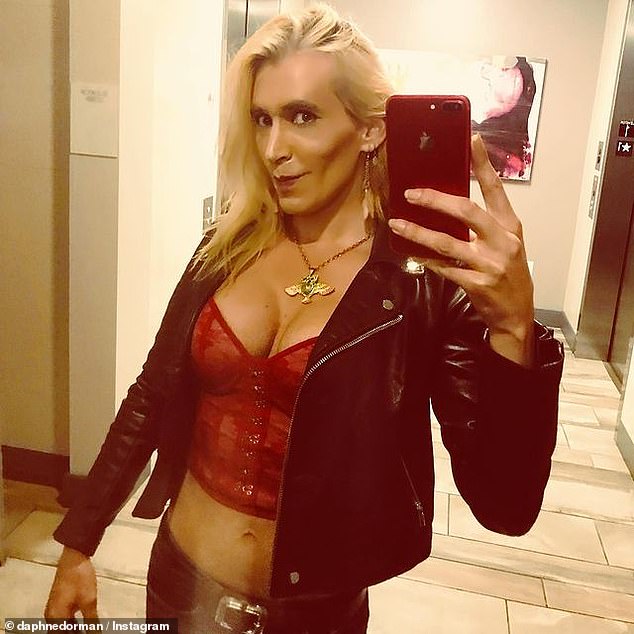 Chappelle had become friends with Daphne Dorman during their time working in comedy together.

Dorman had opened for one of Chappelle’s acts in San Francisco and openly laughed at his material which some deemed to be transphobic.

She even took the time to make an online post in defense of Chappelle’s jokes.

‘Punching down requires you to consider yourself superior to another group,’ she wrote.

‘He doesn’t consider himself better than me in any way. He isn’t punching up or punching down. He’s punching lines. That’s his job and he’s a master of his craft.’

She made a final apology to her fans on a Facebook post before she committed suicide in October 2019.

Dorman’s sisters then took the time to post messages in Chappelle’s defense after negative comments were being directed at him in response to her suicide.

‘After she committed suicide, all I saw all over social media was Dave Chappelle-bashing,’ she said. “I commented on so many posts, which is something I do not do. I commented to defend Dave,’ Becky had written. 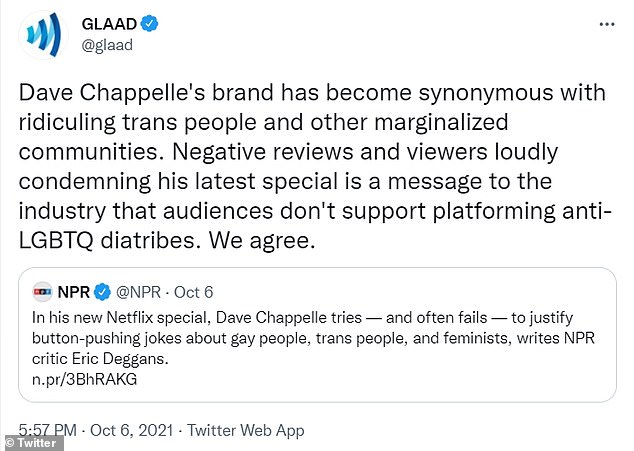 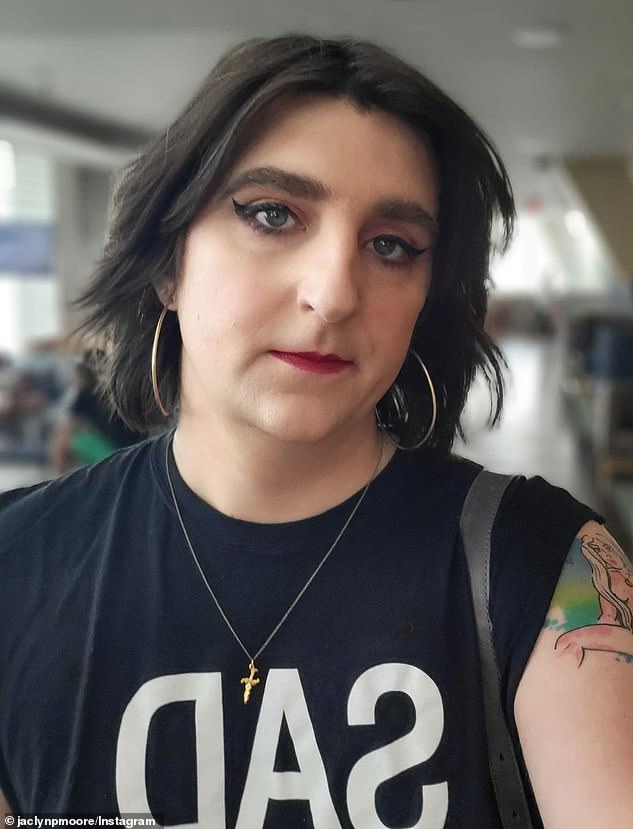 Jaclyn Moore, pictured, a trans showrunner on another Netflix show said she will no longer work for the streaming service following Dave Chappelle’s allegedly ‘transphobic’ remarks 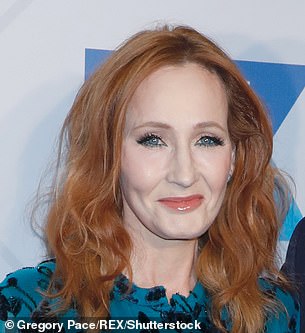 Other LGBTQ advocacy groups have slammed Chappelle for his comments, including GLADD and a showrunner from the hit Netflix series Dear White People.

In a tweet from GLADD, the organization wrote: ‘Dave Chappelle’s brand has become synonymous with ridiculing trans people and other marginalized communities.

‘Negative reviews and viewers loudly condemning his latest special is a message to the industry that audiences don’t support platforming anti-LGBTQ diatribes. We agree.’ 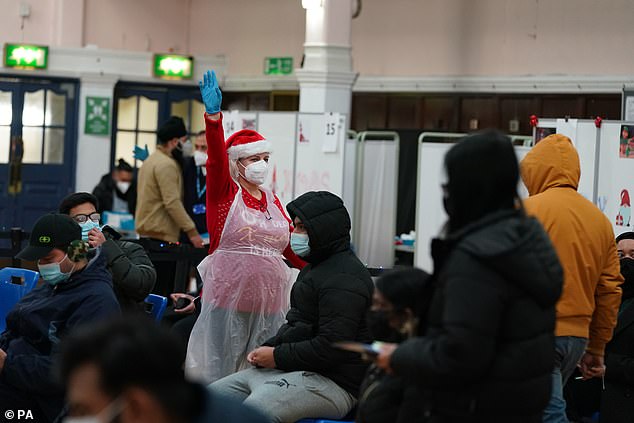 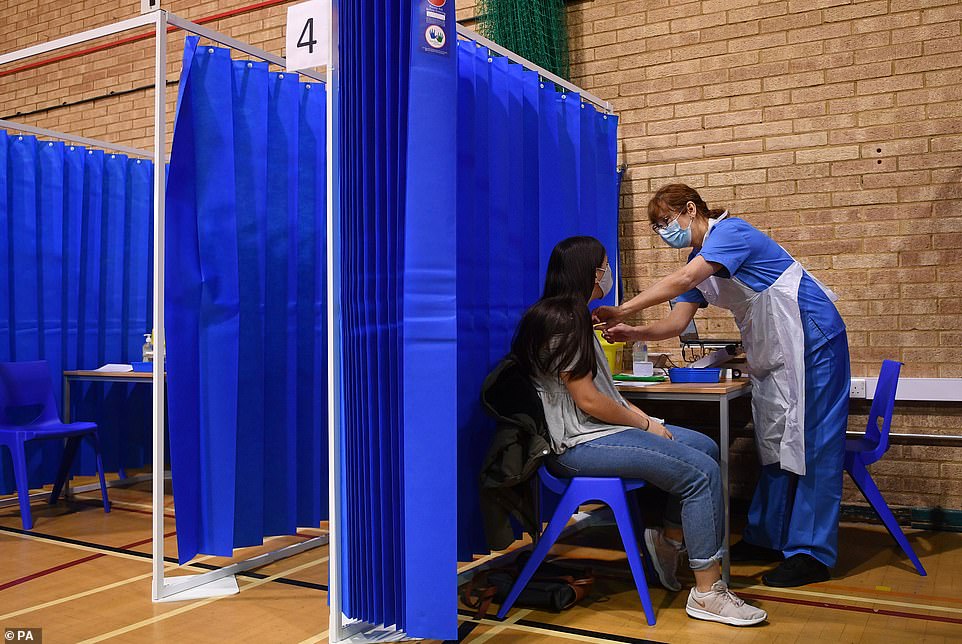 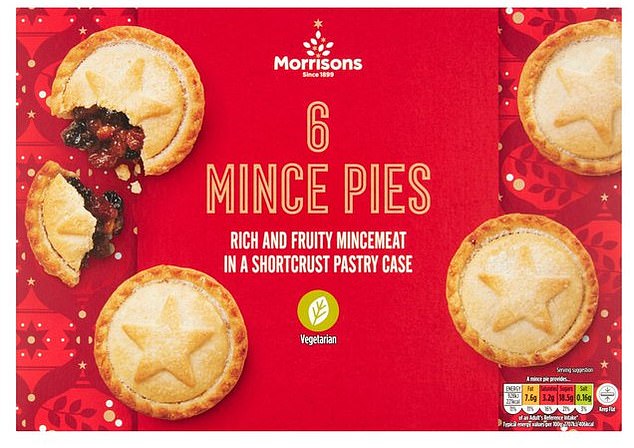 Which supermarket’s Christmas desserts contain the most sugar? 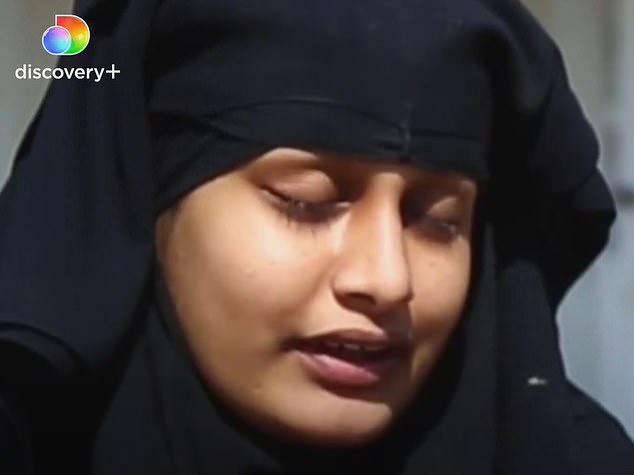 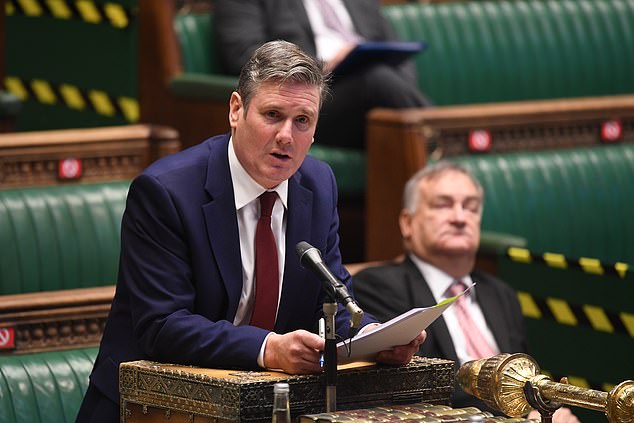 Jeremy Corbyn divides Labour again as he returns without Whip 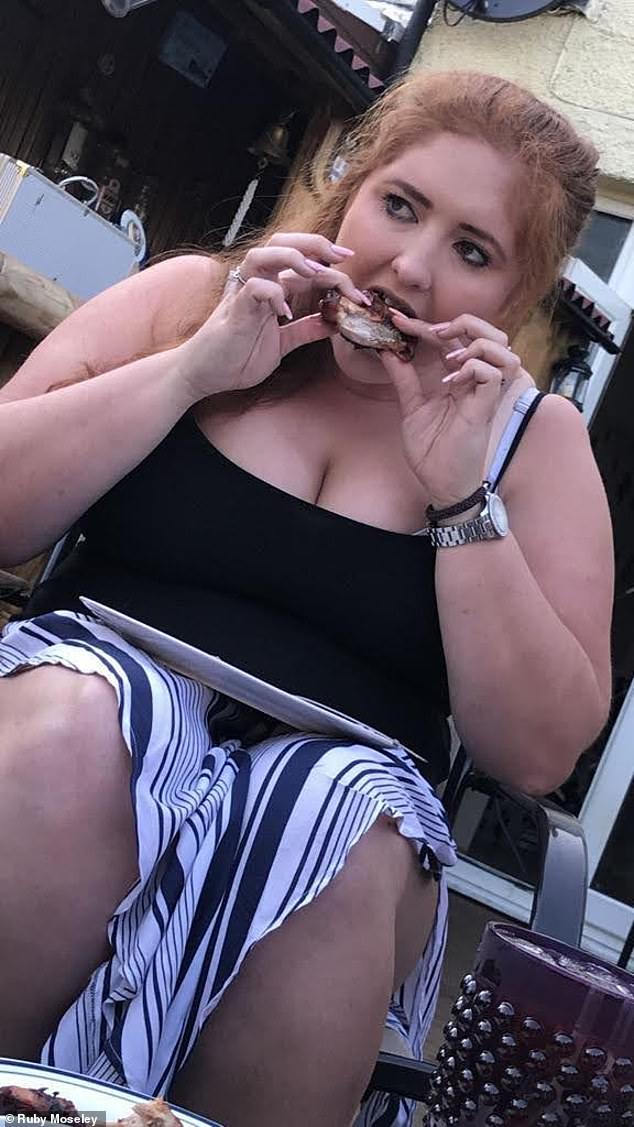 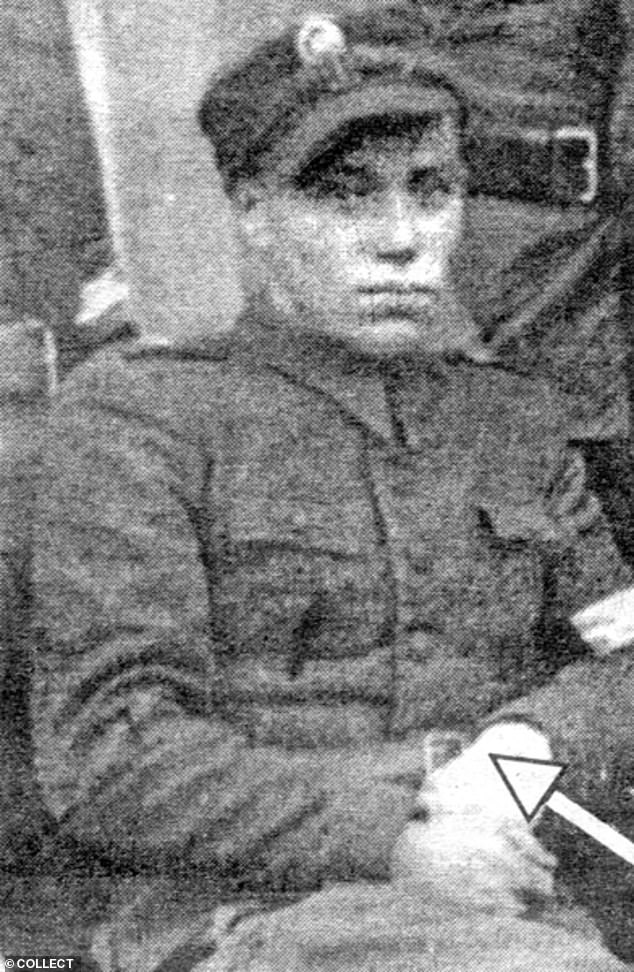