Insulate Britain today defied a court injunction to block the M25 for a sixth time – as they taunted drivers already suffering from a fuel crisis by saying, ‘You can throw as many injunctions at us as you like’.

The hated mob formed a barricade at Junction 14 by Heathrow Airport, with between 30 and 40 protestors arriving at around 8am before being hauled onto the verge by police.

Its hypocrite spokesman Liam Norton – who became a national laughing stock laugh week after storming off Good Morning Britain when he was quizzed on claims his own home hadn’t been insulated – vowed he and his fellow eco loons ‘aren’t going anywhere’.

He said: ‘You can raid our savings and confiscate our property. You can deny us our liberty and put us behind bars. But that is only shooting the messenger. The truth is that this country is going to hell unless you take emergency action to stop putting carbon into the air.’

The 36-year-old plumber extraordinarily compared himself to Sir Winston Churchill – as he refused to reconsider the group’s tactics even after a son said he wanted his mother suffer a stroke that left her paralysed after being caught up in six hour delays. 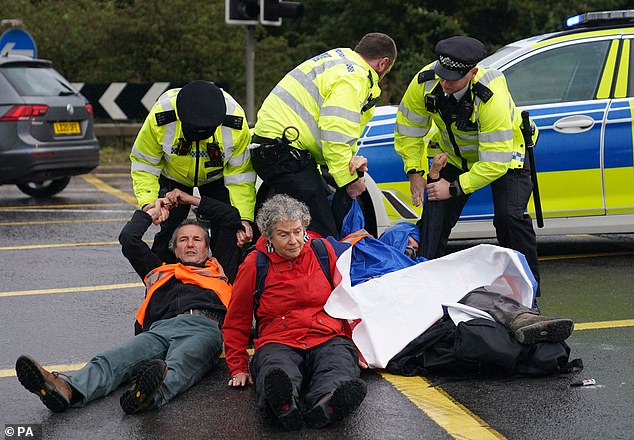 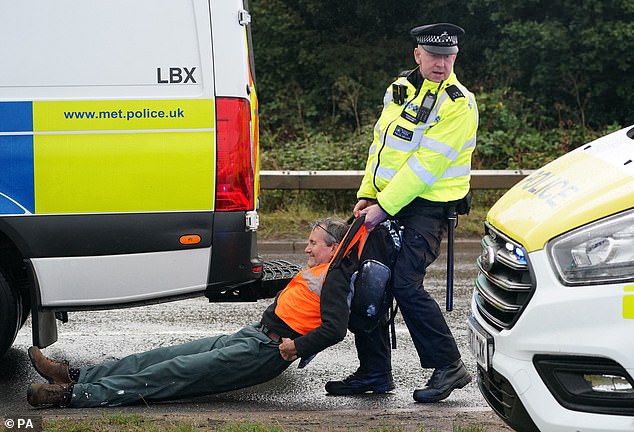 The hated mob loaded fresh misery onto drivers with yet another selfish protest today, with 52 activists involved, according to a press release

The rabble, an offshoot of Extinction Rebellion, is calling for the Government to insulate homes in the UK to help cut carbon emissions.

Their selfish tactics have led to National Highways being granted injunctions to prevent people obstructing the M25 and A20 following further demonstrations at the Port of Dover on Friday.

The injunctions mean demonstrators could face time in prison for blocking the routes.

Asked about whether the group was happy to break a court injunction, Tracey Mulligan told LBC:  ‘I wouldn’t say we are happy, we are just putting things into the bigger context.

‘We are tired of over seven million people having to choose between heating or eating and we know that’s going to get worse with the energy crisis that we’re facing now.’

The Met said: We’re attending a protest at Junction 14 of the M25 near Heathrow Airport where activists are blocking traffic on a slip road.

‘We are on scene and have opened one lane of the carriageway. Arrests are being made – we will share updates shortly.’ 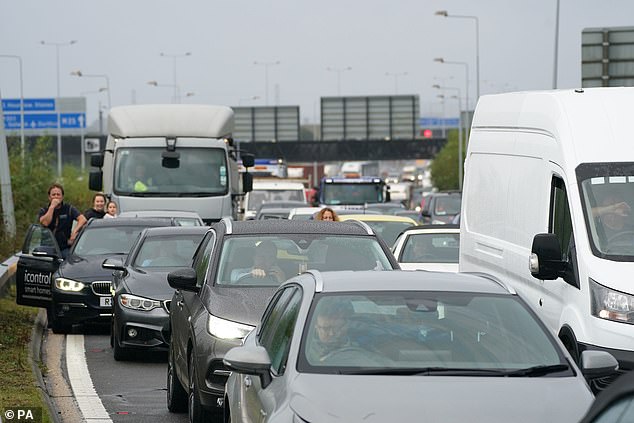 Today’s protest could not come at a worse time for motorists, as panic buying combined with the HGV driver shortage led to up to nine in ten forecourts running dry.

Drivers queued for four hours or more in lines stretching for miles as it was revealed  could call in the Army to deliver petrol and diesel to petrol stations across Britain amid a crisis that has seen competition laws suspended to allow businesses such as Shell and BP to share drivers.

A lack of fuel has led to a mass return to working from home today, just weeks after the Government lifted most coronavirus-related legislation to get more people into the office.

TomTom traffic data revealed that congestion is down today in all major cities.

Schools have said they will return to the online classrooms used in lockdown if teachers can’t get to work – with some parents also unable to drive – while many petrol stations are now prioritising NHS workers in special two-hour slots where they must show ID to fill up. 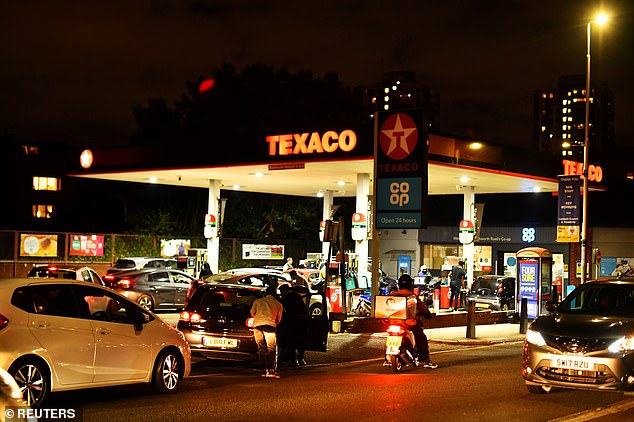 People push as a car, which has run out of petrol, the final few meters on to the forecourt as vehicles queue to refill at a Texaco fuel station in south London this morning

One school in Surrey wrote to parents over the weekend saying: ‘The current petrol crisis could potentially disrupt school next week.

‘The ability of staff and pupils to get to school may be compromised and there may also be issues with our food deliveries.

‘Clearly, we have no desire to go back online so soon after the challenges of the last couple of years but we cannot exclude the possibility that it may be necessary’.

One headteacher tweeted: ‘This is actually going to be a problem. I don’t have any fuel myself and all the stations in my area are out of diesel. Most of my teachers commute further than ten miles to work’.

Desperate motorists have even started following fuel delivery drivers to petrol stations, earning the nickname ‘tanker w***ers’ from critics, as panic buying continues across the UK with fights even breaking out at the pumps.

One Twitter user said: ‘My brother in law is a lorry driver and delivers fuel. He’s on the road now and there are people following him – literally tracking his every turn – in cars. He says it’s like end of days’. He added: ‘I worried it might be really scary for him, but he just thinks they’re all kn*bs’.

Ministers will consider drafting in troops to deliver petrol and diesel later this week if panic-buying persists, sources said, after Government officials gave the green light for plans to bring in 5,000 foreign lorry drivers to deal with the shortage. 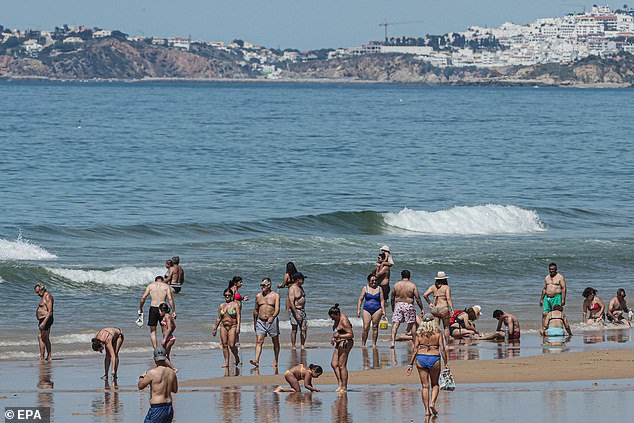 Tokyo Olympics: German judo athlete Martyna Trajdos defends her coach after he shook and slapped her 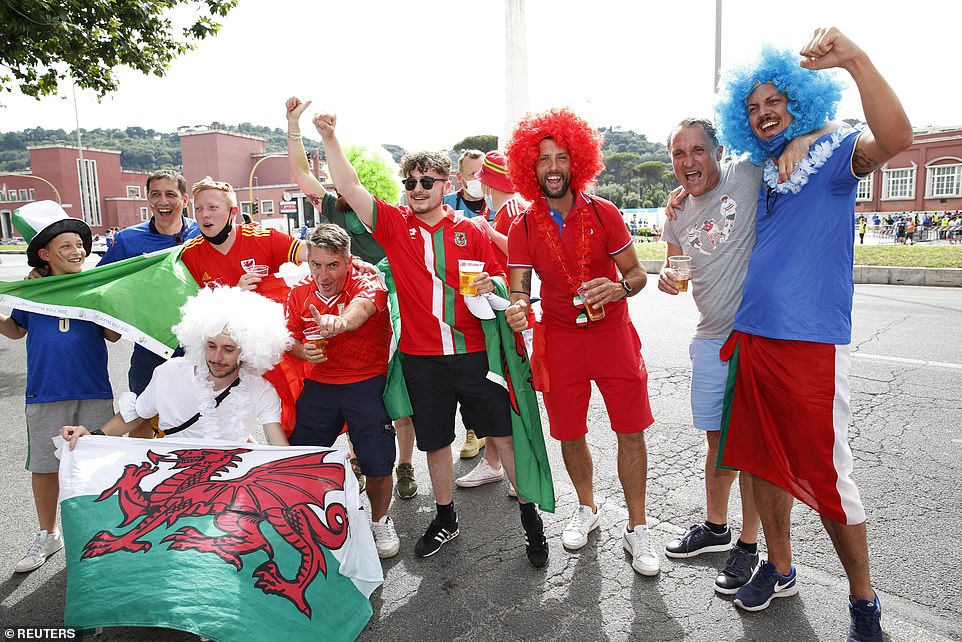 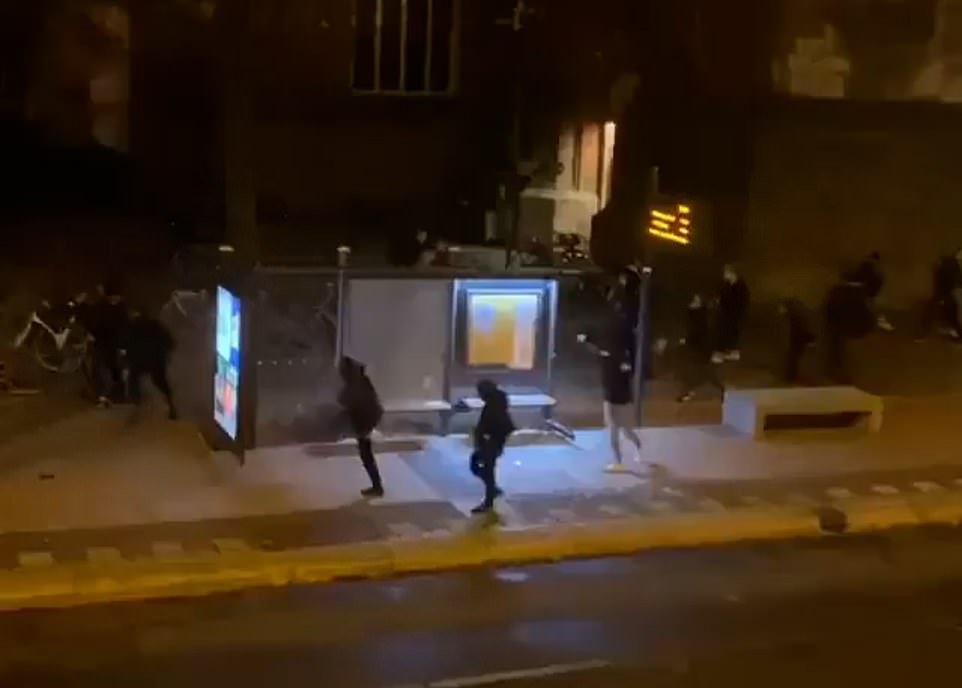 THIRD night of violence on streets of Europe over Covid clampdowns 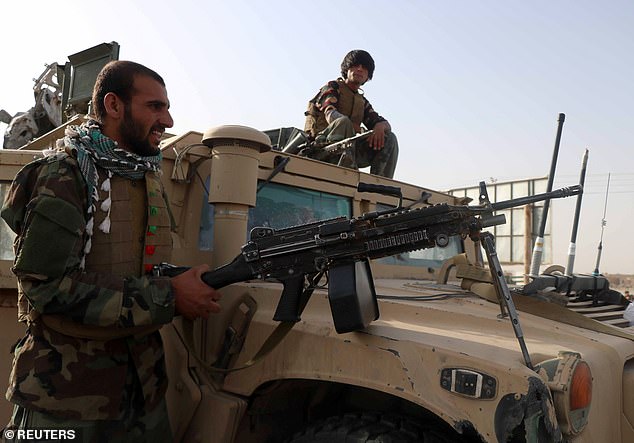 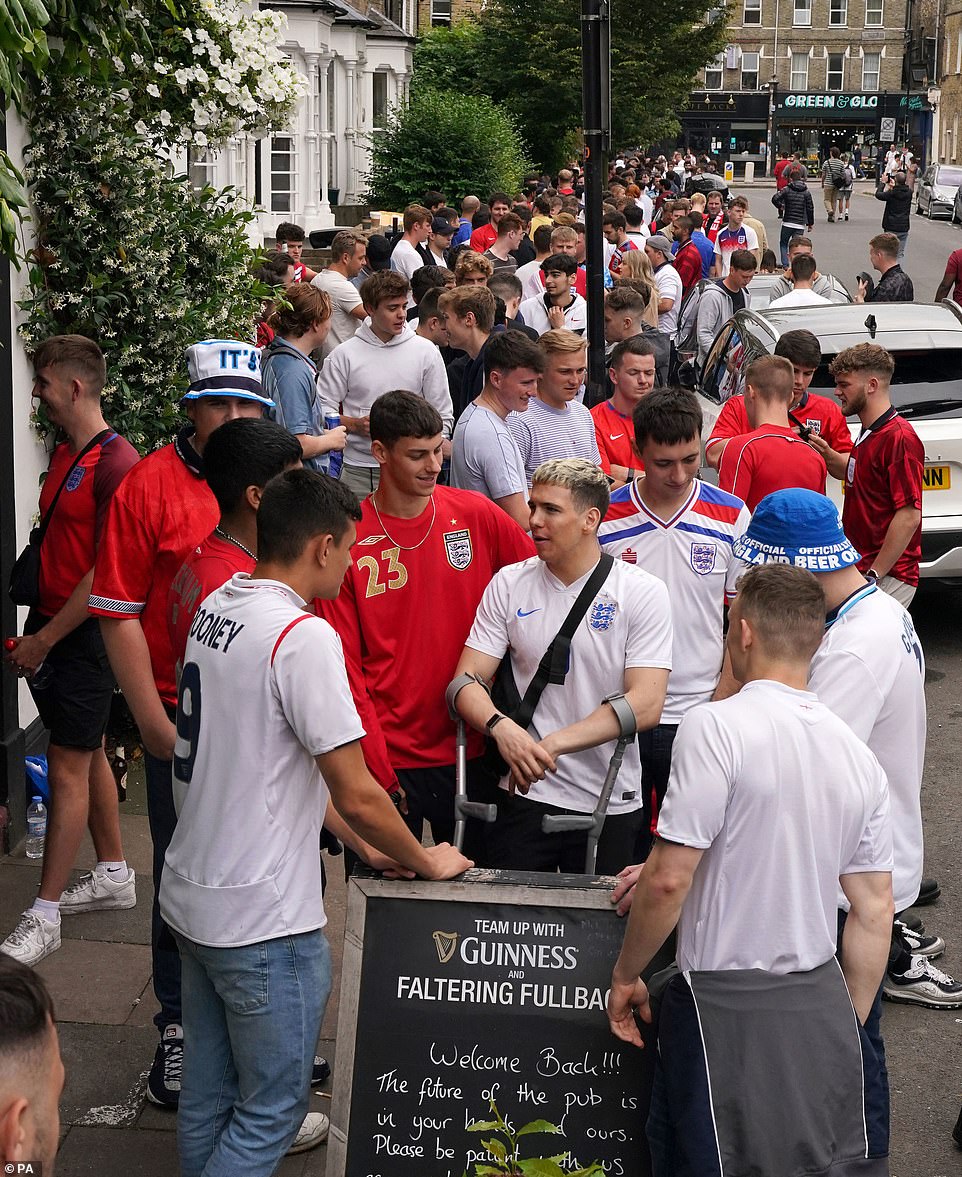 England v Italy: Fans gather outside pubs and bars ahead of tonight’s Euro 2020 final at Wembley 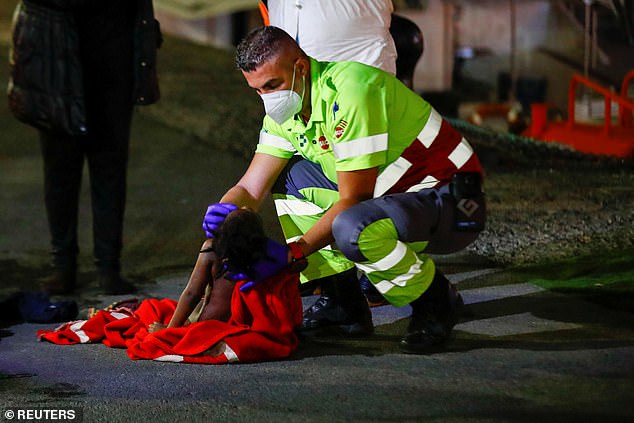 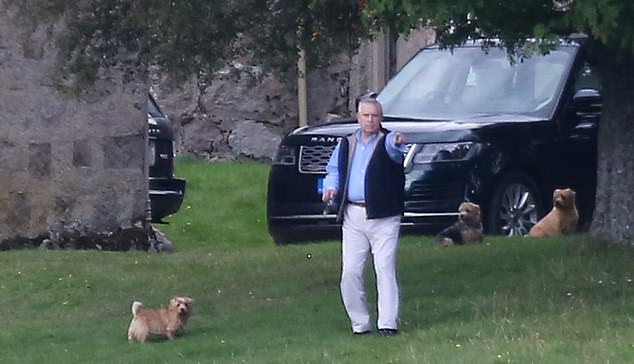