R. Kelly can be heard telling one woman that he will ‘f*** her up’ if she ‘lie[s]’ to him’ and another that he will come to her home state to make ‘something happen to [her]’ if she ever ‘takes from [him] again’ on tapes approved for courtroom use on Tuesday.

A judge approved prosecutors’ requests to play the tapes, which they say demonstrate his pattern of violently threatening his victims, for the jury in the R&B singer’s trial that started on August 18.

Kelly’s defense team could not immediately be reached for comment.

Kelly, 54, has repeatedly denied accusations that he led a criminal enterprise that sexually exploited women, girls and even boys during a 30-year career. His lawyers have portrayed his accusers as groupies who are lying about their relationships with him.

R. Kelly can be heard on recording telling one woman that he will ‘f*** her up’ if she ‘lie[s]’ to him’ and another that he will come to her home state to make ‘something happen to [her]’ if she ever ‘takes from [him] again,’ said court documents. Here, Kelly sits between his defense lawyers Nicole Blank Becker and Thomas Farinella on September 14 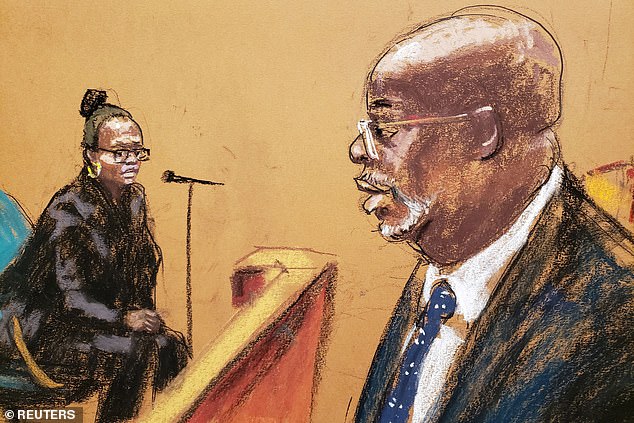 On one of the 2008 tapes, an enraged Kelly can be heard accusing an unidentified woman of lying to him before beginning to assault her, according to a court document filed in a federal court in Brooklyn on Tuesday. This courtroom sketch, drawn up on September 14, shows the twin sister of Kelly’s former assistant Suzette Mayweather being cross examined by Kelly’s defense lawyer

Kelly, 54, has repeatedly denied accusations that he led a criminal enterprise that sexually exploited women, girls and even boys during a 30-year career

On one of the 2008 tapes, an enraged Kelly can be heard accusing an unidentified woman of lying to him before beginning to assault her, according to a court document filed in a federal court in Brooklyn on Tuesday.

The star singer is captured on another recording berating a second woman from Florida, identified as a ‘Jane Doe’ he accused of stealing a Rolex watch from him, the filing says.

‘You better not ever… take from me again or I will be in Florida and something will happen to you,’ he says. ‘You understand what I´m telling you?’

Prosecutors had planned to call the Florida woman as a witness but decided against it after she ‘started to have panic attacks and appeared to have an emotional breakdown’ while listening to the tape in preparation for her testimony, the filing says.

The defendant bragged about having ‘cameras everywhere’ in his Chicago studio and other locations he used to keep an eye on his victims, it adds. 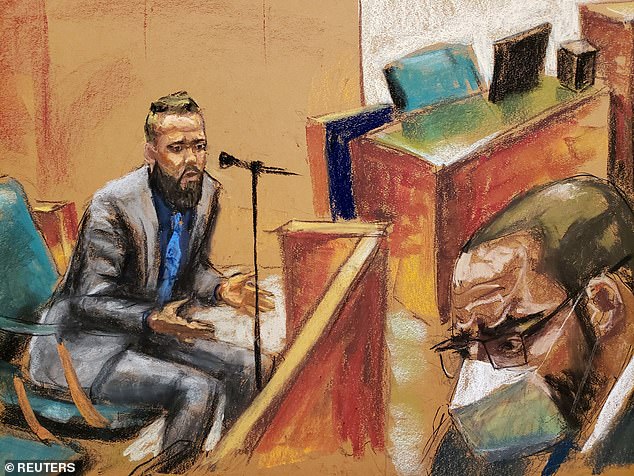 A judge approved prosecutors’ requests to play the tapes, which they say demonstrate his pattern of violently threatening his victims, on September 14. This courtroom sketch shows Nicholas Williams testifying on that day

The request was granted a day after the 10th witness called in the trial, who was introduced in Brooklyn Federal Court as ‘Angela,’ claimed that she once walked in on Kelly performing oral sex on Aaliyah Haughton when the singer was just 12 or 13 years old around 1993.

‘He asked me to climb on top of him,’ Angela said yesterday, adding that there were three other young women in various states of undress in the room with them. ‘I paused for a moment. I was a little startled.’

She claimed Kelly asked her to ‘straddle him and ride him.’ She said she did as she was told after putting a condom on Kelly. During the encounter, the singer also allegedly fondled the other young women who were present, according to Vulture.

Angela said she continued seeing Kelly every day for the next few years. She later dropped out of high school and began working as a backup dancer for him.

According to the woman, she and other dancers were expected to have sex with Kelly, reported the New York Daily News.

‘He told us we had to pay our dues. It was a requirement to be around,’ she said.

The witness also recounted how one time she and other women were riding in Kelly’s tour bus and decided to play a prank on him by throwing water on him.

Angela said she went to the back of the bus and slightly opened the door of a bedroom, revealing ‘Robert and Aaliyah in a sexual situation.’

According to the testimony, Kelly was kneeling before the teenage singer and his head was between her legs.

Angela said she then abruptly shut the door and never spoke to Kelly about what she allegedly witnessed.

Aaliyah was about 13 years old at the time of the alleged encounter. Two years later, Kelly, then 27, illegally married the young singer, according to previous testimony. She was killed in a plane crash in 2001 when she was 22 years old. 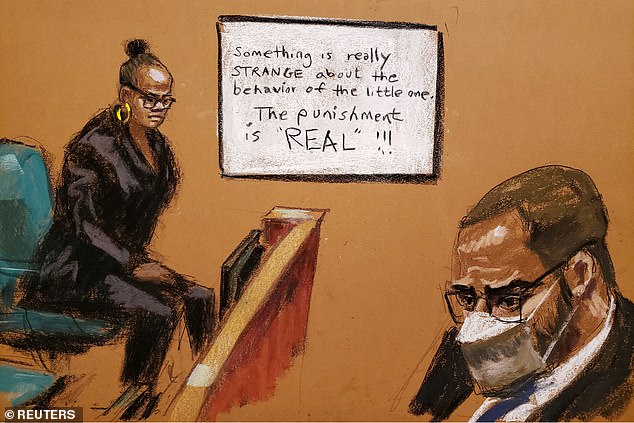 Copeland, who worked as an executive assistant for Kelly for 14 years, claimed that when he summoned her to his apartment in Trump Tower in Chicago in 2019, after she had already quit her job, one of the hip hop star’s girlfriends, Jane, made her change into a robe in order to prove that she was not wearing a wire.

‘Jane gave me a robe to put on. She asked me was I wired,’ Copeland told the jury in Brooklyn Federal Court. ‘I was shocked and I said no.’

Copeland said she removed the sweatshirt she was wearing and put on the robe over her tank top.

Diana Copeland, Kelly’s former aide, testified that one of his girlfriends made her change into a robe during a 2019 meeting at Trump Tower so Kelly could see that she was not wearing a wire

She said Kelly, 54, facing allegations of sexual abuse, asked her to write a ‘truthful’ letter, stating that he never verbally, physically or mentally abused anyone.

Copeland said in court that what she should have written instead was that she never witnessed him commit abuse.

The ex-aide said that years prior, Kelly had made her write a false confession, claiming that she had stolen money from him.

Under cross-examination, Copeland denied some of the claims that Kelly’s alleged victims had made during the trial, insisting that the women were not required to ask for permission to use the bathroom, were not denied food or locked in rooms for days.

In her testimony on Friday, however, Copeland claimed that a few years before Kelly’s 2019 arrest, the singer asked her why she had let one girlfriend ‘escape’ his apartment.

Copeland painted a portrait of Kelly as a controlling man who would not let his girlfriends ride in an Uber driven by a man.

The former aide said should would have to keep ordering ride-shares until a female driver arrived.

In an effort to limit his girlfriends’ interactions with other men, Copeland testified that he instructed them to turn around in public places, such as stores and elevators, so as not to meet a man’s gaze.

Copeland recounted how one time she inadvertently left Kelly’s girlfriend in an elevator because the woman had turned to face the back wall when a man walked in, and she did not see Copeland leave.

The long-time former assistant said she could move about his house relatively freely, but she was expected to knock on walls ‘to make sure that I announced my presence.’

She noted that Kelly expected everyone in his circle to knock on doors before entering: a rule that was put in place by the singer’s ex-wife.

Copeland said that despite countless arguments that led her to quit as Kelly’s assistant several time, she repeatedly went back to working for him because she felt ‘he didn’t have trustworthy employees.’

Copeland claimed that the award-winning singer did not control his bank account, did not know his own Social Security number, and struggled with reading and writing.

Copeland was the fifth former employee of Kelly’s to testify against him since the beginning of the high-profile trial on August 18. 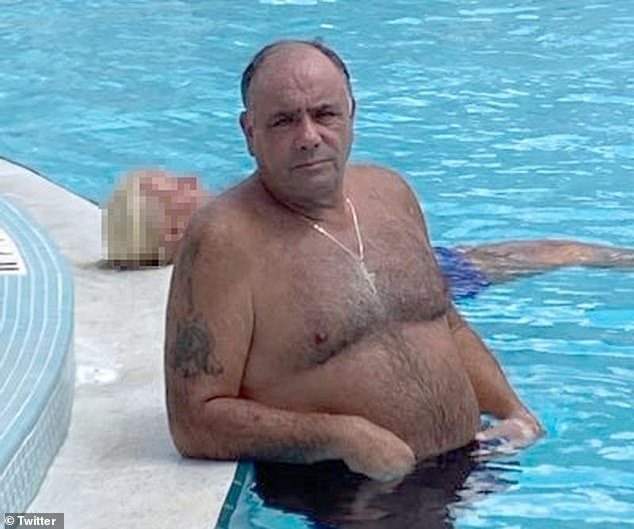 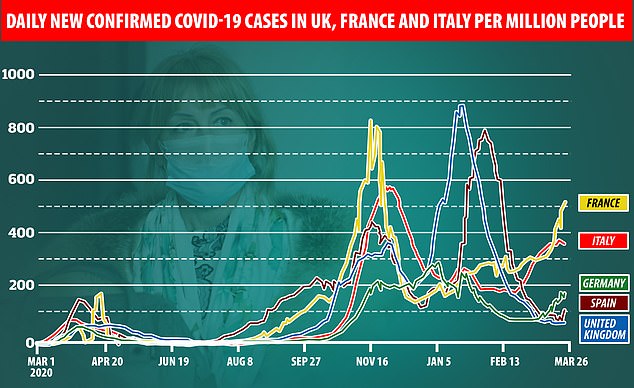 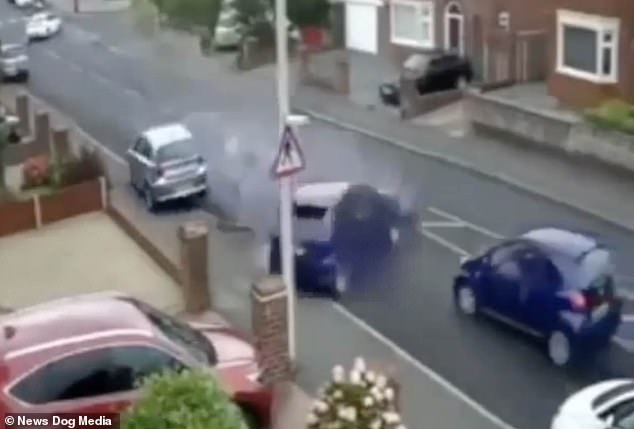 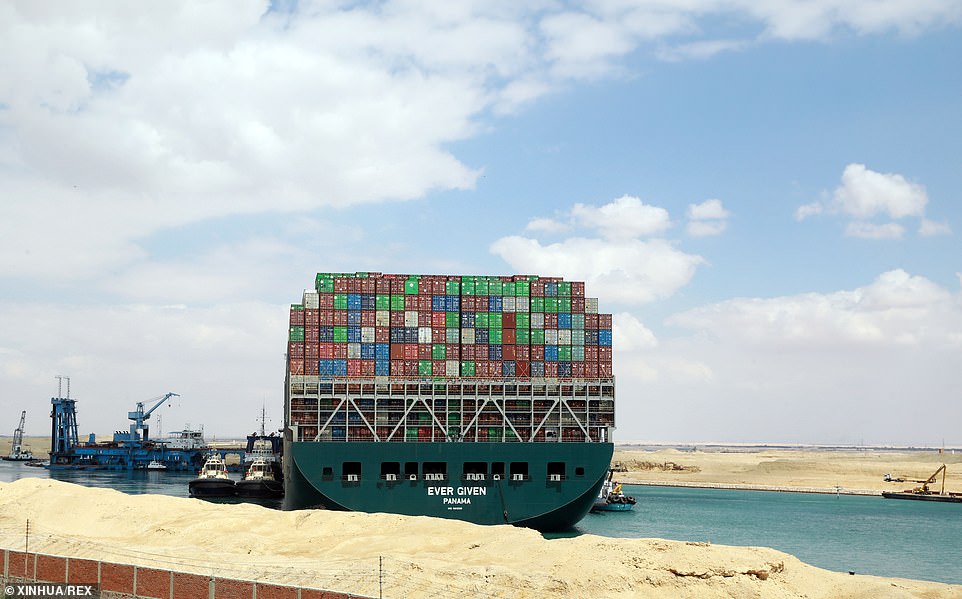 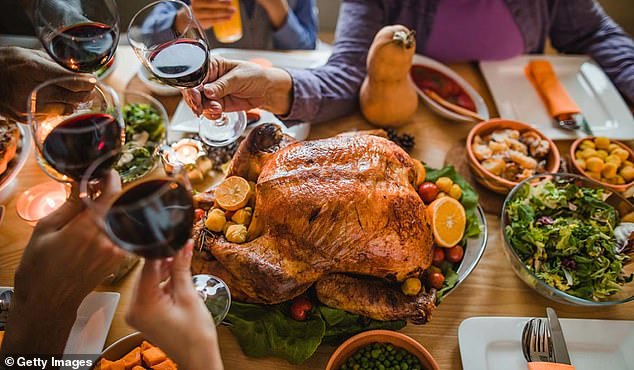 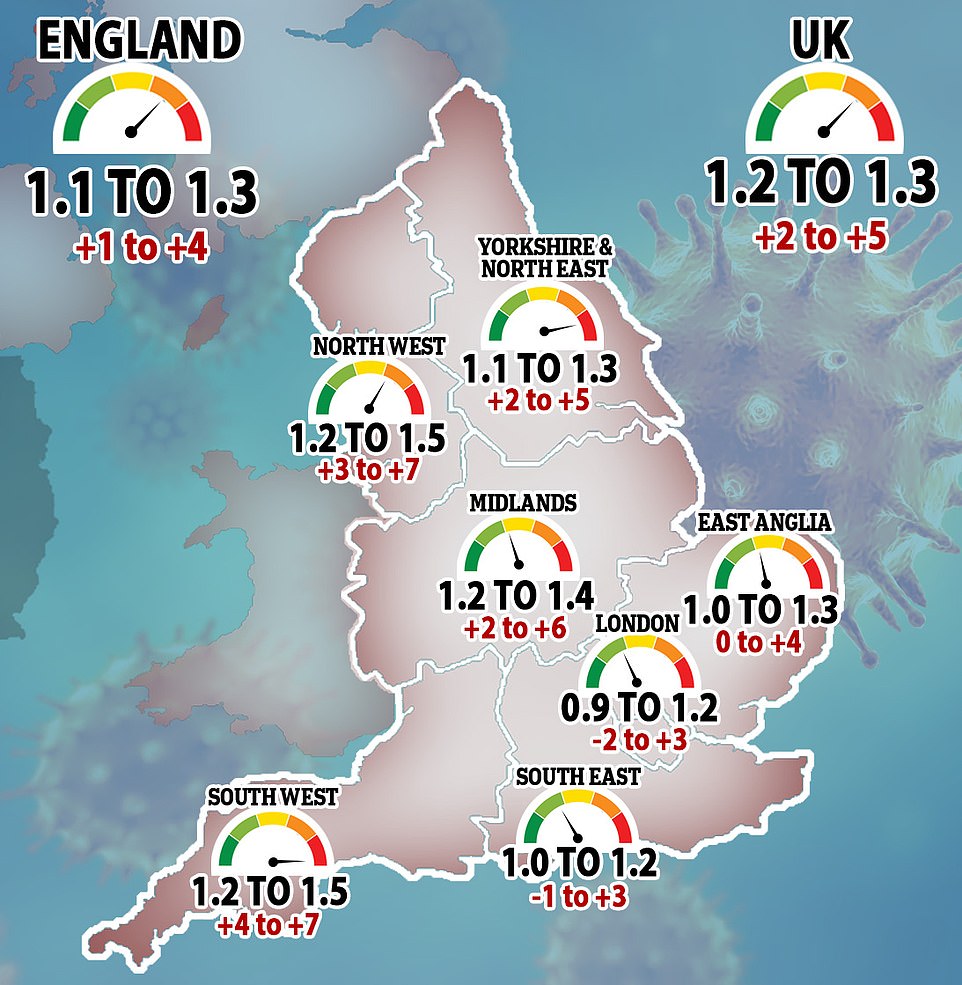 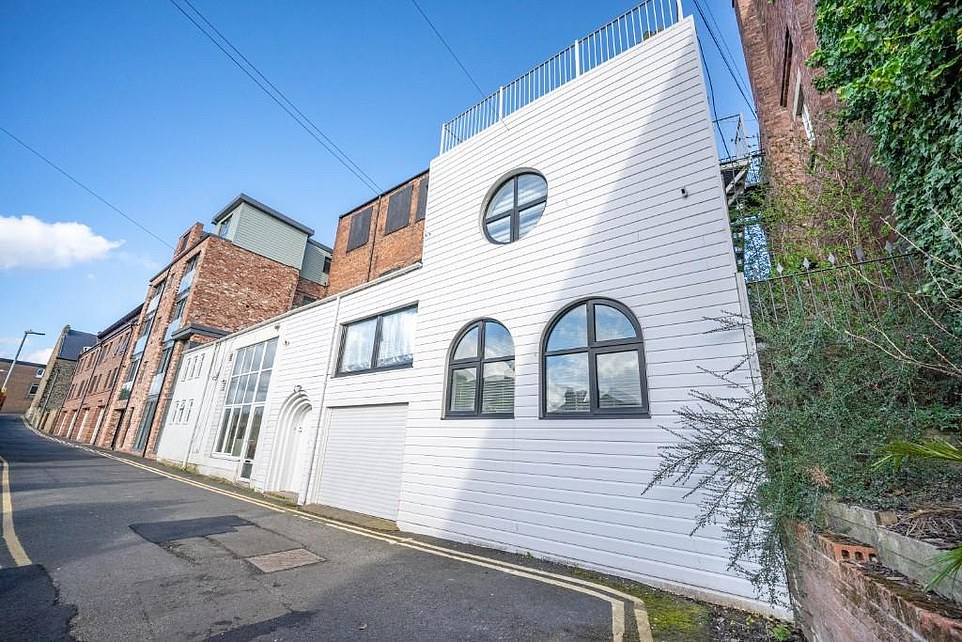 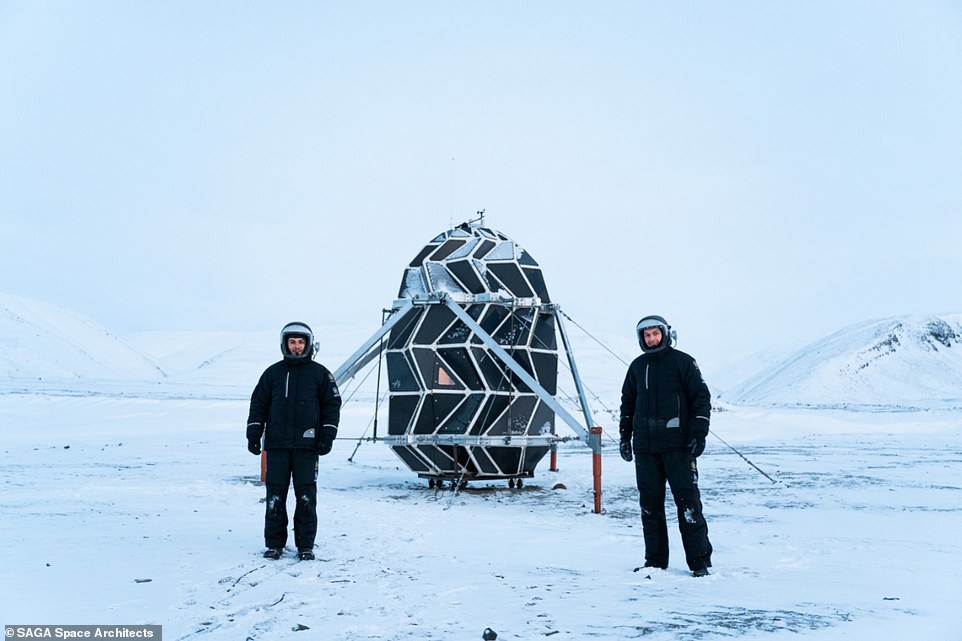