has compared the massive mechanical arms intended to hoist  Starship and its Super Heavy booster rockets onto launch pads to ‘robot chopsticks’ attempting to catch the ‘the largest ever flying object.’

The SpaceX CEO , along with a clip from 1984’s The Karate Kid, showing stars Pat Morita and Ralph Macchio attempting to catch a fly with chopsticks.

‘Success is not guaranteed, but excitement is!’ Musk added.

Responding to follow-up tweets, Musk said he hoped the first attempt at using ‘Mechazilla,’ his nickname for the three-armed building-sized robot,’ would come with the launch of Booster 5.

A launch date for Booster 4 hasn’t been set, but SpaceX stacked Starship onto Super Heavy , creating a 400-foot craft that is the tallest rocket in history.

Two days earlier, Musk of a giant crane hoisting Booster 4, including its 29 massive Raptor engines, onto the pad, noting ‘Mechazilla will do this for future rockets, but it’s not quite ready.’ 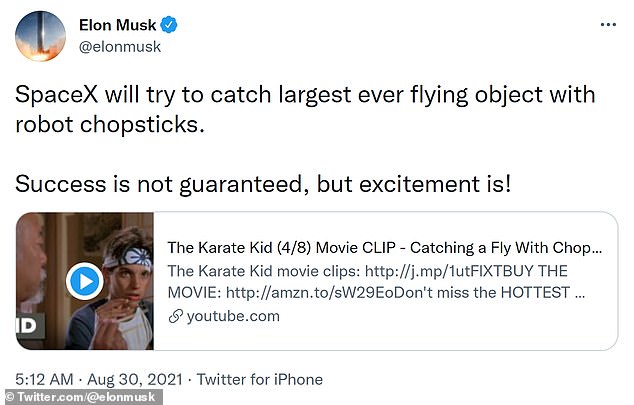 Elon Musk compared Mechazilla’s robotic arms recapturing booster rockets and Starships to trying to  ‘catch largest ever flying object with robot chopsticks,’ a reference to an infamous scene in 1984’s The Karate Kid

Work on Mechazilla has been underway since the end June: The first of the trio, a quick-disconnect or QD swing arm, was installed on the exterior of Starship’s mammoth launch tower the weekend of August 29.

It’s expected to deliver fuel, oxidizer, and other consumables, as well as physically stabilize the booster for the stacking procedure.

To reach Musk’s incredibly ambitious goal of putting a million humans on Mars by the mid-2020s, Musk calculated that his Starship rockets would need to conduct roughly three flights a day every day of the year.

Having working mecha-arms that can quickly turn around boosters and Starships will help with that objective, and be less dependent on weather conditions than retrieving them from the ocean. 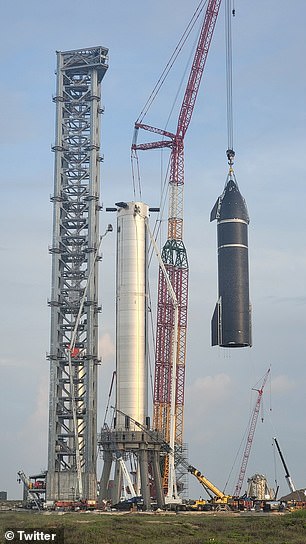 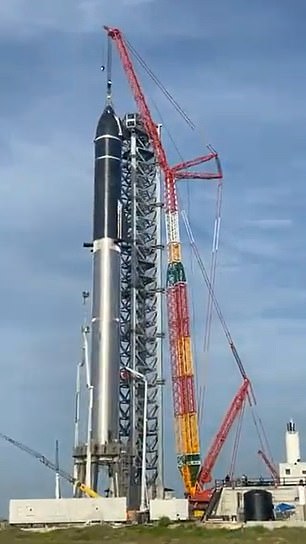 Elon Musk’s SpaceX stacked its Starship onto of the Super Heavy booster for the first time on August 6. The combined craft measures a towering 400 feet, making it the tallest rocket ever

‘By replacing a tower crane with giant arms, SpaceX will hopefully be able to stack Starship on Super Heavy (and Super Heavy on the launch mount) even in the high winds that are almost always present on the South Texas Gulf Coast,

‘If SpaceX can also reliably catch boosters with those arms, it could be a significant upgrade for the operations side of Starship reusability.’

After Super Heavy was brought to the SpaceX launchpad in Boca Chica, Texas, a massive crane picked up Starship Serial Number 20 (SN20) and slowly lowered it on top.

Super Heavy is the first stage of SpaceX’s two-stage, fully reusable Starship system, intended to send humans and cargo to Mars and other distant planets. 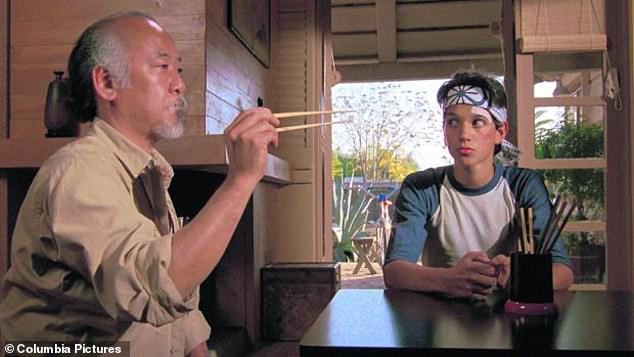 Mr. Miyagi (Pat Morita) shows Danny (Ralph Macchio) how to snatch a fly out of the air using chopsticks in 1984’s The Karate Kid

The upper, or second stage, is the 165-foot-tall Starship.

The Super Heavy, also known as Booster 4, is set to perform a series of pressurization and engine tests, and if all goes to plan, will eventually launch with SN20 at its helm, reported.

SpaceX has yet to announce a date for its launch, but with the Federal Communications Commission targets a six-month window starting June 20, 2021.

The company still has to get clearance on an environmental review from the Federal Aviation Administration, which could take months.

The filing also revealed how the orbital launch would play out—starting with the Super Heavy Booster taking off and firing for 169 seconds, before allowing Starship to break free and start its own journey, . 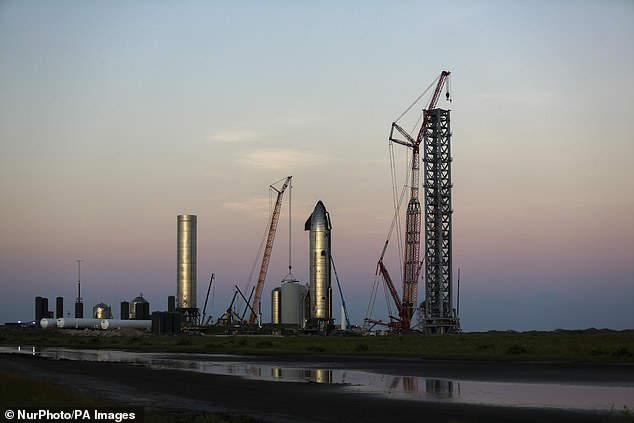 SpaceX fully stacked Starship and Super Heavy Booster on August 6, 2021, resulting in the largest space craft ever made.  This shot from August 23 shows SN15 and SN16 sitting behind the build site, with attachment of the first retractible arm to the orbital launch tower still a few days away

The booster would ‘softly land’ in the Gulf of Mexico, according to the filing, about 20 miles from shore.

Starship would use its Raptor engines to soar into orbit and splash down in the Pacific Ocean, 62 miles northwest of Kauai, Hawaii.

SpaceX has completed several tests on the 160-foot Starship upper stage—the most recent, SN15, landed on the launchpad after a short high-altitude flight.

However, the next launch will be the first test of the full Starship system, including the booster stage.

Eventually, the plan is for Mechazilla to catch the giant boosters as they fall away and even retrieve Starship itself. 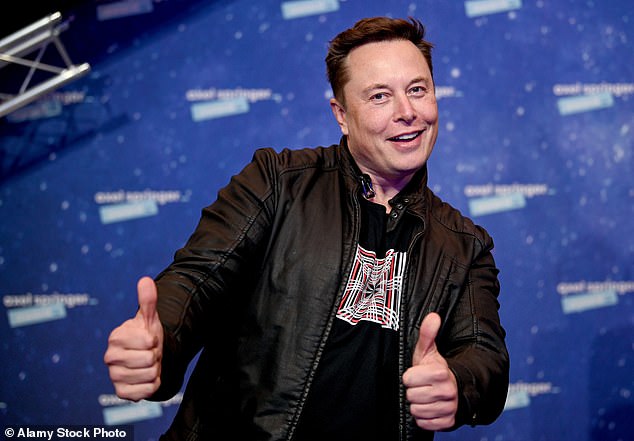 While the Super Heavy booster has fins to latch onto, a Twitter user asked Musk what the arms will grab to retrieve the ship, writing, ‘Will it be upper flap wings?’

Musk said the boosters have two pins for lifting and catching, ‘although maybe it’s better to modify grid fins to take more load.’

For Starship, ‘something will need to flip out from the leeward side of the top of the ship to do the same there,’ Musk tweeted.

‘Maybe it’s part of the forward flaps, but probably not,’ he added. ‘Different solutions for different load paths.’

In 2020, Musk told SpaceX employees that Starship progress was a top priority, with progress accelerating ‘dramatically and immediately.’

That resulted in a rapid increase in Starship prototypes, often with successive models ready before the previous one had even been tested.

Test flights have ranged from static firing the engines to launching up to six miles into the air and attempting to return to the launchpad. 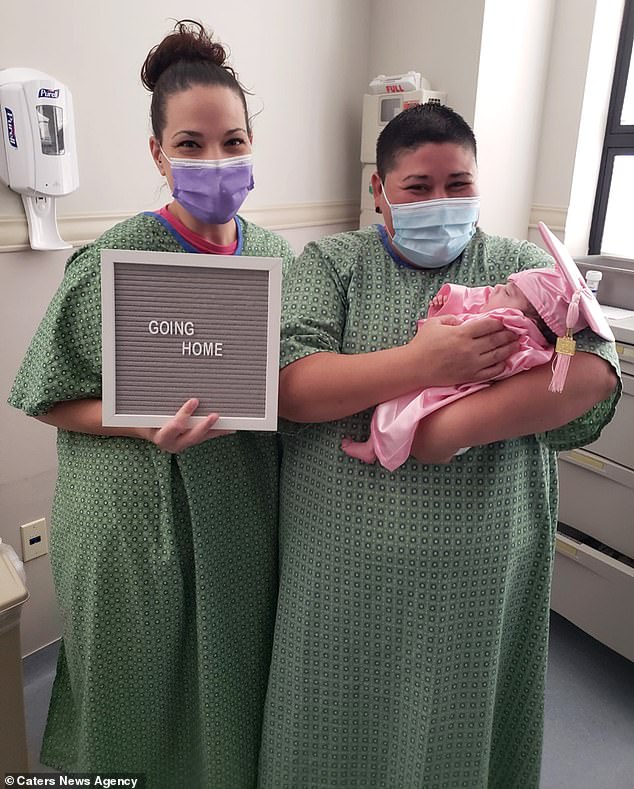 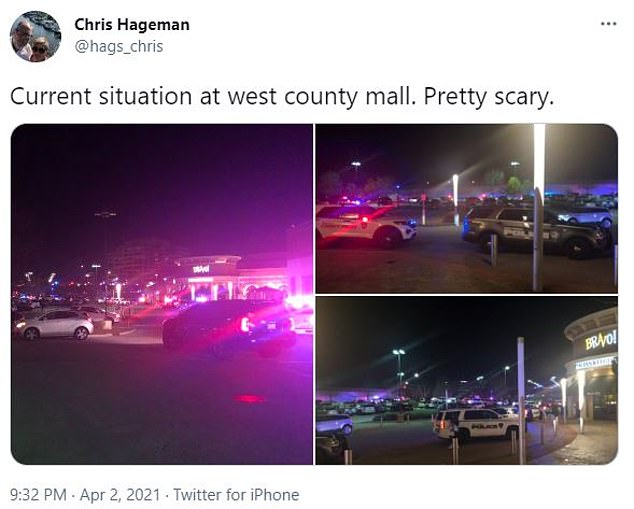 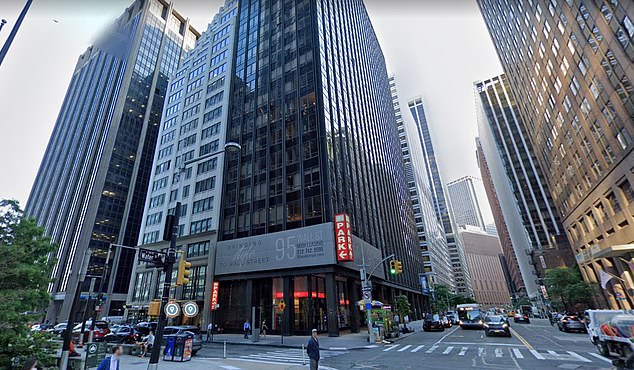 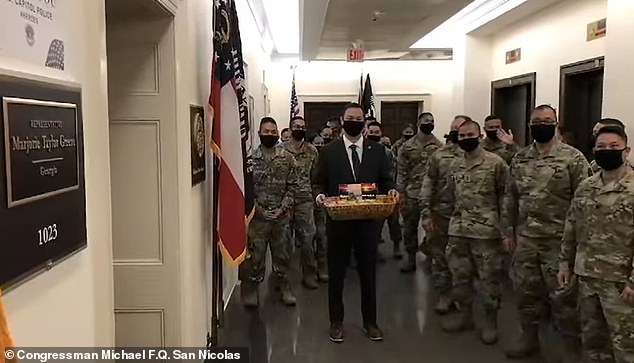 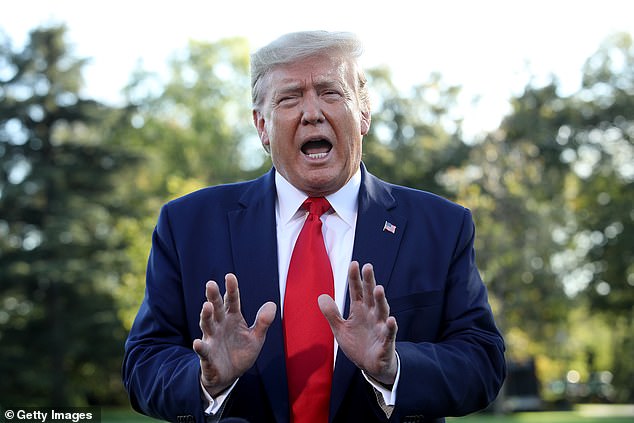 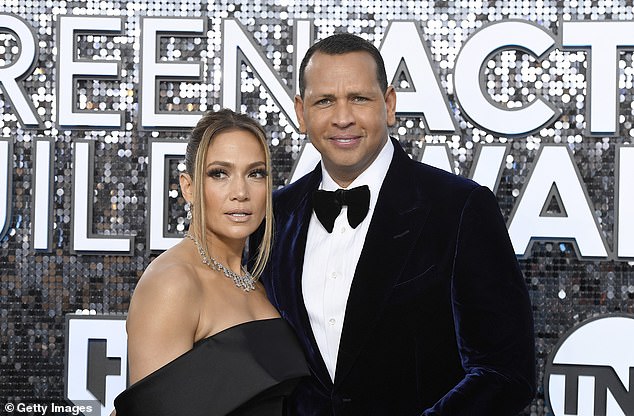 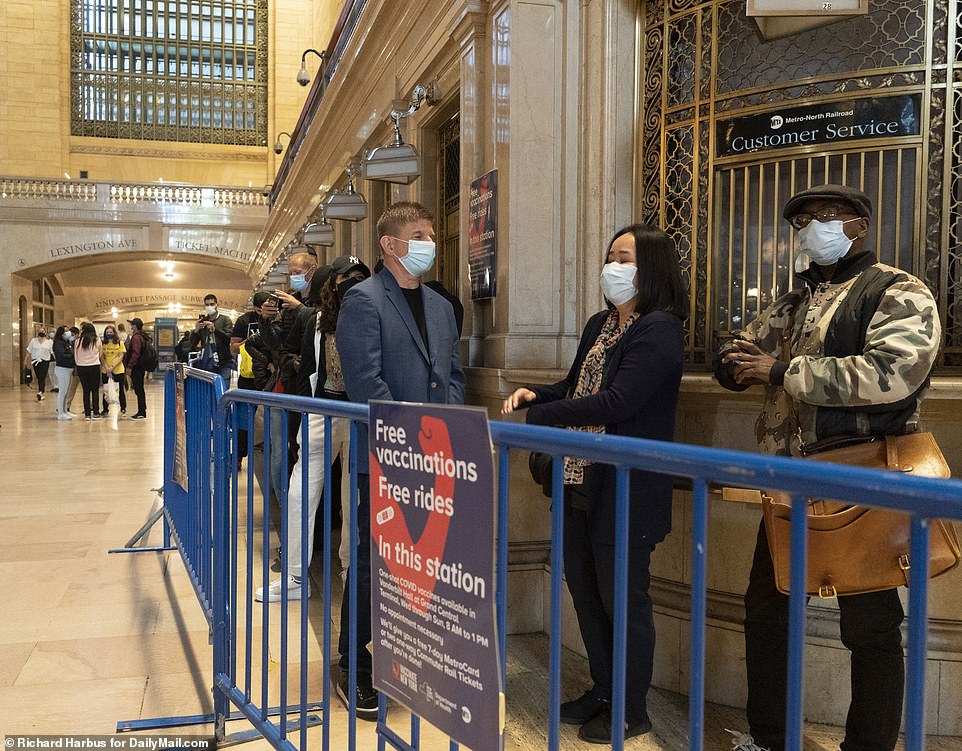