In the beginning, the American military campaign in Afghanistan was officially known as Operation Enduring Freedom. Lofty ideals and ambitions are inherent in such a title, but 20 years later they look hopelessly misplaced. As names go, it now reads like a tragically bad joke.

Afghanistan is today a graveyard of Western ideals that many Afghans had come to hold dear. I said sorry to a lot of those people during the 11 days since the Taliban takeover that we stayed in Kabul, a city we have now left.

One of the reasons we stayed at the Serena Hotel, in the centre of the capital, is that it’s also home to the Qatari Embassy. The Gulf country has played an enormous role in all of this. The Qataris were the intermediaries as the Americans and the Taliban negotiated the end. We felt that as long as we were close to the Qataris, we would be relatively safe.

It was the Qataris who got us out of there. Myself, cameraman Sean Swan and producer Lutfi Abu-Aun are also indebted to the NBC news correspondent Richard Engel, who used his contacts to make sure we were on a flight from Kabul to the Qatari capital Doha. Driving from the hotel to the airport, we almost certainly passed people who would be killed later in the day in the suicide bomb attack close to one of the entrances. 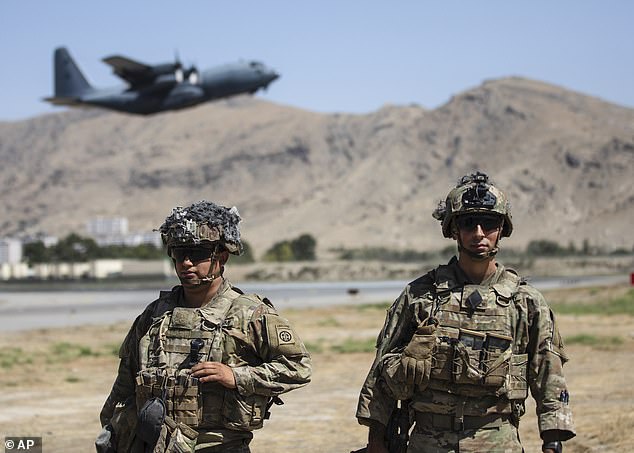 In the beginning, the American military campaign in Afghanistan was officially known as Operation Enduring Freedom. Pictured: Troops in Kabul on August 25

The dividing line between Taliban-held Kabul and the American-held part of the airport was a roll of concertina wire.

At that divide stood a line of armed Taliban now wearing Western army combat fatigues. Just feet from them were soldiers from the 82nd Airborne Division, one of the US Army’s most storied units. The look on the Americans’ faces was one I hadn’t seen before. It was seething humiliation. A long drive over the tarmac brought us to the apron being used by the giant C-17 Globemaster transport planes that have been the workhorses of this evacuation. Affectionately nicknamed ‘Fat Albert’ by the Brits, the Hercules C-130 has been a reliable sidekick. Orderly, quiet columns of Afghans were being led to the aircraft in single file.

The world has answered the call and I lost count of the nationalities of the various planes we watched as we waited for ours. To witness the evacuation has been depressingly impressive. Nations united doing a decent thing. It’s great to see, but then you remember the shame of it all.

When our time came, we shared the vast cargo bay in the Qatari C-17 with about 200 Afghans who were bound for Italy. We would get off in Doha. Because the Qataris fly over Iran, our journey was only two and a bit hours. Our hosts were brilliant.

They gave the Afghans and us food and water. Patient Qatari soldiers were kind as bored, inquisitive Afghan children pestered them throughout the flight. The landing in Doha was as gentle as that of a butterfly with sore legs. 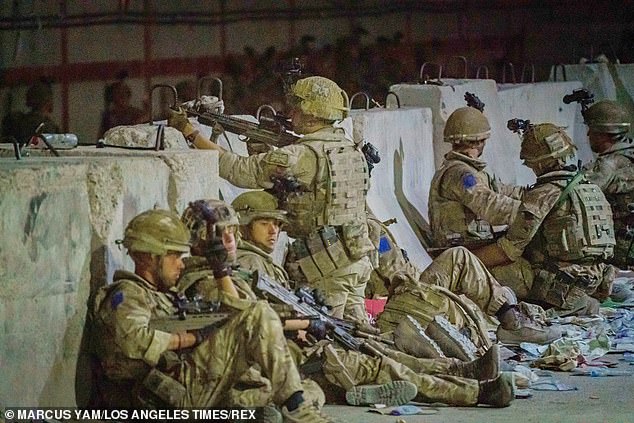 Afghanistan is today a graveyard of Western ideals that many Afghans had come to hold dear. Pictured: Troops in Kabul on August 26

We’re safe and well, but my head is still in Kabul.

Sunday, August 15 is a day that should live in infamy. The culmination of American surrender and failure saw the Taliban amble into Kabul unopposed. It was a walkover that has seen our principles trampled into the dust.

Millions of hearts sank as dread filled the air. The possibilities that are hopes and dreams vanished as helicopters dropped flares and their rotor blades beat the retreat to the capital’s airport.

President Biden had persuaded himself that at some stage over the span of 20 years a just cause became a lost cause.

There was no bumper sticker to encapsulate a befuddled US endeavour that had stagnated and was seemingly goalless. Sorry Joe, but an own goal wasn’t the answer.

The day after they rolled into town, some of the Taliban strolled into the restaurant at our hotel.

Unable to avoid one another, we exchanged awkward pleasantries through our translators. It dawned on me that the last time Taliban gunmen had entered this restaurant was in 2014. Then they sprayed the place with machine-gun fire and killed nine diners. 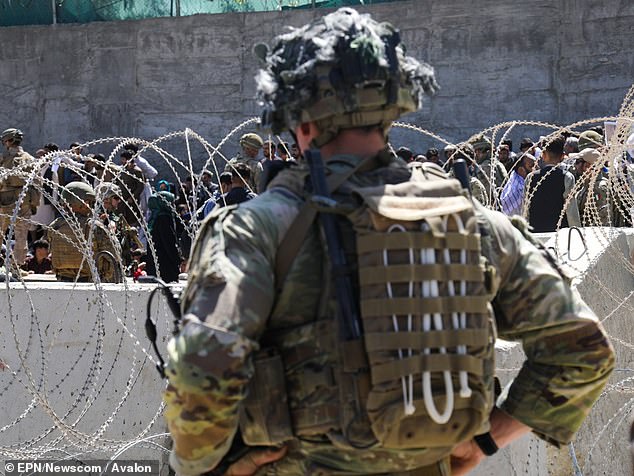 The dividing line between Taliban-held Kabul and the American-held part of the airport was a roll of concertina wire. Pictured: A US soldier at the airport on August 27

Now they were trying to work out what napkins are for.

They took over hotel security, performing all the duties and using all the detectors and X-ray machines that had originally been installed to keep them out.

As one of them held a mirror to inspect the underside of our car one day, I thought to myself: ‘If you don’t know where car bombs may have been hidden then no one does.’

Thursday’s bombs made it the deadliest day for the Americans in a decade. No doubt the Biden administration will use the attack to justify his original decision to order the pull-out. I disagree. I think he has instigated the biggest self-inflicted humiliation ever suffered by the Western world.

He may have brought to an end one of America’s ‘forever wars’, but in doing so he has forever put a bloody, indelible stain on his presidency. Poor Afghanistan.

‘If this isn’t what defeat looks like, I don’t know what does’: US-born Tory defence chairman TOBIAS ELLWOOD on Biden’s ‘geo-strategic blunder’

Resolute words from the US President in response to this week’s devastating terrorist attack in Kabul.

But words alone cannot hide the uncomfortable truth: our world is now a more dangerous place than it was just a month ago.

Because President Biden’s decision to follow through on Donald Trump’s election promise to ‘bring our troops home’ was made with little thought as to what might happen next.

The carnage that now unfolds illustrates what a monumental own goal this has been leaving the US and indeed the West with diminished credibility and influence.

Afghanistan is now a more dangerous adversary than when we arrived there. 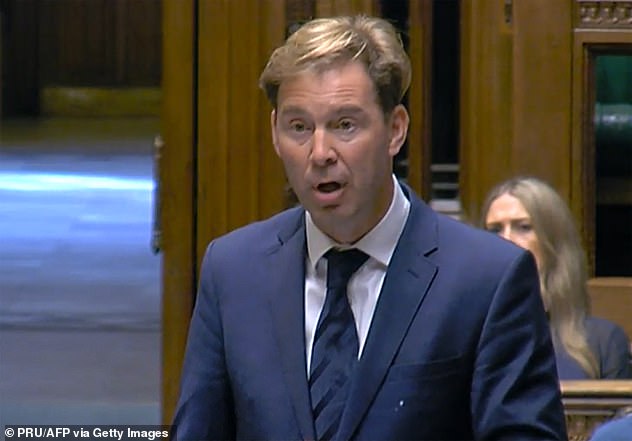 President Biden’s decision to follow through on Donald Trump’s election promise to ‘bring our troops home’ was made with little thought as to what might happen next, writes Tobias Ellwood

Biden has gifted the Taliban $85 billion worth of abandoned US military equipment, including 600,000 weapons, 75,000 vehicles and 200 aircraft.

The Taliban now have more Black Hawk attack helicopters than 85% of the world’s countries.

Worse, the President claims that leaving Afghanistan enables us to focus on the bigger geo-political threats of China and Russia.

But look where Afghanistan sits – squarely between the two. China and Russia are already stepping into our shoes, ready and willing to finance and bolster the very people that allowed 9/11 to happen.

And we will know little because, most critically, we have lost complete intelligence oversight of their plans as we have lost our eyes and ears on the ground.

Now the country is in play again, we have no traction. US money, which propped up three-quarters of the Afghan Government’s annual budget, is gone.

But China has already offered $60 billion for access to the country’s rich mineral resources.

It was not as if Afghanistan was a terrible drain of the West’s blood and treasure.

Yes, Afghanistan was messy, corrupt and the governance model we imposed totally inappropriate.

But things were plodding in the right direction. It was entirely the wrong moment to withdraw troops.

In short, we have cut and run. We have armed our enemy and handed them to Presidents Xi and Putin, our historic rivals.

If this isn’t what defeat looks like, I don’t know what does.

The magnitude of this single presidential decision is likely to be a turning point in the West’s ability and desire to form alliances as a force for good.

What a complete contrast to the energy and resolve of the G7 summit where Biden declared ‘America is Back.’

It has also shone a spotlight on how reactionary British foreign policy has become, lacking the bandwidth to offer our own strategic input.

The so-called ‘special relationship’ isn’t very special at a time, post-Brexit, when we need it to be close, effective and global in reach and ambition.

I can confirm the back channels are not what they used to be.

We have been kept out of the loop on all the strategic decisions involved in the deciding to withdraw.

Our own ability to influence the Taliban is reduced to holding back aid spend if a ruthless interpretation of sharia law is pursued.

But this will hold little sway given that much of this money is directed to supporting women’s education and employment projects.

So, it perfectly suits the Taliban’s narrative to see the programmes fold.

This is therefore a completely empty threat. We have lost all our leverage.

And the Taliban will now turn to China for financial support who, given their own human rights track record, will place few conditions – other than securing access to Afghanistan’s vast lithium deposits and other rare earth metals.

My frustration about where we are today is all the more bitter because I am a supporter of President Biden. I welcomed his election victory, ending the dangerous isolationist policies of his predecessor.

I was born in the States.

I’m a dual national and have worked hard to develop friendships with both Democrats and Republicans. Indeed ,

I worked with Joe Biden before his Presidential candidacy on veteran’s mental health issues. He was my special guest at a veterans event in the House of Commons.

It’s therefore with great sadness that I say his decision to withdraw now from Afghanistan is a huge geo-strategic blunder that can only benefit our enemies as well as heighten the threat of terrorism around the world.

It’s now 20 years since the twin towers fell and we had to confront the threat of global terrorism – a direct assault on our values.

Similar attacks, smaller in scale, now take place on a regular drum beat, across the world.

Yet, by leaving Afghanistan we are further away than ever from overcoming the extremist ideology where a suicide bomber believes he will be fast tracked to paradise if he is willing to conduct such attacks.

We can drone strike as many as many ISIL-K as we like but the threat will persist and the attacks will continue.

To be fair. the President is nothing if not consistent.

He was a critic of the troop surge in Afghanistan under President Obama so perhaps his decision now should come as no surprise.

What is a surprise is how, like Trump, Biden makes his own key decisions rather than Obama’s more consensual approach.

Thanks to a single decision the world is indeed a more dangerous place today.

With global power bases shifting, and adversaries enjoying the West in such chaos – what happens next could have serious repercussions for the next few decades.

And so much will depend upon Joe Biden.

We need to step up as the US’s closest security ally to give backbone to a West now drifting and gifting global leadership to countries whose purpose is to destroy the liberal, international order we have struggled so hard to build since the end of the Cold War.

We must ensure we are not dozing our way to not just irrelevance. but also danger. 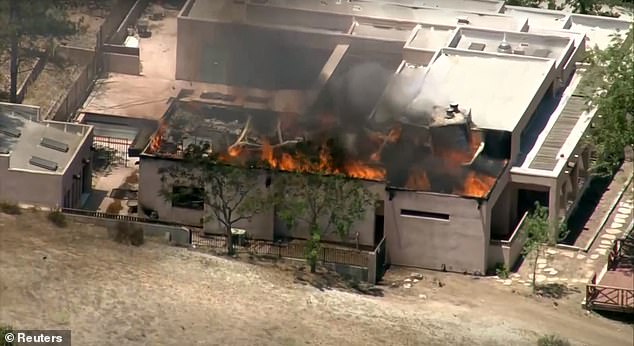 ‘Active shooter’ reported in Santa Clarita: Police respond to calls of one dead and a stand-off 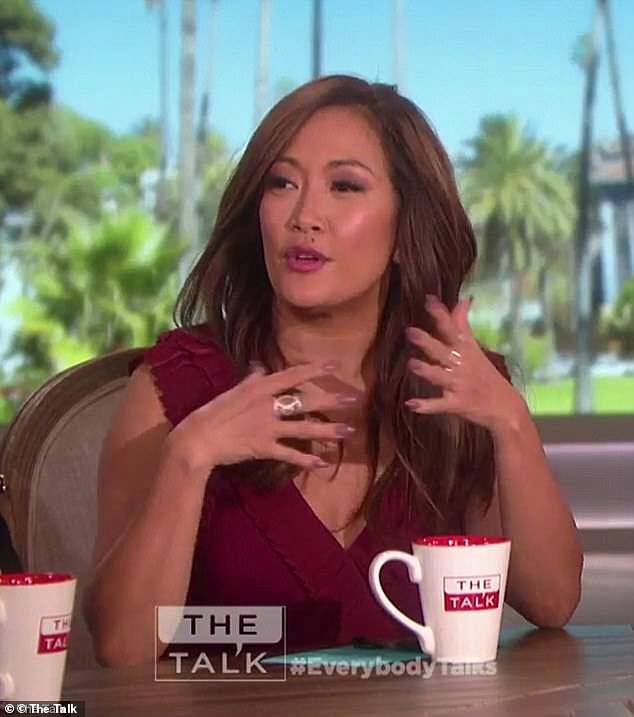 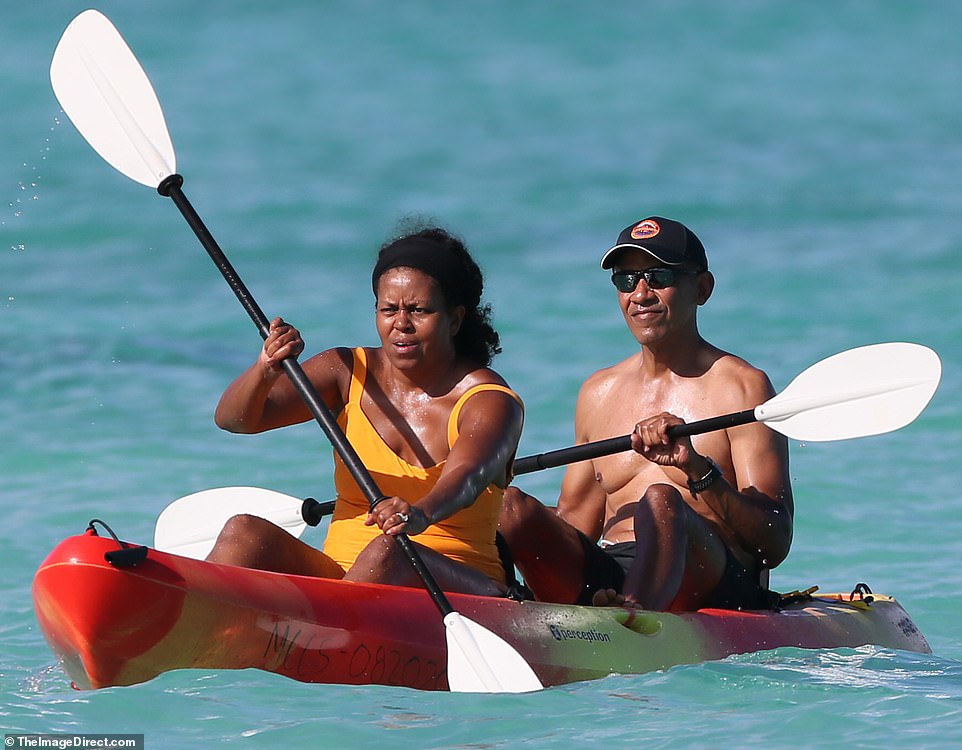 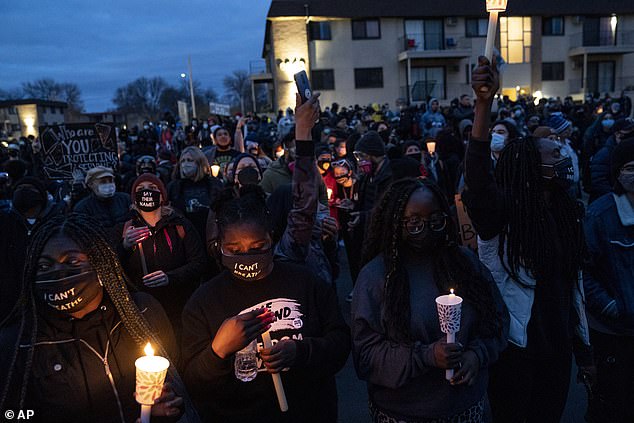 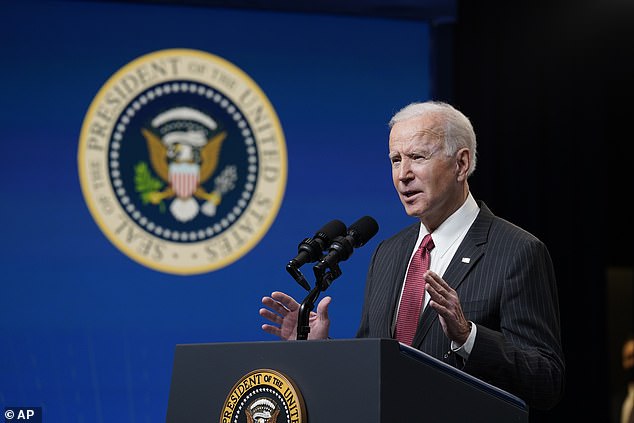 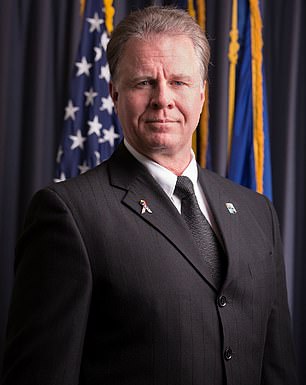 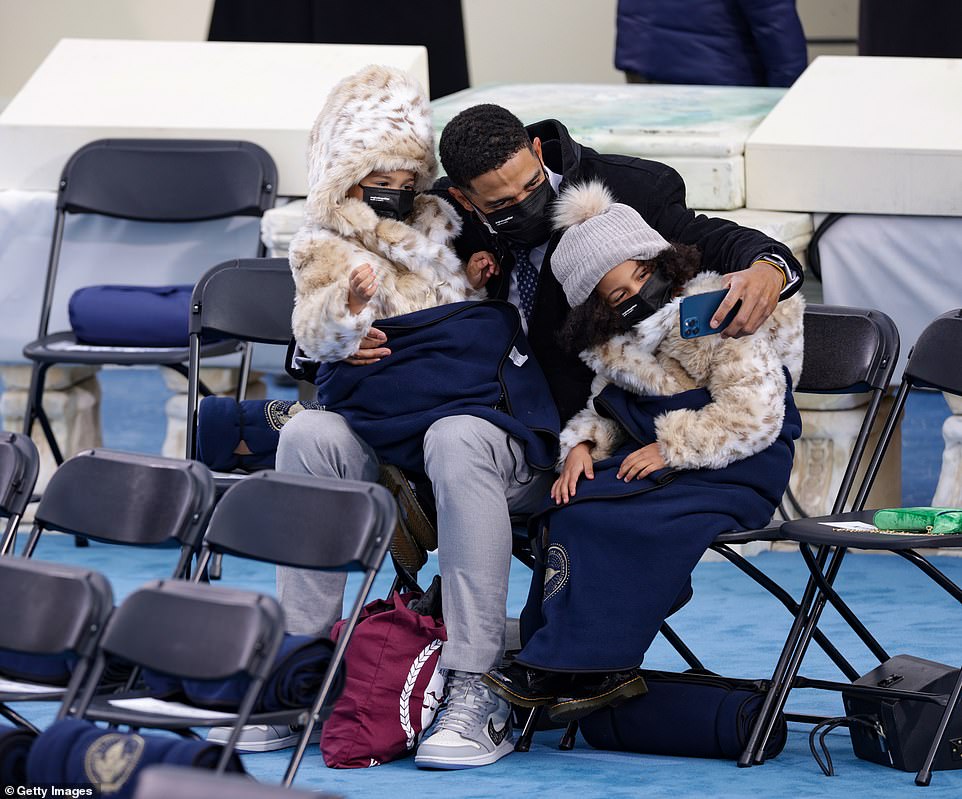 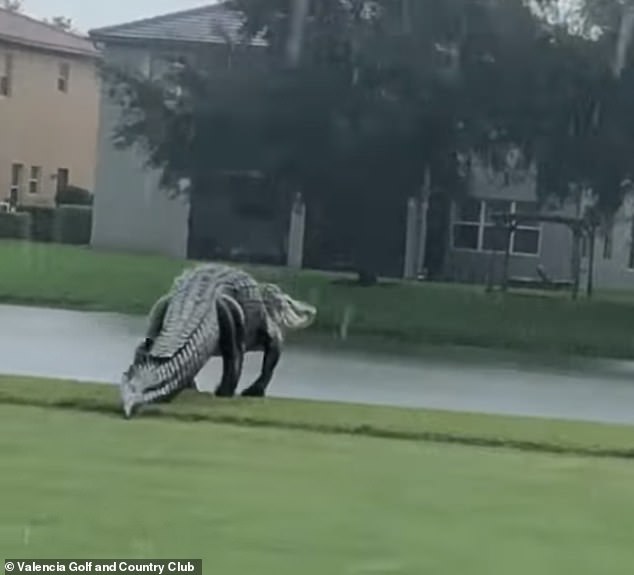