The attacks have long been as puzzling as they are disturbing — strange, high-pitched sounds that victims have sometimes described as a loud ringing or scraping and, at other times, as electronic or even like the chirping of a particularly insistent cricket.

They can be ear-splittingly loud or barely audible, just as the symptoms have been in some cases minor and in others, devastating.

But there is rather more clarity over who is being targeted — U.S. government spies, diplomats and their families. More than 130 of them across the world have succumbed to what has been dubbed ‘Havana Syndrome’, after the place where it began five years ago. About 100 CIA agents and their loved ones are reportedly among the victims.

And if the mystery assault — which has been attributed to a microwave or a sonic weapon — really is, as Washington believes, an attack by a hostile power, it has finally scored a top-level ‘hit’.

On Wednesday, it emerged that Vice President Kamala Harris’s trip to Vietnam had been disrupted over fears of Havana Syndrome. 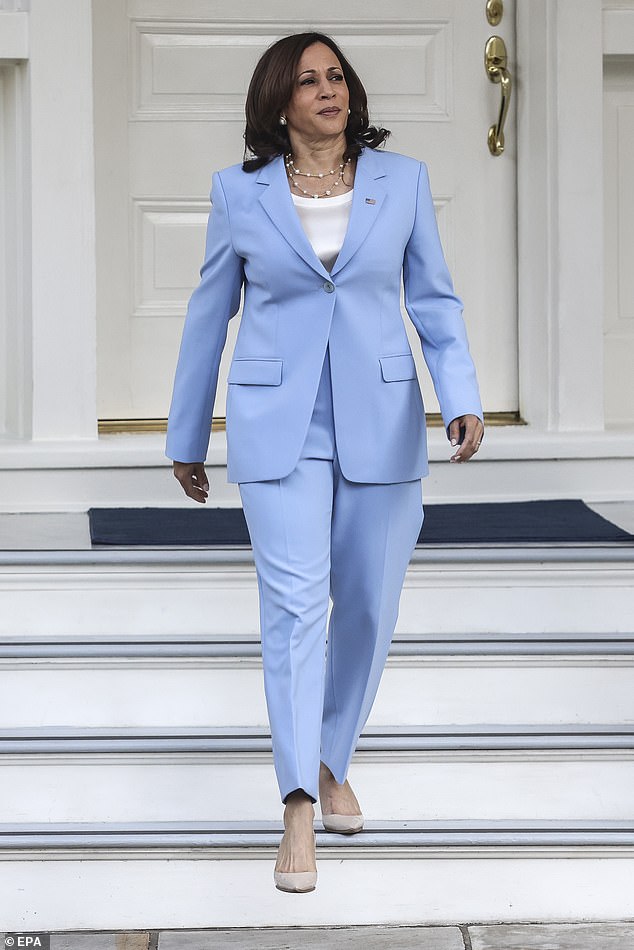 On Wednesday, it emerged that Vice President Kamala Harris’s trip to Vietnam had been disrupted over fears of Havana Syndrome

At least two U.S. officials in Hanoi, the Vietnamese capital, fell sick over the weekend and had to be evacuated just before Ms Harris headed there to reassure the locals that it would help them stand up to Chinese aggression in the South China Sea.

Her flight from Singapore was delayed by more than three hours without explanation — and reporters travelling with Ms Harris had suspicions when her spokesman reassured them, unprompted, that the Vice President was ‘well’. Her flight went ahead after an assessment of the threat, officials said.

Given the growing questions over Joe Biden’s mental fitness for the presidency as he flails around in interviews and press conferences, there is raised concern about his deputy’s capacity to step into the breach if needed. Many victims of Havana Syndrome have reported experiencing a ‘cognitive fog’. 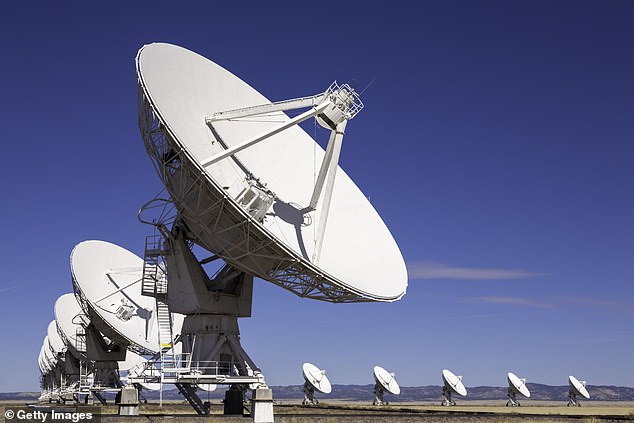 If the mystery assault — which has been attributed to a microwave or a sonic weapon — really is, as Washington believes, an attack by a hostile power, it has finally scored a top-level ‘hit’. Stock picture of a radio telescope in New Mexico

If the sinister forces behind the syndrome, whoever they are, were warming up in Vietnam — like Cuba, a former inveterate U.S. foe and one of the world’s few remaining Communist countries — for an attack on the Vice President, that would signify an alarming escalation in its use.

Certainly, China — like Russia, another clear suspect — didn’t want Ms Harris to go to Vietnam, its state-run media accusing her of seeking to drive a wedge between China and its South-East Asian neighbours.

And if the Havana Syndrome scare was intended to damage her visit, it worked. Ms Harris was going to Hanoi to announce, among other things, a donation of a million coronavirus vaccine doses to the pandemic-hit country. But the three-hour delay allowed China to rush its own envoy to the city and trump the Americans with a Chinese pledge of two million vaccines. 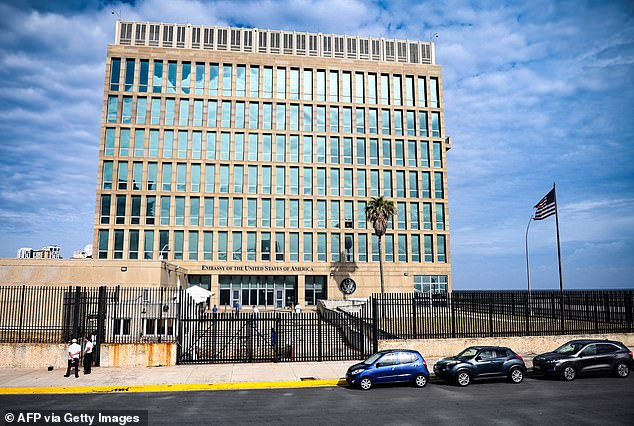 The U.S. officially refers to outbreaks of Havana Syndrome as ‘anomalous health incidents’, but under that bland euphemism swirl myriad dark theories about what is causing it and who is responsible. Victims have also fallen ill as far afield as China, Berlin, Vienna and even Washington DC.

The mystery began in late 2016, when U.S. diplomats and their families as well as Canadian officials started falling ill in Havana.

Victims said the attacks usually came at night: they would at times hear strange noises, which some described as a scraping sound or similar to the chirping of cicadas or crickets. Others said the noises came in minute-long bursts. Some said they heard nothing at all or just felt unusual vibrations.

The incidents didn’t only take place in official embassy property. One diplomat described being jolted awake in a Havana hotel room by a grinding, blaring cacophony. 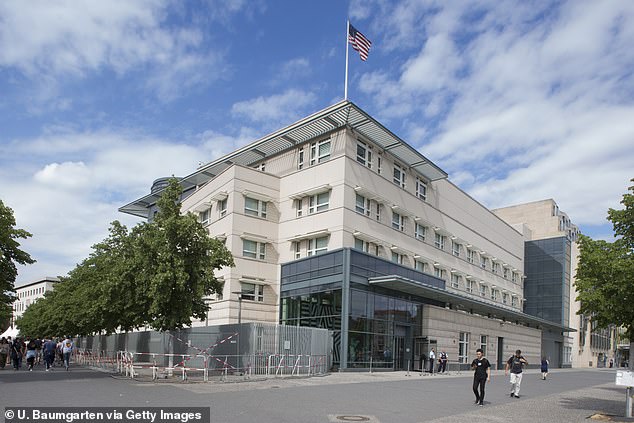 When he moved a few feet across the room, the noise stopped. When he returned to bed, the agonising sound hit him again, as if he had walked through some invisible wall. Symptoms included nosebleeds, nausea, dizziness and headaches, but for some were as serious as mild brain damage and permanent hearing or memory loss. As soon as some victims left Cuba, they stopped hearing noises.

A 2019 U.S. academic study found ‘brain abnormalities’ in the diplomats who had fallen ill, but Cuba dismissed the report.

Initial theories suggested a secret sonic weapon, although that soon gave way to the idea that someone was shooting microwave energy at the Americans.

Analysts confirmed that a portable microwave weapon — using the same basic technology as a microwave oven that heats food from inside, and capable of causing the symptoms described — has in recent years been developed by several countries including the U.S., Russia and China. And while the Americans had baulked at testing on human subjects and shelved such research, their opponents are not thought to have had any ethical qualms.

Sceptics have countered that a weapon capable of damaging the human brain from a distance would need to be far too big to be used in a city. 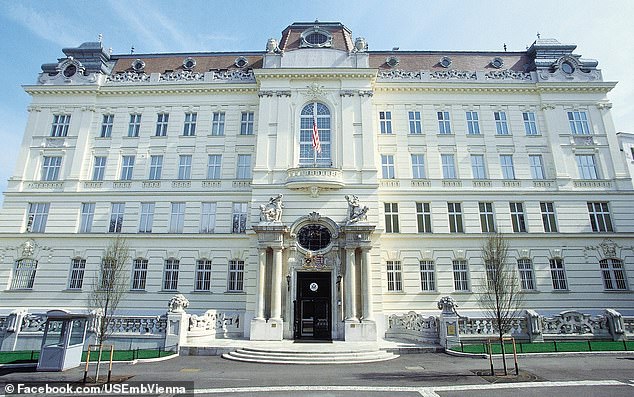 Pictured is the United States Embassy located in Vienna

However, some microwave experts say it is entirely possible for a relatively small device — fitting inside two big suitcases — to focus microwave energy on a small area of the brain. Rapid microwave pulses can heat soft tissue in the brain just enough to cause a ‘thermoelastic pressure wave’ inside the skull. And that pressure wave will initially be felt as sounds.

The Russians — or rather the Soviets in the 1960s and 1970s — have been developing microwave weapons for decades to use against U.S. diplomats on their territory. By flooding a building with microwaves, they would try to recreate documents by detecting the emissions of typewriters and, later, computer keyboards, as well as pick up mobile phone conversations. The CIA and Pentagon have likewise thrown money at such research.

However, microwave theory sceptics say that after years of disappointing results in the laboratory, there is little chance anyone could have produced a weapon capable of inflicting this sort of damage.

A string of other theories have been advanced for what happened in Cuba. They include ultrasound (using sound frequencies too high for human hearing) that could have come from covert listening devices; the noise of a rare jungle cricket; the effect of local pesticides and even a mass hysteria in which victims imagined it all. But most of these theories don’t explain why U.S. officials have been affected far beyond Cuba.

Four years ago, a CIA agent in Moscow was targeted (waking up in a hotel room with severe vertigo) and in 2018, U.S. diplomats stationed at the large consulate in Guangzhou, China, began reporting similar symptoms.

In 2019, two White House officials reported debilitating symptoms while staying in a London hotel room during a state visit by President Trump. One of them said she then experienced them again while walking her dog near her home in Virginia.

Another incident occurred the following year on a lawn close to the White House.

Last month, more than 20 U.S. diplomats and support staff at the embassy in Vienna were affected. America, like many countries, has a large presence in the Austrian capital, which since the Cold War has been known as an espionage hotspot. Most of those affected were spies.

Only a week ago, it emerged that at least two officials at the U.S. embassy in Berlin were being treated for the effects of Havana Syndrome. And diplomatic sources say similar incidents have occurred among U.S. officials in other unnamed European countries, with some victims being intelligence officers or diplomats working on Russia-related issues.

There have also been unconfirmed cases of the syndrome in Poland, Taiwan, Georgia, Colombia and Uzbekistan.

Targets appear to have been followed, as the symptoms persisted even after they were moved to new accommodation.

One victim in Europe was reportedly diagnosed with the sort of brain injury seen in people exposed to the shockwaves from explosions. The target described piercing ear pain, high-pitched electronic-sounding noise and pressure in the ears.

‘There is no evidence about what happened to us, but it is striking that some of us had worked on Russia-related issues,’ the victim told the Wall Street Journal, adding: ‘Whatever it is, it is a form of terrorism.’

In Washington, the issue has become one of national security importance. The CIA has reportedly appointed one of the spooks who helped find Osama bin Laden to discover who and what is causing Havana Syndrome.

The current consensus is that it is probably caused by microwave energy and the work of the Russians — Moscow denies this — although the Hanoi outbreak may switch attention to China.

Defence experts wouldn’t be surprised if either country were behind it. While the U.S. remains top dog in conventional weapons, her two main enemies instead resort to more subtle measures that would not be considered an act of war — in this case, to (literally) get inside their opponent’s head and wear her down. 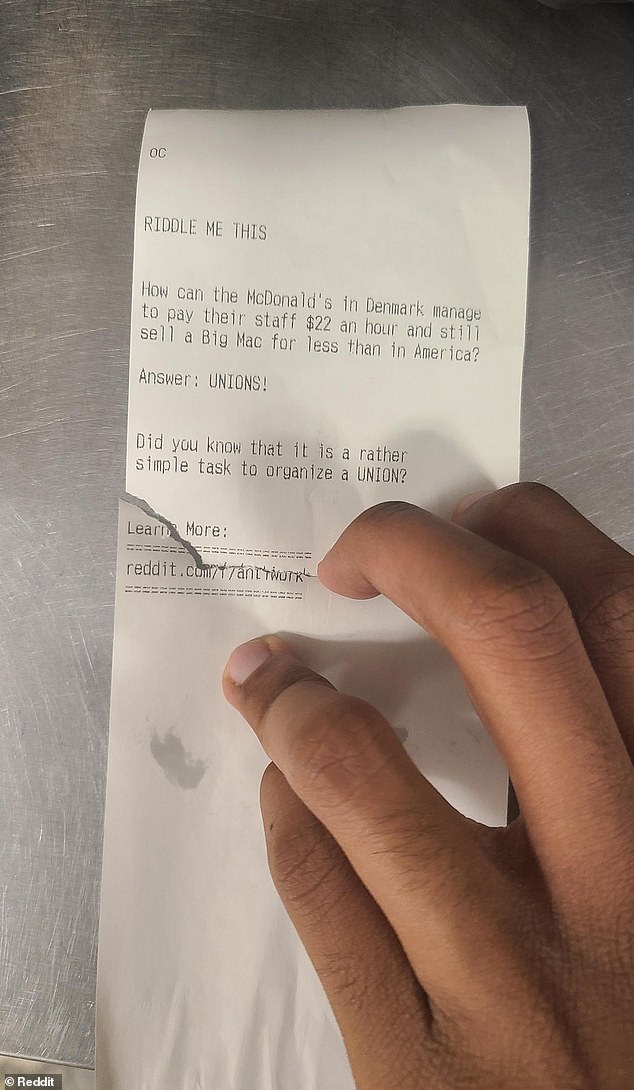 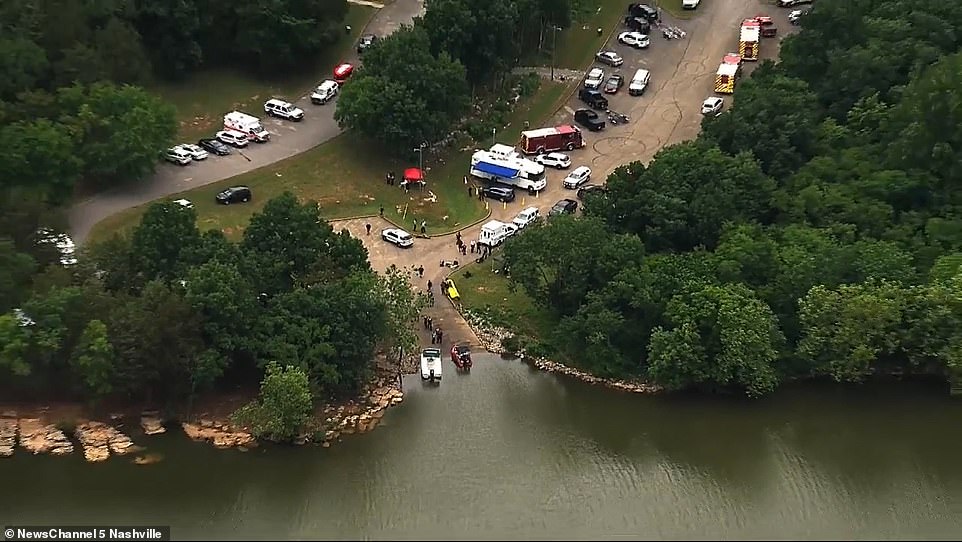 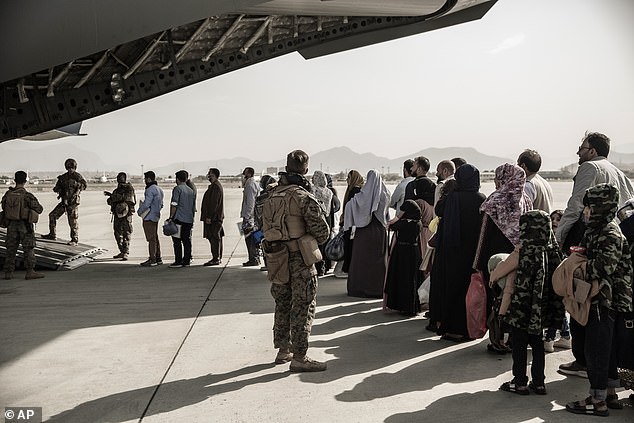 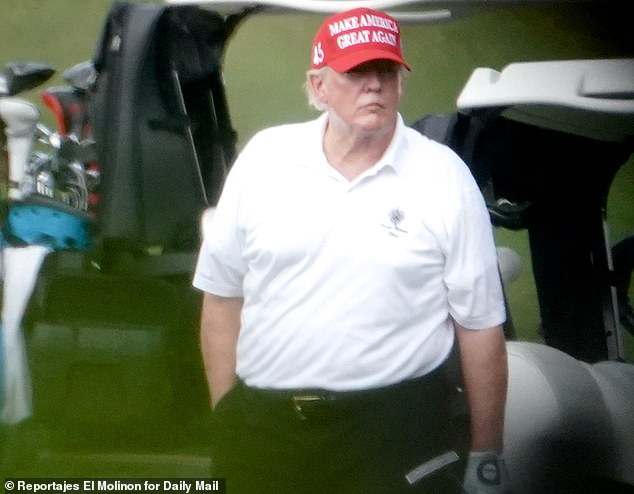 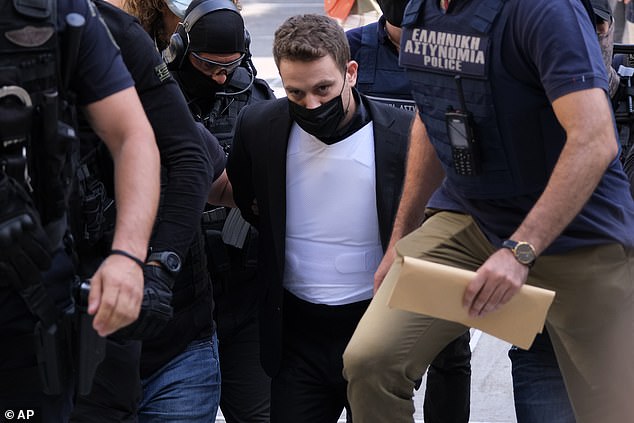 Caroline Crouch murder: Husband ‘covered up murder so he could raise daughter’ 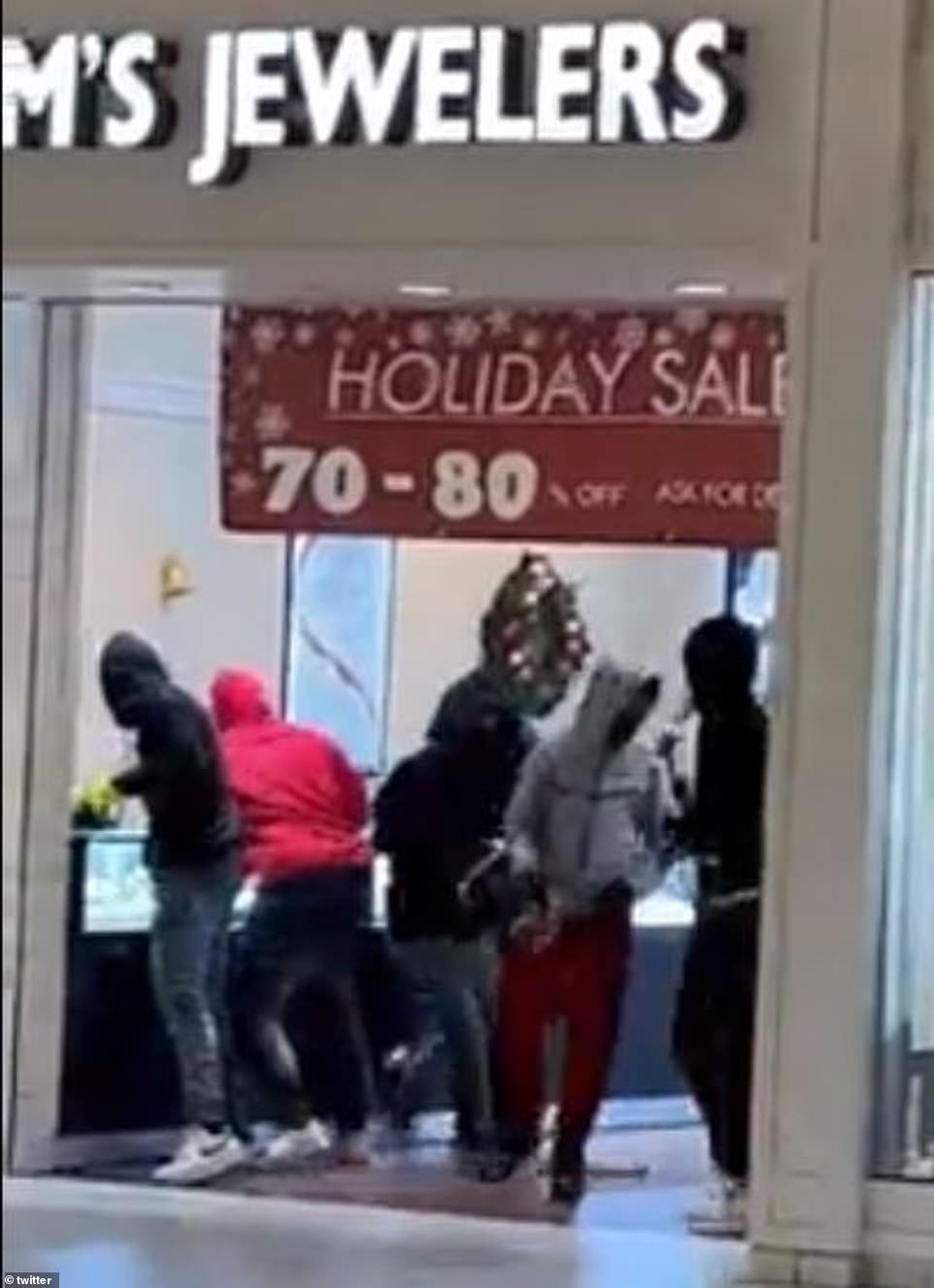 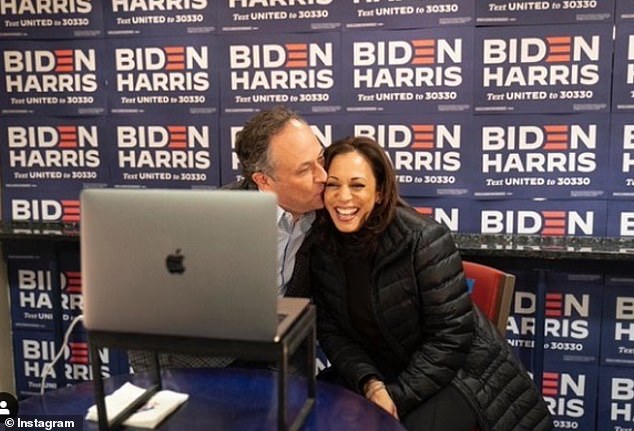 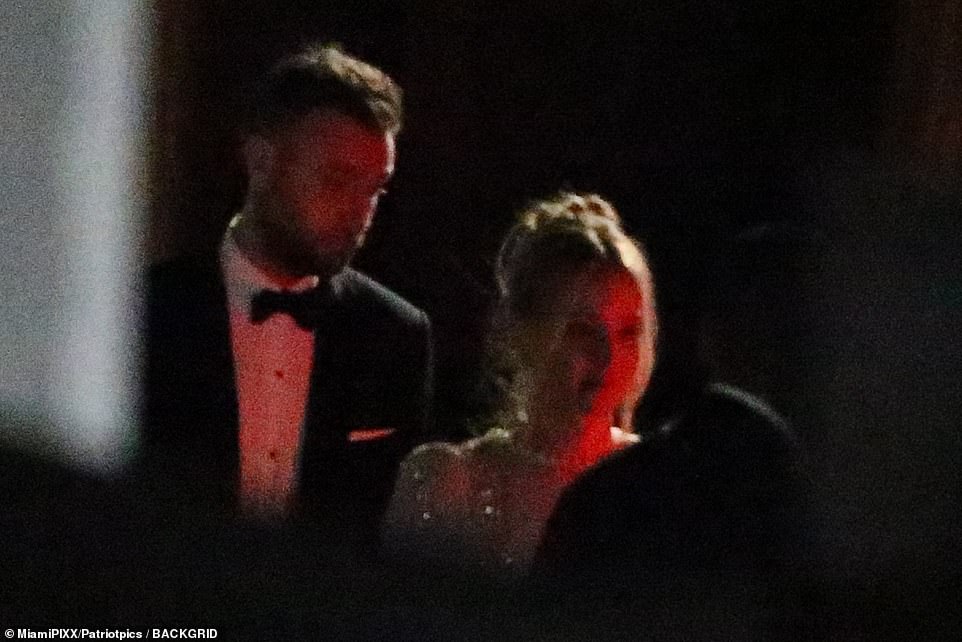