Sunbathing on a speedboat, cruising down to the Bay of Biscay, even a spot of island hopping — it’s the sort of summer holiday much of Britain would kill for now.

But while most of us have stayed close to home, making do with a staycation, Wally the Walrus had other ideas.

The four-year-old whiskery gentleman simply swam off on his travels some time in March. When he fancied a pit-stop, he’d haul his 800kg bulk onto the nearest motorboat and take a nap. Sometimes for several days.

Now his 2,500 mile solo tour has turned him into something of an international celebrity.

From a first sighting off the south-west coast of Ireland, then on to Wales, Cornwall, France, the Isles of Scilly and Bilbao, Wally has left a trail of destruction and a couple of sunk boats in his wake. His sighting in Bilbao in northern Spain is believed to be the farthest south a walrus has ever been seen. 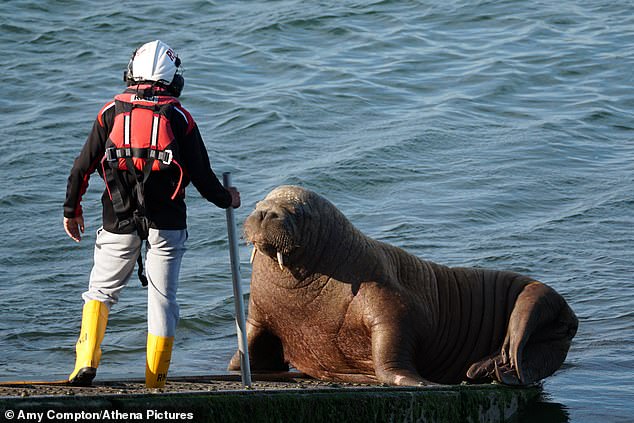 Last sighting of Wally the walrus, as an RNLI volunteer tries to get him to move from the boathouse slipway in Tenby, Wales 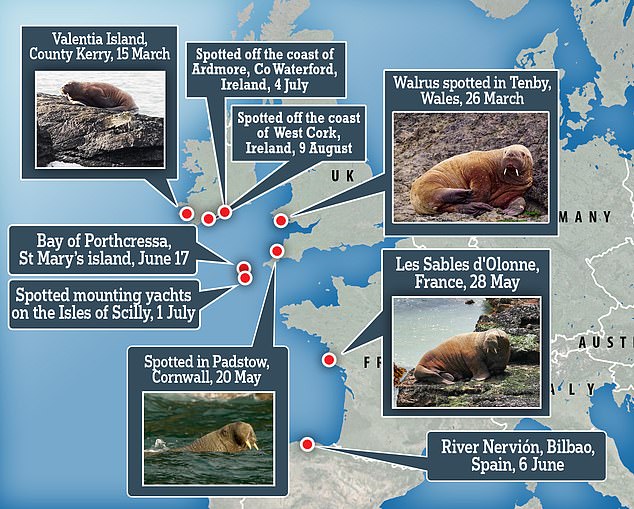 A map showing Wally the Walrus’ epic journey across Europe, which has made him an international celebrity

Marine experts can’t say exactly where Wally came from, but there is some consensus he travelled from as far as Svalbard — a set of islands between Norway and the North Pole.

And being a semi-aquatic creature — that can sleep for up to 20 hours at a time on floating ice — Wally’s ‘use’ of boats is very resourceful.

‘He’s absolutely adorable, really charismatic and quite mischievous and most people never get to see a wild walrus in their life,’ she says.

‘He needs to sleep and eat so that he can gather up enough energy reserves and blubber to make it all the way back home, up north, which is what we all really hope for. We want him to return to his Arctic habitat to be with his own kind once again.’

But before he does that, where’s Wally been? Giulia Crouch, takes a look through his photo album… 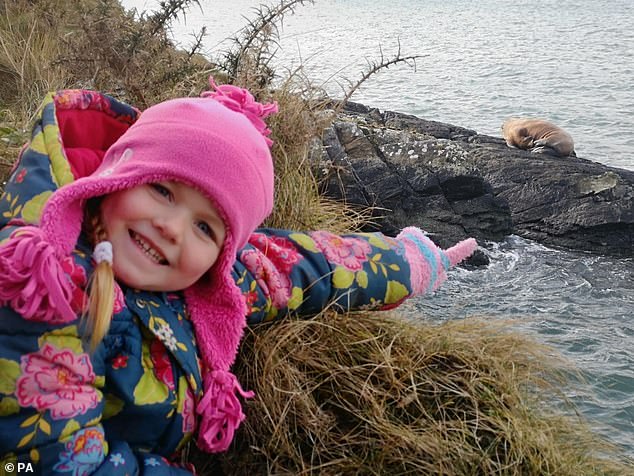 Undated handout photo of five year old Muireann Houlihan with the walrus she spotted along the coast of Valentia Island, Co Kerry

Wally is first spotted 2,000 miles from home relaxing on some rocks by Muireann Houlihan, five, and her father, who were out walking.

There are only 22,000 of Wally’s kind left in the world and this is the first time one has been seen in Ireland since 1999 and is a worrying indicator of climate change. 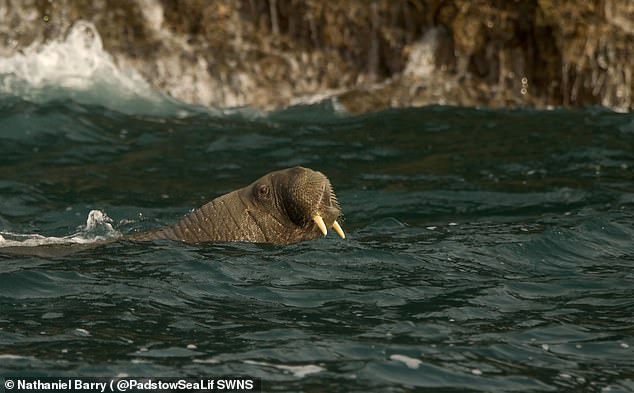 The walrus, which had been enjoying the sun in Tenby, Wales, was spotted by a group on a sea safari near Padstow

In an ‘absolute first’ for Cornwall the Arctic walrus appears on its shores. It follows the sighting of killer whales off Cornwall for the first time in more than ten years earlier in the same month. 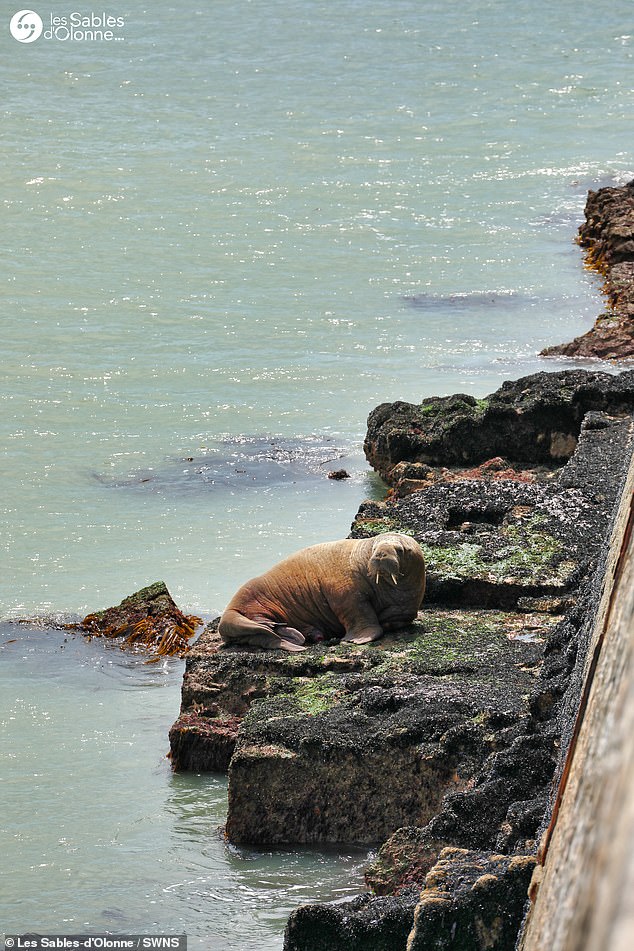 Wally the walrus is photographed sunning himself in Les Sables-d’Olonne,Western France

Wally is snapped sunbathing in Les Sables-d’Olonne. It is the town’s first walrus sighting for 50 years and means he’s now 2,000 miles south of his Arctic home. Police who try to move him off a dinghy describe him as uncooperative. From there he travels to Bilbao where he is spotted on June 5 in the River Nervion. 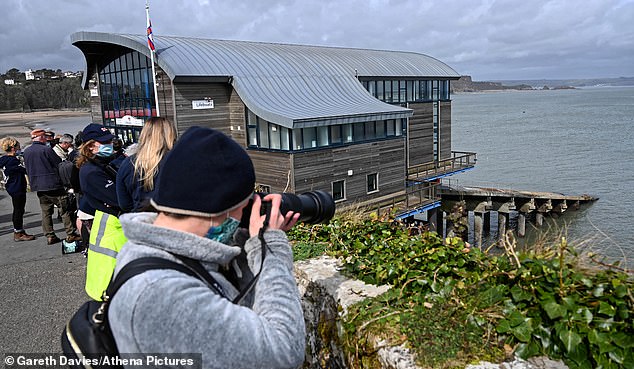 The walrus which has been seen in various places around Pembrokeshire, has now appeared at the RNLI boathouse slipway in Tenby 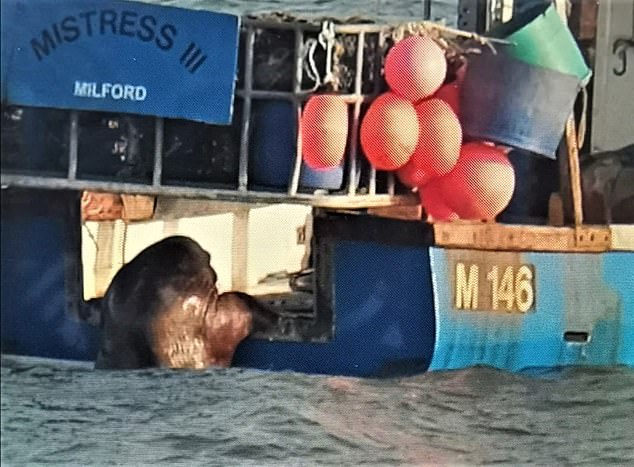 Wally soon becomes Tenby’s top attraction. Local businesses are quick to create Wally memorabilia and a brewery even names a beer after the new celebrity

Wally is spotted 280 miles away in Pembrokeshire seaside town Tenby where he starts causing mischief.

He is seen capsizing a dinghy before attempting to climb onto a fishing boat moored in the harbour, a spectacle which stops locals in their tracks.

‘He had his flippers right up on deck,’ said beachgoer Martyn Thomas, 36. ‘He’s a huge creature.’

Another observer, plumber Sean Roche, said: ‘I was late for work this morning and this is the best excuse ever.’

April 5: Wally soon becomes Tenby’s top attraction. Local businesses are quick to create Wally memorabilia and a brewery even names a beer after the new celebrity.

Members of the public travel from as far as Essex and Leeds — breaking Covid restrictions over the Easter Weekend — to glimpse the wild animal who was seen adorably balancing a starfish on his nose and trying to clamber onto all manner of vessels. Wally was identified as a young, male walrus due to the shortness of his tusks. Cleopatra Browne, of Welsh Marine Life Rescue, was amazed at his size. ‘He’s a whopper — about the size of a cow. I’ve seen them on telly and the news, but he was huge,’ she says.

April 26: Seen again in Tenby after disappearing for several days, having been scared. Anyone who disturbs Wally is warned they could be guilty of a criminal offence under the Wildlife and Countryside Act 1981.

The mammal had fled the harbour after some people threw items at him, flew drones close to him and used fish in a bid to lure him too close.

RSPCA inspector Keith Hogben says: ‘We’ve all got used to social distance over the last year — and that’s something we now need to practise with this walrus.’

However, emergency services get concerned when Wally becomes fond of taking a nap on the lifeboat station slipway and has to be shooed away.

You wally! The intrepid traveller (right, from top) clambers onto a boat and is snapped (circled) on the lifeboat slipway. Left: Reluctant to budge 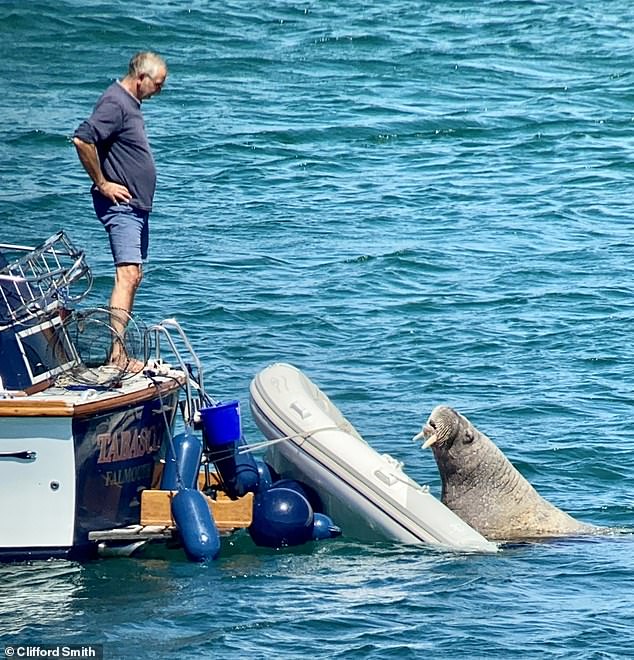 June 17: back to the UK and The Isles of Scilly

Wally spends a month and a half in the Isles of Scilly, off the Cornish coast, where once again he gets up to no good.

He’s pictured mounting several boats and an ‘action plan’ is put in place to try to deter him.

Barrier and acoustic deterrents are considered as a means of stopping Wally heaving himself onto boats.

‘No one has ever been in this situation in this country before, we don’t have animals that are this big, and it’s causing a lot of angst,’ says Dan Jarvis of British Divers Marine Life Rescue. 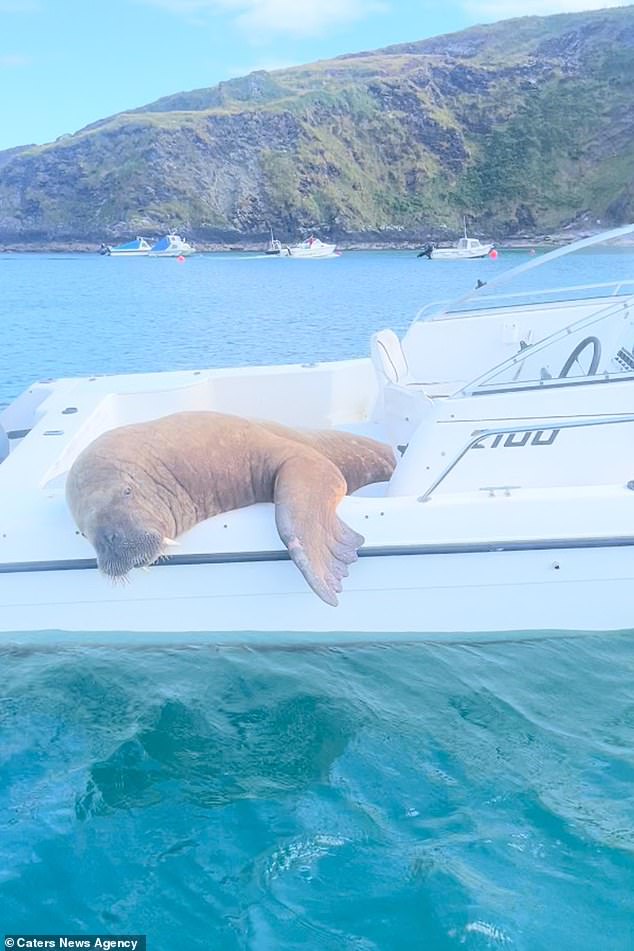 Wally the walrus continues harassing boaters in a small mooring bay in Ireland. 38 year old plumber Paul O’Regan captured the footage of Wally at his local mooring bay in Cork

Last seen in Scilly on July 30, Wally travels 125 miles to County Waterford, south-east Ireland, where he climbs onto the boat of a local hotelier.

Patrick Shields, general manager at the five-star Cliff House Hotel in Ardmore, joked: ‘What with Covid, we haven’t had a lot of international visitors this summer.

So to have someone from Norway was very exciting.’ A few days later Wally capsizes a boat belonging to Clonakilty Distillery in West Cork.

Boat owner Adam Collier told the Mail: ‘We are delighted to have helped in assisting a wonderful marine creature and we really hope Wally will find his way back to his own family 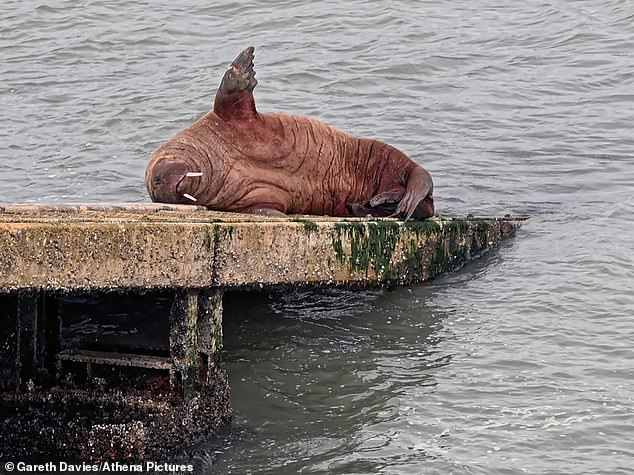 Seal Rescue Ireland hope Wally will make use of a resting platform they have built for him and that he can build strength for the long journey home.

Walruses can dive up to 90 metres and stay underwater for up to 30 minutes at a time. ‘He’s headed in the right direction now so we hope he continues his journey,’ says Melanie Croce. 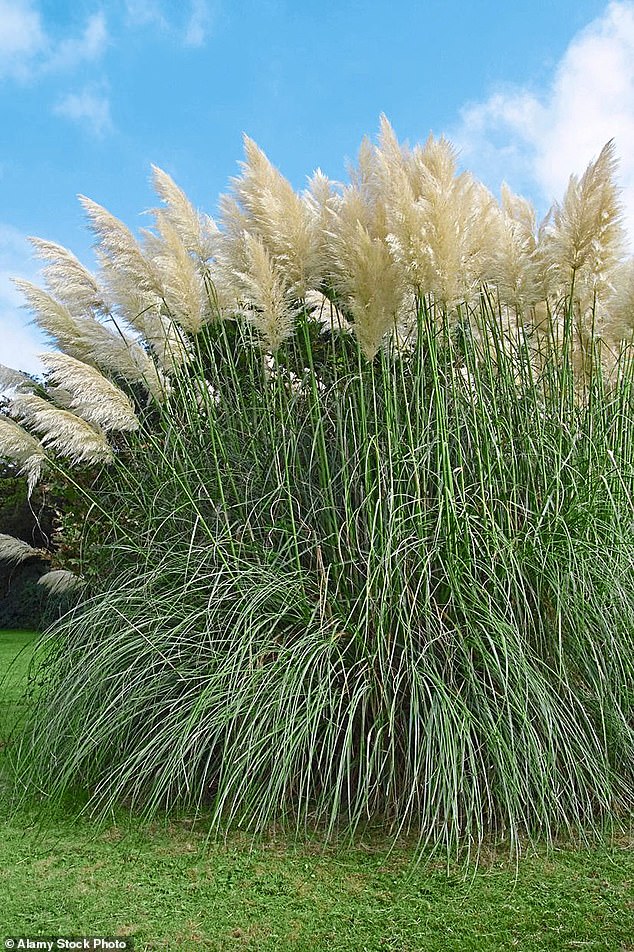 ‘Swinger grass’ is the new target of garden thieves 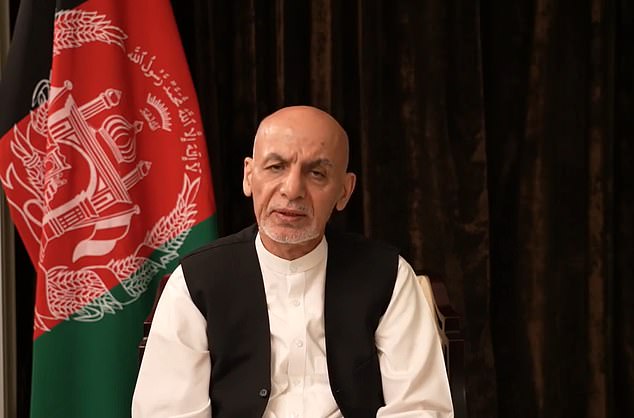 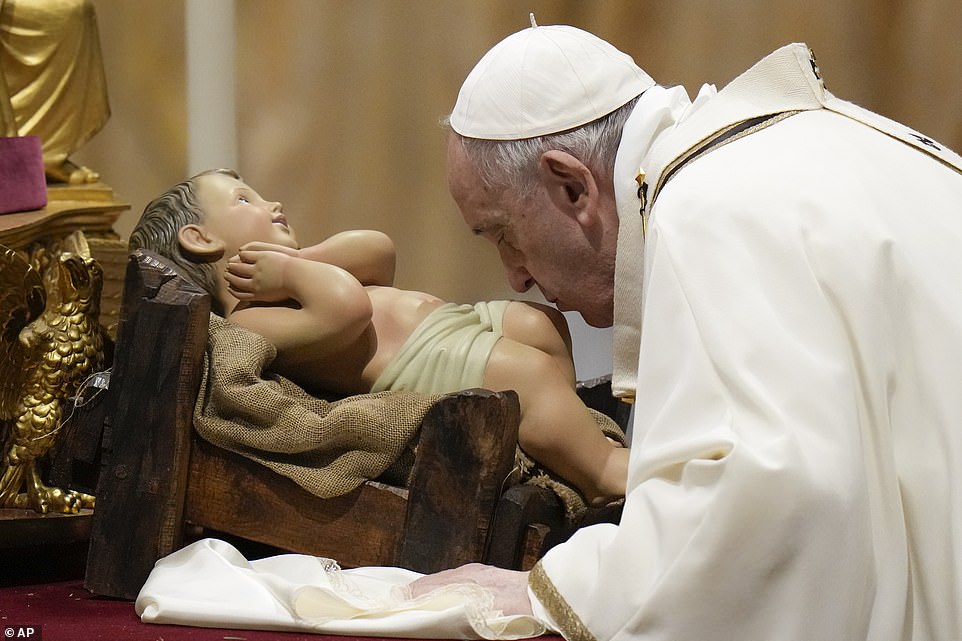 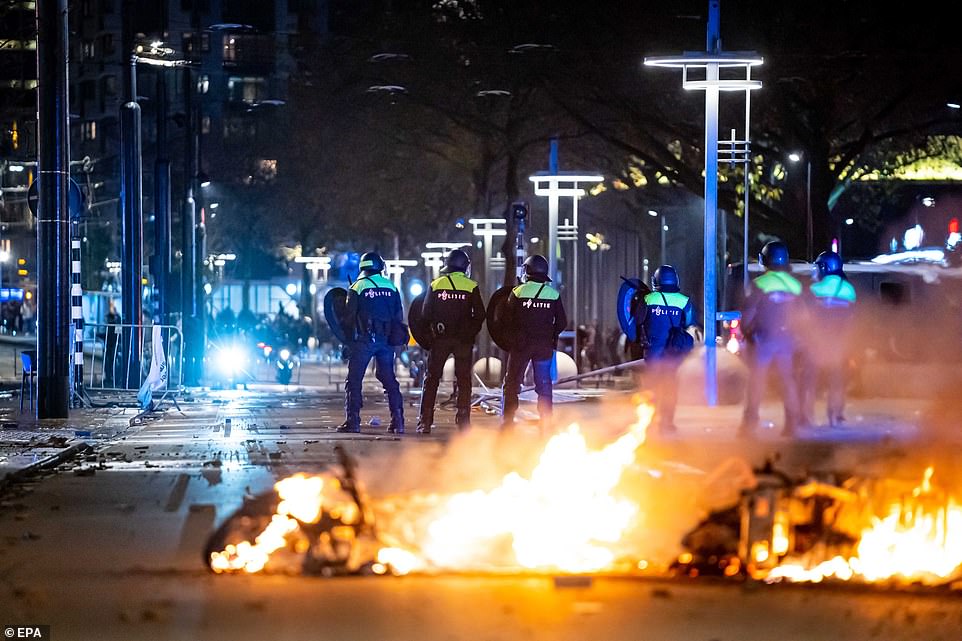 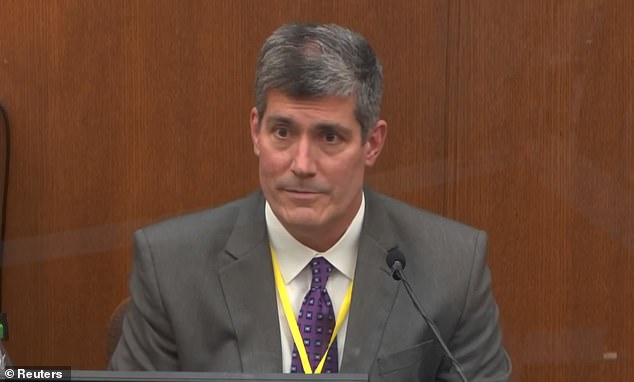