Security at the airport is managed by Heathrow itself, with apologetic officials admitting they were ‘experiencing some longer than usual queues’ but were hoping to clear the congestion as ‘quickly as possible’.

The airport then confirmed around noon that the delays were ‘due to colleagues being instructed to self-isolate by NHS Track and Trace’ and that it had to get extra staff to the site to help clear the queues.

It comes as bosses at some companies in England gave their staff the morning off or even the entire day at home following England’s dramatic defeat to on penalties in the final at Wembley Stadium last night.

FlightRadar24 data for all flights leaving Heathrow this morning up to 11am showed 60 out of the 79 scheduled departed at least 15 minutes late. Some 28 of those 60 were delayed by more than 45 minutes.

Hundreds of passengers were photographed not socially distancing in queues, although most did appear to be wearing face masks as they waiting to get to the entry point of the security screening area of the departures hall.

And Keaton Stone, a BBC producer from Lichfield, said: ‘Never seen Heathrow so busy! Tried to stay at home or at least deploy maximum social distancing all week ahead of flying to the US today – seems slightly redundant when this is what greets you at the airport! Wish I had dressed in a Zorb ball today!’

The scenes follow months of chaos at Heathrow arrivals which has seen queues of up to seven hours due to Border Force staff shortages and passengers from ‘red list’ countries forced to mix with those from other nations. 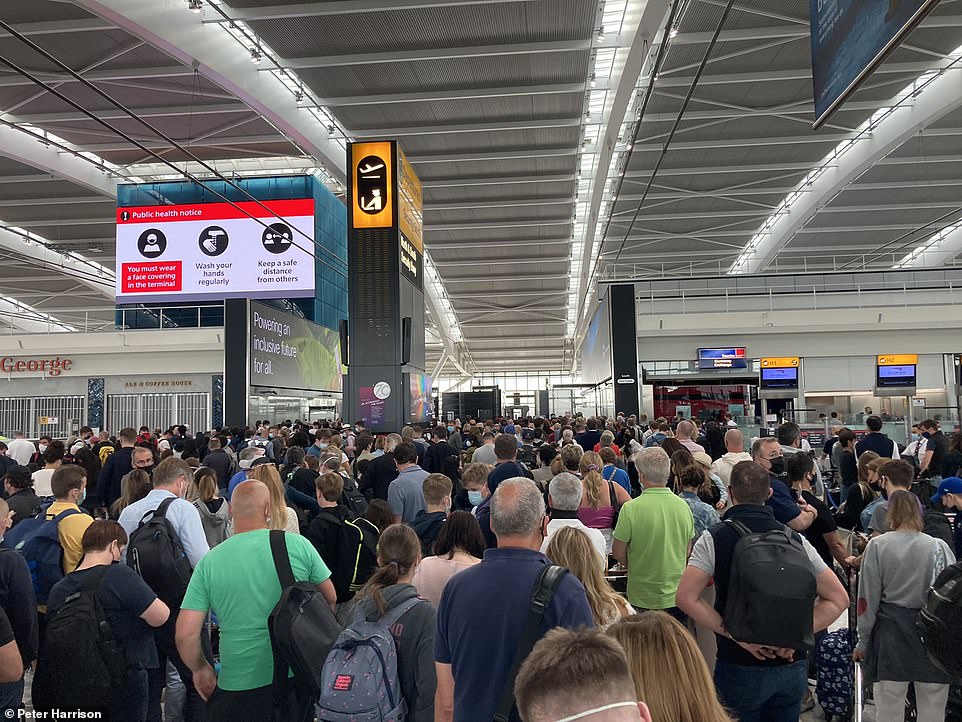 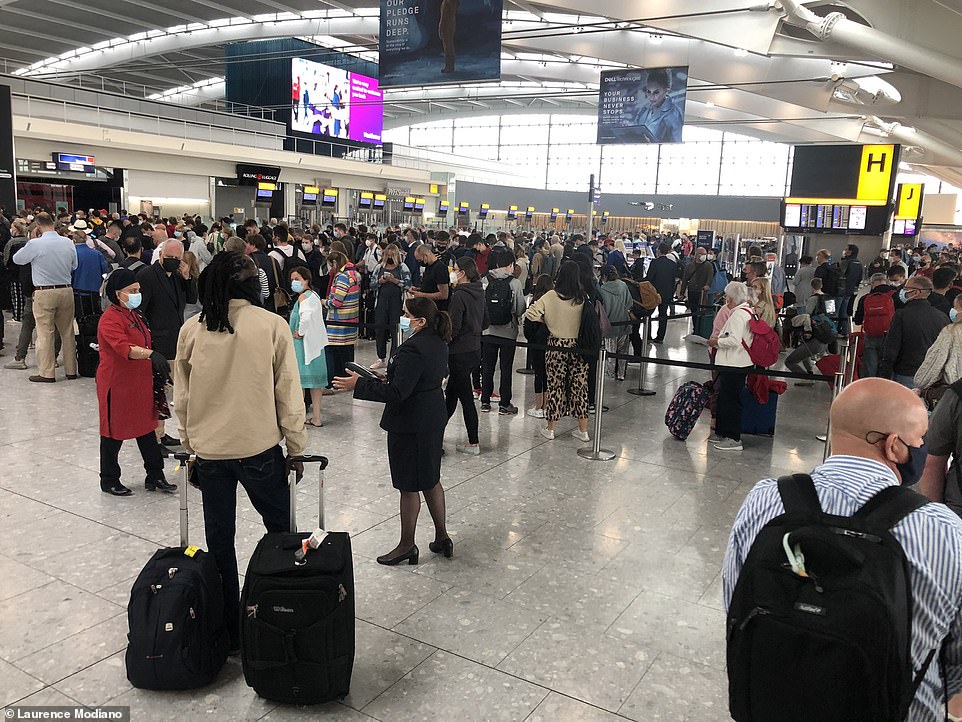 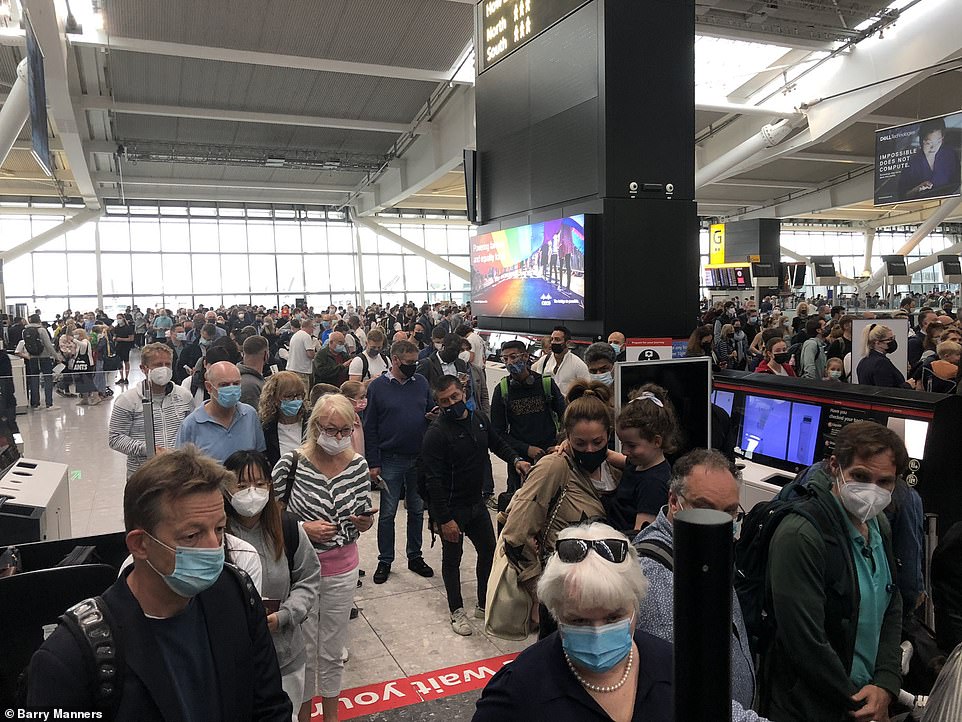 Security at the airport is managed by Heathrow, with officials saying they are ‘experiencing some longer than usual queues’

And Sheila Akinlabi, from London, the founder of lifestyle box company CocoBean Gifts, said on Twitter: ‘I’ve never had to run this fast to catch a plane in my life. Pretty sure I broke some kind of world record.

‘Heathrow security at T5 was absolute chaos this morning! The queues were so long, apparently staff didn’t turn up. Missed my Pret breaky. Anyways on my flight now.’

A Heathrow spokesman told MailOnline today: ‘Earlier today we experienced some passenger congestion in Terminal 5 departures, due to colleagues being instructed to self-isolate by NHS Test and Trace.

‘We have activated additional team members to assist passengers with their journeys and the operation has now returned to normal. We apologise to our passengers for any inconvenience caused.’

An earlier Heathrow statement had said: ‘We’re currently experiencing some passenger congestion in Terminal 5 departures. Our teams are working hard to get passengers away on their journeys and we hope to have the congestion cleared as quickly as possible. Passengers are reminded that face coverings are mandatory inside the airport.’

The airport also told one passenger in a tweet: ‘We’re experiencing some longer than usual queues at the T5 check-in area that we have our teams working on. We hope to have the congestion cleared as quickly as possible.’ It added to another: ‘We are so sorry to hear the queue at the airport is longer than expected.’ 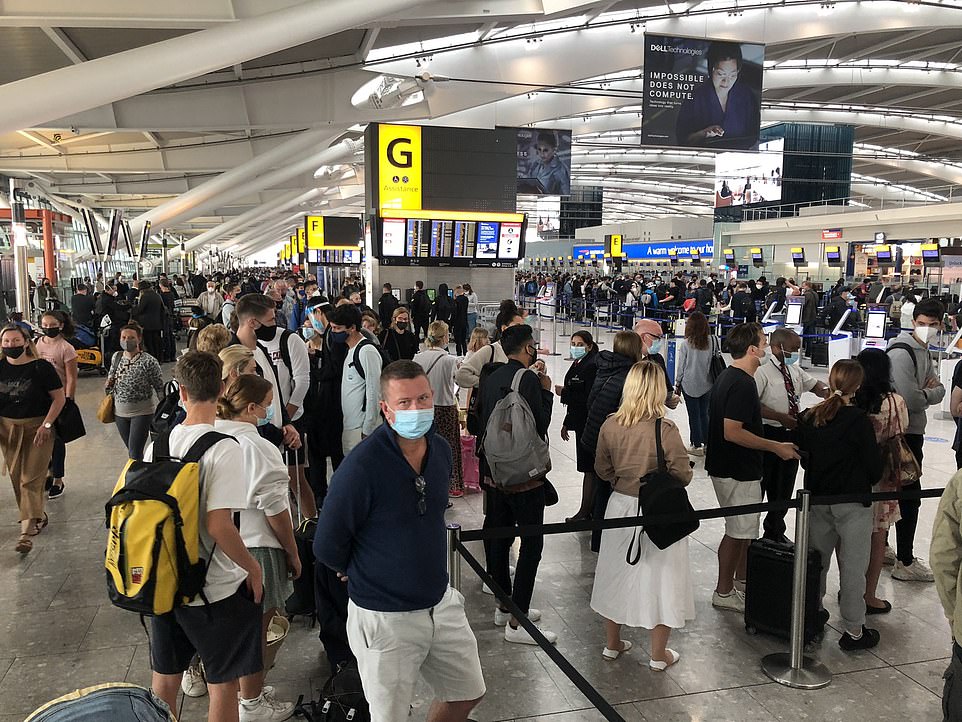 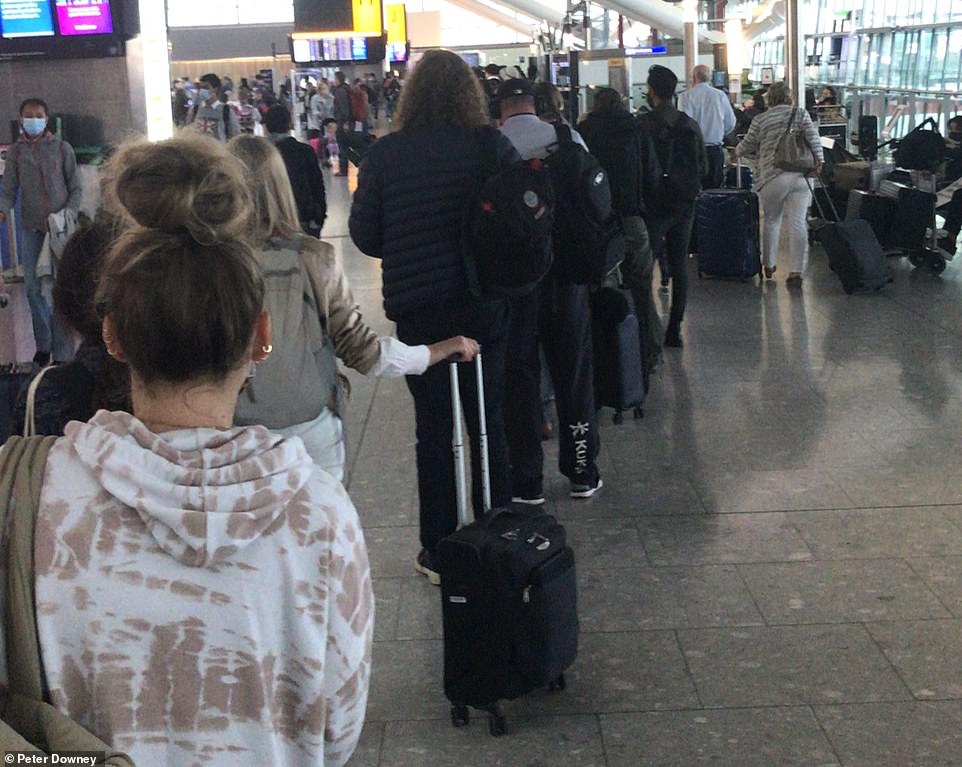 It comes after figures released this morning revealed that Heathrow passenger numbers remain almost 90 per cent down on pre-pandemic levels and significantly lower than EU rival airports.

Airport bosses revealed just 957,000 passengers passed through its terminals in June compared with 7,246,157 who used the west London airport in June 2019.

The number of passengers travelling through the airport covers the month where Portugal was moved from the green list of countries to amber and led to widespread fury in the travel sector over the speed of rule changes for travellers.

Following the latest data, Heathrow bosses urged the Government to do more to support the sector. They pointed out that Schiphol and Frankfurt airports in the Netherlands and Germany respectively have surpassed their 2019 cargo volumes, growing by 14 per cent and 9 per cent respectively compared to 2019.

Airport bosses revealed just 957,000 passengers passed through its terminals in June compared with 7,246,157 who used the west London airport in June 2019.

The number of passengers travelling through the airport covers the month where Portugal was moved from the green list of countries to amber and led to widespread fury in the travel sector over the speed of rule changes for travellers.

Following the latest data, Heathrow bosses urged the Government to do more to support the sector.

They pointed out that Schiphol and Frankfurt airports in the Netherlands and Germany respectively have surpassed their 2019 cargo volumes, growing by 14 per cent and 9 per cent  respectively compared to 2019.

Meanwhile, cargo tonnage at Heathrow, the UK’s biggest port, is still down 16 per cent.

Bosses added that the continued closure of the transatlantic links between the UK and US is costing the country’s economy at least £23 million a day.

Passenger traffic from Heathrow to the US is down by around 80 per cent, whereas the EU, which has reopened unilaterally with the US, has seen traffic recover to only around 40 per cent down.

Heathrow chief executive John Holland-Kaye said: ‘While it’s fantastic news that some double-vaccinated passengers will no longer need to quarantine from amber countries, ministers need to extend this policy to US and EU nationals if they want to kickstart the economy.

‘These changes will be critical for exporters who are losing out to EU rivals and families who have been separated from loved ones.’

The airport announced last week it has resumed using both its runways and plans to reopen Terminal 3 this week. 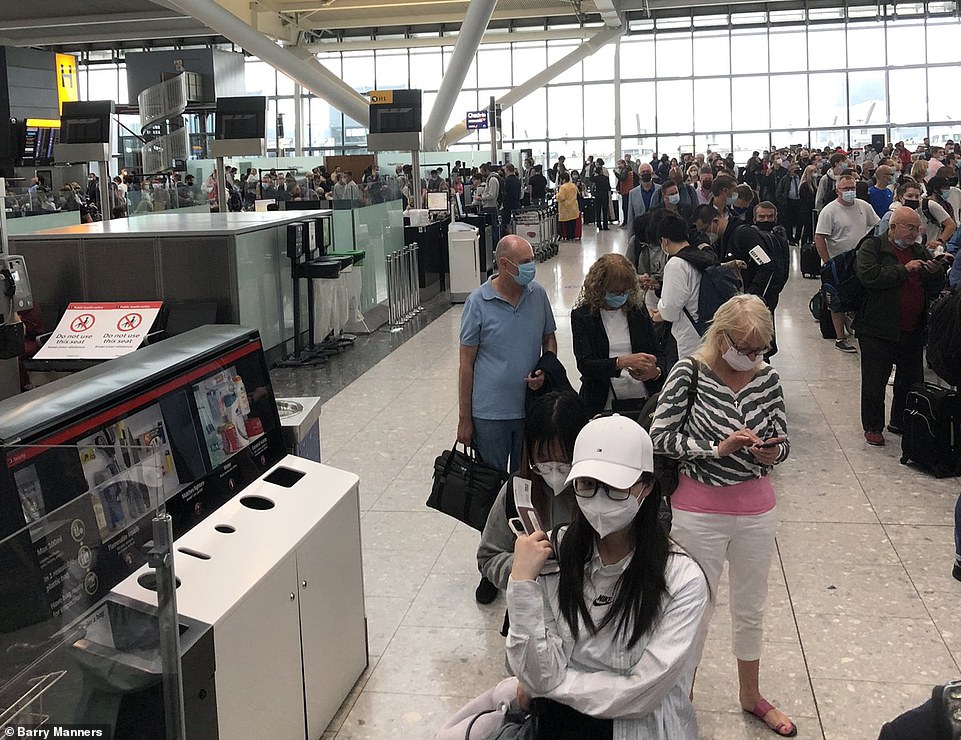 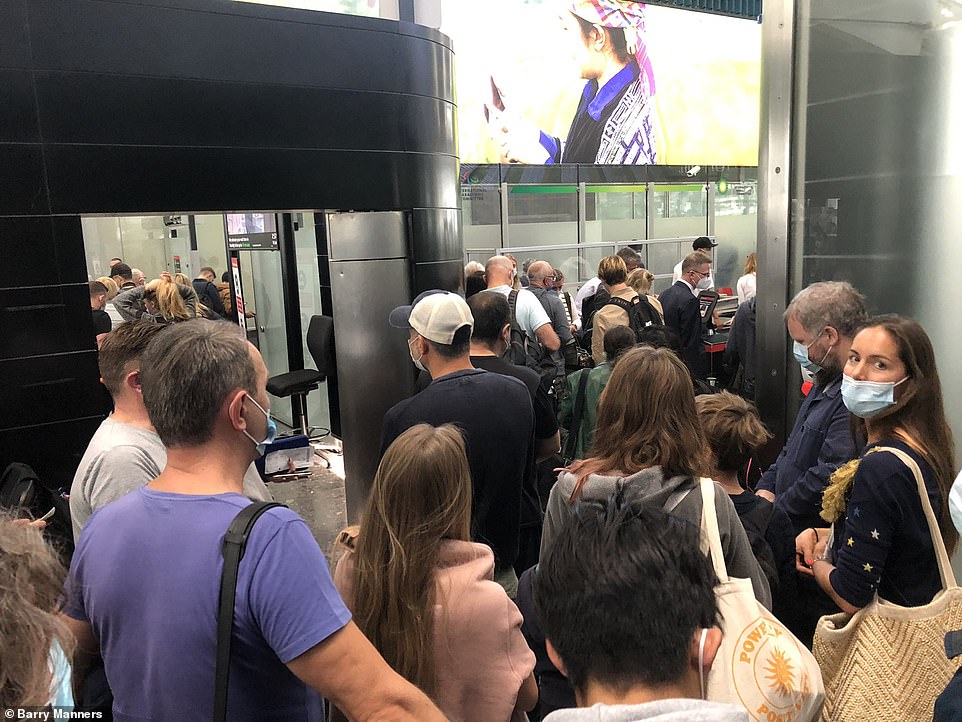 The decision comes as the Government is expected to ease travel rules for people who have had two doses of a coronavirus vaccine.

The airport began only using one of its two runways for standard operations to cut costs when demand for travel collapsed in May last year.

Terminals 3 and 4 were also closed to regular passengers at around that time.

A facility to process arrivals from red list countries was opened in Terminal 3 last month, but that has been switched to Terminal 4, which is not expected to reopen this year. 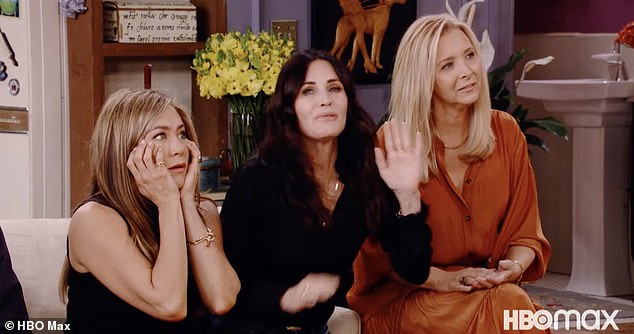 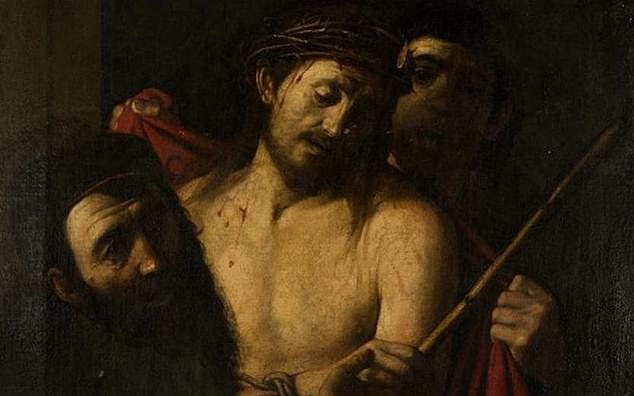 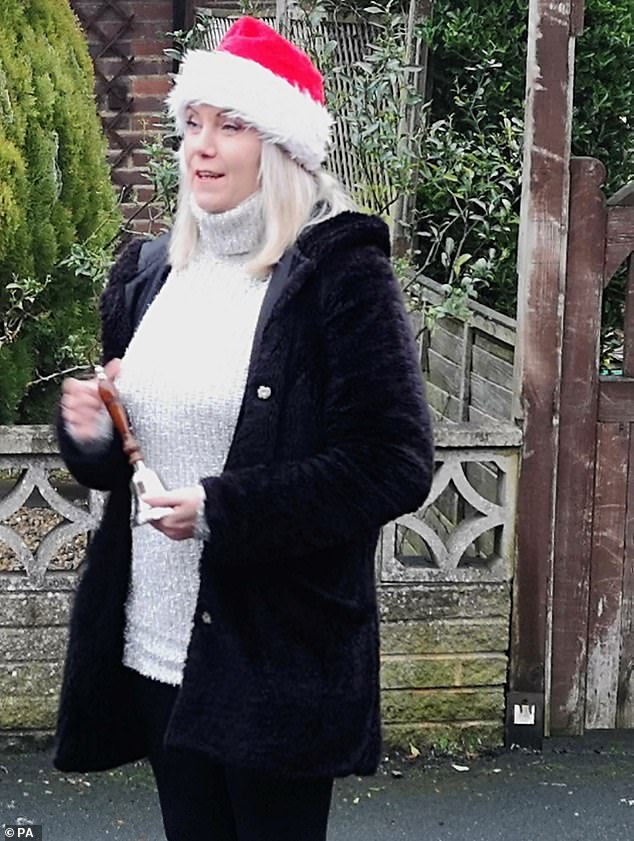 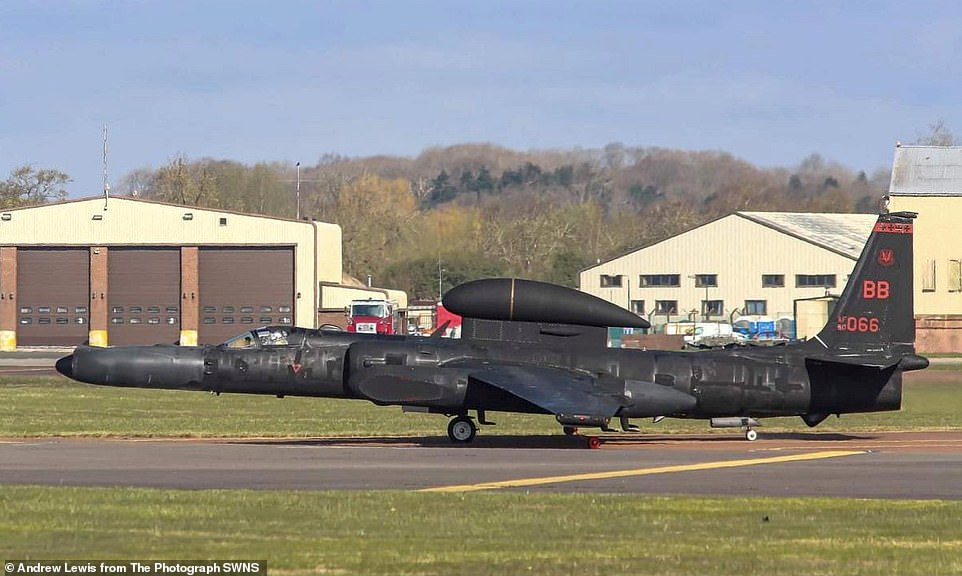 Top secret U-2 spy plane takes off from England 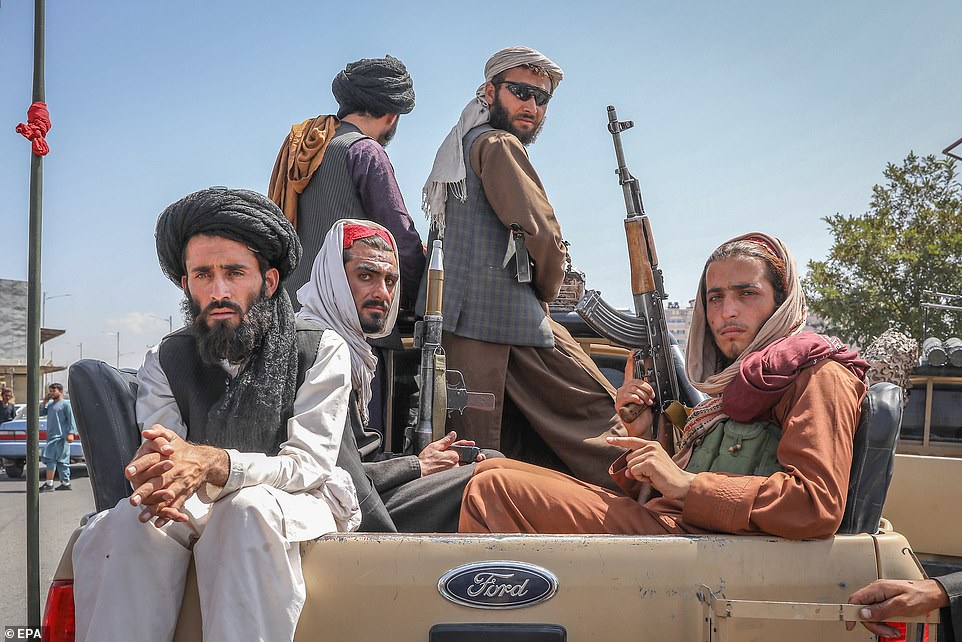 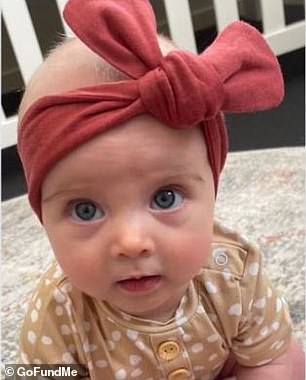