chose to spend the long holiday weekend with boyfriend Devin Booker, despite her family jetsetting to other locations for Memorial Day.

The 25-year-old supermodel and the Phoenix Suns player, 24, were seen making a quick grocery run at Jayde’s in Bel Air, where they stocked up on some necessary supplies.

For the brief outing, the style star was seen oddly pairing cowboy boots with sweatpants before the duo made a quick escape in her 1965 Chevrolet pickup. 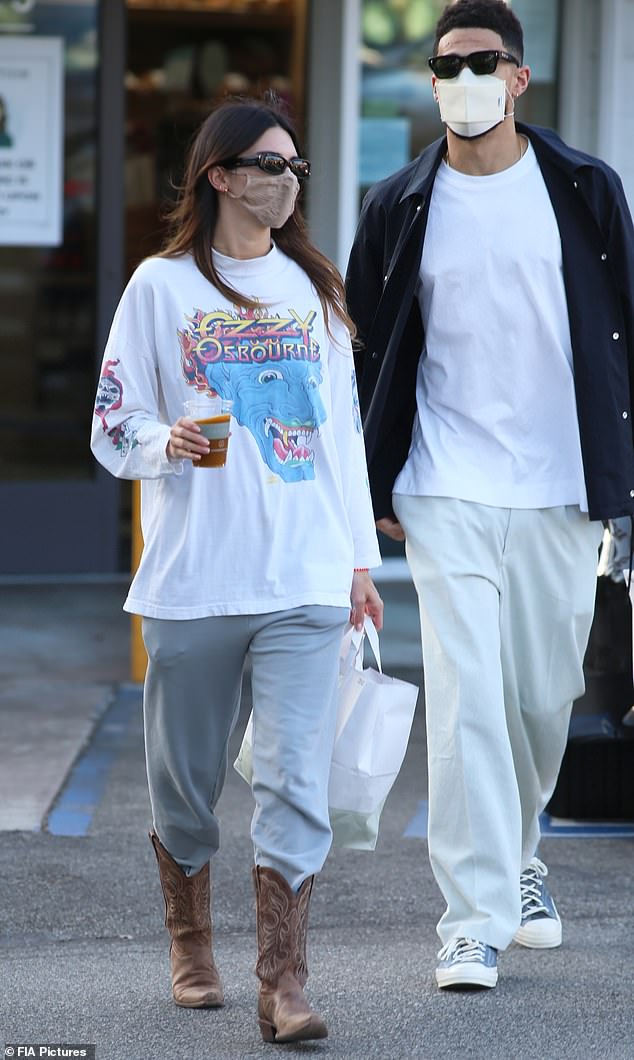 Kendall continued to add to the already lively outfit with a long sleeved Ozzy Osbourne T-shirt covered in artful designs.

Kendall sported what looked to be a fresh blow out and hid her money making face behind a pair of black sunglasses and a nude cloth face mask.

The covergirl juggled an iced coffee and a white bag full of provisions before the pair returned to her vintage C-10 pickup to head back to her expertly manicured mansion. 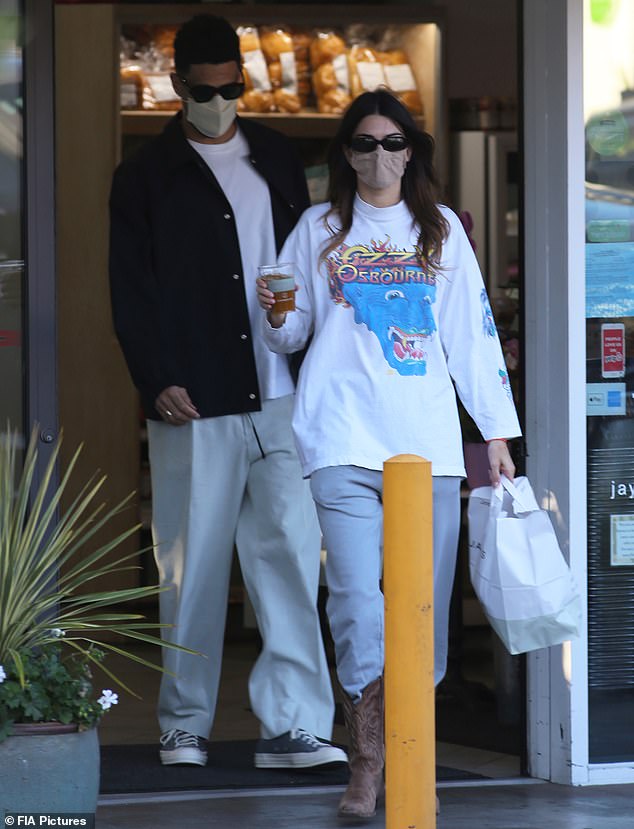 Daring look: The covergirl juggled an iced coffee and a white bag full of provisions while sporting a peculiar cowboy boots and sweatpants look 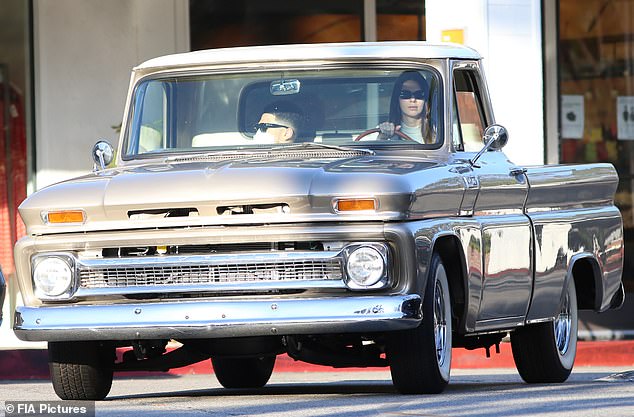 Quick escape: After grabbing a few necessary provisions the couple peeled off in her restored C-10 pickup

And Booker was seen by her side in khaki pants and a white T-shirt, layering a black jacket over the look.

The shooting guard looked to be unwinding for the day with his super famous girlfriend ahead of his fourth playoff game against the Los Angeles Lakers.

The pair have continued to go increasingly public with their relationship since they were first romantically linked last July.

On Saturday the model shared a photo dump of her latest adventures, with one snap of Booker asleep in the passenger seat of her car next to dog Pyro.

Jenner has not been shy about her affection for the NBA player, paying tribute to him on Valentine’s Day and even rooting him at various basketball games. 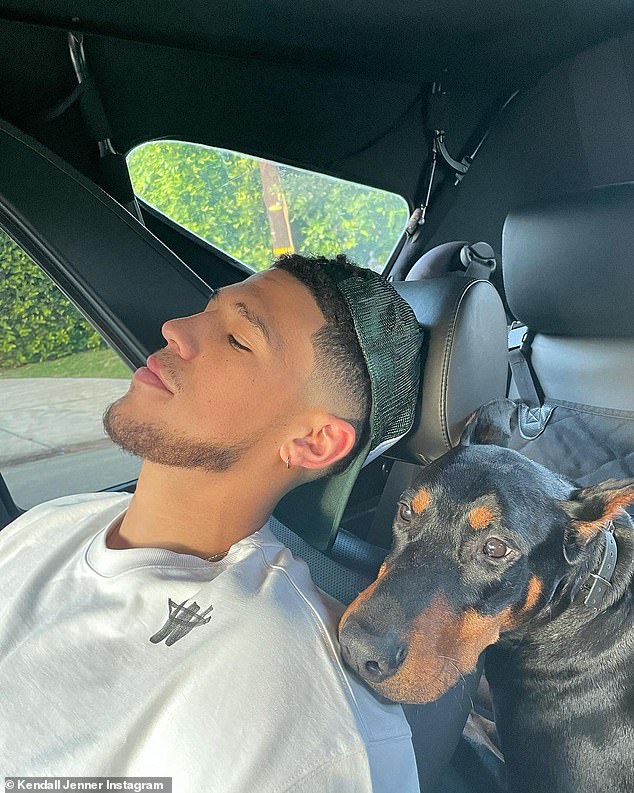 Going public: On Saturday the model shared a photo dump of her latest adventures, with one snap of Booker asleep in the passenger seat of her car next to dog Pyro 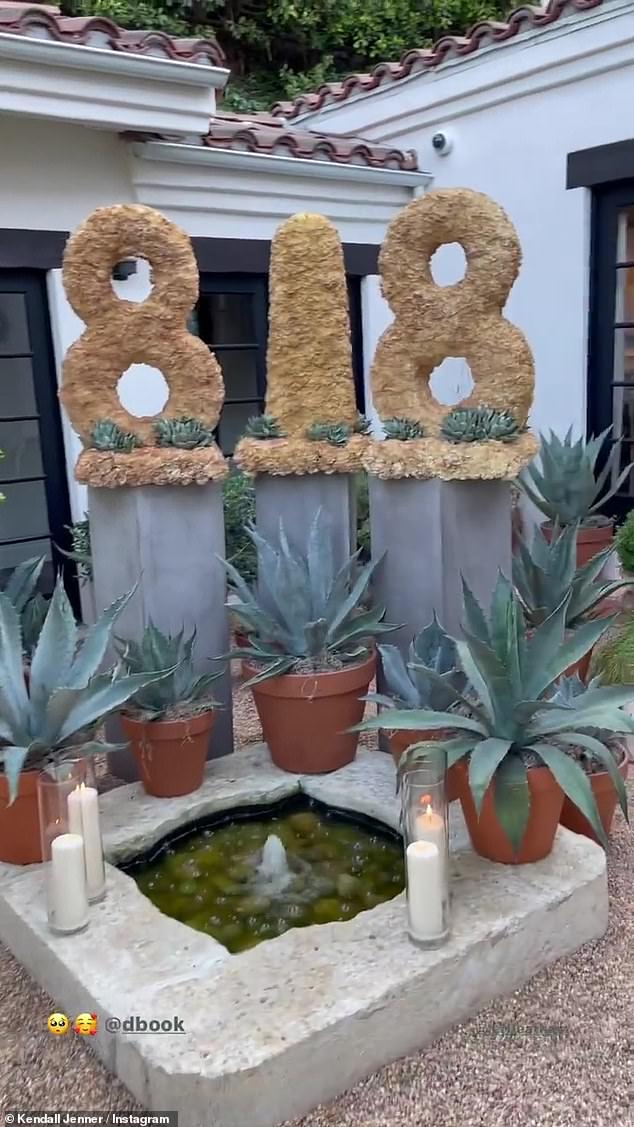 Lavish gifts: To celebrate the launch of her 818 Tequila, Booker surprised her with a floral display 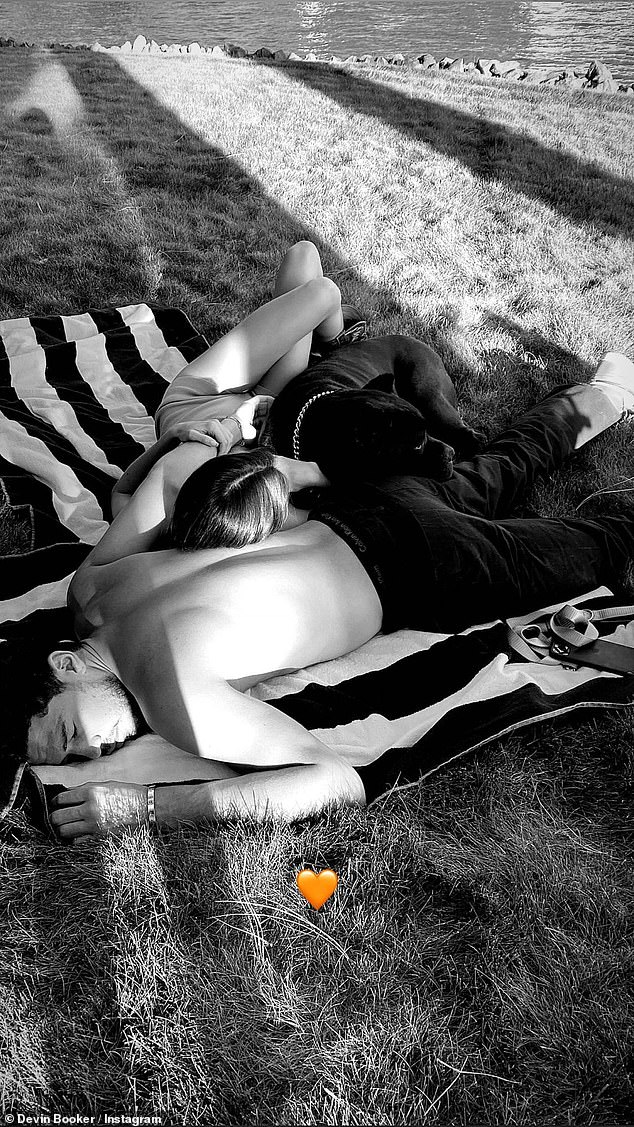 Getting serious: ‘This is the happiest Kendall has ever been in a relationship,’ a source told People last month

And after his team suffered a devastating loss against The Lakers this week, Kendall was there to comfort him in his hotel room at the Ritz Carlton.

But the support goes both ways, as he surprised the model with an over the top floral display to celebrate her 818 Tequila launch last week.

Last month a source told that Kendall is the ‘happiest,’ she’s ever been in a relationship and that the pair have ‘something special going on.’

‘This is the happiest Kendall has ever been in a relationship. She and Devin started out slowly, but have dated for about a year now….[it’s] ‘obvious that they have something special going on.’ 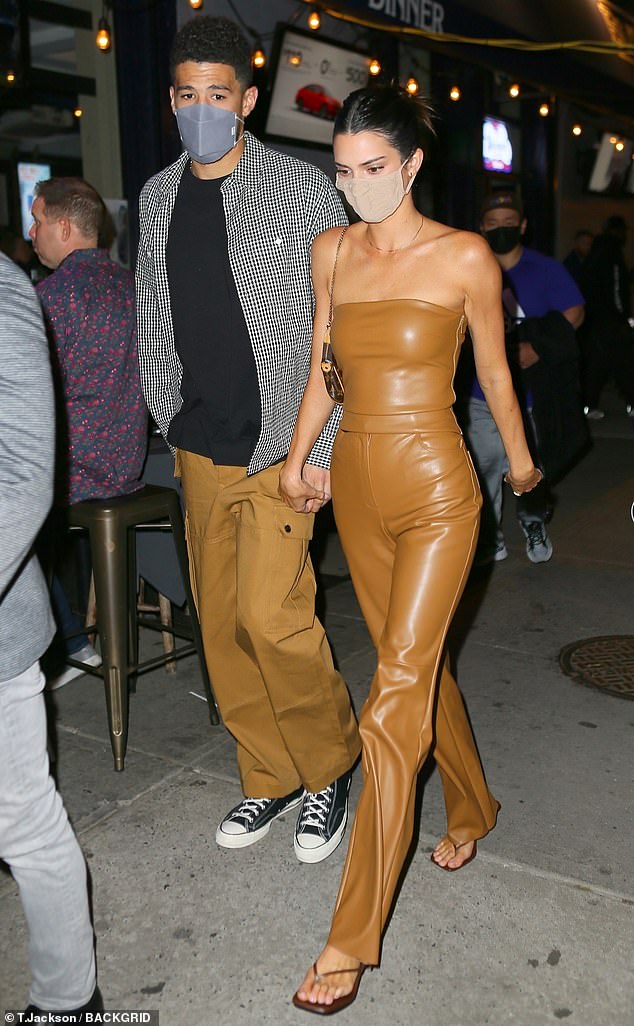 Lila, 19, and Lottie Moss, 23, prove to be every inch fashion family 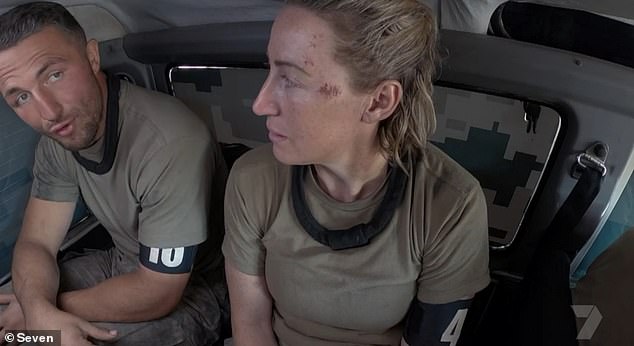 SAS Australia: Sam Burgess says he and ex-wife Phoebe were ‘just not meant for each other’ 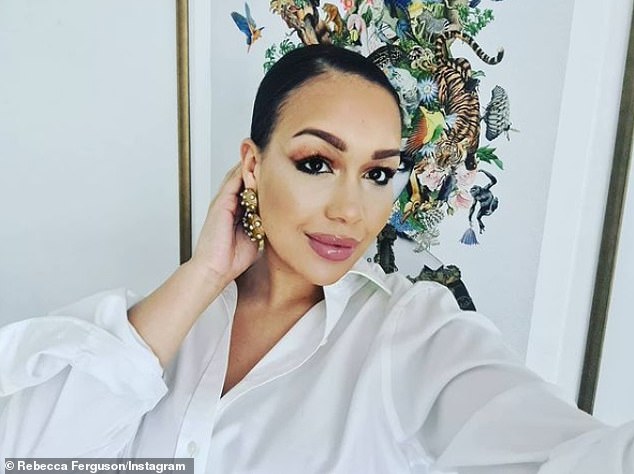 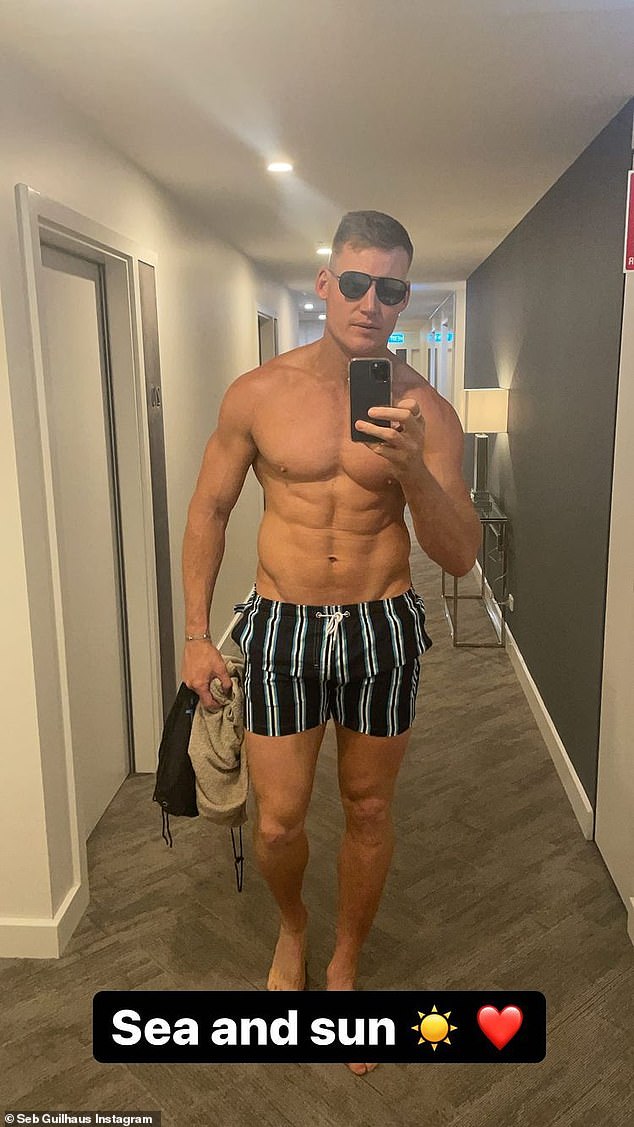 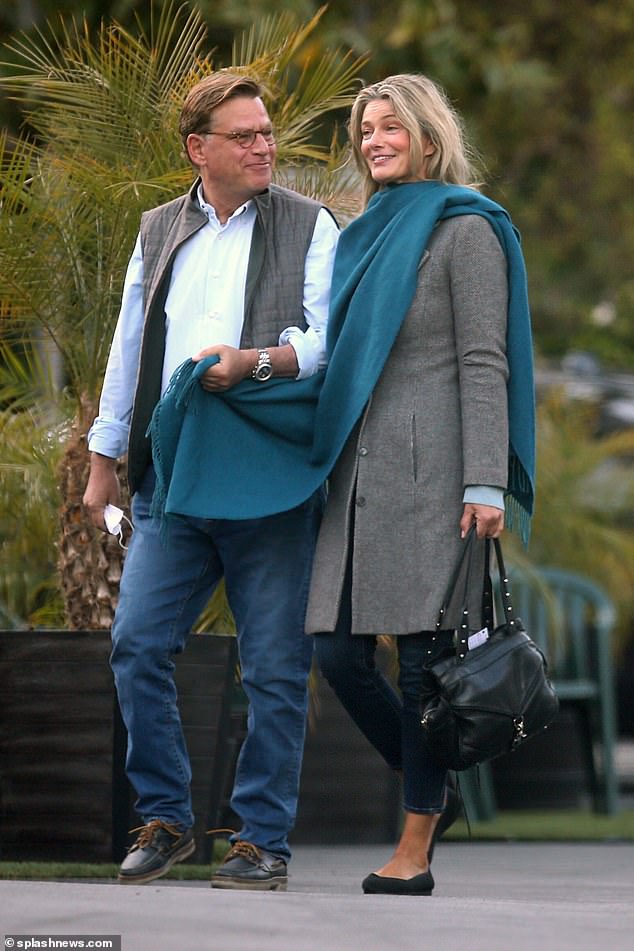 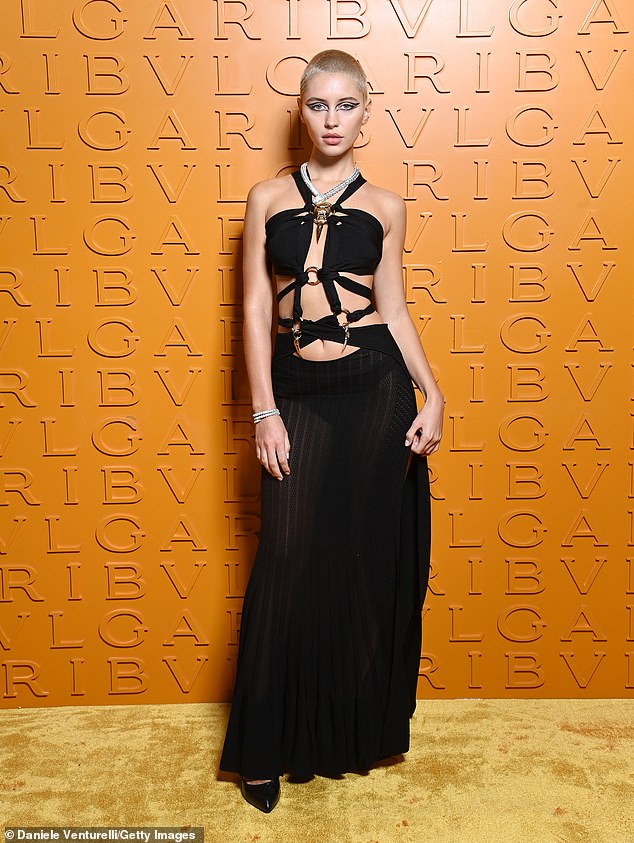 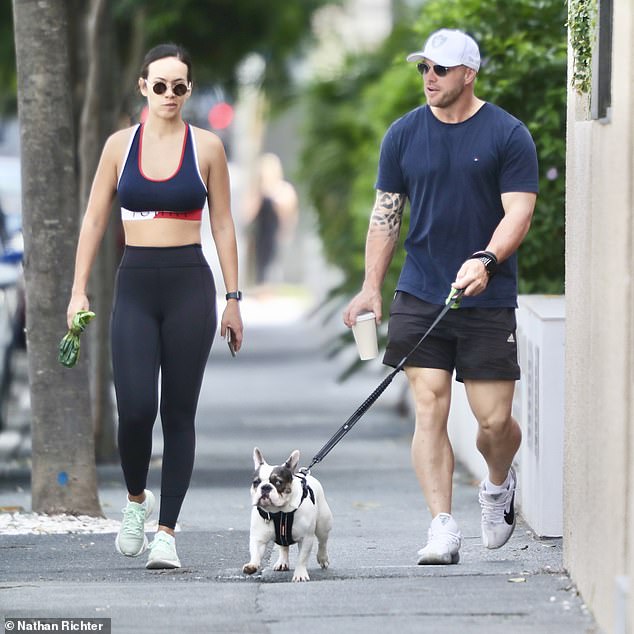