The Associated Press has been accused of lying about whether it knew Hamas maintained a military presence in its Gaza headquarters.

forces destroyed Jala Tower which had been the AP’s headquarters in the Palestinian territory for 15 years, and was also where Al Jazeera was based.

Politicians and journalists in the United States rushed to condemn the bombing, claiming the Israelis had endangered the lives of the journalists.

Israel said it had given the media outlets an hours’ warning to get out of the building before the bombing, and that it was a legitimate target because it housed Hamas military forces.

AP President and CEO Gary Pruitt said in a statement that he was ‘shocked and horrified that the Israeli military would target and destroy the building housing AP’s bureau and other news organizations in Gaza.’ He also claimed that the AP didn’t know that Hamas was ‘active in the building.’

But a 2014 report in written by journalist Matti Freidman suggested Associated Press were well aware of Hamas’s presence in the building – and chose not to report it.

‘When Hamas’s leaders surveyed their assets before this summer’s round of fighting, they knew that among those assets was the international press,’ the article states, referring to an outbreak of fighting that year. 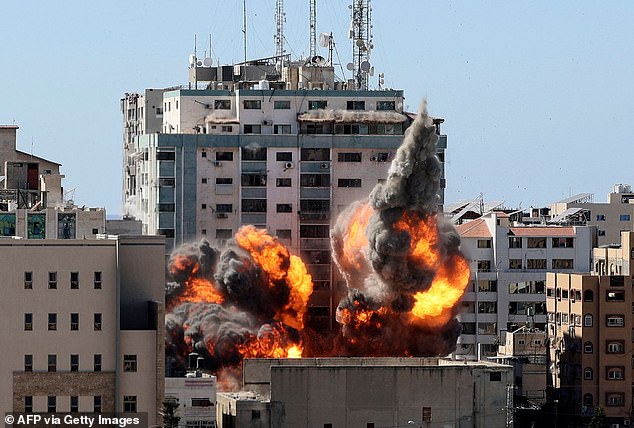 Pictured: A ball of fire erupts from the Jala Tower as it is destroyed in an Israeli airstrike in Gaza City. The 12-storey block in Gaza City brought down by Israeli air strikes housed the U.S. Associated Press and Qatar-based Al Jazeera media operations 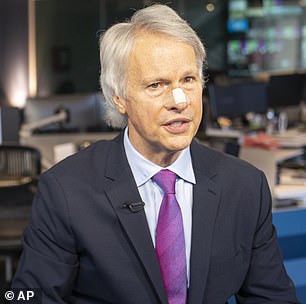 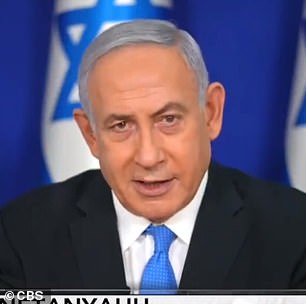 Gary Pruitt, left, President and CEO of the Associated Press, claimed not to know Hamas maintained a presence in the building where Gaza’s headquarters is situated. Israeli Prime Minister Benjamin Netanyahu, above, told Face The Nation ‘it’s because we took special pains to call people in those buildings, to make sure that the premises were vacated’ that no-one was murdered

‘The AP staff in Gaza City would witness a rocket launch right beside their office, endangering reporters and other civilians nearby—and the AP wouldn’t report it,’ Freidman wrote.

The journalist at the time claimed that Hamas fighters would regularly ‘burst into the AP’s Gaza bureau and threaten the staff—and the AP wouldn’t report it.’

Appearing on Face The Nation on Sunday, Israeli Prime Minister Benjamin Netanyahu said the media agencies had received plenty of warning to evacuate the building.

‘One of the, I think, AP journalists said we were lucky to get out,’ told Face The Nation on Sunday.

‘No, you weren’t lucky to get out. It wasn’t luck. It’s because we took special pains to call people in those buildings, to make sure that the premises were vacated.’

Israel has said it shared ‘smoking gun’ evidence Hamas operated in the building with the US in a call Saturday.

President Joe Biden ‘found the explanation satisfactory’, according to a source close to the Israeli foreign ministry.

A day earlier, 42 people were killed in Israeli airstrikes on Gaza early Sunday, the deadliest attacks in the latest round of violence between Israel and Hama.

Netanyahu has so far resisted attempts to reach a ceasefire, and signaled the war would rage on. 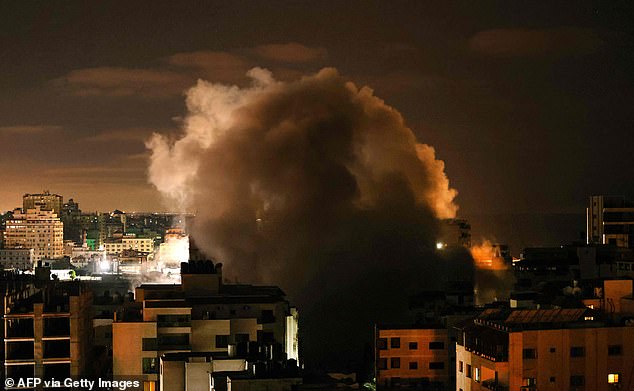 Smoke billows after an Israeli airstrike struck the Andalus Tower in Gaza city, controlled by the Palestinian Hamas movement, on May 15, 2021 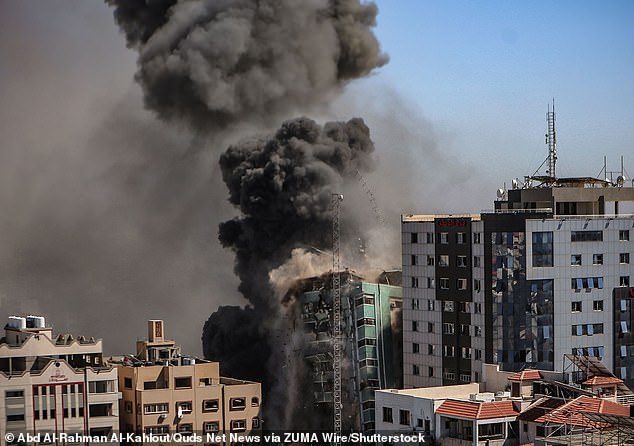 Smoke billows from the 12-story Jala Tower after it was bombed by the IDF. Journalists were given an hours’ notice to get out before the strike

The bombing of the 12-story Jala Tower in Gaza came after days of intense fighting between Palestinians and Israelis.

Israel launched bombing raids of its own on targeting Hamas forces in Gaza, but as the designated terrorist organization embeds its military operations within civilians areas of the densely populated city, dozens of civilians were killed.

After the AP’s offices were bombed, White House press secretary Jen Psaki tweeted that the U.S. had ‘communicated directly to the Israelis that ensuring the safety and security of journalists and independent media is a paramount responsibility’.

Both Pruitt, the AP’s chief executive, and Sally Buzbee, AP’s executive editor, said they had no prior knowledge of Hamas maintaining military offices in the building.

Buzbee, who was last week named as the new executive editor at the Washington Post, called on the Israeli government to provide clear evidence supporting its attack.

‘We are in a conflict situation,’ Buzbee said. ‘We do not take sides in that conflict. We heard Israelis say they have evidence; we don’t know what that evidence is.’ 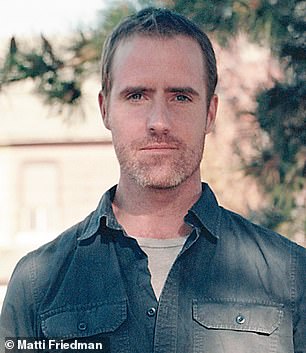 Writing in The Atlantic in 2014, journalist Matti Friedman said ‘Hamas fighters would burst into the AP’s Gaza bureau and threaten the staff—and the AP wouldn’t report it’

But the 2014 Atlantic article appeared to show journalists had been aware of their presence since at least 2014.

The AP came were criticized on social media for the apparent oversight.

One person shared The Atlantic article on Twitter, and commented: ‘@AP didn’t know about sharing a building w/ Hamas for 15 years?’

‘Doesn’t say much for their reporting abilities if they missed a Hamas staging office a floor away,’ another tweeted.

IDF Spokesperson Hidai Zilberman defended the decision to bomb the building, the Times of Israel reported.

‘We’re in the midst of an operation. They are firing wherever they want, on a civilian population, on cities that have tens and hundreds of thousands of people. Think for a second about all the people you mentioned, imagine what they would say if one rocket — one! — were fired at Washington. I want to know what they would say,’ Zilberman says.

‘A building that has Hamas and Islamic Jihad assets in it needs to be brought down.’

The bombing came at a time of increased tensions and suspicions between the international press and the Israeli Defense Force.

On Friday, the IDF tricked Hamas into believing a ground invasion was underway last night and then obliterated their tunnel network knowing militants would be hiding underground waiting to ambush tanks and soldiers, reports in Israel claim.

There was confusion when the IDF said shortly after midnight that ground forces were ‘attacking in Gaza’, and later suggested that boots were on the ground. A spokesman later retracted that statement – saying that military operations were conducted along the border, but no Israeli troops had crossed it.

However, the announcement was apparently a well-planned ploy to get Hamas to send its fighters into its underground tunnel system beneath Gaza City, before bombarding the area, in the hope of eliminating large numbers of militants in one fell swoop.

Soldiers and tanks with drones equipped with night vision lay in wait for survivors as they surfaced, hitting them with aerial and ground fire. Snipers and missile units were also waiting for them on the ground as the IDF said it had carried out a ‘complex’ operation to destroy Hamas tunnels underneath Gaza City, which the military refers to as ‘the Metro’. 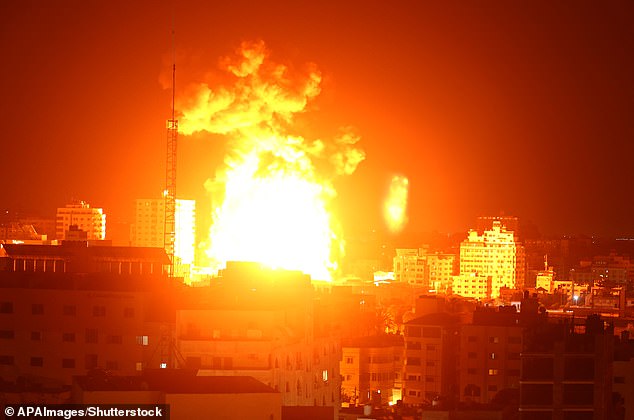 Fire and smoke rise above buildings in Gaza City as Israeli warplanes target the Palestinian enclave, early on May 17, 2021. Deadly violence erupted across the West Bank amid a massive aerial bombardment in Gaza and unprecedented unrest among Arabs and Jews inside the country

On Sunday evening US EST, the IDF said it had targeted the homes of nine Hamas commanders throughout the Gaza Strip during its strikes over the last several hours.

‘The houses attacked were used as terrorist infrastructure and in some of the houses, weapons depots were even found,’ an IDF spokesman said.

It came after air-raid sirens had sounded for the seventh consecutive day across southern Israel, as Hamas and other militant groups in Gaza launched more rocket attacks into the country.

After a specially-convened meeting of the United Nations Security Council, the secretary general, António Guterres, said the Israeli-Palestinian conflict was heading for an ‘uncontainable security and humanitarian crisis’.

Biden has spoken to both Israeli Prime Minister Benjamin Netanyahu and Palestinian President Mahmoud Abbas in an effort to restore calm. 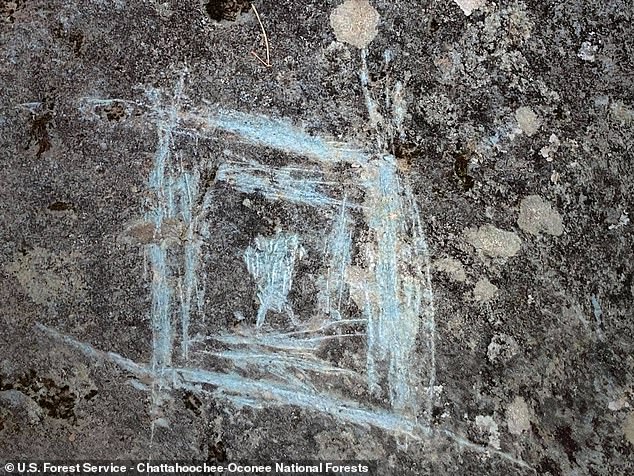 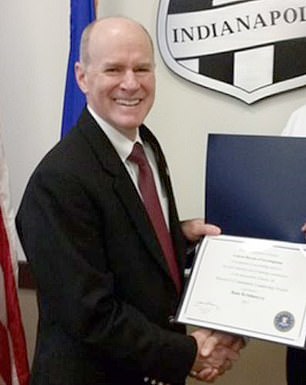 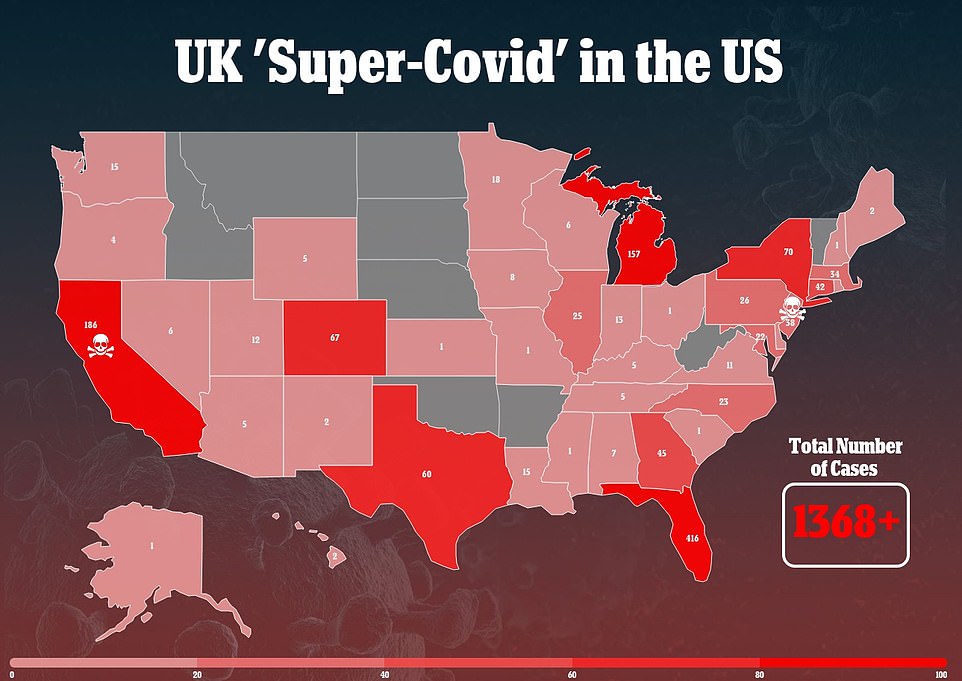 Covid US: Fears as cases of UK ‘super variant’ QUADRUPLE in Florida 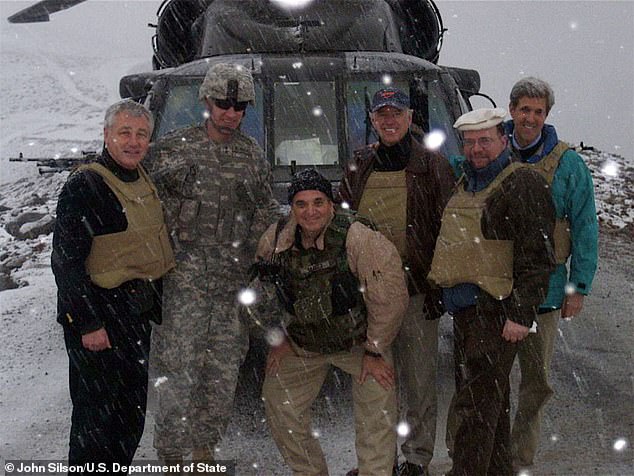 Blackwater rescued Biden from Taliban in 2008 as founder criticized for $6,500 evacuation flights 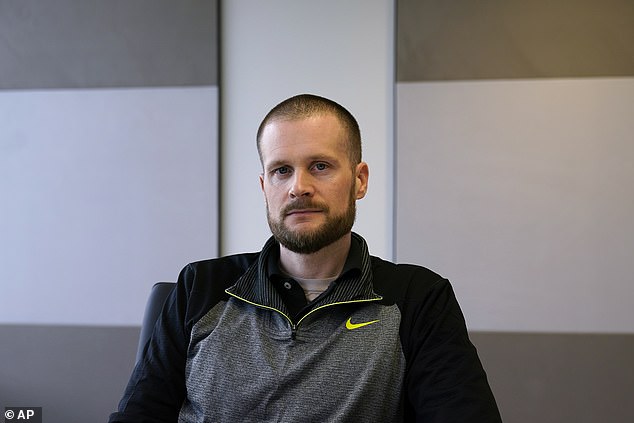 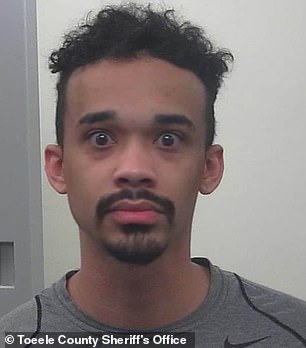 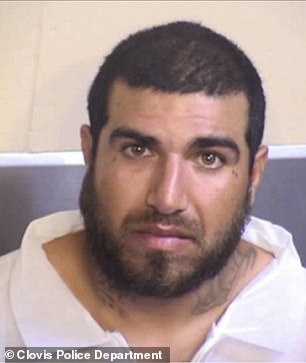 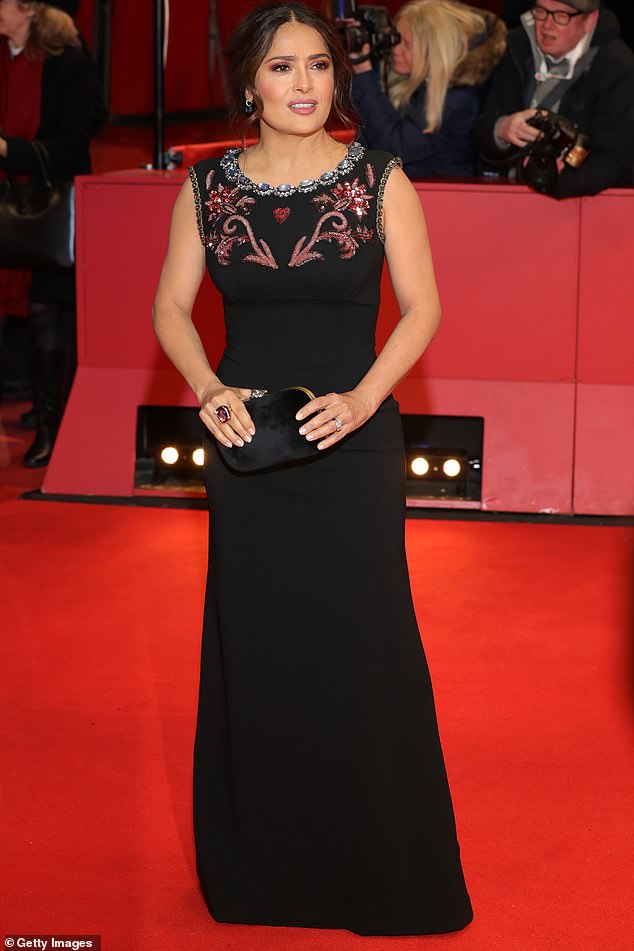