‘s lawyer – who once represented one of Osama Bin Laden’s henchmen – has released the first photo of the jailed socialite since her arrest last year.

So-called ‘superlawyer’ Bobbi Sternheim shared the close-up snap of Maxwell, 58, on Thursday. Her left eye has a bruise underneath, while Maxwell’s usual short dark cropped hairstyle has grown out, and is flecked with gray hairs.

The British socialite’s lawyers included the photo in a court filing Thursday as part of their ongoing concerns about Maxwell’s treatment at Brooklyn’s Metropolitan Detention Center.

Maxwell has only been seen in court sketches until now, as no cameras or recording devices are allowed at hearings.

In a filing to the federal court in New York, Sternheim wrote that on Wednesday evening Maxwell was ‘confronted by MDC staff due a visible bruise over her left eye’.

Sternheim, who represented Al Qaeda terrorist Khaled al-Fawwaz over two US embassy bombings in Africa that killed 224, said Maxwell got what she called a ‘black eye’ despite 24/7 camera surveillance on her at all time.

The filing said: ‘No guard addressed the bruise until Ms. Maxwell, who has no mirror, caught a reflection of her aching eye in the glean of a nail clipper.

‘At that point, MDC staff confronted Ms. Maxwell regarding the source of the bruise, threatening to place her in the SHU if she did not reveal how she got it’ – the SHU is the most restrictive part of the prison. 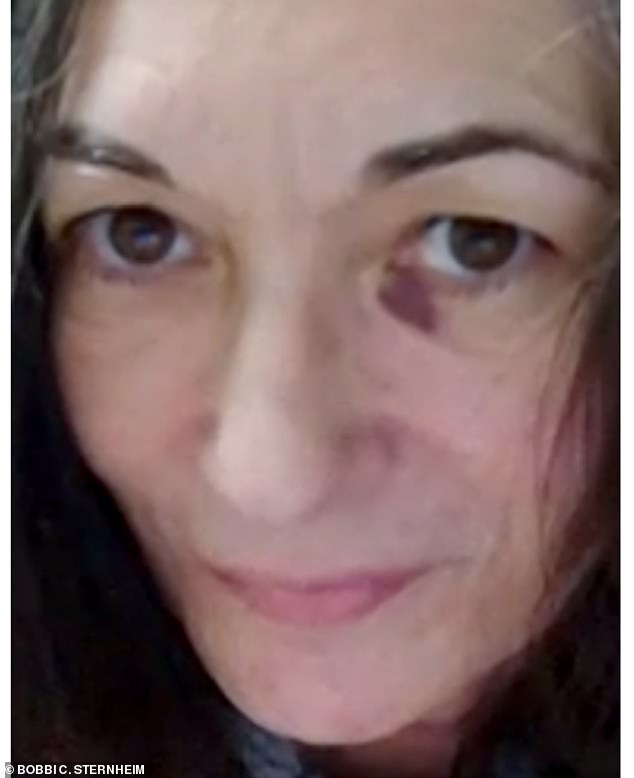 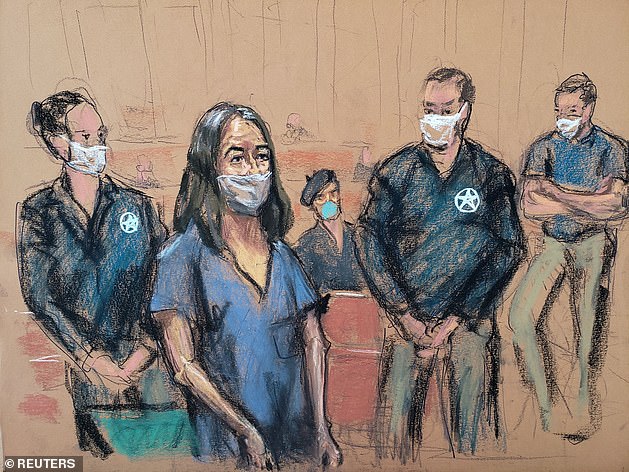 Ghislaine Maxwell (pictured in a court sketch from her latest court appearance last week) lost her fourth bail hearing in New York and is therefore likely to remain in prison until her trial, currently scheduled for July 12

Despite claiming to have no mirror, Maxwell appears to manage some level of maintenance with well-plucked eyebrows clearly on display.

The letter continued: ‘While Ms. Maxwell is unaware of the cause of the bruise, as reported to medical and psych staff, she has grown increasingly reluctant to report information to the guards for fear of retaliation, discipline, and punitive chores. 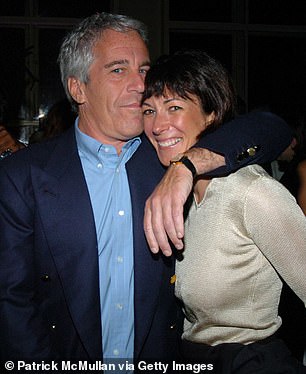 ‘However, there is concern that the bruise may be related to the need for Ms. Maxwell to shield her eyes from the lights projected into her cell throughout the night’.

Sternheim said it would ‘ironic’ if Maxwell were put in the SHU as it would indicate she ‘needs protection from the very staff so intent on protecting her, since she has no contact with anyone but staff’.

Maxwell has been jailed in what she calls ‘hell hole’ conditions since July and on Tuesday lost her latest bail hearing in New York, which means she likely to remain in prison until her trial this summer.

Her claims that she is being mistreated in custody were not enough to persuade a panel of three appeals court judges in New York to overturn the decision to deny her bail.

Sternheim represented al-Fawwaz at his 2014 trial for the 1998 Nairobi and Tanzania bombings. The terrorist admitted his crimes on the day his trial was due to begin, and was jailed for life in 2015.

According to the , Sternheim has been hailed by her peers for her ‘outstanding work and commitment to the spirit of the legal profession.’

Maxwell is accused of recruiting underage girls who were abused by disgraced financier Jeffrey Epstein.

The court considers Maxwell, who has American, British and French passports, a flight risk and she has been denied bail four times.

Maxwell’s lawyer said guards in her Brooklyn jail were keeping her awake at night to ensure she wouldn’t commit suicide like financier and pedophile .

But in a brief order, the 2nd U.S. Circuit Court of Appeals in Manhattan said that to the extent Maxwell is being deprived of sleep, she should seek relief from U.S. District Judge Alison Nathan, who oversees her criminal case. 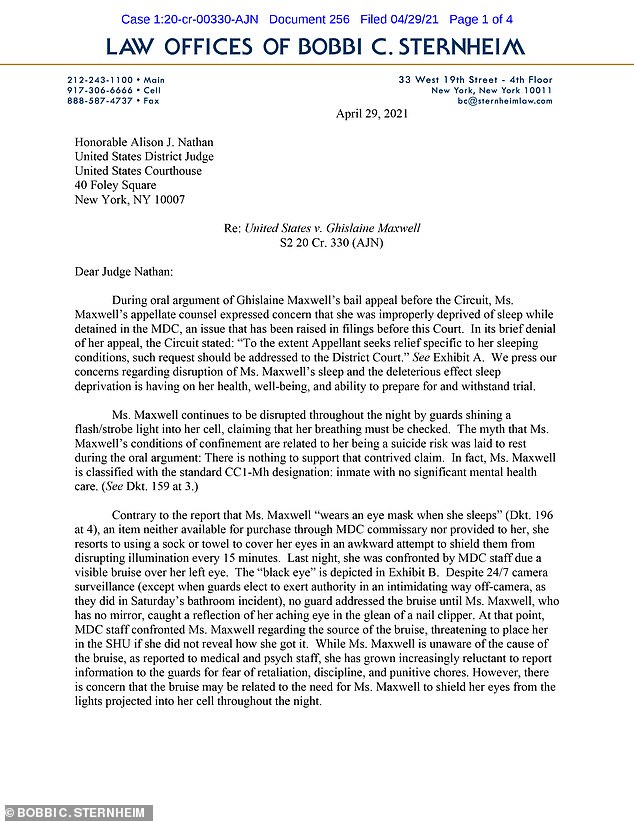 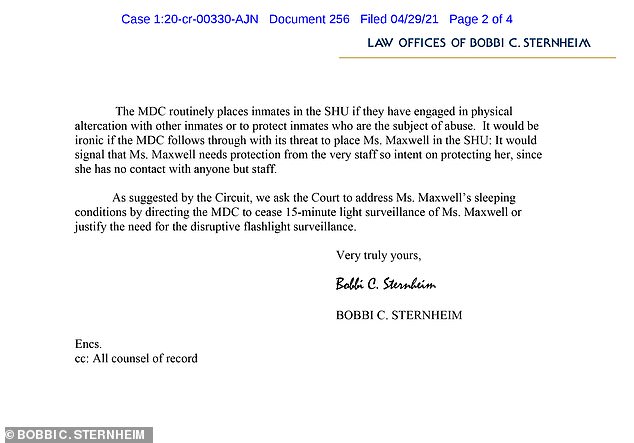 In Thursday’s filing, Maxwell’s lawyer Bobbi Sternheim wrote that on Wednesday evening she was ‘confronted by MDC staff due a visible bruise over her left eye’ 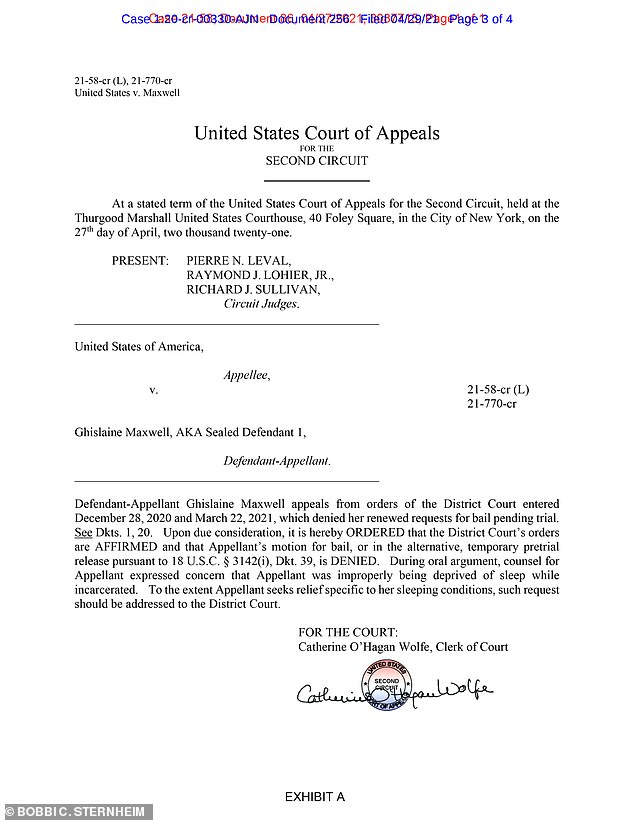 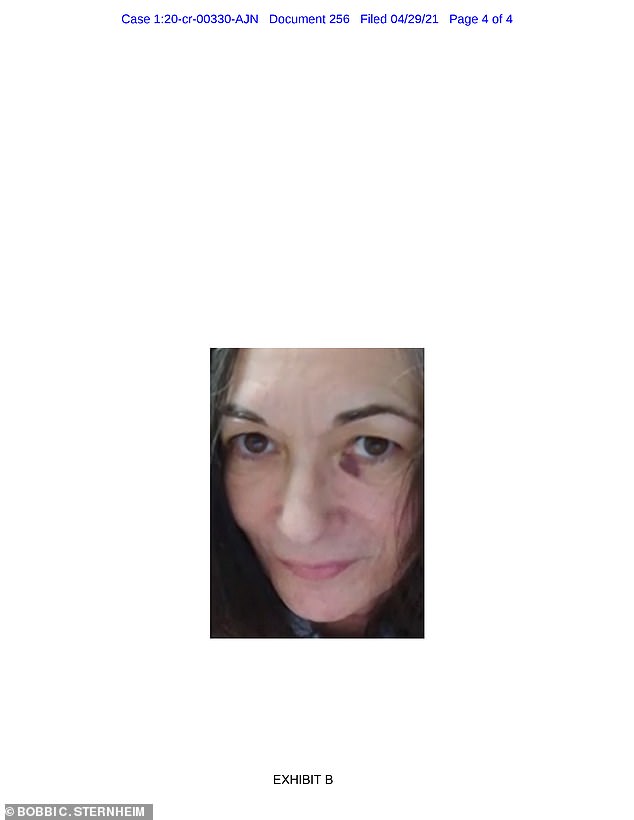 David Markus, Maxwell’s attorney, said he was ‘heartbroken’ by the ruling and the team are now ‘considering our options for next step.’

Maxwell, 59, has pleaded not guilty to sex trafficking and other charges over her alleged role in procuring four teenage girls for Epstein to abuse between 1994 and 2004.

She had been appealing Nathan’s March 22 rejection of a $28.5 million bail package which the judge, who has denied bail three times, said did not keep Maxwell from being a ‘significant risk of flight.’

In oral arguments on Monday, Markus objected to jail guards’ waking Maxwell every 15 minutes with flashlights to make sure she was still breathing.

‘We just want a fair opportunity, a fair chance, so she can get ready for the trial of her life,’ Markus told the appeals court. ‘It’s impossible to prepare for trial when you’re getting no sleep.’

Maxwell faces up to 80 years in prison if convicted. She is seeking a delay in her trial that is currently scheduled for July 12, 2021.

Earlier this week,  accused prison guards of intimidating and humiliating her by standing over her while she used the toilet after she was ‘falsely accused’ of being in possession of illegal documents behind bars.

Just weeks ago, she was called out by guards for not flushing the toilet, a claim she adamantly denied blaming rotting pipes for causing the stench.

Pictured: The Metropolitan Detention Center (MDC) where Ghislaine Maxwell is being held. After losing her fourth bail hearing on Wednesday, she is likely to remain there until her trial

In a letter submitted to a judge on Monday by attorney Bobbi Sternheim, the British socialite, 59, claimed a senior guard at the Metropolitan Detention Center in Brooklyn stood ‘knee to knee’ with her while ‘she sat on the commode’ on Saturday.

Moments earlier, guards had confiscated some documents from Maxwell which they claimed she had obtained by her lawyers during a visit in breach of prison protocol.

In court papers obtained by DailyMail.com, Maxwell’s legal team denied the violation and claimed that the guards waited until her lawyers were gone and ‘took undue advantage of her.’

Her lawyers and prosecutors have previously argued about whether Maxwell can wear an eye mask and whether or not she is flushing the toilet in her cell.

In Monday’s filing, Sternheim said she and fellow attorney Leah Saffian attended a scheduled two-and-half hour in-person legal conference with Maxwell on Saturday during which they were under ‘constant watch of four to five guards.’

After the meeting, she received an email from MDC legal counsel Sophia Papapetru, who claimed had Maxwell ‘received paperwork that was not in her possession upon entering the legal visiting area.’

Papapetru cited MDC rules which ban lawyers from giving clients materials during a legal visit and said the documents had been confiscated and would be given back to Sternheim during her next visit. 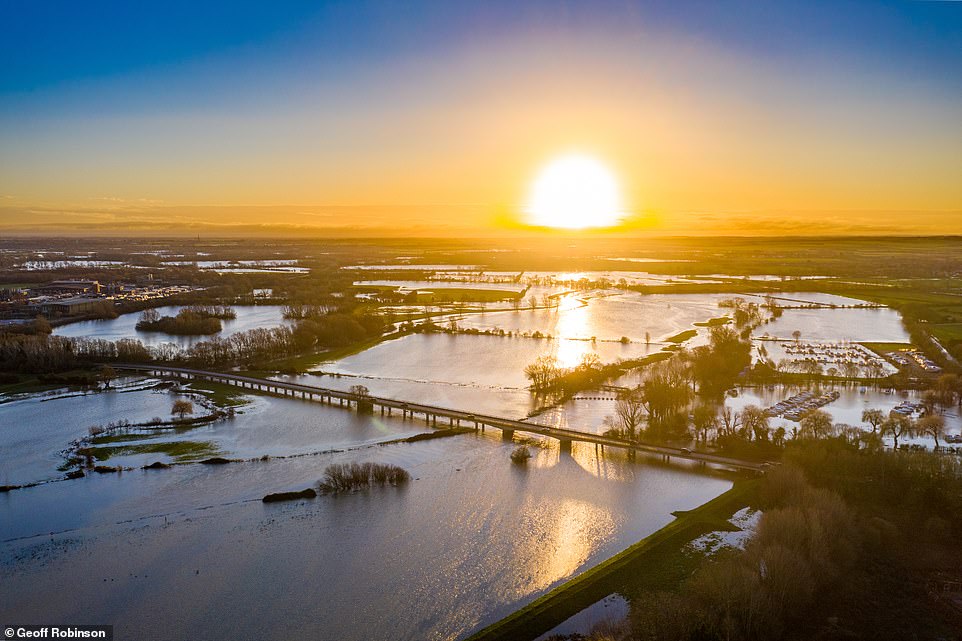 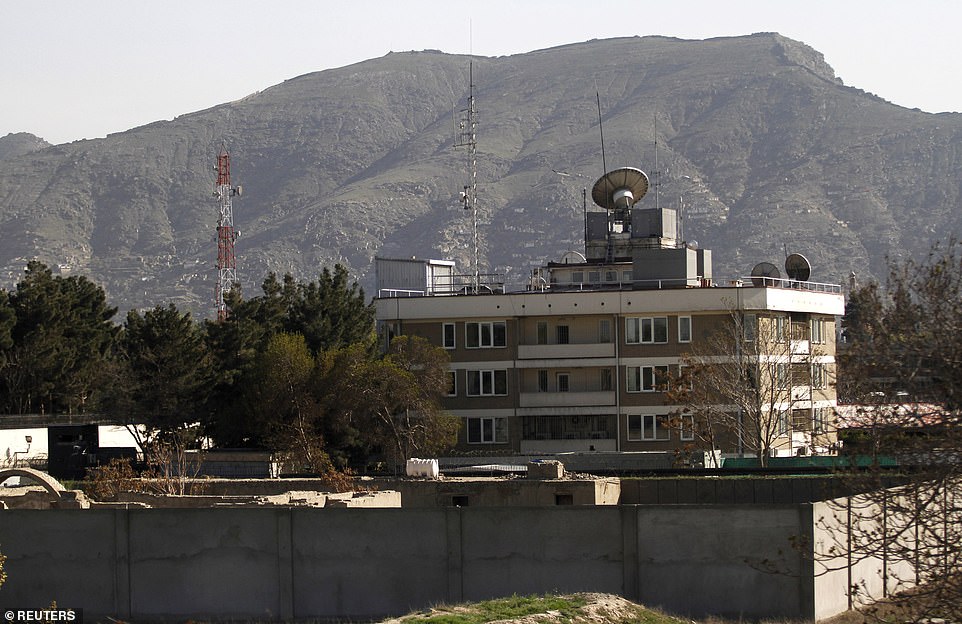 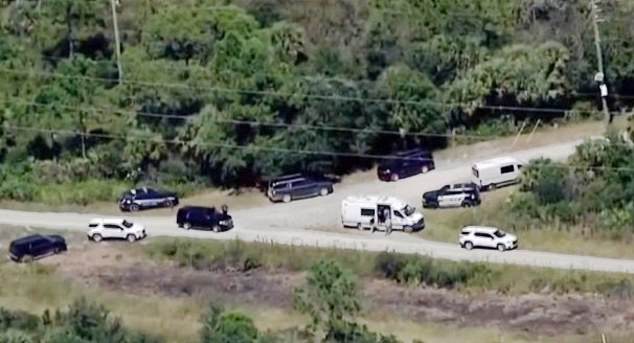 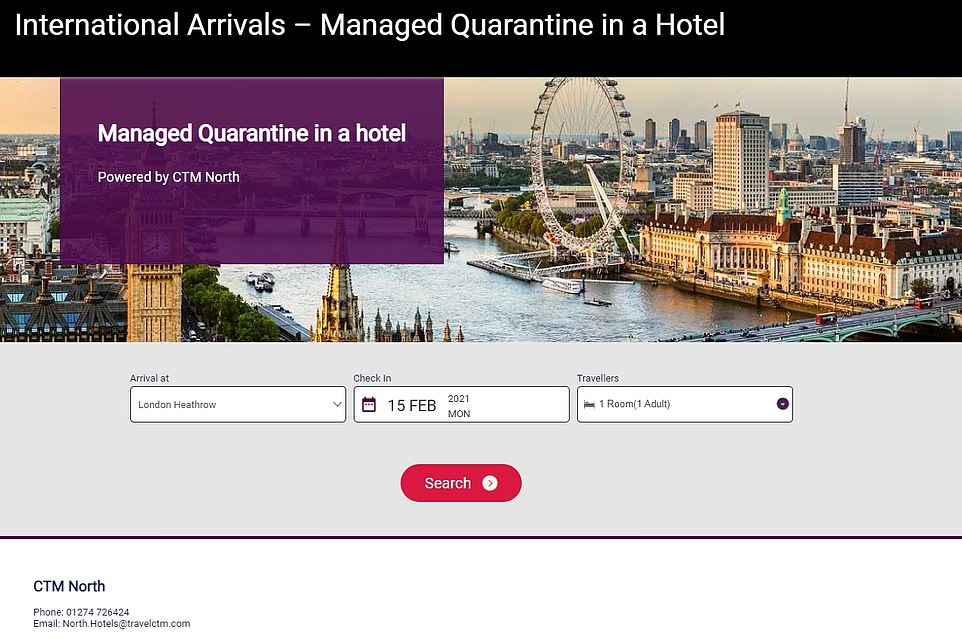 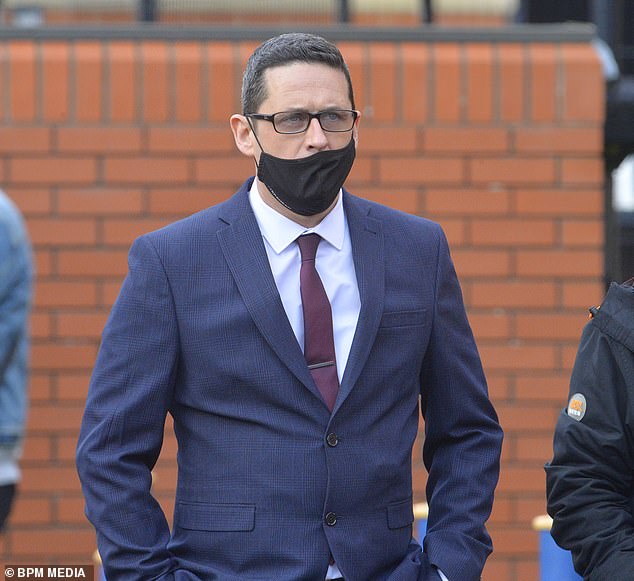 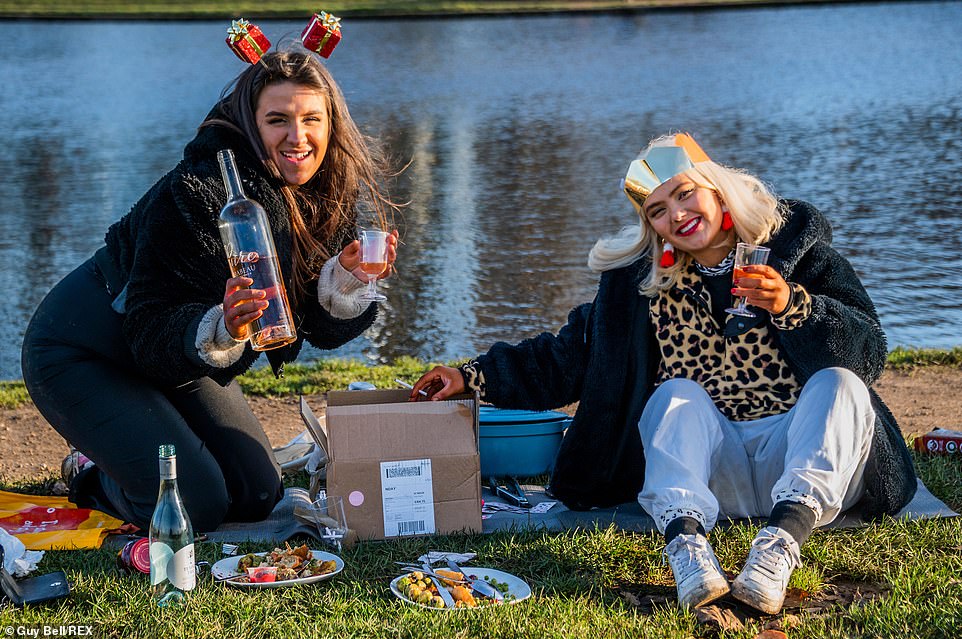 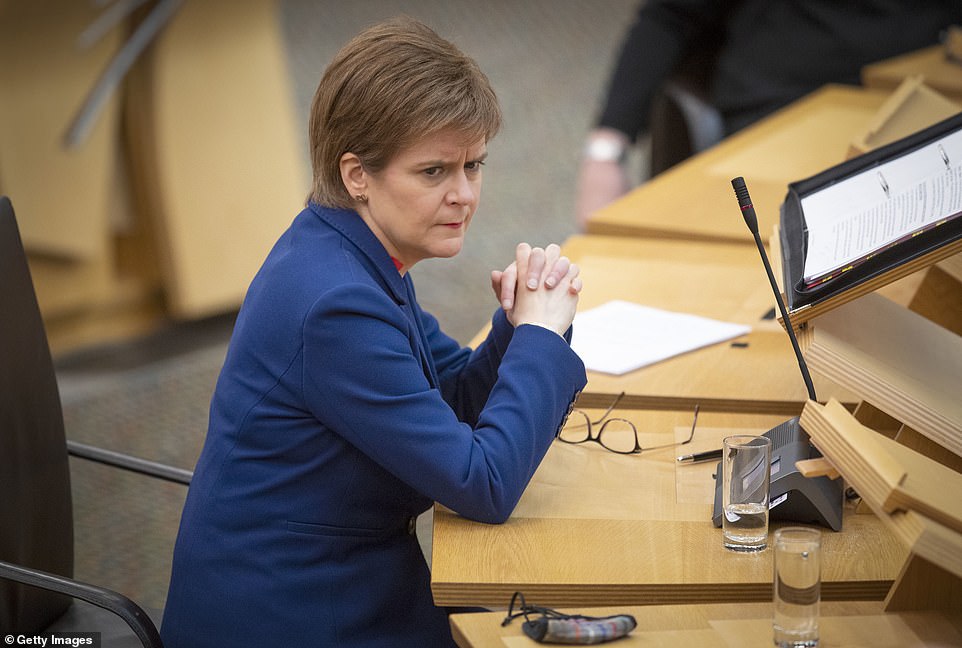