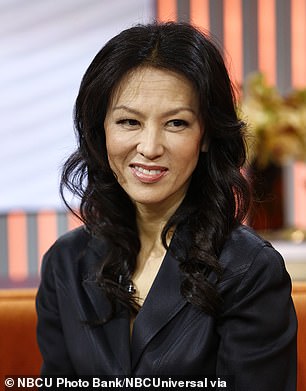 Yale Law professor Amy Chua, 58, has been banned from leading a first-year small group – an informal group of students – over allegations of violating an agreement to stop hosting dinner parties for students

Yale Law professor Amy Chua, best known for coining the term ‘Tiger Mom,’ is hitting back after being sidelined from mentoring first-year students over allegations she had continued hosting alcohol-fueled dinner parties at her home in violation of a prior agreement with the school.

Chua wrote an open letter to the entire Yale Law School faculty on Thursday, denying the claims laid out in a article, and contending that she is being punished over false allegations from a small group of students who oppose her ‘controversial’ opinions.

Chua, 58, a married mother-of-two Harvard graduate who has taught at Yale Law since 2001, is known around the world for publishing a book on parenting in 2011 titled Battle Hymn of the Tiger Mom, in which she touted the ‘Chinese way’ of rearing her two daughters over the ‘Western way,’ and talked about denying her daughter Lulu a bathroom break during a piano lesson. 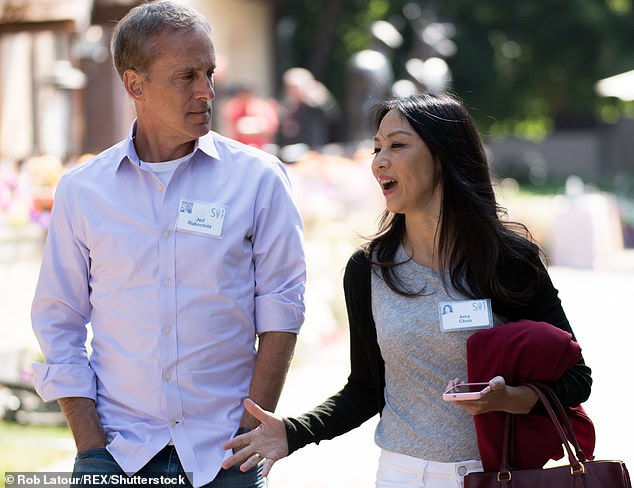 The latest controversy erupted last week, when Yale’s independent student newspaper published a story, revealing that Chua has been suspended from leading a first-year ‘small group,’ which is an informal learning group comprised of about 15 students that meets outside classroom.

According to the article, the decision to strip Chua of her leadership role was made after multiple students have come forward, claiming that the professor had been hosting dinner parties at her home during the pandemic, with her husband present, despite signing a confidential agreement in 2019 that barred her from drinking and having out-of-class interactions with students. 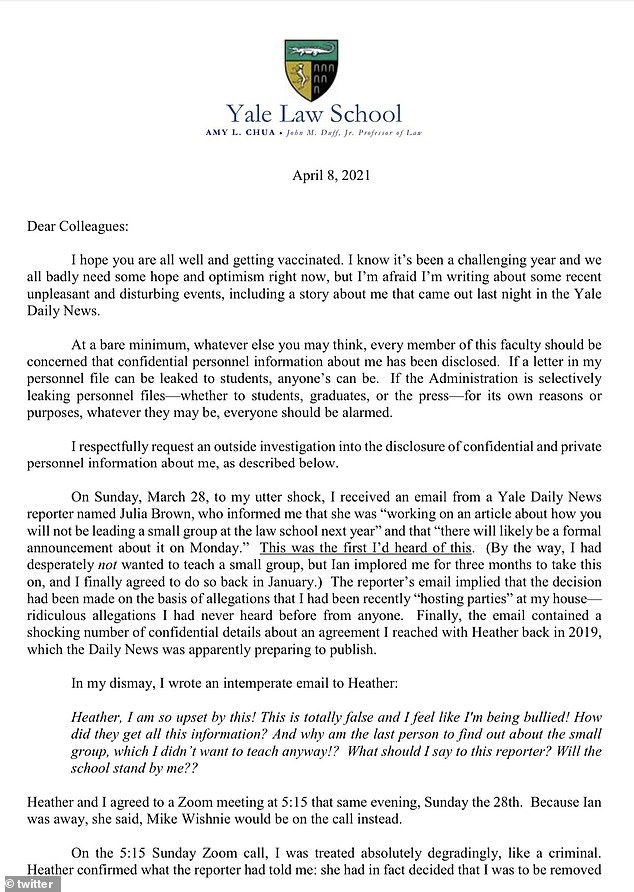 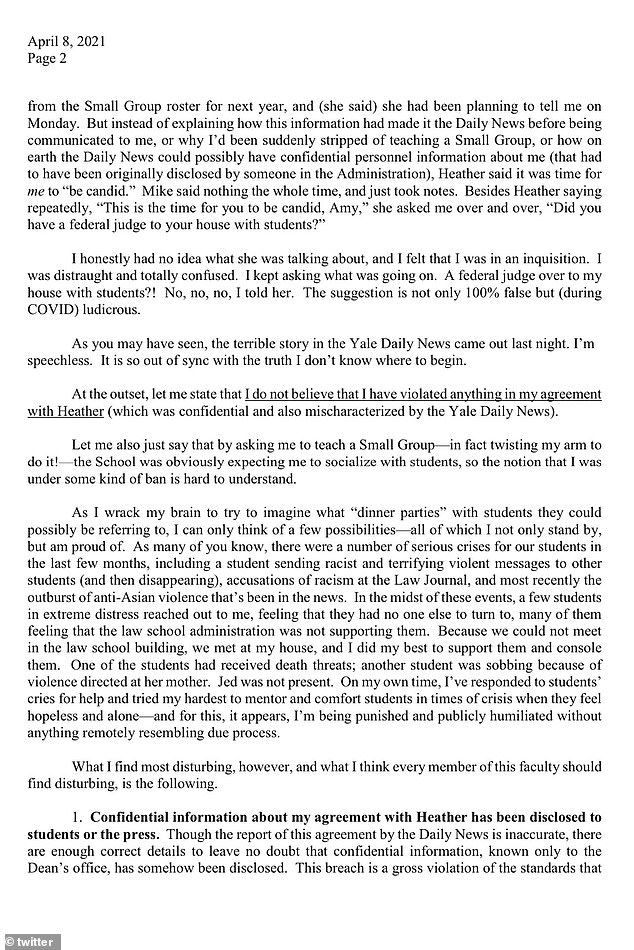 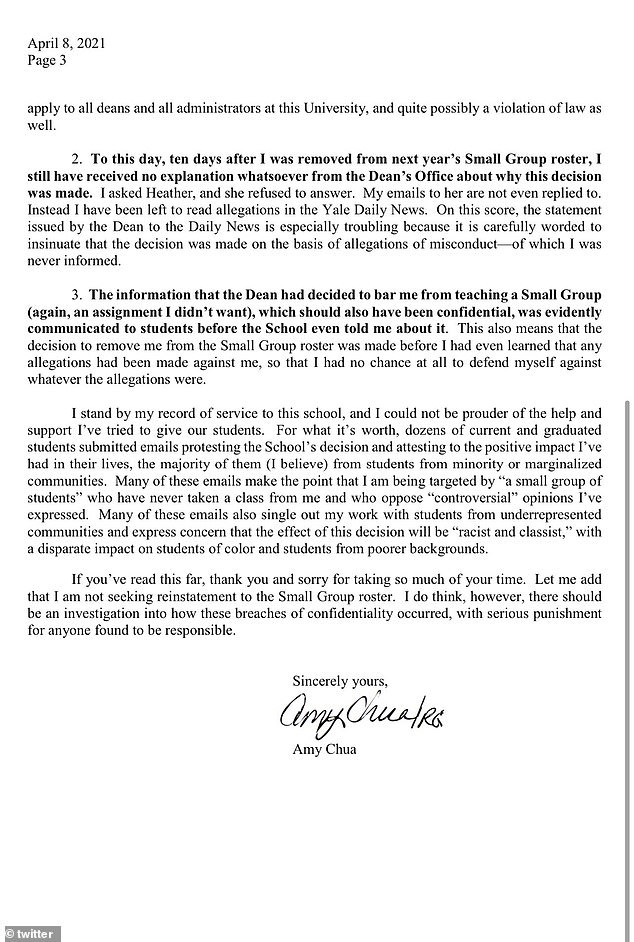 Chua published this open letter on Thursday, defending herself against the accusations 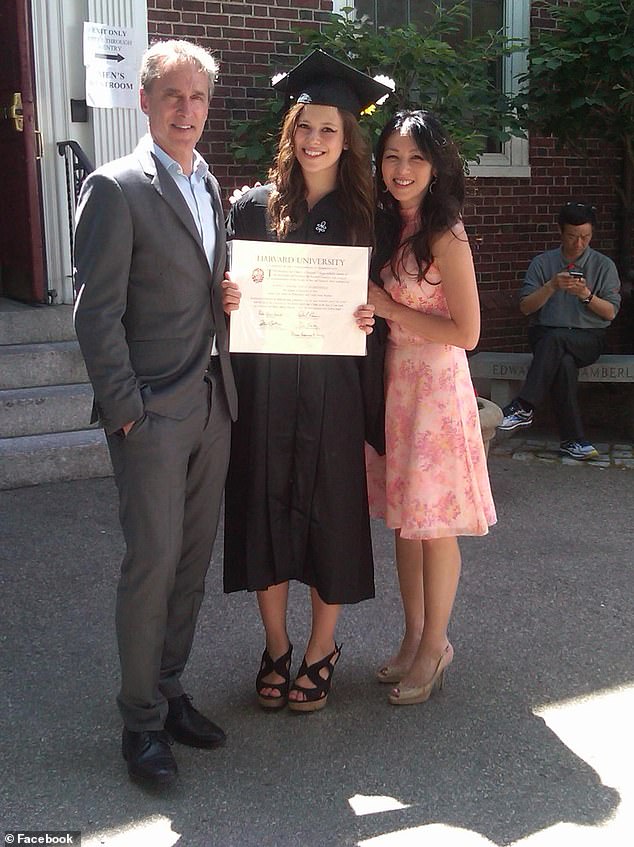 In a December 2019 letter, Law School Dean Heather Gerken wrote that alumni have made claims that Chua drank heavily with students, and made inappropriate remarks about both students and professors.

One recent Yale Law graduate told the Yale Daily News that she witnessed Chua and Rubenfeld ‘deliberate’ on the physical appearances and private relationships of students during dinner parties that she attended at their house in Connecticut.

‘Having been on the receiving end of that behavior, I know personally that it is not always welcome, and that it is not all in good fun,’ the graduate told the student newspaper on condition of anonymity.

According to the dean’s letter cited by the outlet, as part of the 2019 agreement between Yale Law and Chua, the professor would be sidelined from teaching or leading small groups during the 2020-21 school year, and would not resume teaching until the Law School is ‘assured that the kind of misconduct alleged will not occur.’ 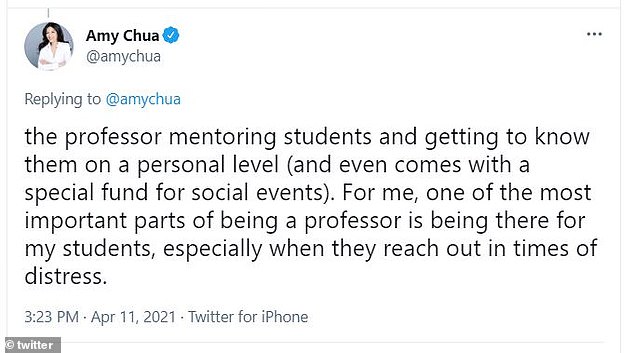 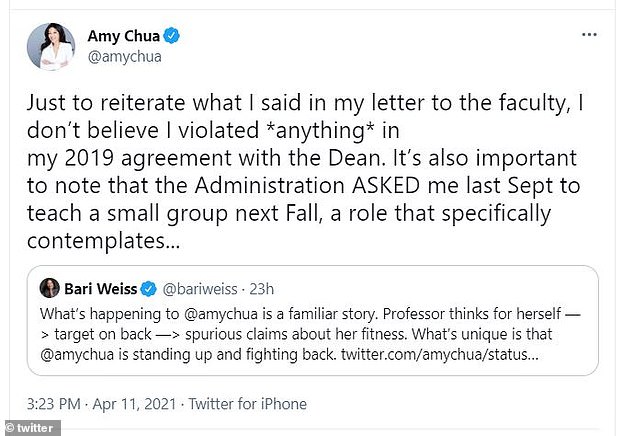 In her rebuttal letter released on Thursday, Chua railed against purported ‘breaches of confidentiality’ that resulted in the details of her agreement with the school being leaked for the press, and she also accused the student paper of mischaracterizing her 2019 agreement with Yale Law.

Chua stressed that she did not want to lead a small group in the first place, and that the administration had to convince her to take on the assignment.

‘Let me also just say that by asking me to teach a Small Group – in fact twisting my arm to do it! – the School was obviously expecting me to socialize with students, so the notion that I was under some kind of ban is hard to understand,’ she wrote.

The article published by the student paper stated that after a two-year hiatus imposed by the agreement, Chua was named a leader of a ‘small group’ in late March.

But less than a week after the public announcement, several law students met with administrators to voice their concerns over Chua’s appointment as a small-group leader.

According to the paper, the students claimed that Chua had continued hosting dinner parties for students at her and Rubenfeld’s home. They were said to have provided documentation in support of their claims.

On her official website, Chua has so far collected and shared 50 pages of letters from current and former students decrying her suspension.

‘It is no exaggeration to say that I owe all my success at this law school to Professor Chua,’ one of her supporters wrote, while another stated: ‘beyond being an incredible teacher, she is an unparalleled mentor at this school.’

Chua vehemently denied the allegations in her letter to faculty members.

‘As I wrack my brain to try to imagine what “dinner parties” with students they could possibly be referring to, I can only think of a few possibilities—all of which I not only stand by, but am proud of,’ she wrote.

She went on to cite several instances where she said she had invited students ‘in extreme distress’ over to her house after they reached out to her for help, having been subjected to death threats amid rising anti-Asian hate crimes, and feeling that the Yale Law administration was not supporting them.

‘Because we could not meet in the law school building, we met at my house, and I did my best to support them and console them,’ Chua said, adding that her husband was not present during those meetings.

She argued: ‘I do not believe that I have violated anything in my agreement with Heather [Gerken].’ 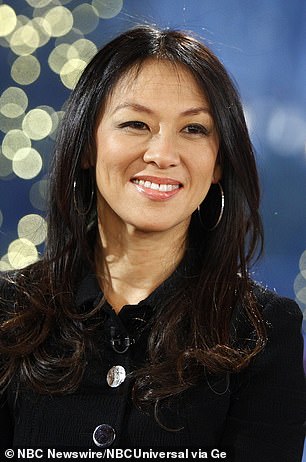 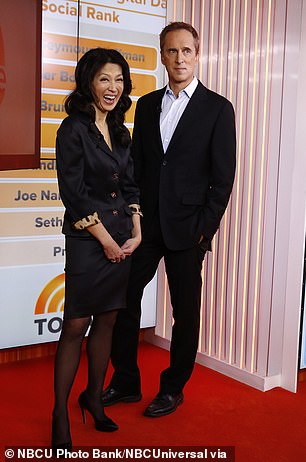 Chua is best known for writing her 2011 parenting memoir Battle Hymn of the Tiger Mom, in which she touted the ‘Chinese way’ of rearing children. Chua and her husband (right) were both previously accused of telling young law students how to dress if clerking for Justice Brett Kavanaugh

Chua said she felt like being ‘punished and publicly humiliated without anything remotely resembling due process,’ and called for an independent investigation into what she described as ‘breaches of confidentiality.’

She concluded by noting that she is not seeking to be reinstated to the small group roster.

In a statement to the student paper, Dean Gerken declined to comment on any specific complaints or investigations, but said that ‘faculty misconduct has no place at Yale Law School. It violates our core commitments and undermines all the good that comes from an environment where faculty respect and support students.’

She went on: ‘the Law School has a set of clearly articulated norms governing student-faculty interactions and is committed to enforcing them.’ 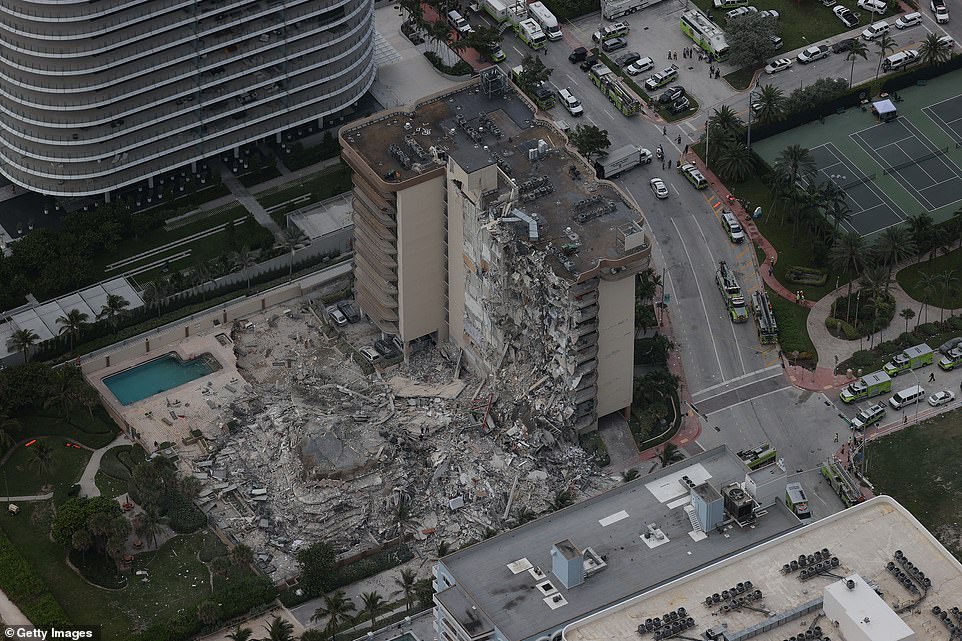 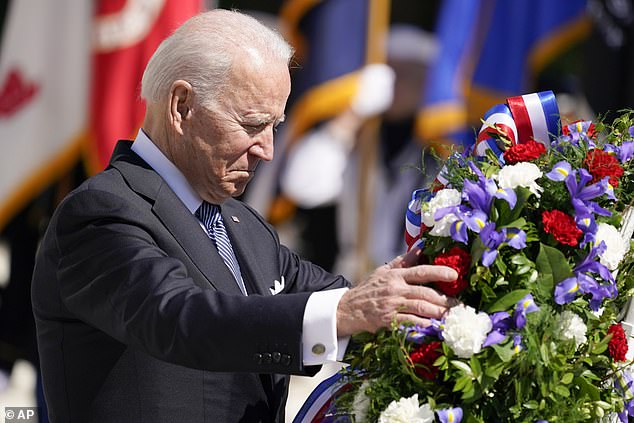 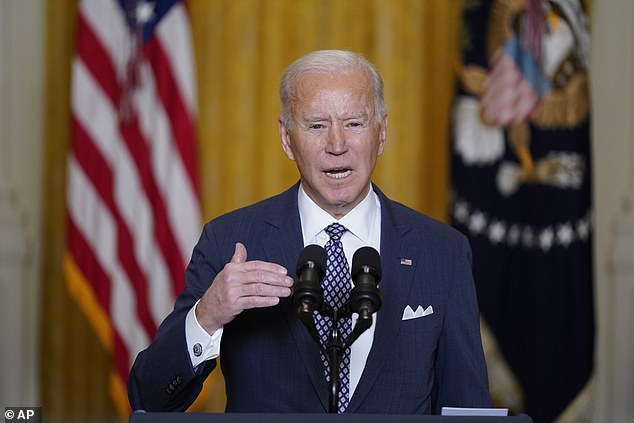 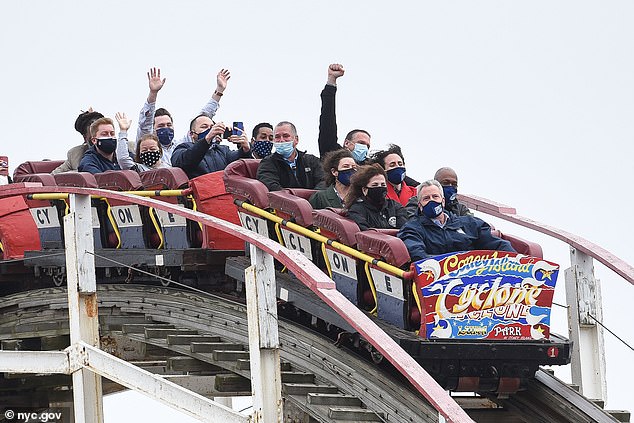 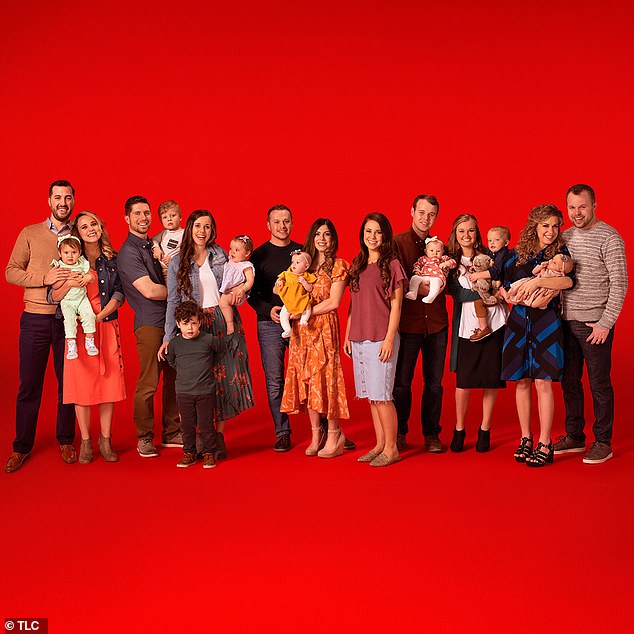 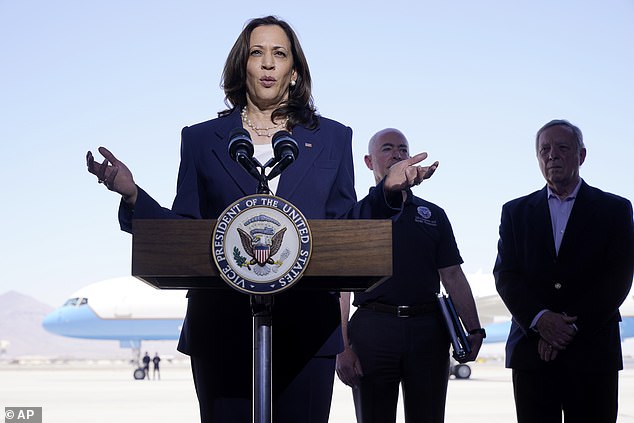 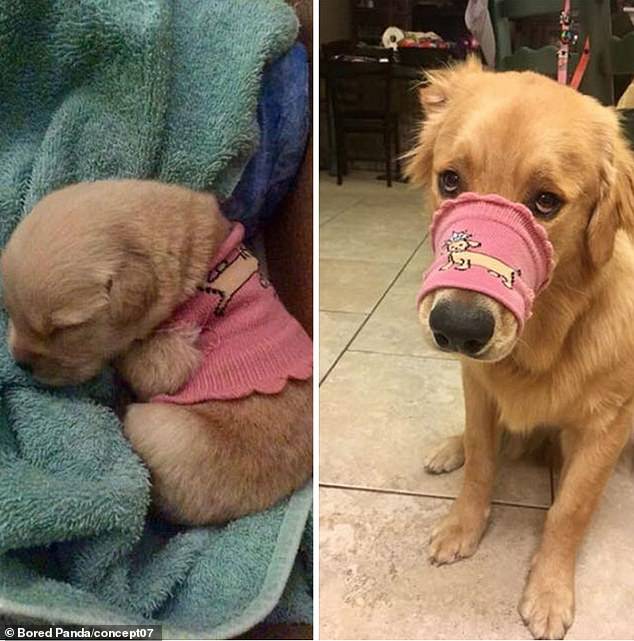