A 24-year-old woman who was left for dead in her hotel room after being drugged and raped had traveled alone to Miami for Spring break, her father has said.

Christine Englehardt, 24, was found dead on Thursday after Evoire Collier, 21, and Dorian Taylor, 24, allegedly gave her a ‘green pill’ and sexually assaulted her at her South Beach hotel.

Englehardt had made the 1,200 mile trip from her home in Bucks Country, Pennsylvania, to Spring break on her own, her father told .

He said he was aware the two men had been charged in connection with her death.

Collier and Taylor appeared in court in Miami on Monday charged with burglary with battery, petty theft, sexual battery and credit card fraud.

They may also face manslaughter or murder charges if the drug they gave her is proven to have played a role in her death. 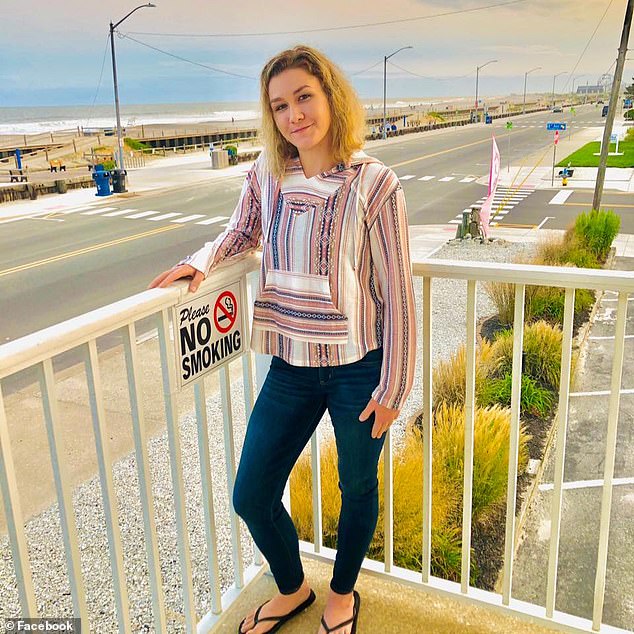 Christine Englehardt left her home in Bucks County, Pennsylvania to travel to Spring break in Miami, an annual booze-fueled street and beach party 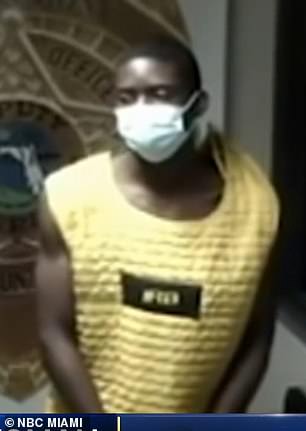 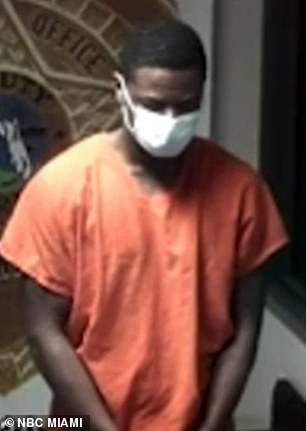 In a chilling Facebook post from 2019, Engelhardt wrote a PSA to women to trust their gut instict and to always ‘be alert’ if they felt something isn’t right after she after spotted a man behaving suspiciously at Tyler State Park in Pennsylvania.

‘I assumed he was broken down and needed help, but my gut feeling was telling me something wasn’t right. So I kept running and didn’t stop. Today around 1 pm, I ran past the same area and there was same car with the same T shirt hanging out.

‘My heart started racing. As I ran past him, he beeped again and waved for my attention. I immediately knew that this was some kind of predator scheme. I waited until I wasn’t in his sight to stop to call 911.

‘Luckily, park workers were driving by and I stopped them and told them to get the park ranger to investigate for this was now the second time the same man was doing this. They dispatched the ranger immediately and thanked me for alerting them.

‘So if you ever feel unsafe in ANY way or have a feeling something isn’t right, DON’T hesitate to notify the police. Always go with your gut. Please be on alert for any suspicious people or cars. This is a dangerous world now unfortunately and you never know what anyone’s true intentions are.’

Friends of the victim have now also taken to social media to pay tribute to Engelhardt.

‘I wish I could ask God why the good die young,’ wrote Kerr.

‘It feels like it was just yesterday that I saw you at jules and we were talking about making plans to catch up. You were such an amazing, outgoing & most beautiful women. I will cherish all our memories we shared together. Rest in paradise angel✨ Christine Englehardt. #JusticeForChristine.’

According to her Facebook page, Christine Engelhardt worked as an assistant manager at Jules Thin Crust pizza chain.

‘Thinking of you and sending prayers,’ said one commenter.

A photograph on Christine’s Facebook page which was open to the public showed her beaming with pride after finishing the Philadelphia Love Run Half Marathon in 2019.

According to a police report, Collier told officers the two men met Englehardt at a local restaurant before giving her the drug as they walked along Ocean Drive.

The group then headed back to the Albion Hotel at 1650 James Avenue, the  reported.

Surveillance footage taken from the hotel lobby shows the two men entering the hotel with Englehardt at around 1am Thursday.

As they walked into the elevator in the building, the woman was staggering and Taylor was holding her from behind ‘by the neck so she could stand’, Miami Beach Detective Luis Alsina said in a court hearing Monday.

A close friend of Englehardt’s called for Justice For Christine and praised her ‘amazing, outgoing and most beautiful’ woman 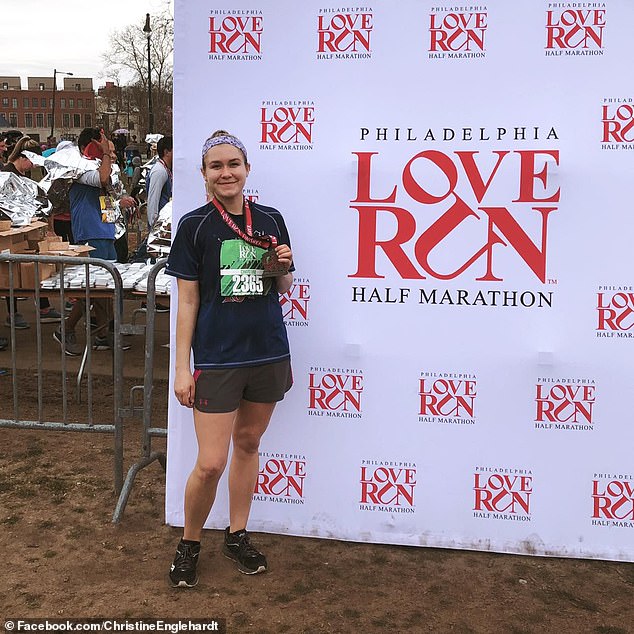 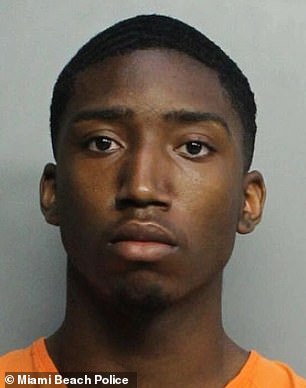 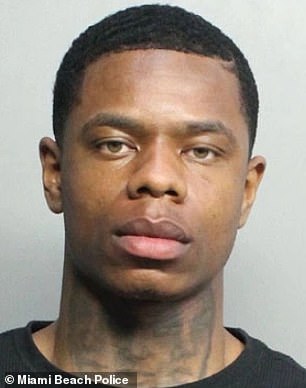 Collier said he and Taylor each had sex with Englehardt and that Taylor raped her as she seemed to be unconscious, authorities said.

Police said Englehardt was not able to have consented to sex with either of the two men while under the influence of alcohol and narcotics.

Collier claimed he thought the pill they gave Englehardt was Percocet, a powerful pain reliever, but authorities are investigating the possibility it was a narcotic such as fentanyl.

It is not clear if she took the drug willingly or if she was spiked.

Collier and Taylor then stole her phone, cash and credit cards and left her unconscious in the room ‘without any concern for her welfare or safety,’ the police report said.

The two men were then captured on the hotel surveillance cameras leaving the building around an hour after they arrived.

They then allegedly went on a spree using the victim’s cards at ‘various locations’ across Miami Beach including at liquor store South Beach Liquors.

Englehardt’s semi-nude body was found on the bed in the hotel room Thursday and emergency services were called.

A cause of death is yet to be determined with the Miami-Dade Medical Examiner’s Office carrying out further tests to learn if she died from an overdose from the pill given to her by the suspects, the Herald reported. 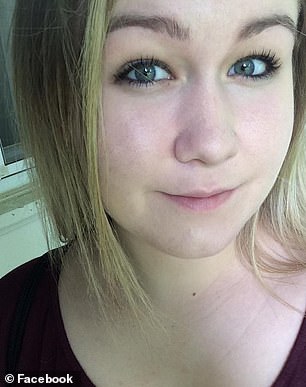 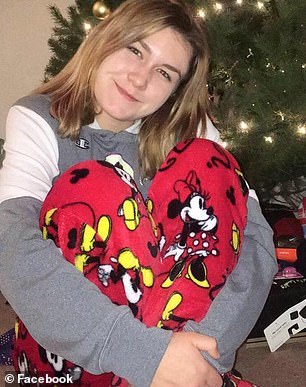 Both Collier and Taylor appeared in court in Miami on Monday.

At the hearing, broadcast on  Collier’s sister told Judge Mindy S Glazer that her brother had never been in trouble with the law before, and asked that he be released on bond.

‘I’m severely bewildered by these charges and accusations against him, but I can attest for his character and I can attest for responsibility of him standing trial for whatever charges,’ his sister said.

‘If you please let my brother come home and let our family handle the situation appropriately we will do what ever is necessary that Miami-Dade County asks of us.’

But Judge Glazer refused the request, and both men were kept in custody without bind.

‘The victim couldn’t even pick up a phone after they did whatever they did to her,’ said Judge Glazer. 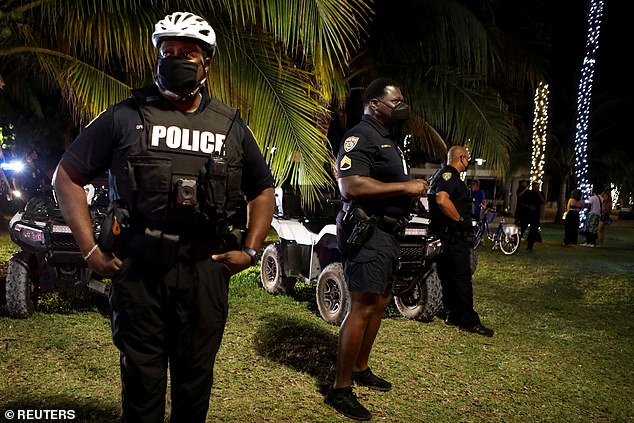 Extra police were drafted in to quell the disturbances, which saw more than 1,000 revelers arrested in Miami

Faced with a surge of violence in the city, Miami Beach Police brought in an emergency 8pm curfew on Saturday.

Five different law enforcement agencies are working to patrol the city, which has seen wild parties.

City officials say they are concerned about the potential for the large crowds to drive the spread of coronavirus, and cite lawless behavior and rampant property destruction as additional reasons to impose the curfew, which on Sunday was extended up to three weeks.

Miami Beach was calm on Monday evening after raucous weekend where officials called a state of emergency and enforced a curfew to curb the wild partying and resulting riots. 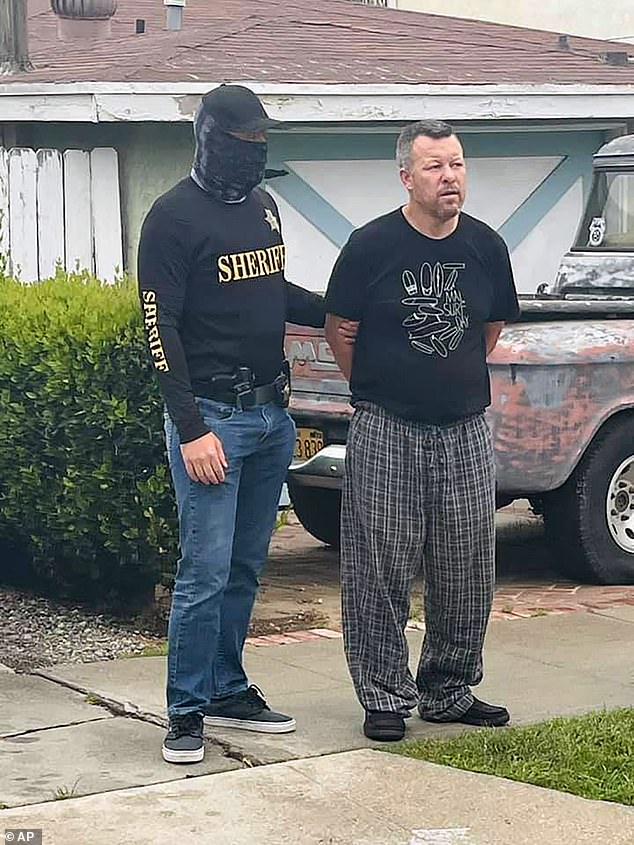 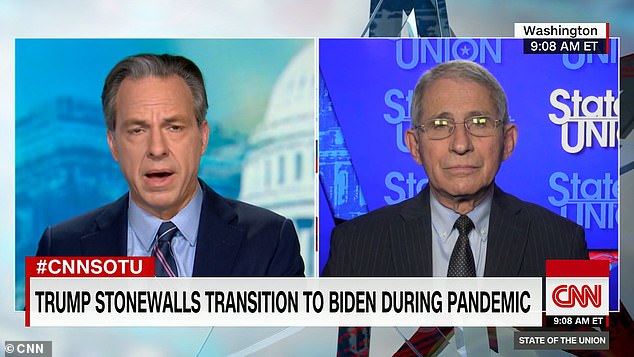 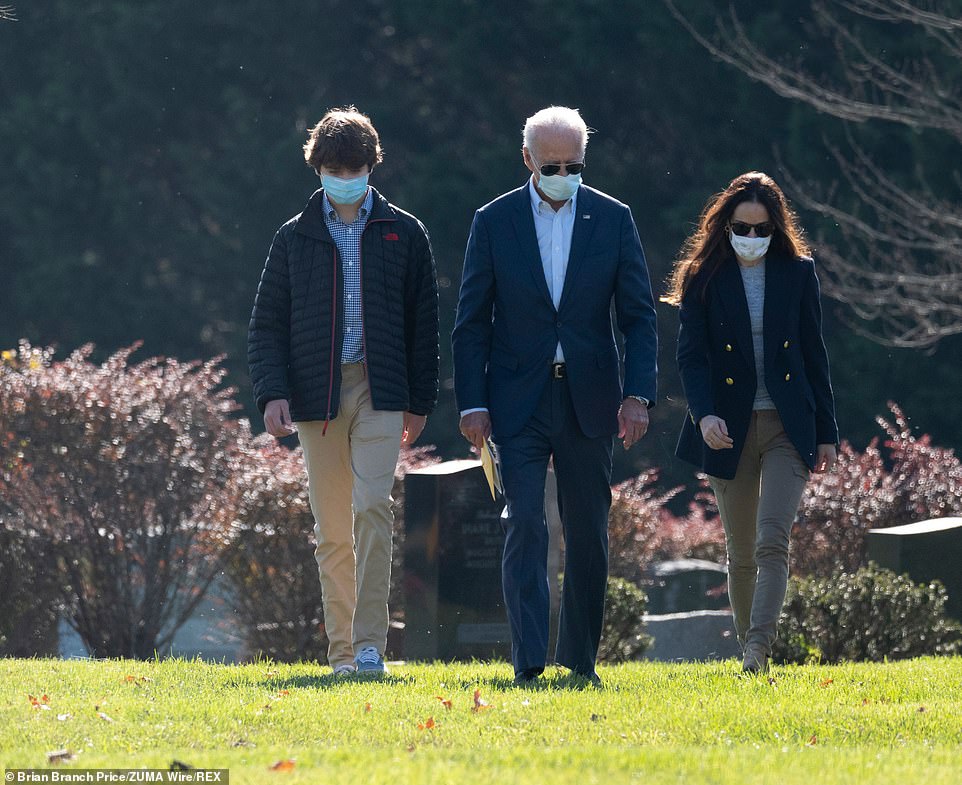 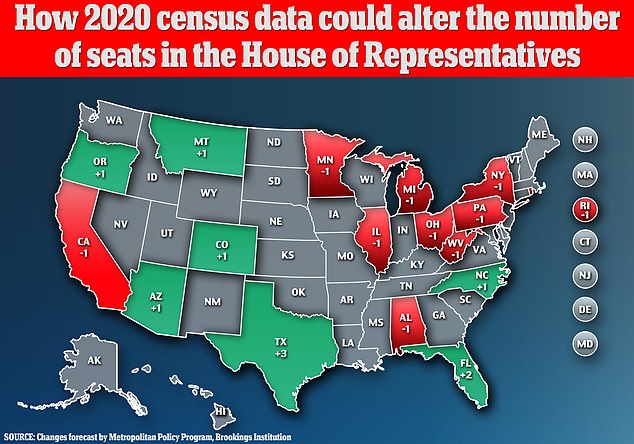 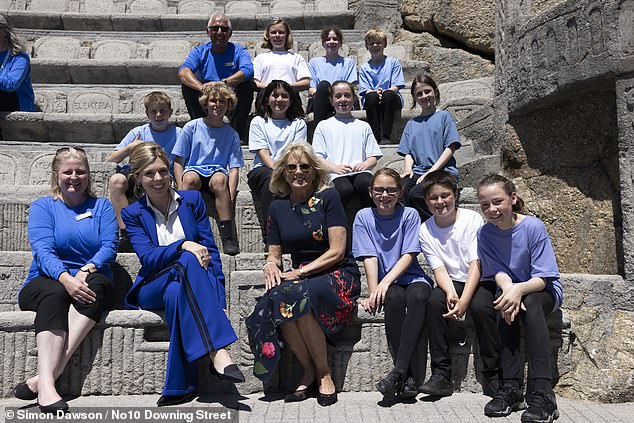 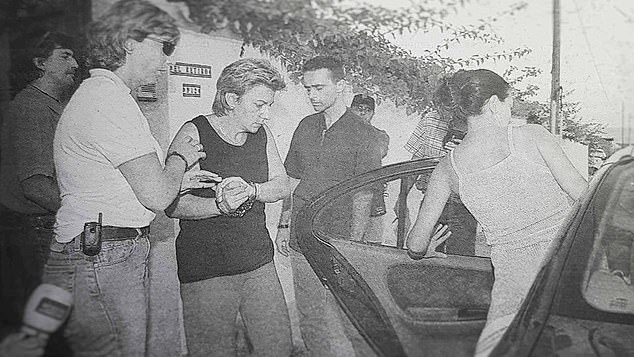