A man who stabbed his ex-girlfriend to death after stalking her as she went on a Tinder date with another man has been jailed for a minimum of 19 years.

Cruise line worker Cristina Ortiz-Lozano, 28, was murdered by Abdelaziz El Yechioui Ourzat, 31, in a ‘frenzied’ stabbing attack after he followed her home in Southampton, Hampshire, on September 21 2019.

The defendant had been in a relationship with Miss Ortiz-Lozano, who he met at school in , for 12 years which had ended a month before the attack.

Ourzat was caught on CCTV ‘hiding in the shadows’ outside a pub his ex had visited with another man a month after she broke up with him.

He then followed her home and stabbed her to death as her horrified date stood outside. 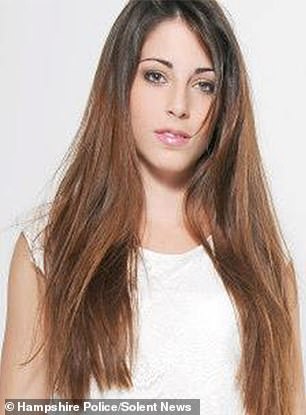 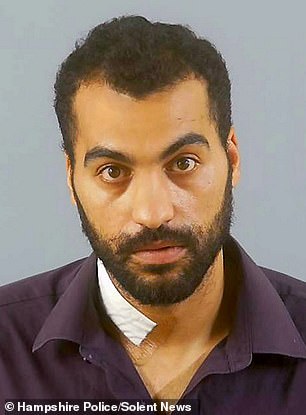 Miss Ortiz-Lozano’s father today told a court that their family is ’emotionally destroyed’ and asked his daughter’s killer ‘how could you do this to us?’

A judge branded Ourzat’s attack ‘savage, ferocious and sustained’ as she passed a life sentence with a minimum term of 19 years.

Ourzat, who is of Moroccan descent, remained emotionless as his sentence was read out today at Winchester Crown Court, Hampshire.

Judge Jane Miller QC said: ‘After she told you it was over, you clearly saw red. In the months after and on the night you killed Cristina, you adopted a ‘poor me’ attitude. 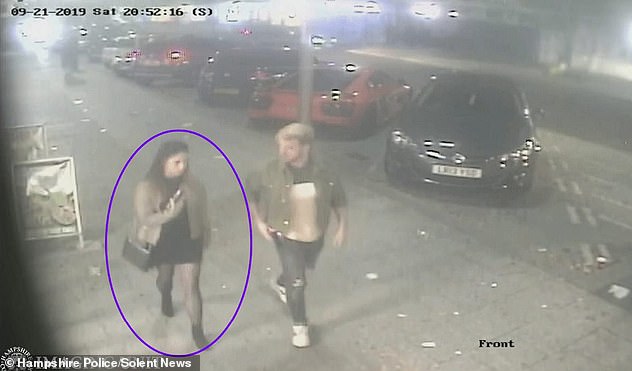 Ourzat was caught on CCTV ‘hiding in the shadows’ outside a pub where Miss Ortiz-Lozano (left) had gone with a man she had met on Tinder, Vincente Breso-Biosca, 30 (right) 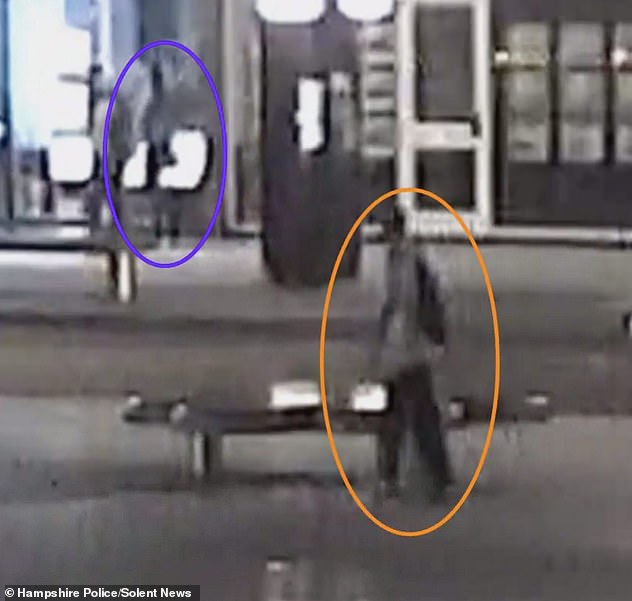 Chilling CCTV images show Ourzat stalking his former girlfriend while she was on a Tinder date shortly before he stabbed her to death. The footage was shown to a jury at Winchester Crown Court

‘You didn’t accept at any stage that the end of the relationship was your fault.

‘After the relationship ended in that month you decided to wallow in self pity.

‘You saw Cristina sitting, talking with a young man. You were jealous and were upset at her moving on and from jealousy to anger is a short step.’

The former couple moved to the UK in April 2018, living in Liverpool before moving to Southampton the following year.

Manuel Ortiz-Cortez, Cristina’s father, who lives in Spain, provided a statement about the death of his youngest daughter, which was read out to the court by prosecutor Kerry Maylin. 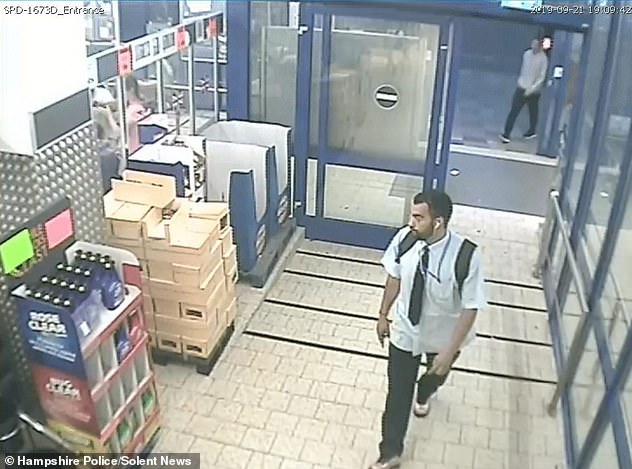 Mr Ortiz-Cortez wrote: ‘We have been destroyed as people and as a family.

‘Every day at around 9pm Cristina would call us to tell us about her day to day life. Now that has become our worst time of the day. It’s emotionally destroyed us.

‘We will probably have to move house after nearly 40 years because we live barely 200 metres from his family.

‘We included him in our family… He told me that I was like his second father.’

He then addressed Ourzat directly, asking him: ‘What reason did you have for killing my daughter? How could you do this to Cristina and the rest of our family?

‘You knew how much we loved both of our daughters. I asked you to look after her because we loved her very much.’ 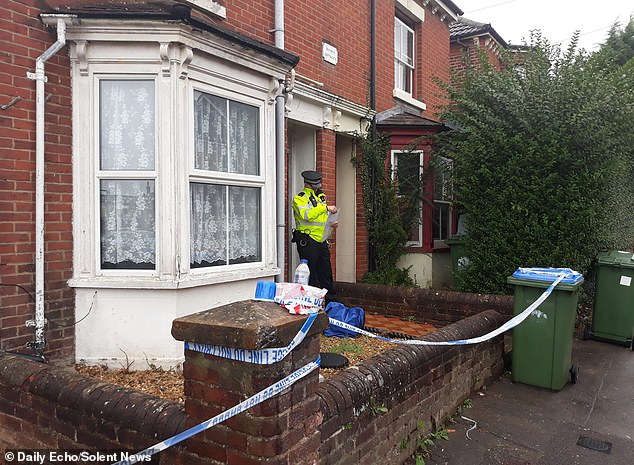 Ourzat stalked his victim all the way to her home in Southampton before stabbing her 23 times in her kitchen with a knife, the court heard

Stephen Moses, mitigating for Ourzat, read out a letter from the killer.

He said: ‘I feel ashamed as to who I have become. I don’t know how i was able to cause such damage and destruction.

‘Everything got out of hand. I never thought of hurting the person I love the most. I live in a nightmare and I hate myself.

‘I am disgusted. I will never feel peace again living with what I did. To Cristina’s family and her father Manuel, I beg for your forgiveness.

‘I do not deserve anything good from this life.’

The two week murder trial heard Miss Ortiz-Lozano was on a date with hotel receptionist Vincente Breso-Biosca, 30, in Southampton, Hampshire, on September 21, 2019.

They went to Sprinkles ice cream parlour and the Giddy Bridge pub, but left early after she spotted Ourzat entering the pub.

However, Ourzat stalked the couple home before following her inside and stabbing her 23 times with a kitchen knife while her date waited outside.

Frightened Mr Breso-Biosca told neighbours to ‘call the police and somebody help me because he’s going to kill her’.

He kicked the door down and ran inside the house to see Ourzat on top of her, already dead, as the man held a knife in his hand. 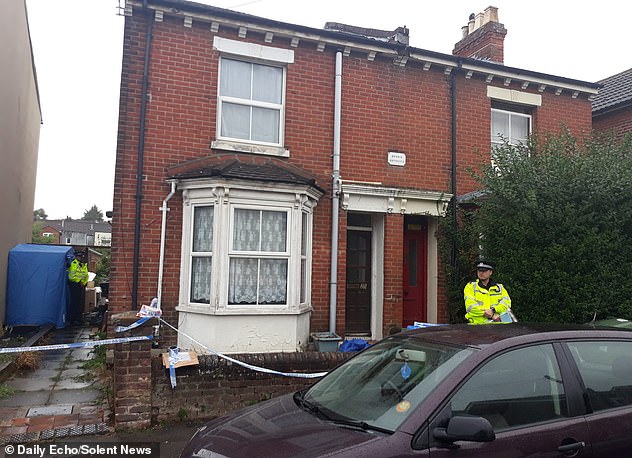 Police at the scene in Portswood, Southampton, where Cristina Ortiz-Lozano was killed

During the trial, jurors heard that the couple met at school in Spain and had been together for about 12 years before Miss Ortiz-Lozano split up with Ourzat when he was arrested for drink driving in August 2019.

At the time, they were living together in Southampton and she was working for the Norwegian Cruise Line. Mr Ourzat was a baggage handler for Port Skills at the city docks.

A Hampshire police spokesman said the pair split up after Ourzat was arrested for failing to give a breath test which led to an argument and the defendant causing criminal damage to their home address in August 2019.

Later that month, he was arrested again for sending abusive emails to Ms Ortiz-Lozano and was bailed with conditions not to contact her.

The force spokesman said that on September 21, Miss Ortiz-Lozano went on a date and decided to return home after she spotted Ourzat come into the pub.

Detective Inspector Toby Elcock said: ‘I welcome today’s sentence. El Yechioui Ourzat has been shown to be an extremely dangerous man whose abusive and jealous behaviour led him to take the life of a young woman who had her whole life ahead of her.

‘I know today’s sentence will not bring Cristina back, but I hope it goes some way to give her family and friends some closure and a degree of comfort that justice has been done.

‘This was a brutal attack on a young woman who had her whole life ahead of her.

‘The court heard how El Yechioui Ourzat’s abusive and jealous behaviour culminated in the brutal murder of Cristina.’

Miss Ortiz-Lozano suffered stab wounds to her chest, neck and abdomen and had ‘defensive’ wounds on her arms, ‘where she raised her arms in front of her body in an attempt to protect her torso and her neck’.

Ourzat, who initially told police he was stabbed first by Miss Ortiz-Lozano and was on anti-depressants, denied murdering his victim, instead claiming he was only guilty of manslaughter by diminished responsibility.

The jury took just five and a half hours to convict him of murder. 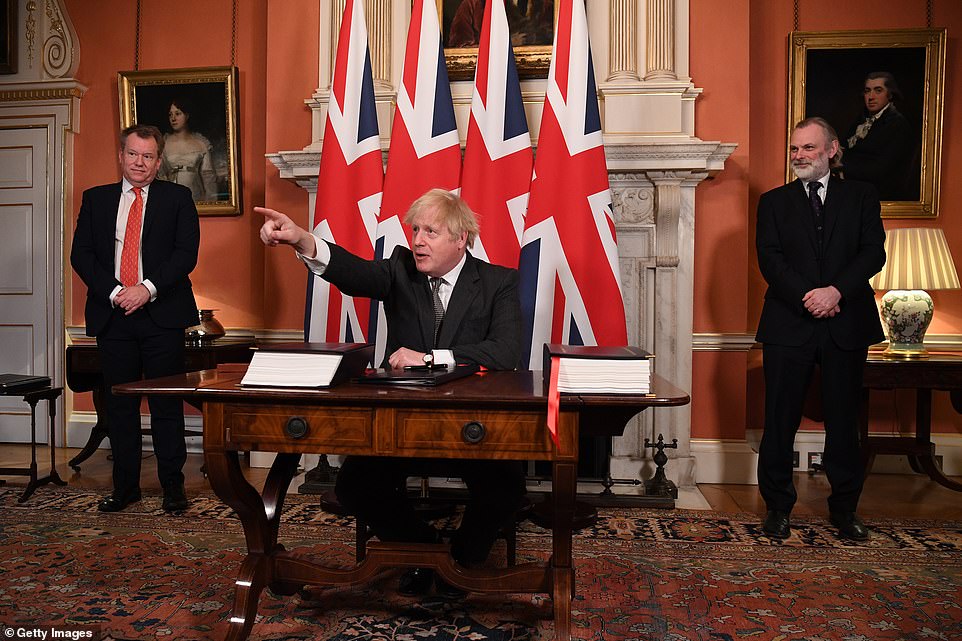 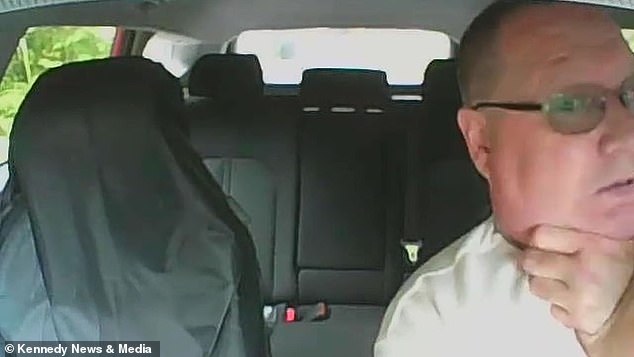 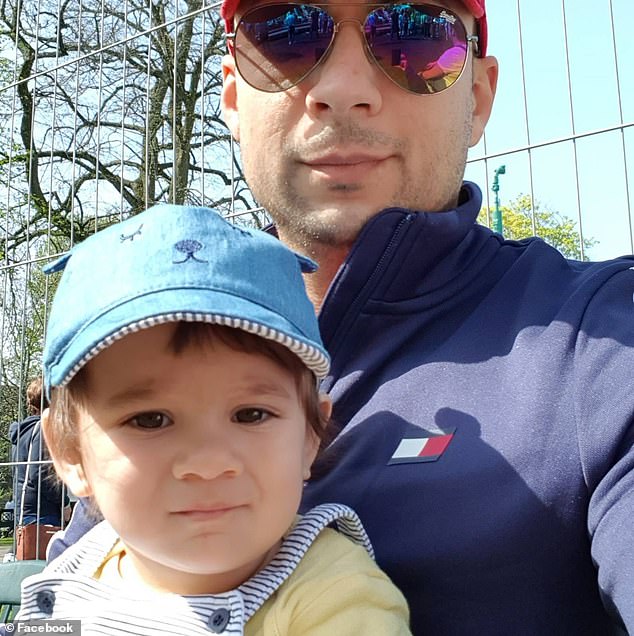 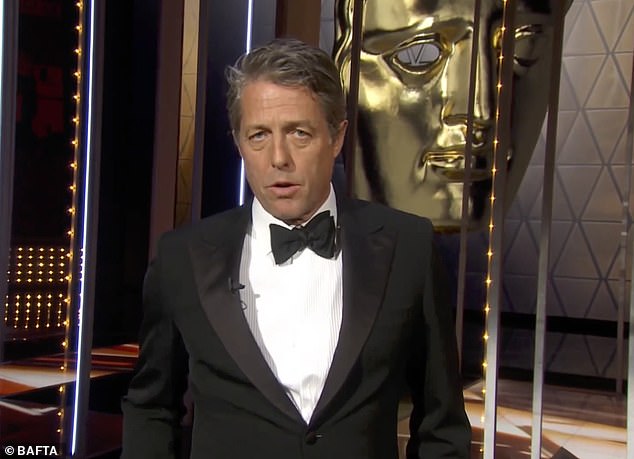 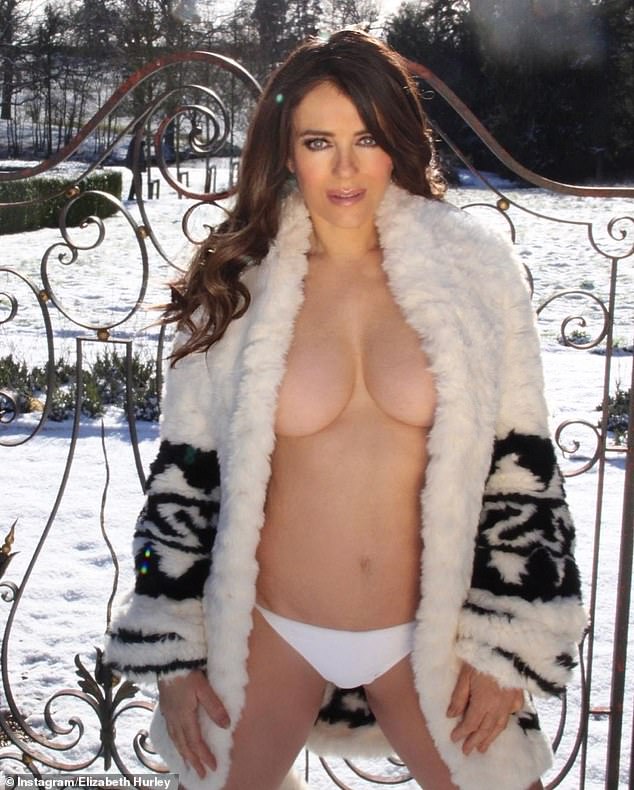 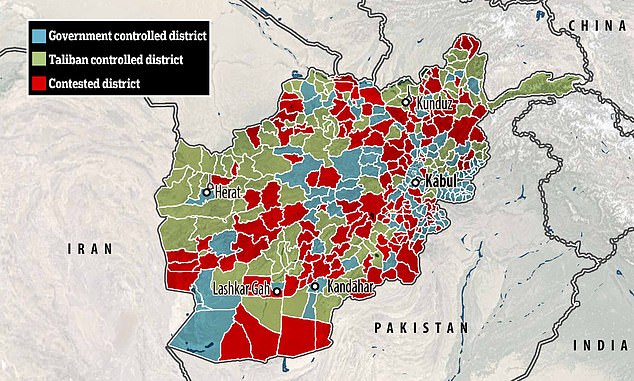 Afghan military pilots quit after being targeted in Taliban assassinations 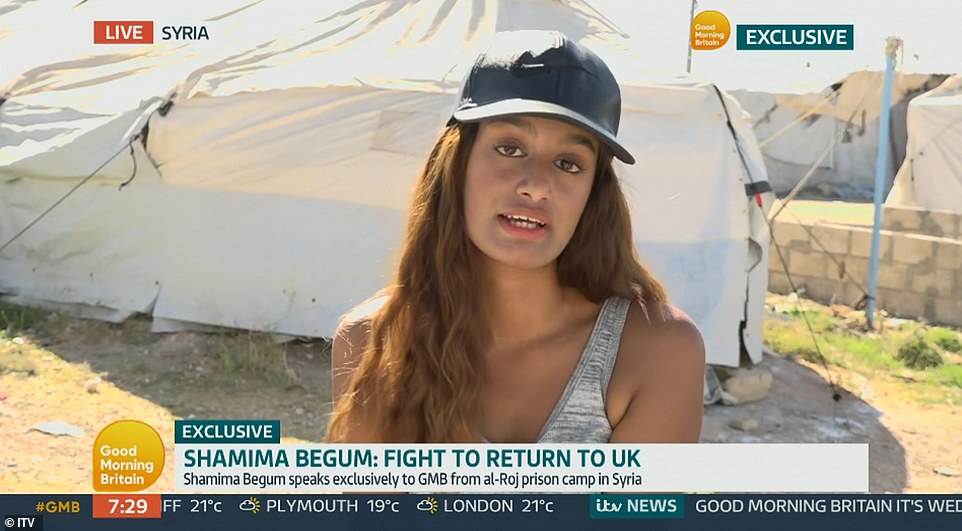