‘s former-Svengali  has set up a new technology consultancy firm three months after he sensationally quit No. 10.

Mr Cummings is the director of Siwah Ltd. which was founded on February 25, according to its Companies House listing.

It is not clear exactly what the firm will do, but its ‘nature of business’ is listed as ‘information technology consultancy activities’.

During his time as Mr Johnson’s most-senior official, Mr Cummings issued a clarion call for ‘weirdos’ and ‘misfits’ to work in No. 10.

He wrote an extraordinary blog post calling for ‘some true wild cards, artists, people who never went to university and fought their way out of an appalling hell hole’. 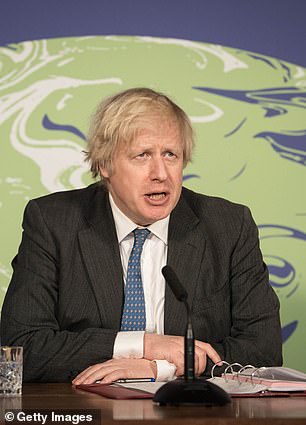 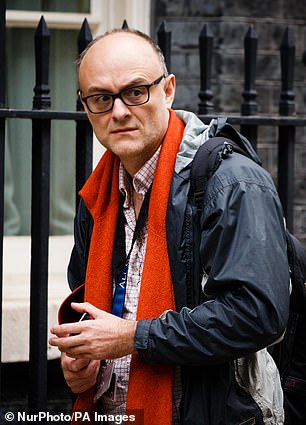 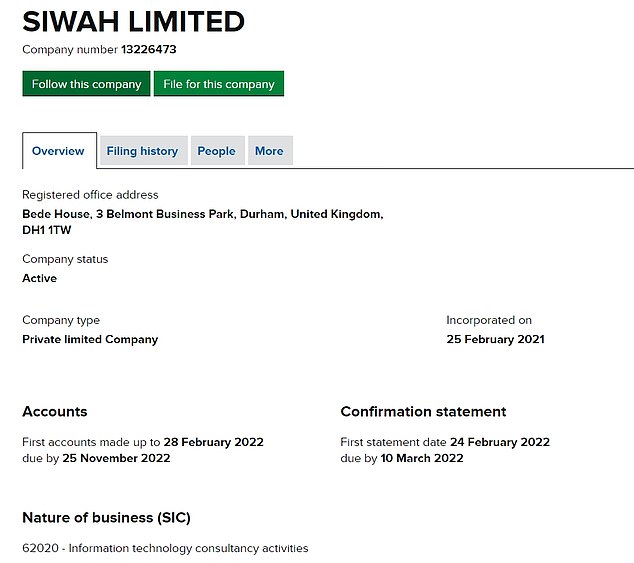 Siwah Ltd. was founded on February 25 by Mr Cummings who is listed as a director, its listing on Companies House (pictured) reveals

New consultancy firm Siwah Ltd. does not yet have a website or public profile, prompting many to speculate about what Mr Cummings has in store.

Some said the firm could be named after Oasis Wāḥat Sīwah in Egypt.

It is said to be where Alexander the Great was made the Pharaoh of Egypt in 332 BC.

Mr Cummings casually strolled out of Downing Street while clutching a cardboard box in November following a brutal reckoning which saw his closest ally Cain fall on his sword – having failed to secure the key role of Mr Johnson’s chief of staff.

It followed reports that Miss Symonds blocked Cain’s promotion, warning it would be a ‘mistake’.

The unrest in No. 10 saw her purportedly nicknamed ‘Princess Nut Nut’ by opponents.

Other tags for Ms Symonds previously circulating among the Brexit clique include ‘Cersei’, a reference to the scheming Game of Thrones character. 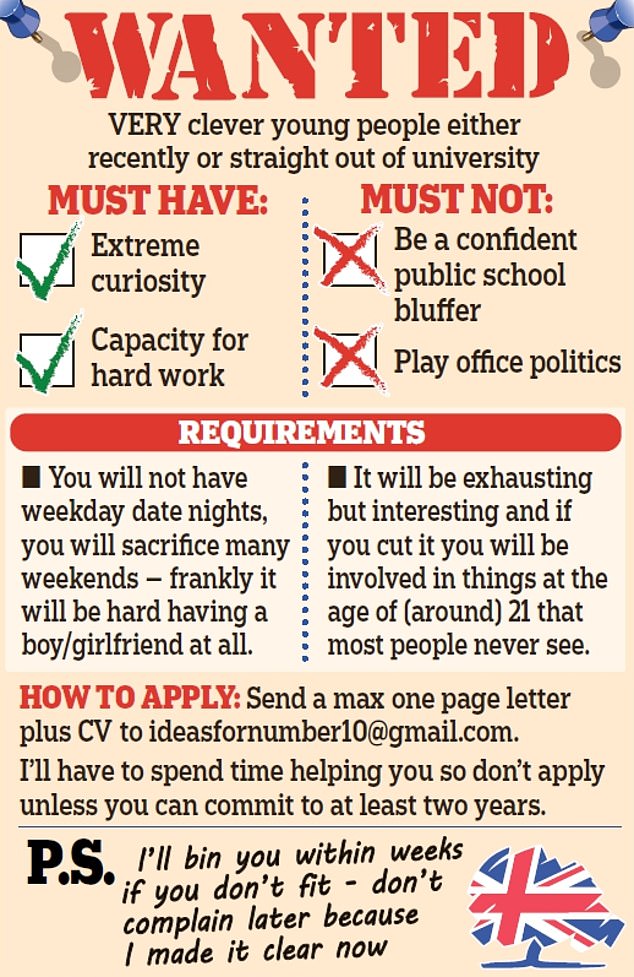 During his time as Mr Johnson’s most-senior official, Mr Cummings issued a clarion call for ‘weirdos’ and ‘misfits’ to work in No. 10. Pictured: The Daily Mail illustrated how Mr Cummings’ job advert might look on a poster 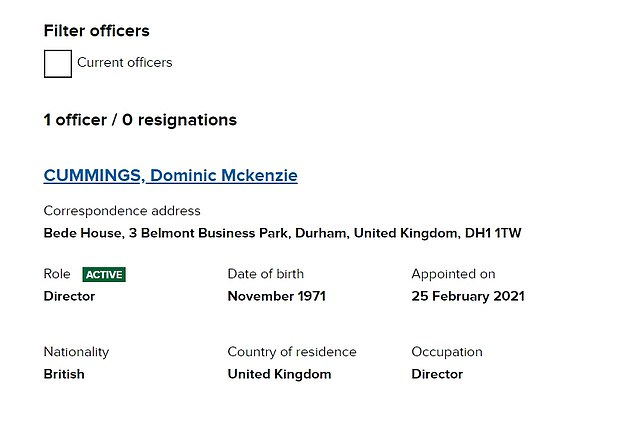 New consultancy firm Siwah Ltd. does not yet have a website or public profile, prompting many to speculate about what Mr Cummings has in store 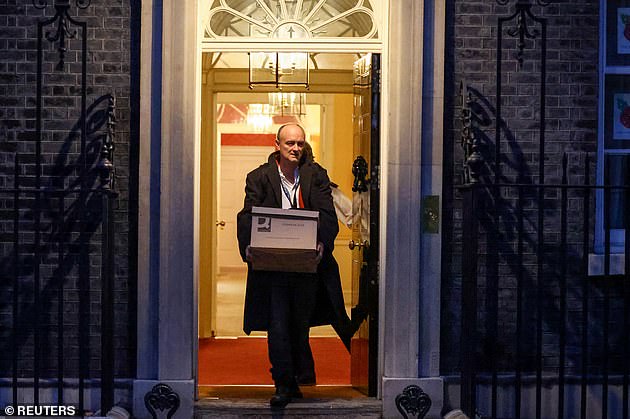 Mr Cummings’ departure lead to much speculation about where he would go next – with some sources claiming he could soon be offered the job to lead Britain’s first £800million defence research agency.

The proposed body, based on the American Defence Advanced Research Projects Agency (DARPA), is described as one of his ‘pet projects’.

One source told the FT: ‘One expectation among Whitehall mandarins is that Mr Cummings may leave Number 10 to become the first head of his pet project: a new high-risk, high-reward scientific research body based on the Darpa agency in the US’.

Less than two years ago Mr Cummings was relatively unknown outside Westminster but was thrust into the public consciousness with his combative nature, his desire to take on the Establishment and his ill-fated decision to bend the rules in the first lockdown to travel north from London with his ill family.

Mr Cummings’ 16 months in Downing Street will also give him the chance to earn millions of pounds as a consultant advising businesses on Brexit, the coronavirus crisis and gaining access to Whitehall. 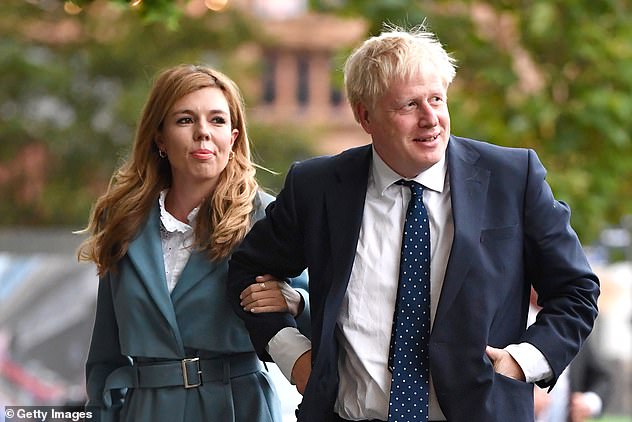 Another insider told MailOnline: ‘Dom has been driving reform of the civil service –  he could make a fortune as a consultant’.

The 48-year-old father-of-one – who is married to Spectator journalist Mary Wakefield, the daughter of baronet Sir Humphry Wakefield – could also choose to write a book about his time in Government, which could secure him a publishing deal of between £500,000 and £1million.

Last week it was revealed that Boris Johnson’s dog Dilyn has become the unwitting victim of an increasingly bitter feud between Mr  and Miss .

Mr Cummings has been accused of being behind allegations that the dog cocked its leg over a No 10 aide’s handbag, and chewed on antique furniture and books at the Prime Minister’s countryside retreat – inspiring Mr Johnson to call for someone to ‘please shoot that f****** dog’.

It was claimed that Mr Cummings harbours a grudge against Dilyn because the dog once ‘humped his leg’ during a No 10 away day at Chequers. 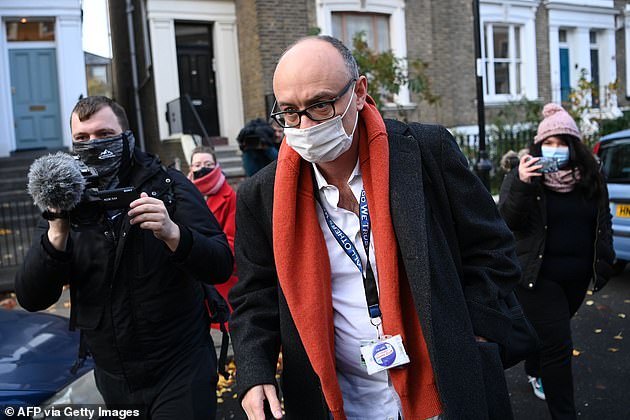 He is now, it was asserted, using Dilyn to fight a proxy war against the PM’s fiancee.

Ms Symonds played a pivotal role in November’s ousting of Mr Cummings and Lee Cain, the director of communications and a fellow member of the Vote Leave faction.

On Friday, one of the last remaining members of this group was forced out of Downing Street.

Oliver Lewis, nicknamed Sonic because of his supposed resemblance to the computer game character Sonic the Hedgehog, quit after the Prime Minister accused him of briefing against Michael Gove, reportedly based on information provided to him by Ms Symonds.

Mr Lewis – who played a key role in the successful EU trade talks with Lord Frost, the former chief Brexit negotiator – had been appointed head of the new No 10 ‘union unit’ to counter demands for Scottish independence just two weeks ago.

Other senior advisers are also understood to be on the brink of resigning.

Stuck in the middle of all the drama is Dilyn.

As the feuding has intensified, increasingly negative stories have appeared about the dog’s behaviour. Reports yesterday suggested Mr Johnson had been left with a four-figure repair bill for the damage at Chequers. 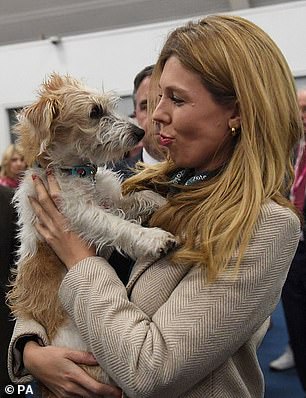 An insider said: ‘I was at a meeting where Dilyn darted under the PM’s feet with an old book in its mouth. The PM shouted, ‘For God’s sake, I’m going to get another £1,000 repair bill! Someone please shoot that f****** dog!’ Luckily, Carrie wasn’t around to hear him.’

They added: ‘I don’t think he meant it literally.’

It followed another story about ‘Dilyn’s Watergate’, which saw him cock a leg over the handbag of aide Katy Lam – who then left No 10.

It was reported that Ms Symonds was ‘very angry’ with the reaction from Miss Lam.

A Downing Street spokesman said that there was no suggestion that her departure was linked to the incident.

One Tory source pointed the finger at Mr Cummings, and traced the animosity back to an away day at the Prime Minister’s Buckinghamshire home.

One said: ‘Cummings was chatting away to his friends when Dilyn ran up to him and mounted him, leaving him absolutely furious. He was raging as he tried to get the dog off of him.

‘Everyone was laughing – and Dom doesn’t like being laughed at. After that he would bitch about poor Dilyn to anyone who’d listen.’ 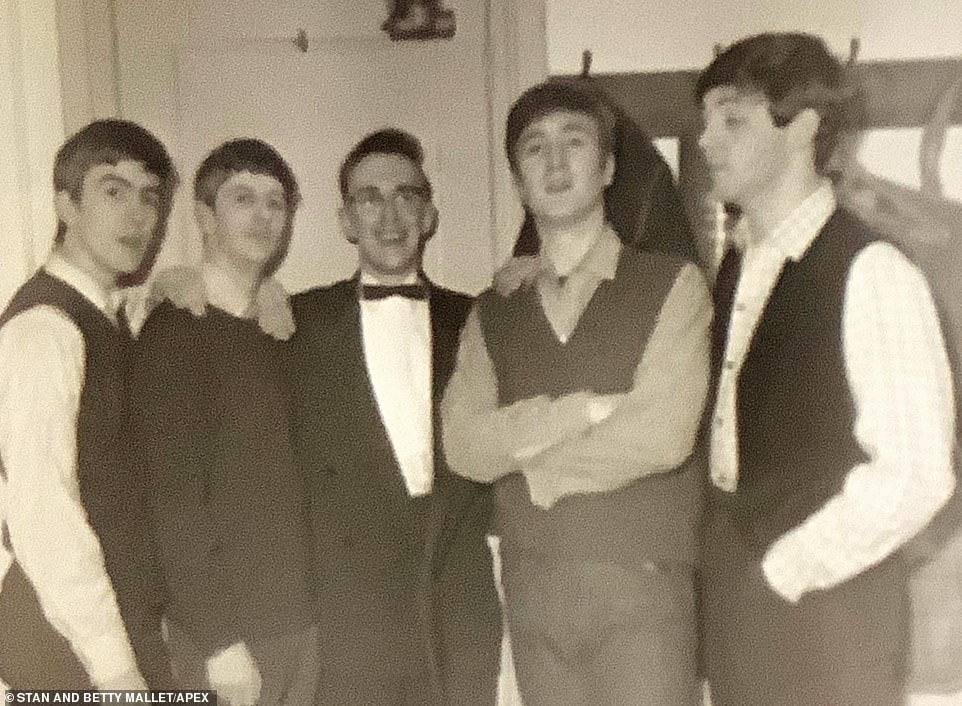 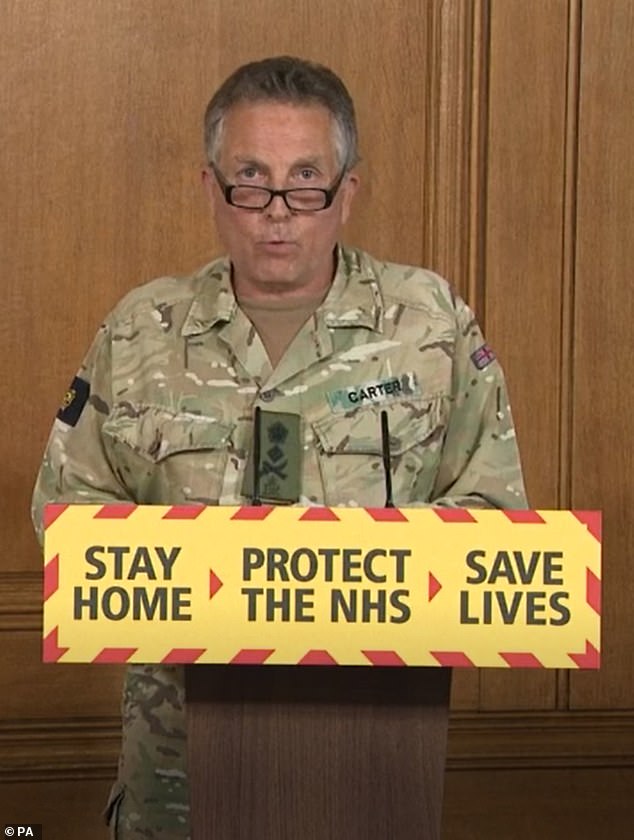 Covid could drag world back to the 1930s, Britain’s military chief warns 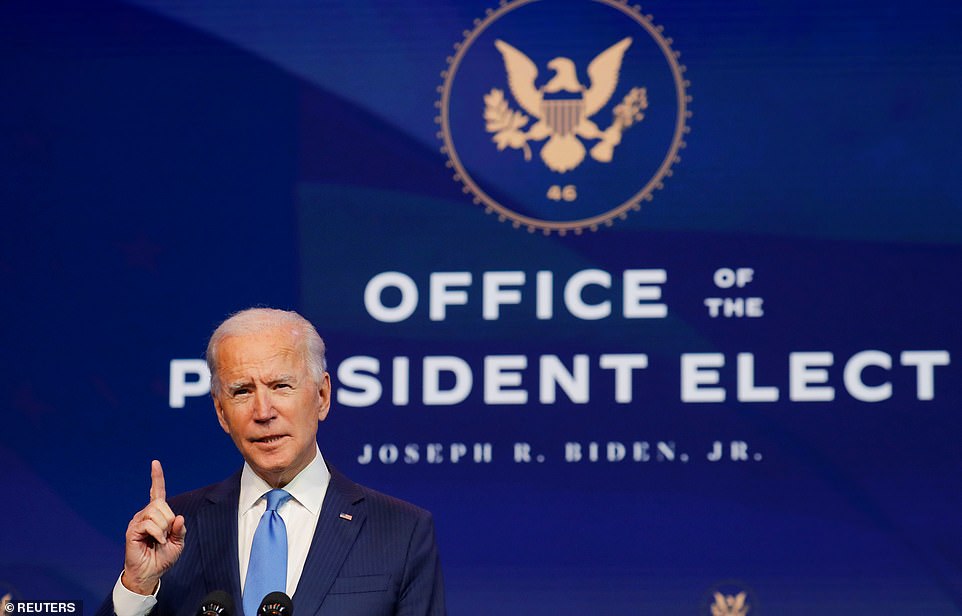 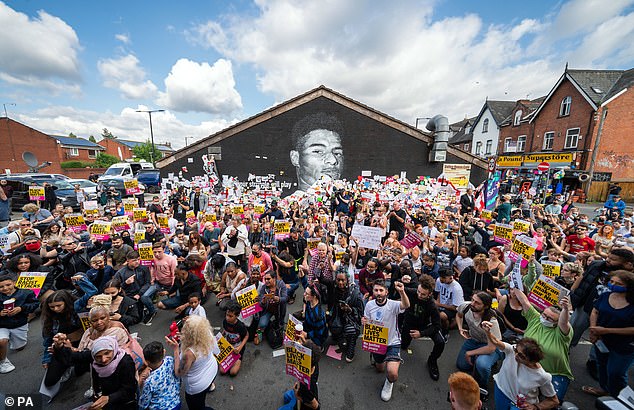 STEPHEN GLOVER: Response to those vile attacks on footballers that proves UK is NOT a racist cesspit 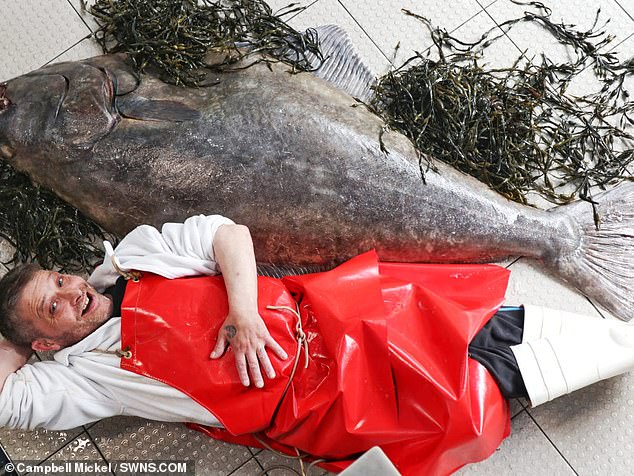 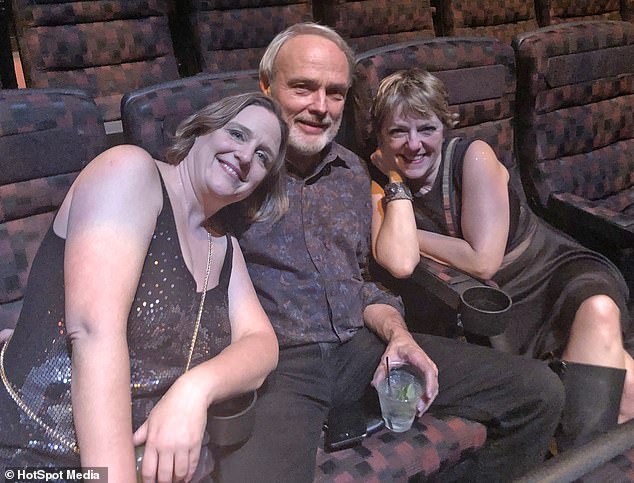 Jane Seymour, 70, shows off her gorgeous body in a blue swimsuit as she frolics on vacation 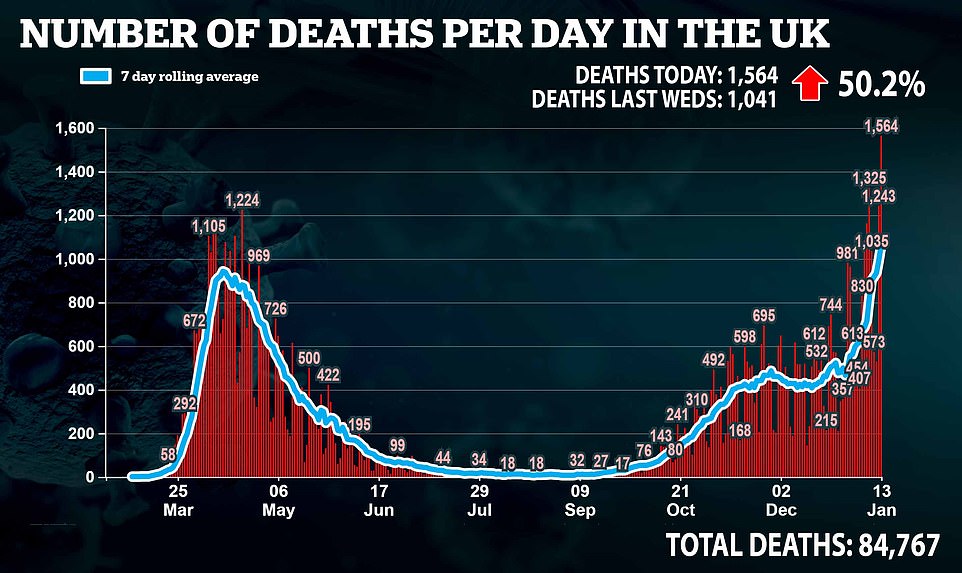