Seven Albanians stowaways have been arrested after they were found on a cargo ship bound for Dorset.

Paramedics received a call from the Chise Bulker at around 5.40am on Tuesday after a person on board was reportedly in need of medical attention.

It was soon discovered that seven ‘unidentified individuals’ had been found stowing on board the vessel, though nobody needed any help from paramedics.

The 584ft vessel, a bulk carrier built in 2014 and flagged in Panama, was brought to port today at 1pm – more than 24 hours after initially calling for assistance.

Police say there is nothing to indicate that those found on board attempted to take control of the ship at any stage – despite claims the ship’s captain was heard ‘crying’ for assistance over the radio yesterday morning.

The ship loaded a week ago in Rouen, France, after having previously Algeria, Tunisia, the US and Mexico. It is not known where the migrants are currently being held. 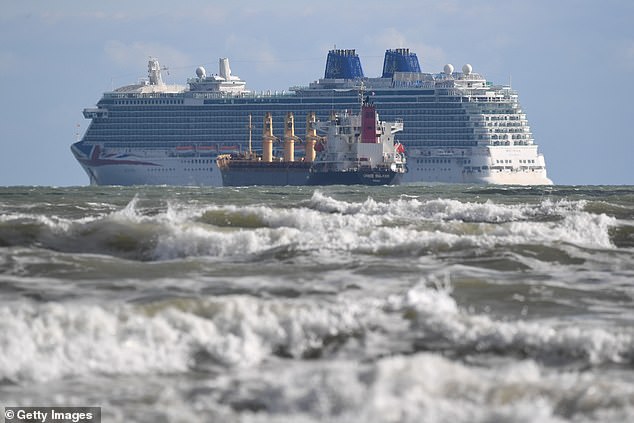 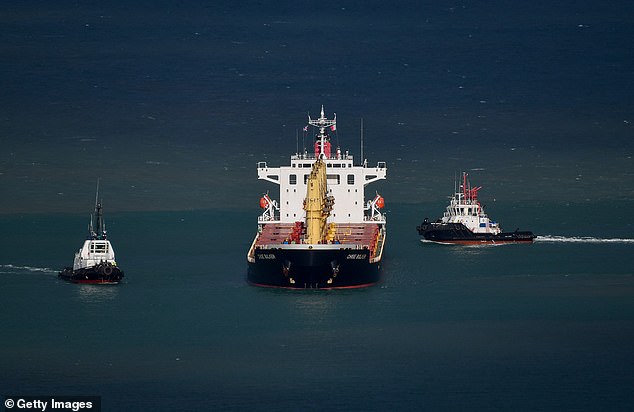 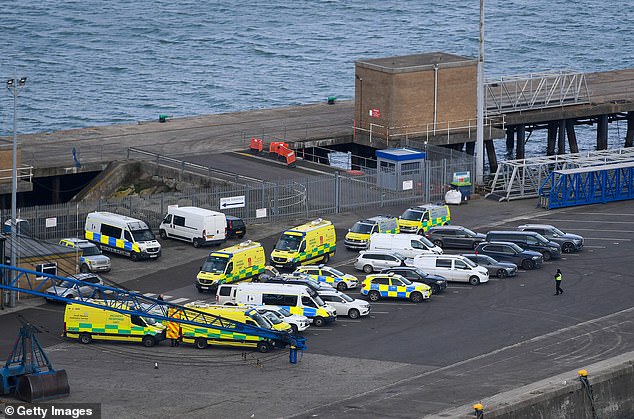 Paramedics were initially called after a person was reportedly in need of medical attention at around 5.40am on Tuesday

The Chise Bulker was due to arrive at Portland at around 4am yesterday after loading at the Port of Rouen on February 3.

According to , the ship’s captain was heard ‘crying,’ over the radio calling for immediate assistance as it sailed for Le Havre, before turning back for Portland.

A source told the publication the captain was audibly distressed and claimed the stowaways were trying to force themselves on the bridge.

They also claimed the crew were being harmed – though police later stated nobody needed medical attention.

It anchored off Weymouth Bay yesterday, before Border Force vessels were seen escorting the ship to port this afternoon.

A spokesman from Dorset Police said today: ‘We received a call at around 5.40am on Tuesday from the ambulance service in relation to a person reportedly in need of medical attention on board a commercial vessel, called Chise Bulker, off the coast of Portland. 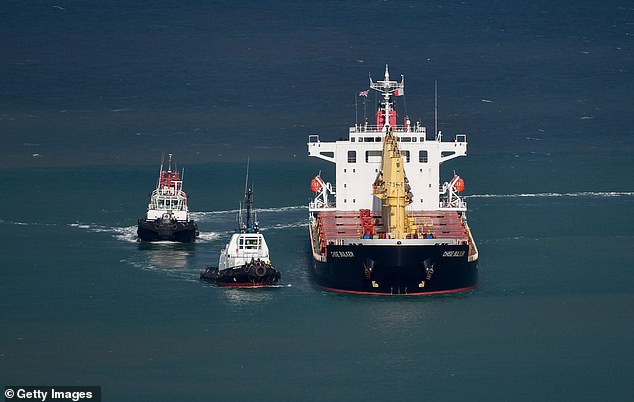 The Chise Bulker, which can carry up to 33,355 tonnes, is thought to have last loaded at the Port of Rouen, before sailing for Portland 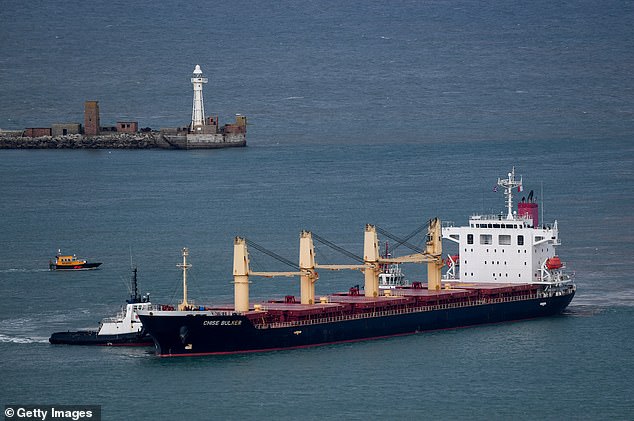 Reports claim the ship’s captain was heard ‘crying’ over the radio as he called for help on Tuesday morning. Border Force brought the vessel to shore this afternoon 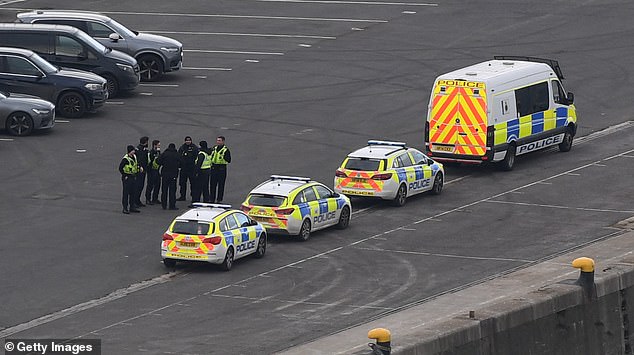 Police took seven people into custody this afternoon, each of whom is being considered for offences by immigration officials 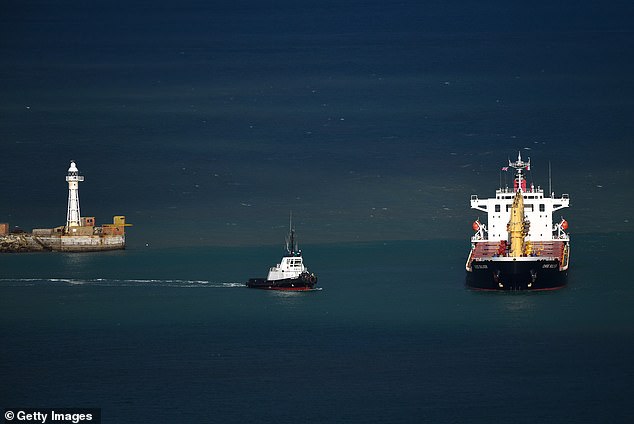 Police said nobody on board the vessel required medical assistance, after a paramedics received a call out on Tuesday morning 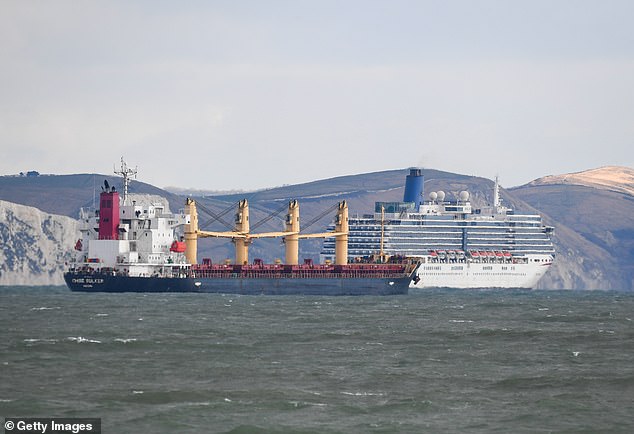 Dorset Police said it was investigating whether any criminal offences took place on board the Chise Bulker, but said there was no evidence of a potential takeover

‘Following enquiries, it was established there were reportedly a small number of unidentified individuals that had been located on board the vessel and none of them required any medical assistance.

‘Officers liaised with the Border Force, the vessel’s crew and other partner agencies and arrangements were made for the vessel to safely dock at Portland Port.

‘A total of seven individuals – believed to be Albanian nationals – were arrested by police and escorted from the ship. They will be considered by the Border Force and UK Visas and Immigration for potential offences.

‘The ship’s crew are being spoken to by officers and enquiries are ongoing to establish whether there are any reports of criminal offences. There were no reports of any injuries to the crew or the detainees involved in this incident.

‘We would like to thank all those involved in the multi-agency operation to ensure this vessel could safely be brought into port and those on board taken safely to shore.’

In October last year, SBS forces stormed the Nave Andromeda oil tanker off the coast of Southampton after reports Nigerian stowaways had taken control of the vessel.

However, prosecutors later released the seven men involved in the incident after concluding there was ‘no realistic prospect’ of securing a conviction. 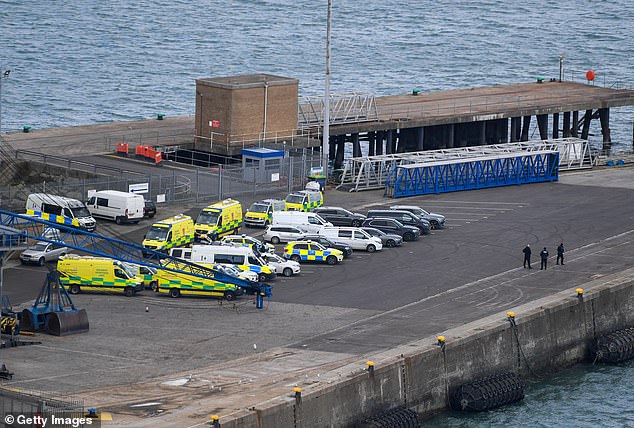 Border Force officials joined paramedics, police and the coastguard at Portland in Dorset 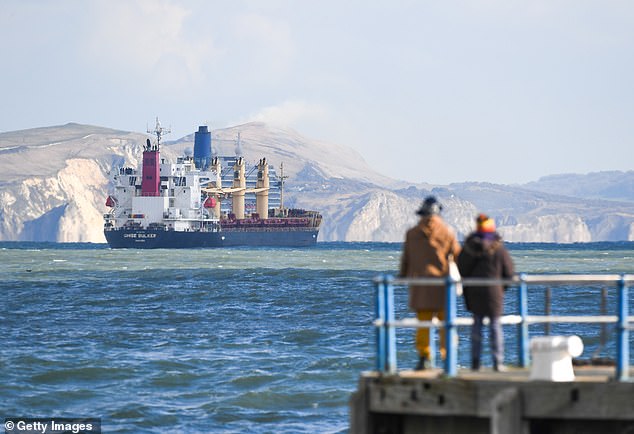 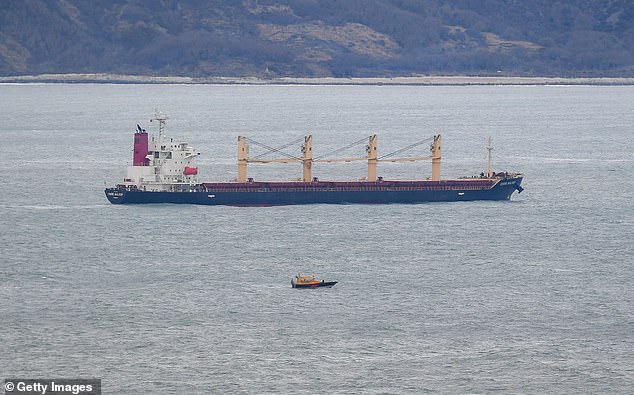 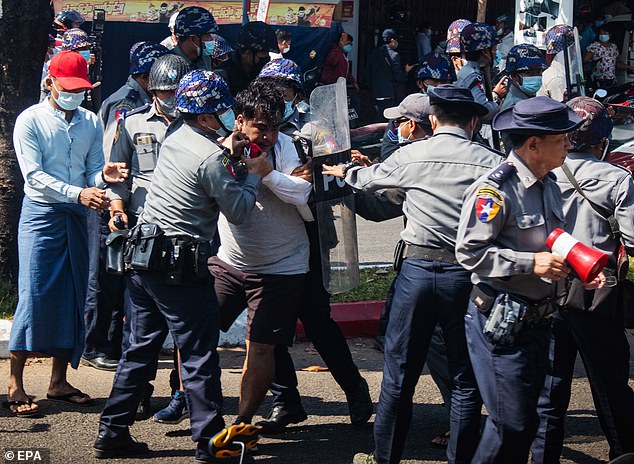 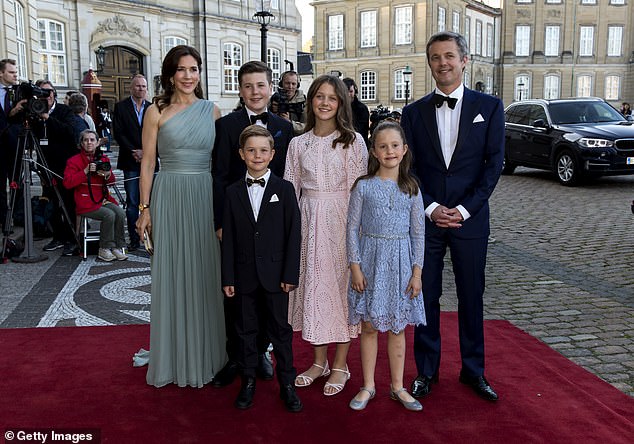 Australian-born Crown Princess Mary will be cheering at Wembley tomorrow 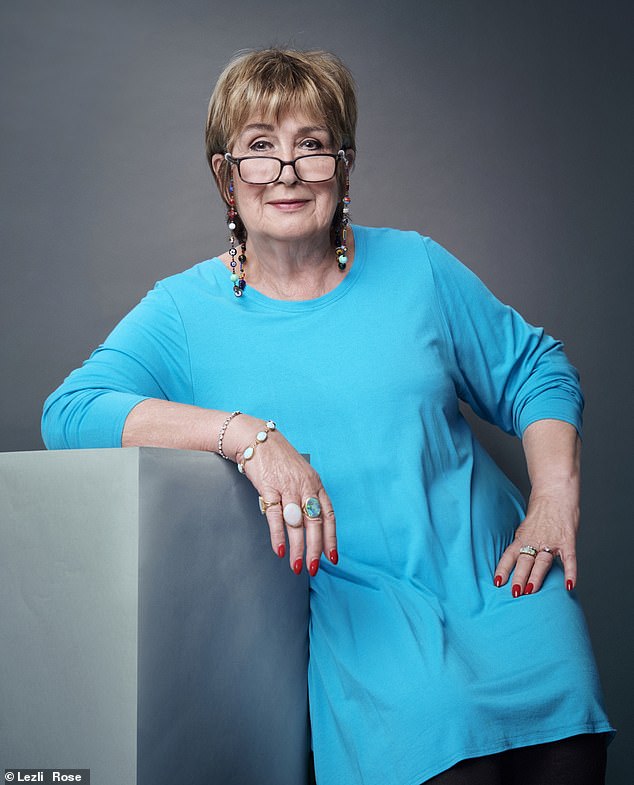 JENNI MURRAY: Why do men still find it hard when their wives earn more? 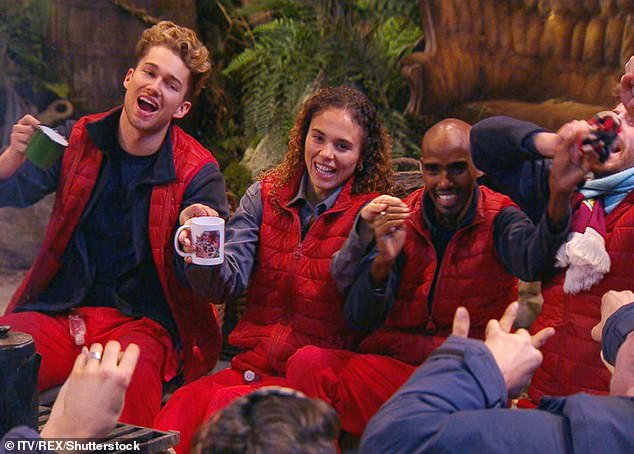 ‘Too nice’ I’m A Celebrity loses 6.2 million viewers since the new series began a fortnight ago 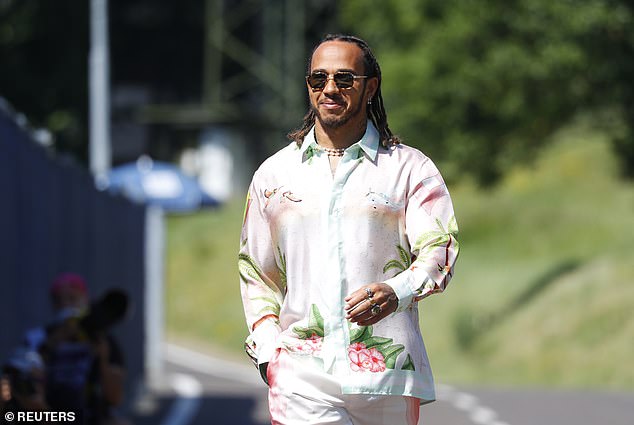 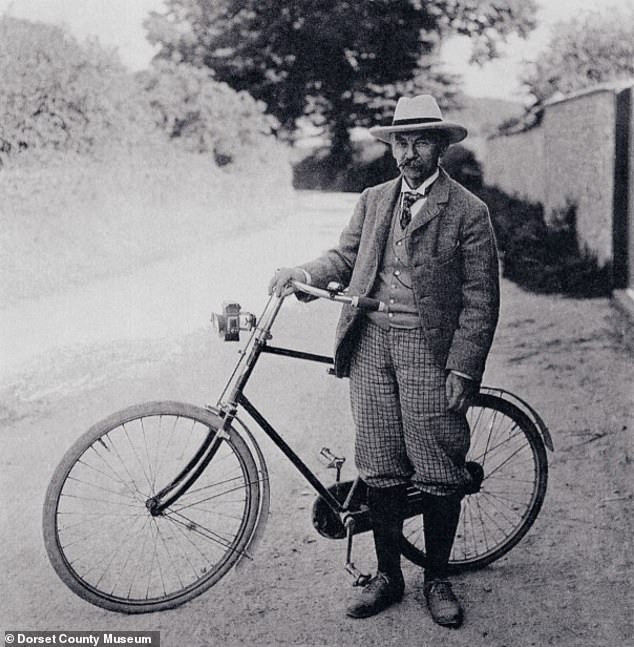 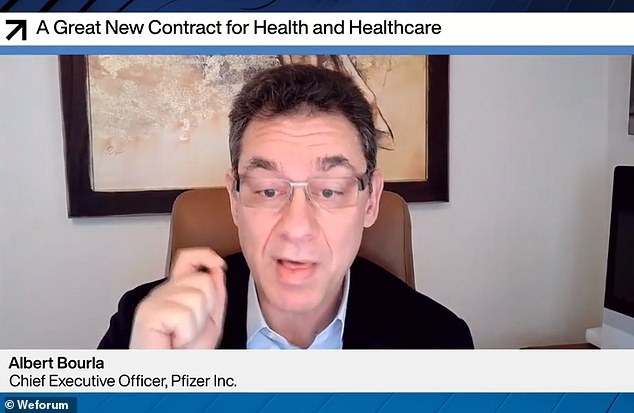