The SoulCycle instructor forced to apologize after getting the vaccine as a ‘teacher’ is a ‘narcissist with a huge God complex’, one former staffer has claimed.

Stacey Griffith, 52, had posted photo of her being vaccinated in Staten Island to Instagram last Friday. That sparked a backlash from fellow New Yorkers, who branded the move ‘sickening’.

Now her ex-colleague has told the move is ‘completely in line with Stacey’s character’. They added: ‘She operates entirely from a narcissistic standpoint. She has a huge God complex.’

A SoulCycle spokesman said: ‘Stacey Griffith operated in a personal capacity in applying for a NY State COVID-19 vaccine. SoulCycle plays no role in organizing or obtaining vaccinations for instructors or other employees nor do we encourage any of our SoulCycle employees to seek vaccine priority as educators.’

Griffith, who has trained Kelly Ripa, Demi Lovato and Brooke Shields and worked with , had said she took no shortcuts to secure the appointment and was eligible as a ‘teacher.’

But she was forced to apologize after coming under intense criticism for the move. She also deleted the post.

‘I want to apologize from the bottom of my heart for my recent action in receiving the vaccine,’ Griffith wrote on Instagram. ‘I made a terrible error in judgment and for that I am truly sorry.’ 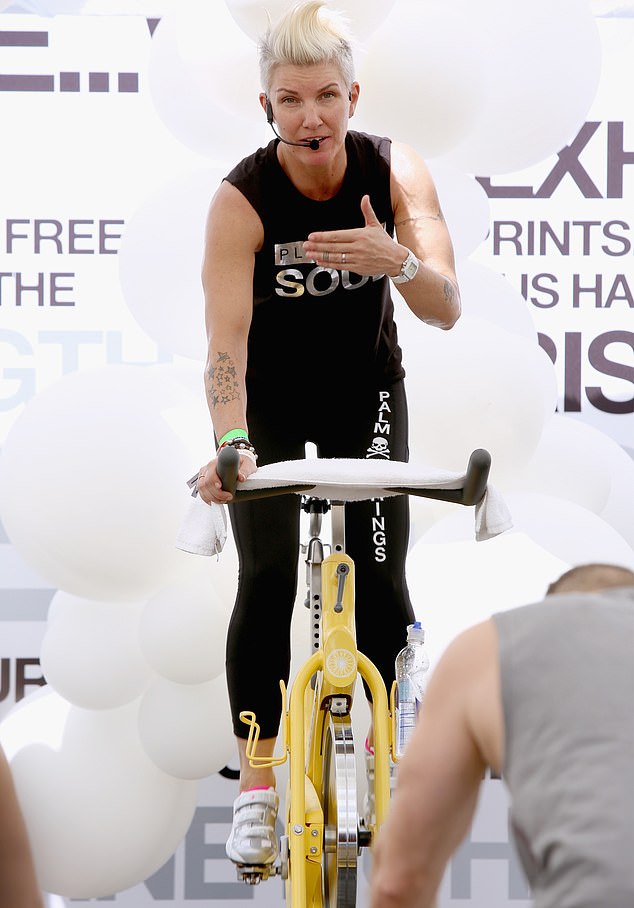 Stacey Griffith, 52, had posted photo of her being vaccinated in Staten Island to Instagram last Friday. That sparked a backlash from fellow New Yorkers, who branded the move ‘sickening’ 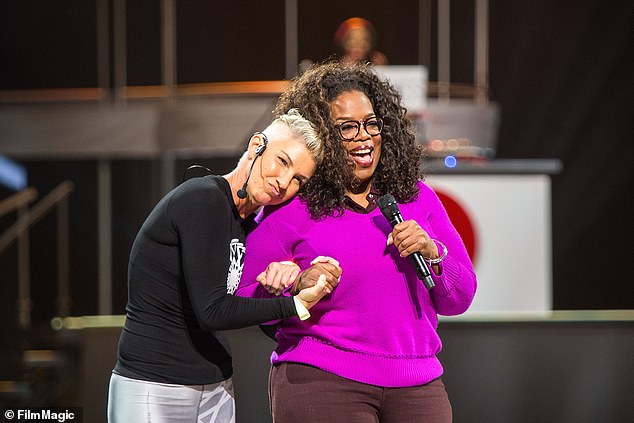 Now one former staffer has claimed Stacey Griffith, left, who has worked with Oprah Winfrey, right, is a ‘narcissist with a huge God complex’

Griffith, who has trained Kelly Ripa, Demi Lovato and Brooke Shields, had said she took no shortcuts to secure the appointment and was eligible as a ‘teacher’

In November last year Griffith was one of those who faced accusations of demanding behavior from former colleagues at SoulCycle.

A bombshell investigative report from detailed a trove of accusations from current and former riders, studio workers and corporate employees against the fitness brand’s top instructors.

Lauren Zuckerman, who worked on the front desk and as a key holder at the Tribeca studio, said Griffith made her cry because she was so ‘stressed out’. She said Griffith responded by saying: ‘OK, she’s not allowed to work here anymore when I’m teaching.’

Zuckerman also told Insider Griffith would throw her microphone at employees if it wasn’t working, would get front-desk staff to do her groceries and dry cleaning, and would ‘yell at us’ if there was an empty seat in one of her classes.

She claimed staff would have to jump on a bike to fill an empty seat up to three times a day to prevent being shouted at. 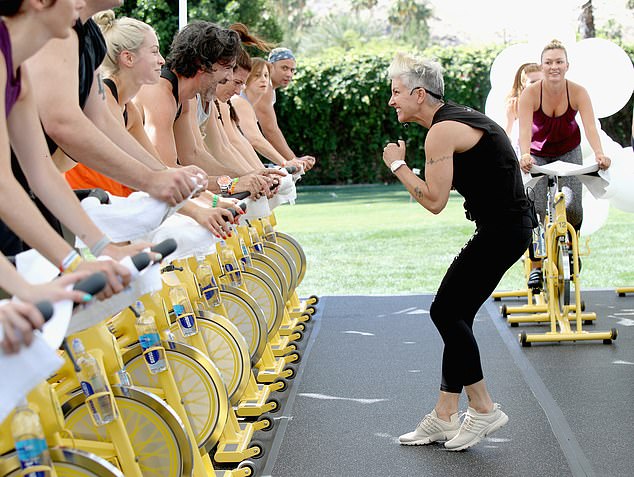 Griffith, who has trained Kelly Ripa, Demi Lovato and Brooke Shields said she took no shortcuts to secure the appointment and was eligible as a ‘teacher’

The former instructor, who taught in New York for six years, also told Insider Griffith was known for her ‘Hollywood’ demands.

When she raised concerns about Griffith and Cole’s behavior, Zuckerman said she was told it was part of the job, Insider reported.

SoulCycle said at the time: ‘At SoulCycle, our priority has always been to build a community centered on our core values of diversity, inclusion, acceptance and love.

‘When we receive complaints or allegations related to behavior within our community that does not align with our values, we take those very seriously and both investigate and address them. We are committed to continuing to make improvements and ensuring that we live up to the values that our teams and riders expect of us.’

Griffith’s apology post regarding her vaccine went up early on Monday afternoon, but it appears comments are disabled on that post, as well as Griffith’s other recent posts to her 64,000 followers.

She had written on her now deleted post: ‘VACCINE DAY! Step one of the Moderna magic!! One hour drive to STATEN ISLAND worth every minute! It takes a village.’ 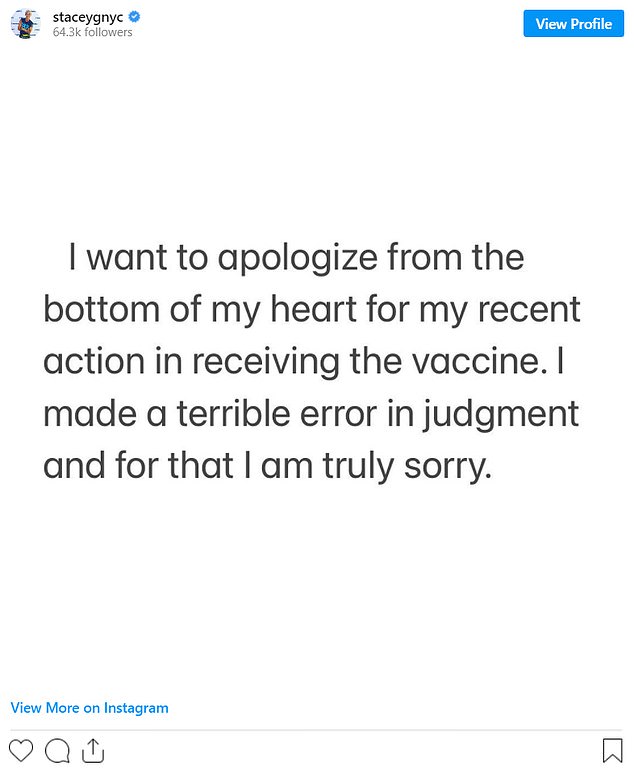 The governor of New York, Andrew Cuomo, and Mayor Bill de Blasio have both complained repeatedly about the scarcity of the vaccine, begging the federal government to send more.

‘My wife is a stage 4 cancer patient who has to deal with the fear and risk of going into a hospital cancer center weekly, while immunosuppressed, during COVID, in order to receive the treatment that is keeping her alive,’ wrote Gabrielle Novacek, a Chicago-based consultant commented.

‘She is at least 2-3 months out from being eligible for a vaccine.

‘As the caretaker she depends on to provide her with support, I’m at least 4-5 months out.

‘But yes, let’s celebrate that we are making the world safe for in-person spin class in the midst of a global pandemic. What’s left of any respect that I had for Soul and the leaders it celebrates is done and gone.’ 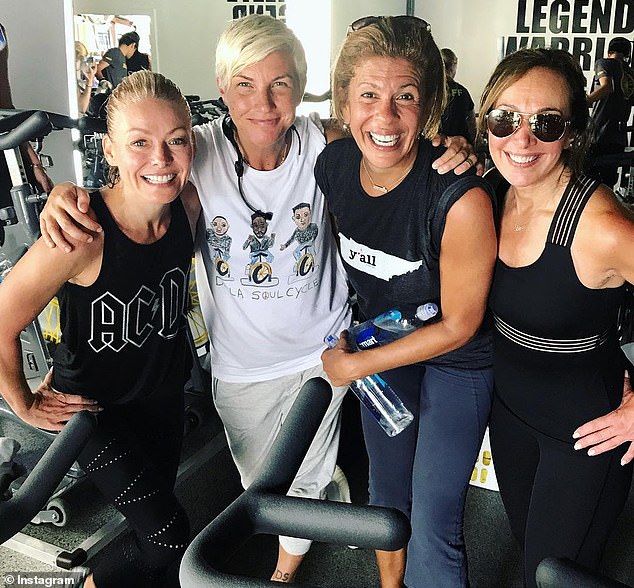 Morning show ladies: She counts Kelly Ripa as a longtime client, and Hoda Kotb has taken her classes as well 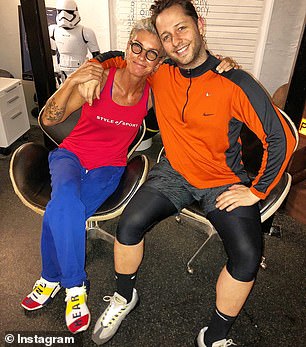 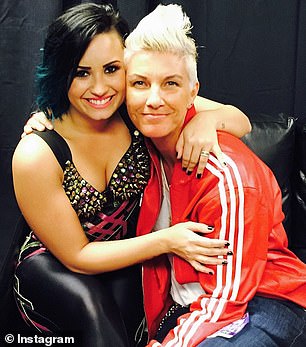 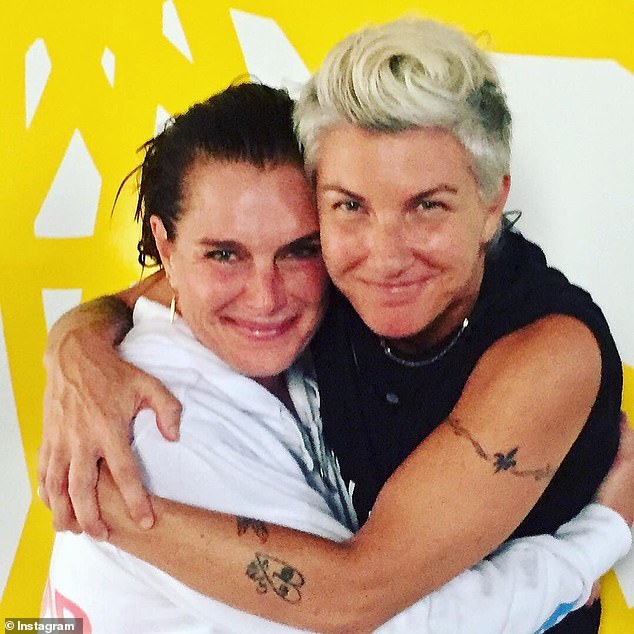 Loyal: Brooke Shields has also been going to her classes for years 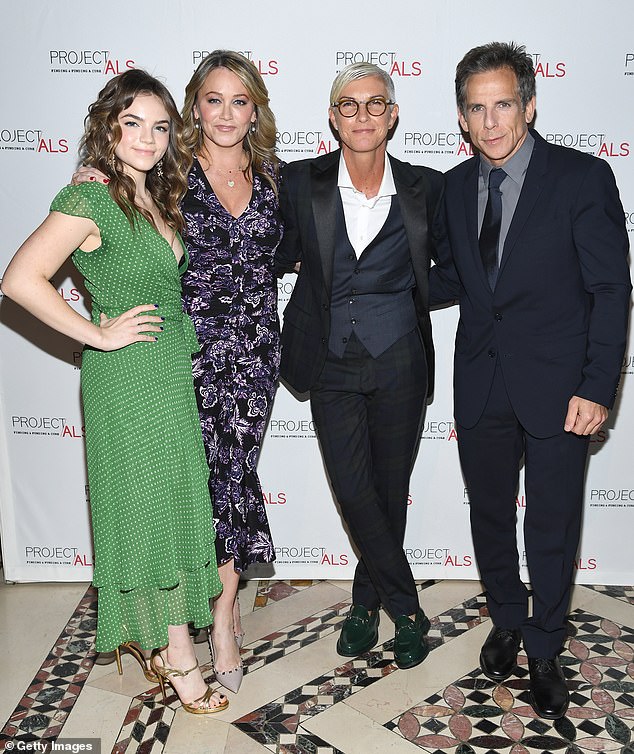 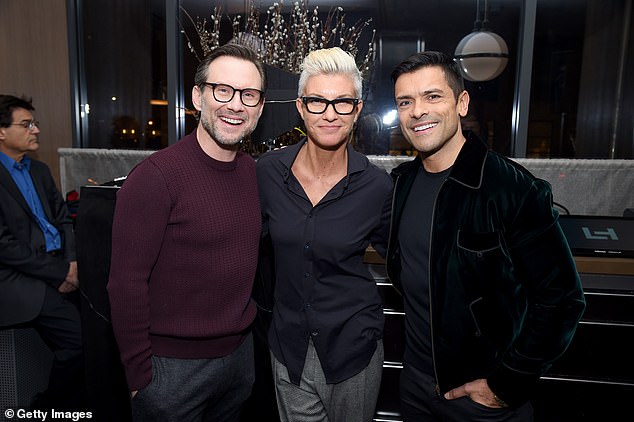 Griffith, who according to earns $800 a class, toldthat her role as an ‘educator’ made her eligible.

‘Having me vaccinated can stop the short spread within groups!’ she said, via text.

‘I function as a common point for many overlapping people. In my profession of health and wellness as a teacher, it’s my priority daily to keep my community and their respiratory systems operating at full capacity so they can beat this virus if they are infected by it. I can only teach to them if I am healthy myself.’

SoulCycle’s indoor classes have been replaced by outdoor sessions during the pandemic.

Griffith added that she ‘had the same opportunity everyone else has by going online and filling out a questionnaire’ and insisted that she pulled ‘no favors, I paid no money to anyone.’

‘All teachers are eligible to apply for the vaccine. My post today was to show my confidence in the system, in our government, and I hope everyone can at least feel more at ease knowing I went through the process!’ she added.

Asked if all SoulCycle instructors would be eligible for the vaccine, she told the site: ‘Absolutely not.’ 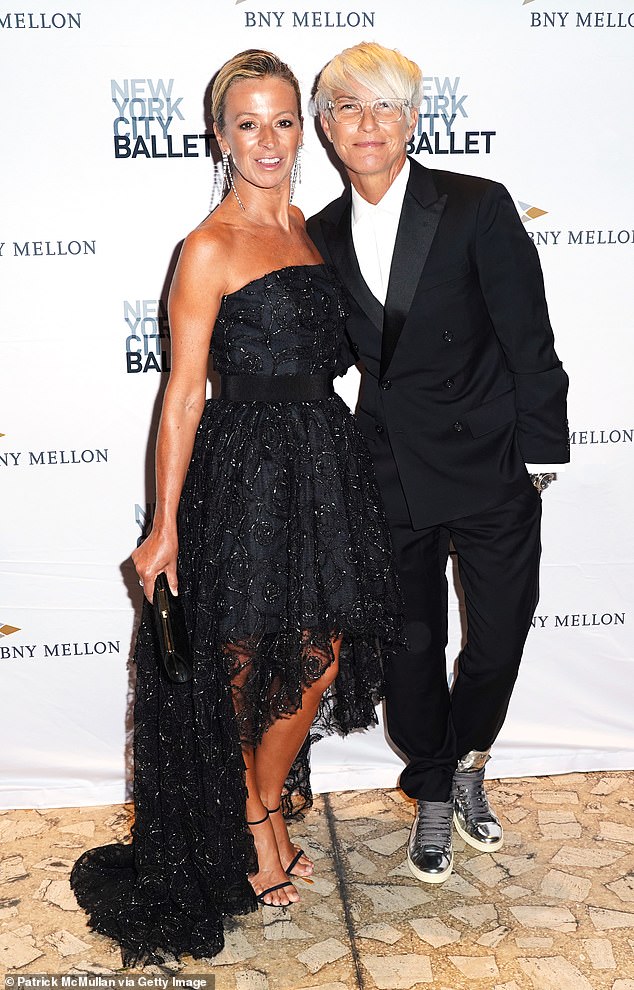 ‘This is sickening. She basically stole a #CovidVaccine dose away from a much more vulnerable person or an actual in-person teacher of children,’ said one person on Twitter.

‘There needs to be a serious $$ fine or public service payback (how about driving the elderly to get their shot?) for line-jumpers.’

Another said: ‘There should be no group classes in NYC at the moment. SC should fire her for impersonating a school teacher.’

New York City is currently in what is termed Phase 1B of the vaccination rollout.

Healthcare workers, residents over 65, grocery store workers, and certain types of teachers are eligible for vaccination.

‘Generally speaking, it’s difficult for us to comment on individuals due to confidentiality,’ said a spokesperson for the New York City Department of Health.

A spokesperson for the New York City Mayor’s office told The Daily Beast: ‘Under Phase 1B, celebrity cycling instructors are ineligible for vaccination.’ 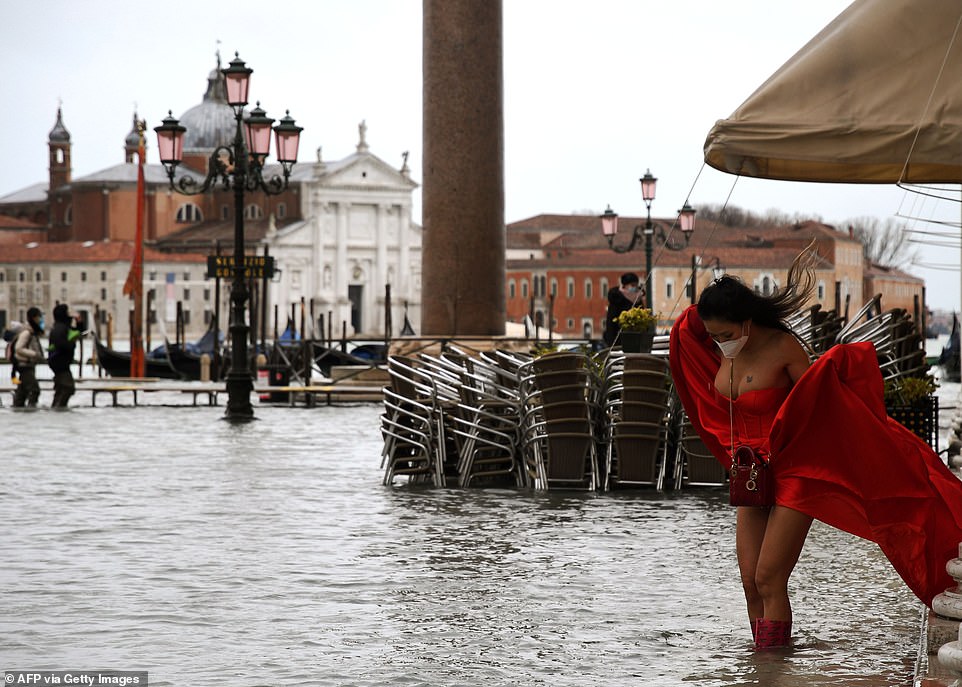 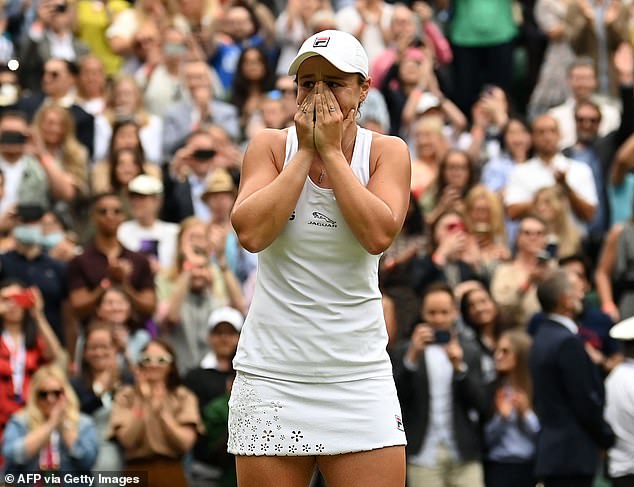 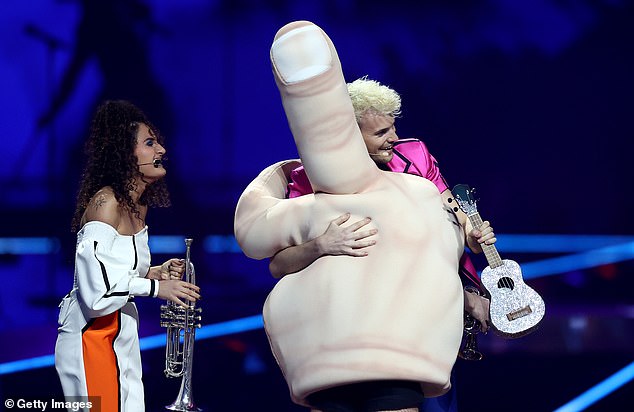 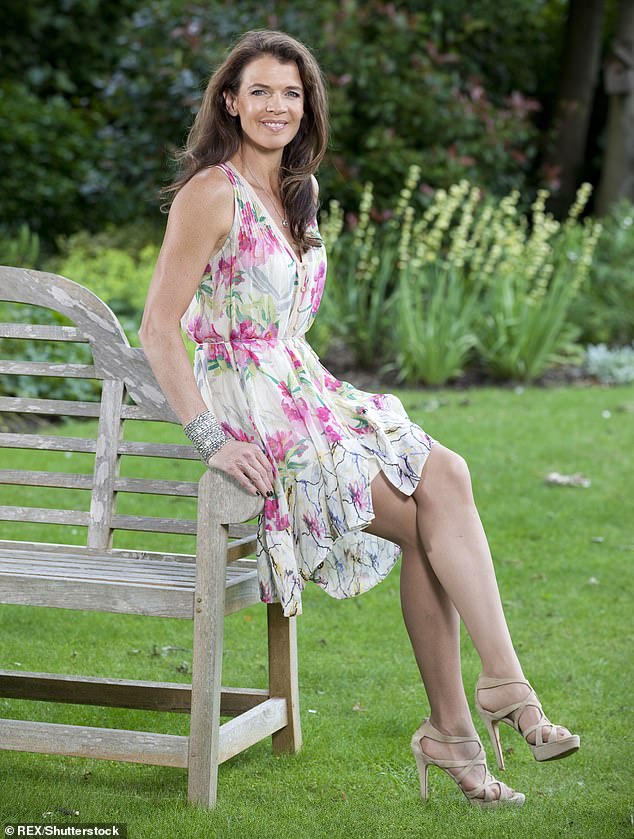 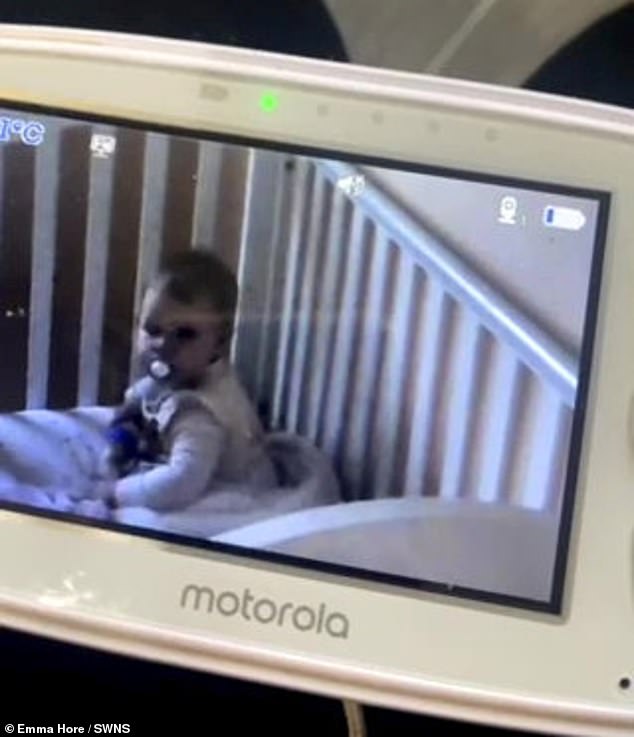 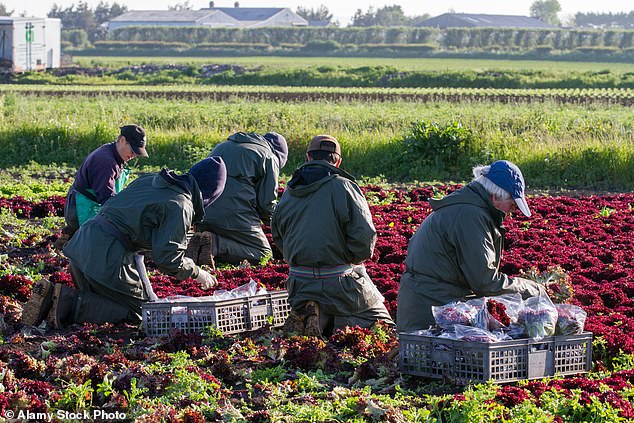 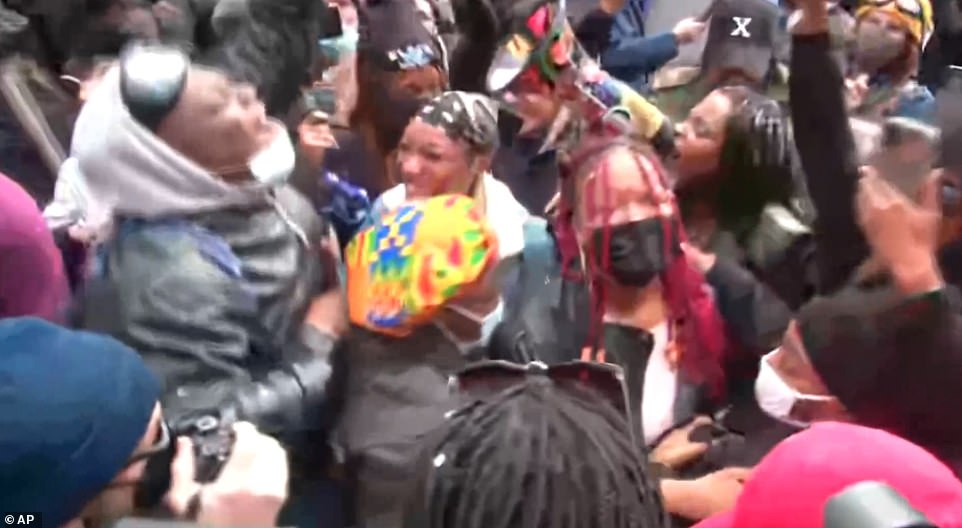