For a true reading of the prevailing post-Brexit attitude towards the UK, don’t bother wading through impenetrable blurb from Brussels.

Just look at a seven-second news clip of ‘Martijn’, a customs officer at the Hoek van Holland ferry port.

The border official this week became famous worldwide after being filmed confiscating a cheese and ham sandwich from a lorry driver who has just arrived from the UK.

The footage shows Martijn and his team of hi-viz honchos poking through the trucker’s snack box and announcing that the sandwich must be destroyed because it contains undeclared British foodstuffs.

The driver — a Pole as it happens —politely asks if he might, at least, be allowed to hang on to the bread. 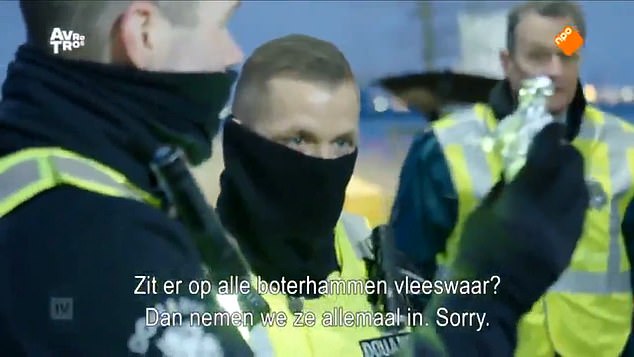 Pictured: A still from footage showing Dutch police officers confiscating food from a British lorry driver. Holding up the man’s ham sandwiches wrapped in foul, they are seen telling him that the sandwiches will have to be confiscated because they have ham in them 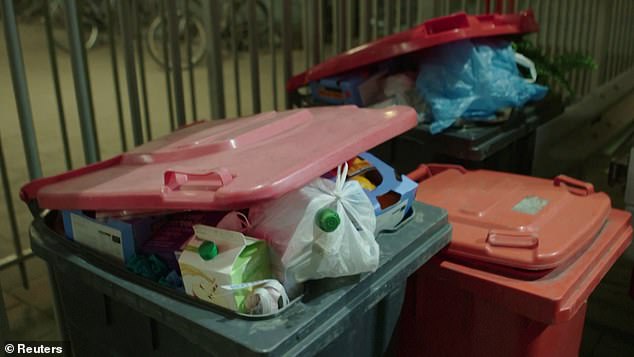 For a true reading of the prevailing European Union post-Brexit attitude towards the UK, don’t bother wading through impenetrable blurb from Brussels. Above, Dutch officials enforce Brexit laws at border

He cannot. ‘Welcome to the Brexit, sir,’ laughs Martijn.

Britain, you have been warned. Henceforth, pettiness shall trump common sense. And we have barely seen the start of it.

This week, I have been travelling around the Kent coast looking at cross-Channel trade. Superficially, it is all moving without a glitch. I stand at the entry to Dover docks and the longest queue lasts all of half a minute as a Spanish lorry driver struggles to find his Covid certificate for Kent police. There is one very simple explanation for this lack of congestion: a serious lack of traffic.

Instead of seeing blockages here at the Channel, these are happening in depots all over the country — and all over Europe, too. There is now so much bureaucracy in the system that goods are just not leaving warehouses in the first place.

‘There are fish markets in Cornwall which have not got a single load to France this week,’ says John Lucy, head of international transport at the Road Haulage Association (RHA). ‘We’ve been talking to companies in Poland and Romania with goods piled up, too. They want to get them to Britain, but they don’t know how to do it and they can’t find anyone to do it.’

For many European hauliers, Britain is simply too much trouble. The UK authorities may have adopted a light-touch, flexible system for the next six months. Europe, however, has been rigid from Day One of Brexit.

So, while it is relatively easy to get a truck full of stuff into the UK, it’s much harder to get your vehicle back into Europe (sandwich or no sandwich).

The solution could be an army of customs agents to sort out the paperwork, but most vanished in 1993 when Britain joined the single market. 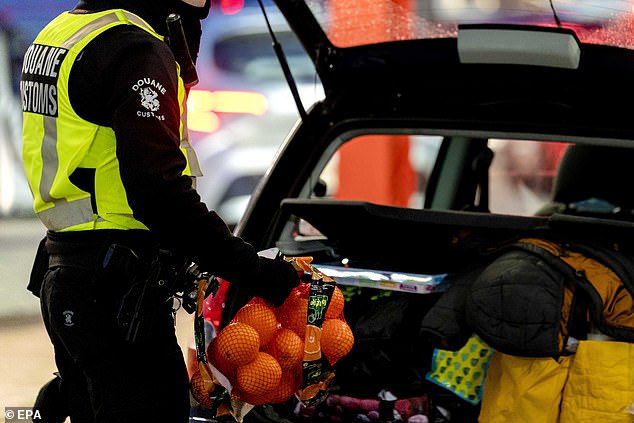 ‘Back then, there were 200 brokerage businesses in Dover alone. Now there are 15,’ says Mr Burnett. And training up a new customs agent can take three years.

In December, there was utter chaos in Dover as a surge in pre-Christmas and pre-Brexit trade suddenly coincided with the ‘Kent’ strain of the virus.

France closed its borders and tens of thousands of vehicles were stuck for days on end. Eventually, the old RAF Manston airfield became a huge Covid testing centre and France reopened.

Today, though, I count just 15 lorries on the Manston runway. It’s a slick operation, run by the Army. A driver pulls up, gets a Covid test in the open air, has a result in a matter of minutes and is back on the move again. 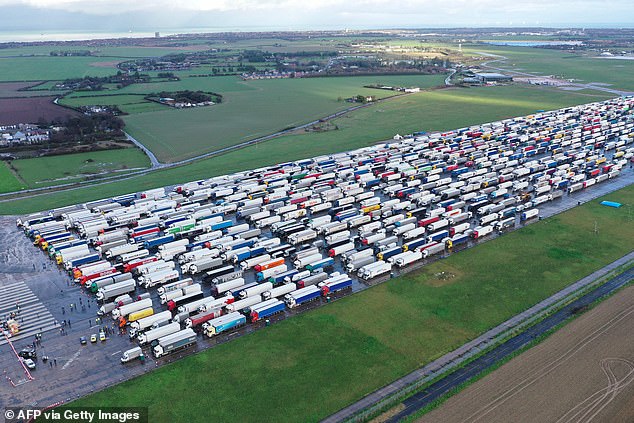 Many then head to the nearest lay-by or truckstop where they just wait. For the tricky thing now is not getting a Covid test. It is getting the wad of papers you need for the head-spinning series of checks before entering France.

Each truck needs a Kent Access Permit just to enter the county — a barcode which will be checked by the police en route. You are only supposed to get one once your customs paperwork is in order.

In theory, it’s a good idea. In practice, it doesn’t work. I meet drivers who have driven into Kent with ostensibly the right paperwork only to hit snags when they reach the coast.

Night is falling at Folkestone Services when I meet Darren James from Caerphilly, driving silicon waste for recycling in Belgium, from where he will return with a cargo of gelatine.

Pre-Brexit, he’d be in Europe by now. Yet it’s nine hours since he left home and he will be here all night as his firm still can’t obtain two forms online.

It was the same last week. ‘Then when I got to Belgium, it was a four-hour wait to clear customs. The chap was perfectly nice, but the computer kept saying no. It only used to take him half an hour,’ he says. Darren is in good spirits and has yet another Jack Reacher book — his 11th — to fill the longueurs. Even so, after 28 years of driving, he can’t see much of a future if things carry on like this. 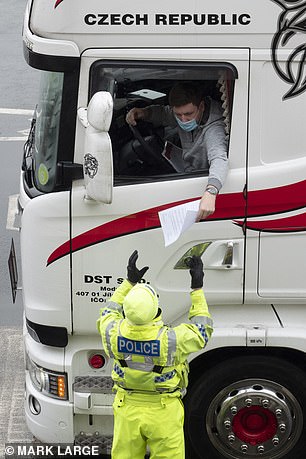 Here I also meet Tony and Theresa Pleyer, husband-and-wife drivers from Lincolnshire who have been working together for 23 years. They are supposed to be taking acoustic felt to southern France, yet when they tried to clear customs earlier, the Border Force computer told them their barcode was invalid. So they are waiting for another one.

They are later told to spend the night in Kent. Come the morning, they will be told to leave this load and drive an empty trailer to a French factory to collect car parts.

They are a delightful couple who look back fondly on the days when a job might take them down through Spain to the Algarve and back with a succession of loads.

‘Portugal’s a lovely safe country,’ says Theresa. They have had a few hairy moments — run-ins with would-be stowaways and the odd posse of striking French farmers — but it has been a good life.

‘It can be nice driving in Europe. There’s more space and they generally keep the traffic moving,’ says Tony. ‘But this is doing our heads in.’ Also exasperated is their boss, Lorenzo Zaccheo at Alcaline, a Kent-based fleet of 200 trucks, all proudly bearing the Union flag. It has been serving ‘just in time’ customers for years.

‘I’m afraid ‘just in time’ died last week,’ he says. It should not be like this, Lorenzo adds, pointing to the easy movement of goods in and out of the EU on the Swiss/French border, where there is still paperwork but it is cleared in minutes. ‘It’s a piece of cake.’

So what does he think of a driver having his sandwich confiscated by a Dutch jobsworth? ‘That was disgusting. The poor guy had a sandwich to eat, not sell.’

Sandwichgate has been illuminating on so many fronts.

It shows that British divisions over Brexit have not eased. A quick scan of social media shows that Dutch customs officer Martijn is now a folk hero for Remainers. Brexiteers, meanwhile, are calling for an Edam boycott.

Many Dutch, to be fair, will be embarrassed. Children in Holland are raised on stories of Operation Manna, the first major humanitarian airdrop in history. In 1945, parts of occupied Holland were starving in what is still called the ‘Hongerwinter’ (‘Hunger Winter’).

So the RAF filled Lancasters with food and flew dangerously low in broad daylight over enemy territory to drop food on an emaciated Holland. I have seen Dutch witnesses in tears recalling how this ‘manna from Heaven’ saved their lives.

You won’t hear them cracking ‘Welcome to the Brexit’ jokes. Perhaps they could have a quiet word with merry Martijn. 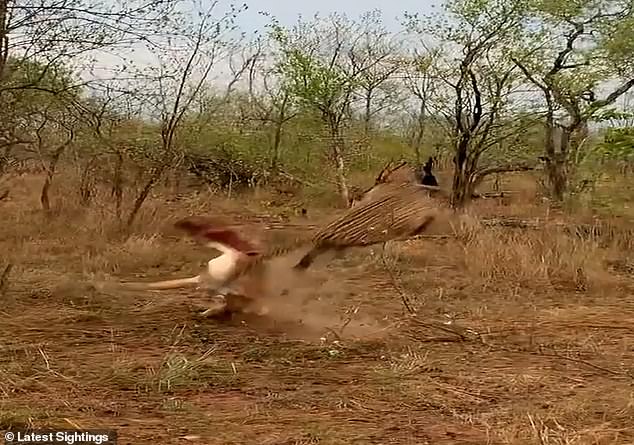 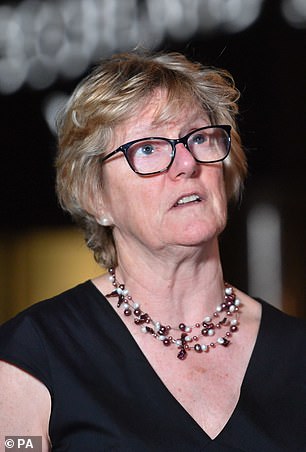 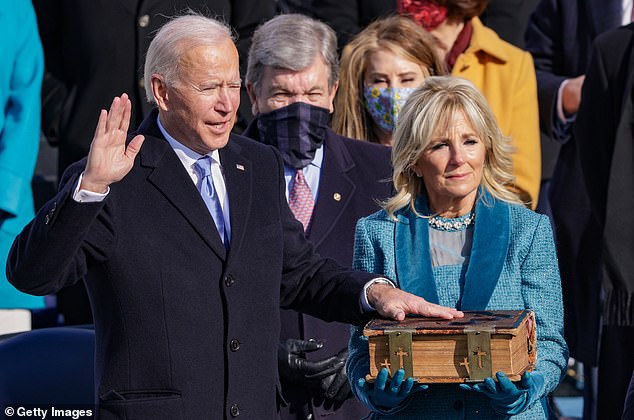 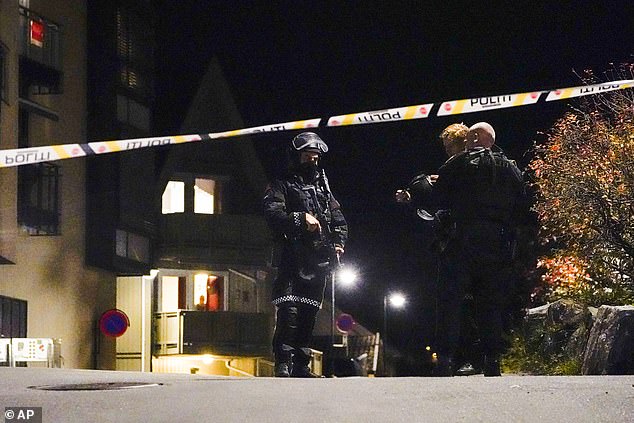 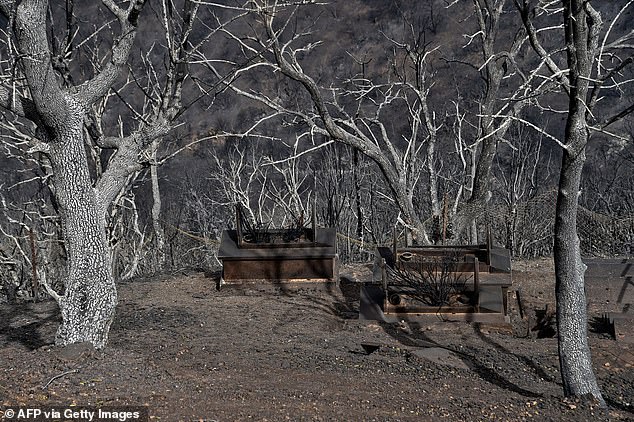 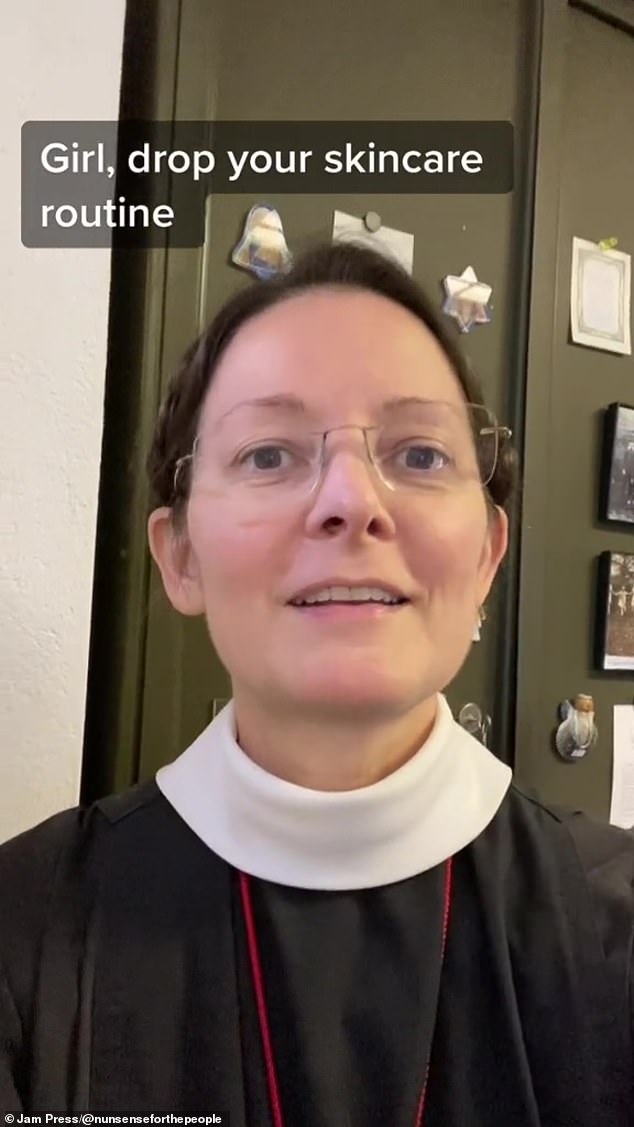