Officers have been seen forcing their way into a family home for ‘having too many people inside’, as benches were taped off and visitors turned away from beauty spots during the continuing crackdown on Covid rule flouters.

Two policeman knocked on a door in Aberdeen after complaints from a neighbour and stormed in as a woman shouted ‘this is my house, get out of my house’ and children screamed in the background.

Two women, aged 18 and 48, and a 43-year-old man were charged in connection with assaulting police officers and threatening and abusive behaviour.

The footage immediately sparked controversy, with critics accusing the police of ‘oppressive’ behaviour for storming into a private house – while others argued they were just trying to enforce the Covid rules.

Meanwhile, police at Euston were seen stopping passengers to ask where they were going. Barrister Alex Wright tweeted: ‘Good to see lockdown being taken seriously, but a sad sight that I’d have dreamed of seeing in London.’

Snowdonia National Park has now closed all its car parks to visitors to ‘protect our communities and the NHS’, as officials slammed the public for ‘disregarding’ the law.

yesterday said it is ‘right’ for officers to confront Britons sat on park benches and argued that police should stop people and demand to know why they are outside their homes.

Police cars were patrolling the market square in Ely this morning to ensure people were obeying the rules. All the benches in the Market Square were also cordoned off with red tape to prevent residents sitting down.

As the crackdown continued – 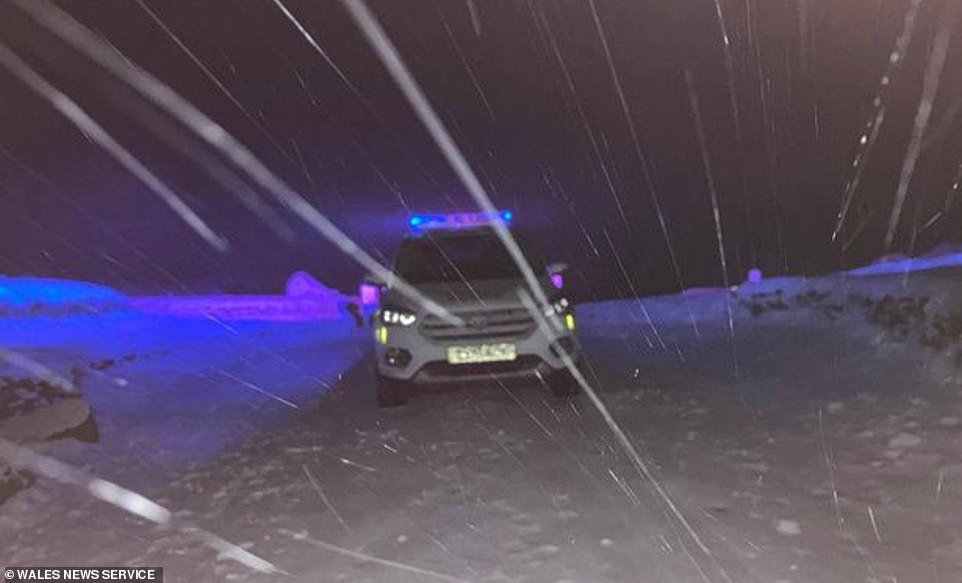 All car parks in Snowdonia National Park have now been closed to visitors. Pictured is a police car patrolling the beauty spot last night 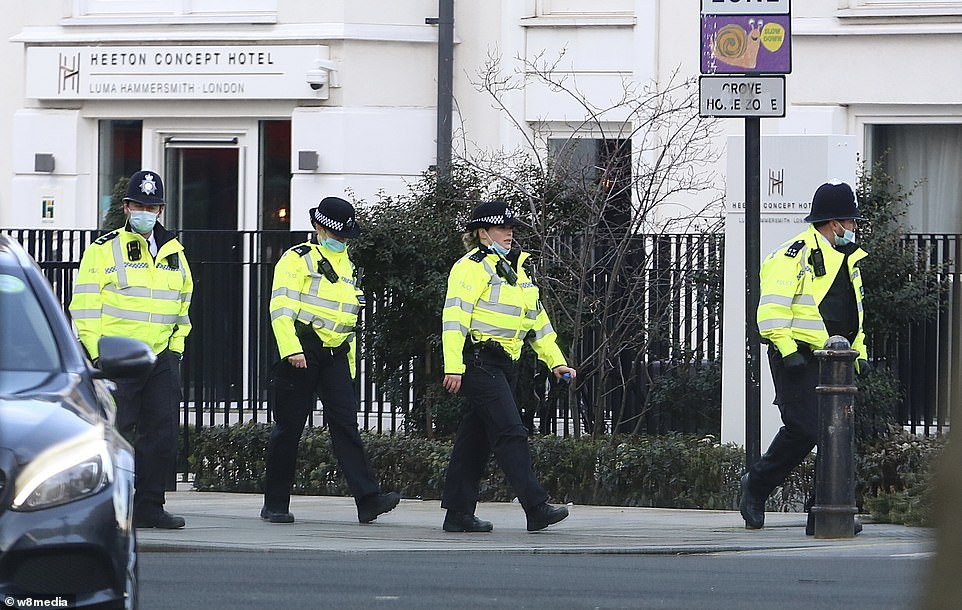 The Met has vowed not to warn people any longer and punish them with fixed penalty notices of at £200 for first offences, and these officers were also stopping cars 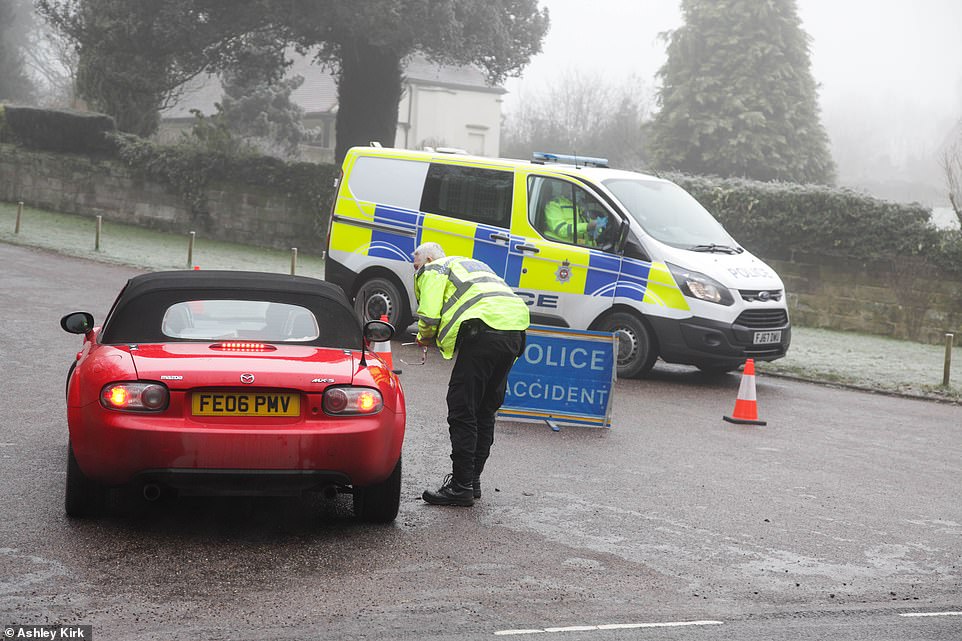 Derbyshire police were pictured turning drivers away at a vehicle checkpoint at Calke Abbey, near Ticknall, yesterday afternoon 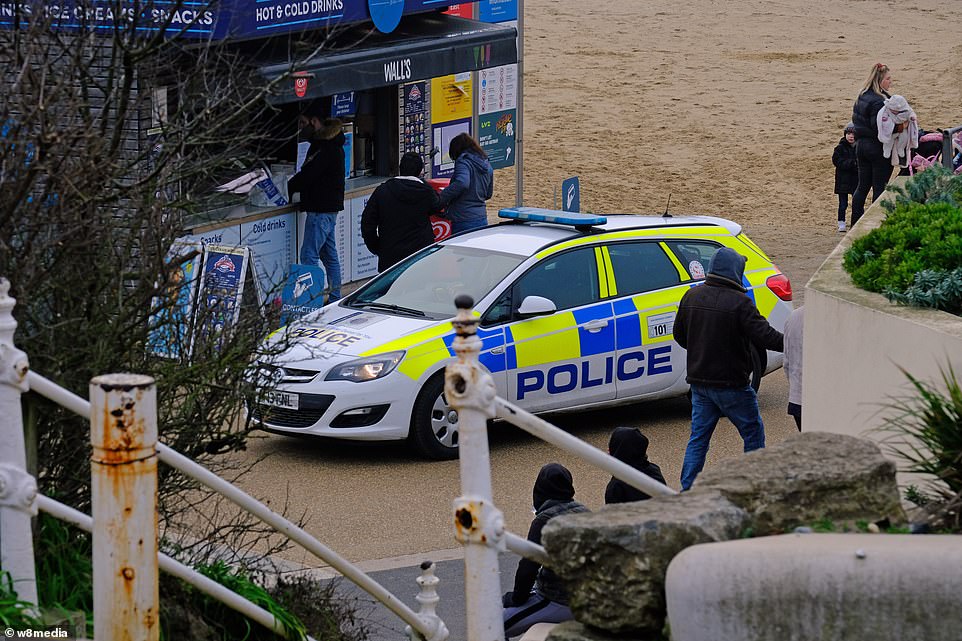 Police at Euston were this morning seen stopping passengers to ask where they were going. Barrister Alex Wright tweeted: ‘Good to see lockdown being taken seriously, but a sad sight that I’d have dreamed of seeing in London’

Footage taken in Aberdeen at 11.20pm on Wednesday before being shared online showed a police officer standing inside the hallway of a home as a woman was held back by another man.

She said: ‘My house. That is bullying. This is my house. Get out of my house. I did not ask you in here.’

What is a ‘reasonable excuse’ for leaving home?

You can be given a Fixed Penalty Notice of £200 for the first offence, doubling for further offences up to a maximum of £6,400.

There are further reasonable excuses. For example, you may leave home to fulfil legal obligations or to carry out activities related to buying, selling, letting or renting a residential property, or where it is reasonably necessary for voting in an election or referendum.

A young boy can be seen in the video as the woman’s daughter said: ‘Just stop it mum’.

A police spokesman said: ‘We received a complaint from a member of the public regarding a breach of coronavirus regulations at a property in Aberdeen, around 11.20pm on Wednesday, 6 January, 2021.

‘Officers attended and two women (aged 18 and 48) and a 43-year-old man were charged in connection with assaulting police officers and threatening and abusive behaviour and will be reported to the Procurator Fiscal.’

Police officers are legally allowed to enter Britons’ homes if ‘that person reasonably suspects that an offence under regulation 5(1) is taking place on the premises,’ according to legislation.

Just hours after the Home Secretary threw her support behind the crackdown yesterday, it emerged that officers in Birmingham questioned a couple with pushchair to ask what business they had in town.

Snowdonia National Park took the decision to close its car parks yesterday after an ‘increase’ in the number of people disregarding Covid rules.

Officials said people could only take part in exercise that started and finished in their own home.

Nigel Harrison, Temporary North Wales Police Assistant Chief Constable said: ‘We understand that people want to go outside to enjoy the mountains and snow, however this is a national emergency and we will continue to work with our National Park colleagues to ensure that Welsh Government restrictions around essential travel are adhered to.’

The World Physiques Gym in Mansfield was raided by police on Monday, with one person at the venue fined £1,000 and another £200 for breaching Covid guidelines.

In Rochester, licencing officers forced the closure of the Hop and Rye pub after finding six people drinking on November 28 last year during the second lockdown.

It came police spotted two maskless men getting out of a cab in Crewe at 3am yesterday before going into a shop and buying a case of beer.

When approached by Cheshire Police officers they said they were ‘unaware’ of the lockdown and the way coronavirus is spread.

Under the national lockdown rules face masks must be worn in shops unless medically exempt from doing so.

‘The officers were on patrol in Crewe at 3am when they spotted two men leaving a taxi without a face covering.

‘On leaving the shop, the officers approached the men to engage and explain the lockdown regulations while also reiterating the importance of wearing face coverings.

‘The men said they were not aware that a lockdown was in place and were also unaware of how their actions could result in the transmission of coronavirus to others.

‘The officers told the men they would be receiving a fixed penalty notice (FPN) each for their blatant breaching of the coronavirus rules.’

Exercise and essential journeys are the only reasons people are allowed to leave their homes.

In Crowborough, East Sussex, the local running track was closed today due to the ban on sports venues. 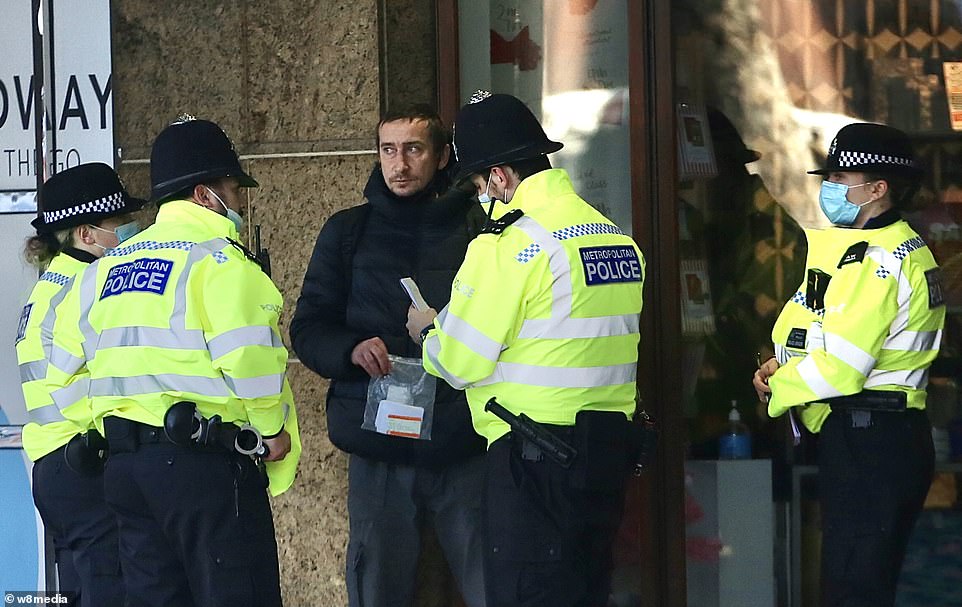 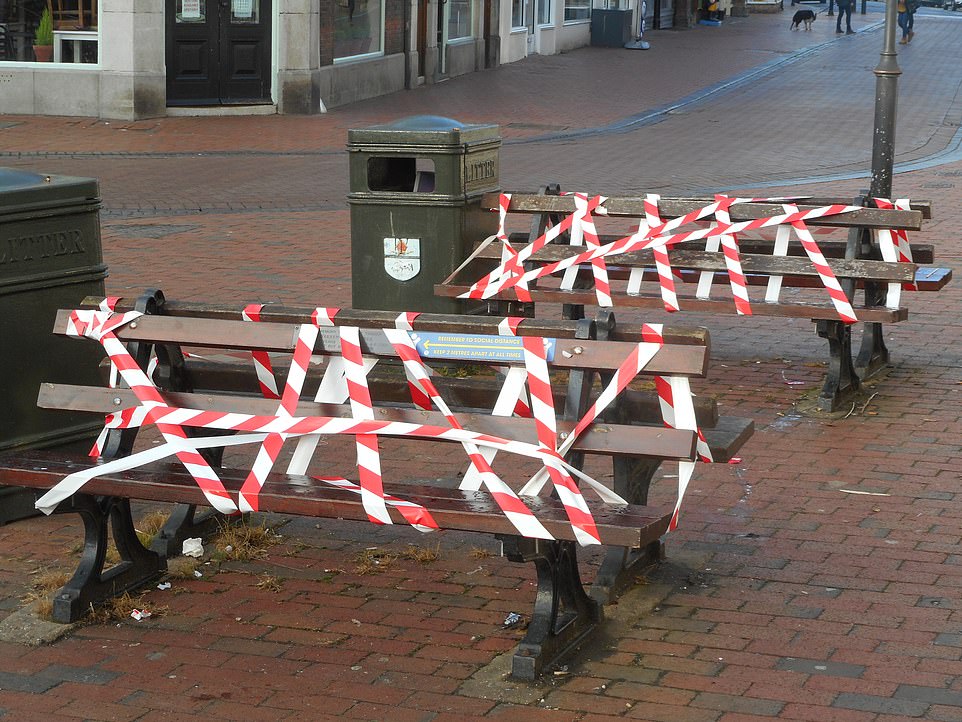 One MailOnline reader sent a picture of these taped off benches in Ely, Cambridgeshire, claiming they are not allowed to be used because of the pandemic 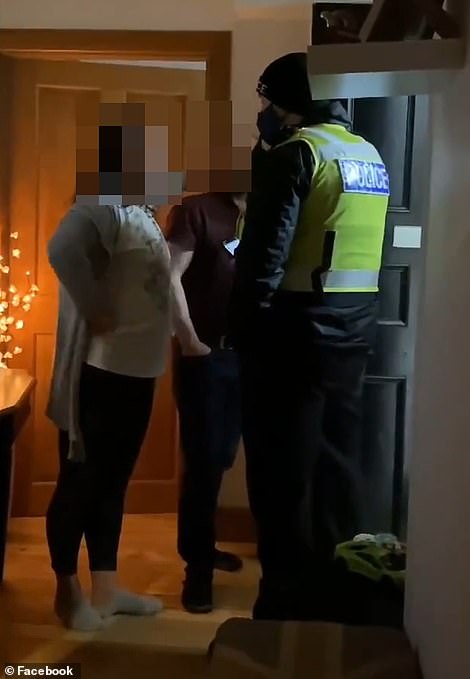 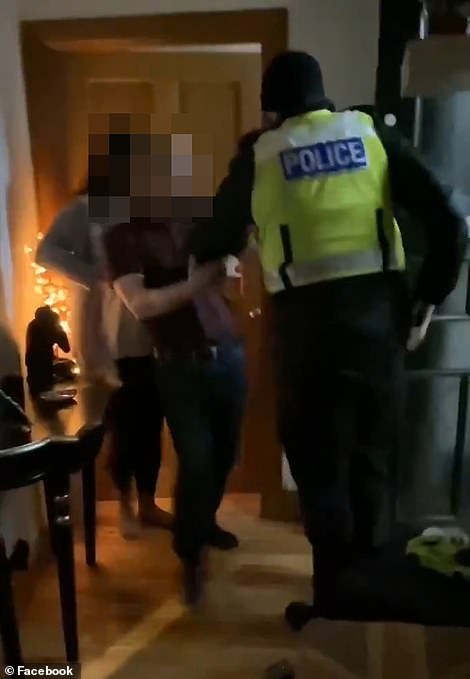 Two police officers knocked on a door in Aberdeen at 11.20pm on Wednesday after a member of the public reported a breach of coronavirus restrictions

It came as a furious pub owner has posted a sign on his parish hall notice board telling villager to ‘f*** off’, after being reported to the police.

Keith Waterhouse, who owns the Badger’s Holt in Bridgetown, Somerset, posted the note on Bridgetown Village Hall after police officers visited him after reports he was breaching Covid-19 rules the previous day.

The note read: ‘Whoever the nasty, vindictive b****** is that reports me to the police for a completely incorrect breach of Covid rules, have the b******* to talk to me first and find out the truth.

A red-faced policeman was stopped by officers from his own force and asked where he was going during coronavirus lockdown.

Insp Lee Wiggan was on his way to a meeting at his police headquarters when he was asked to justify his movements by a police officer. It comes as cops said they will beef up the approach to lockdown breachers and impose £200 fines for anyone out without a valid reason.

Insp Wiggan – who covers the Ladywood East area of Birmingham – was on his way to the meeting in the city centre at the West Midlands Police Lloyd House HQ.

He was stopped on Wednesday morning. The policeman tweeted: ‘On my way to a meeting at headquarters and got asked to explain my reason for being in town by Brum City Centre Police. Keep up the good work team.’

Meanwhile, in London yesterday, one man who was stopped outside Hammersmith Tube station was asked to provide his name and address, which was written down and checked by officers, and the reason for his journey. The man was allowed to enter the station and continue travelling but refused to comment on whether he had been fined.

One officer told MailOnline: ‘We’re all over the area to enforce Covid laws and make sure that people are out for the right reasons. If you’re not local or don’t have a valid reason to be out, then you will be fined.’

But the police officer revealed that they had not issued a single fine as most people have been adhering to the rules. saying: ‘I think the message is getting through that you should only be out for essential reasons’.

In Birmingham, an exchange between two officers and a couple with a pushchair walking through the city centre only ended when the man produced cash from his pocket and told officers they were going to pay in money at a bank.

The pedestrian, who did not want to be named, said: ‘I don’t know why they picked on us.

‘They just asked why we were in the city centre and when I explained about the bank they left it at that. I think it’s just a matter of control really.’

The same pair of Police Community Support Officers then quizzed two men languishing by a shop doorway and threatened one with a £250 fine if he did not leave.

Isaac, 33 – who only provided his first name – said: ‘I have to come into the city centre to pick up my methadone from Boots pharmacy.

‘During the first lockdown they would give us two weeks worth so as to stop us making so many trips out but this time they are only giving it to last a day so we will have to be back tomorrow.

‘The officers were very fair because my friend is not really allowed in the city centre and could have been given a £250 fine on the spot and not just a warning.’

His friend Luke, 34 – who also declined to supply a surname – added: ‘Methadone is not something you want to be picking up in your local area so I come to the city centre.

‘These officers were fair. They told us not to hang around and to make our way home.

‘Another officer would have taken a much harder approach.’ 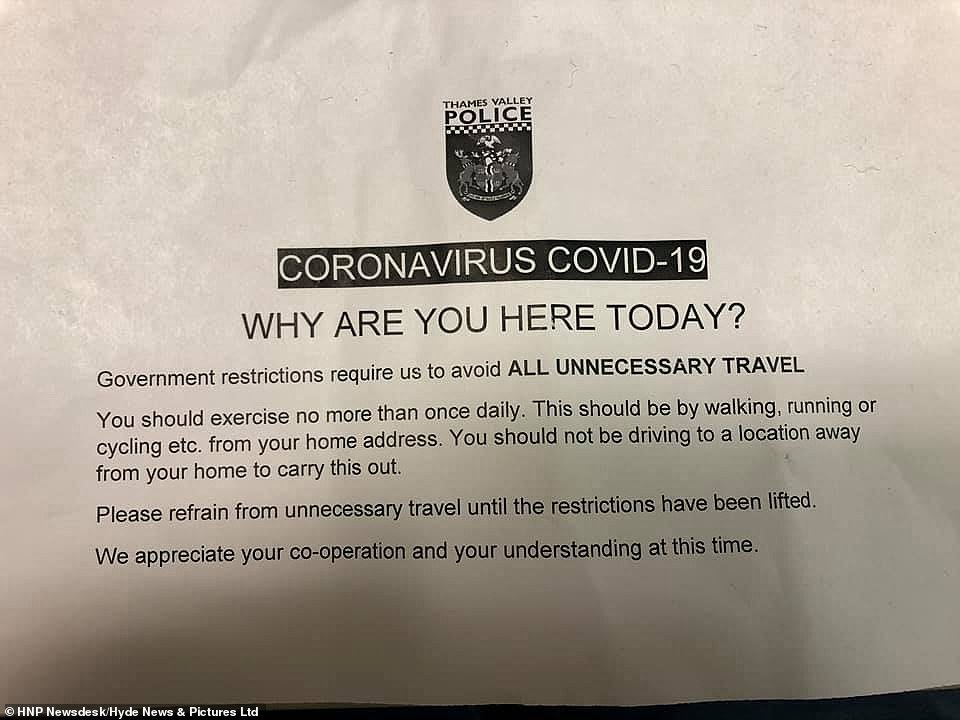 Thames Valley Police apologised for the behaviour of an officer who they said was ‘a bit keen’ in handing out leaflets outside a Tesco in Maidenhead earlier this week asking drivers ‘why are you here today?’ 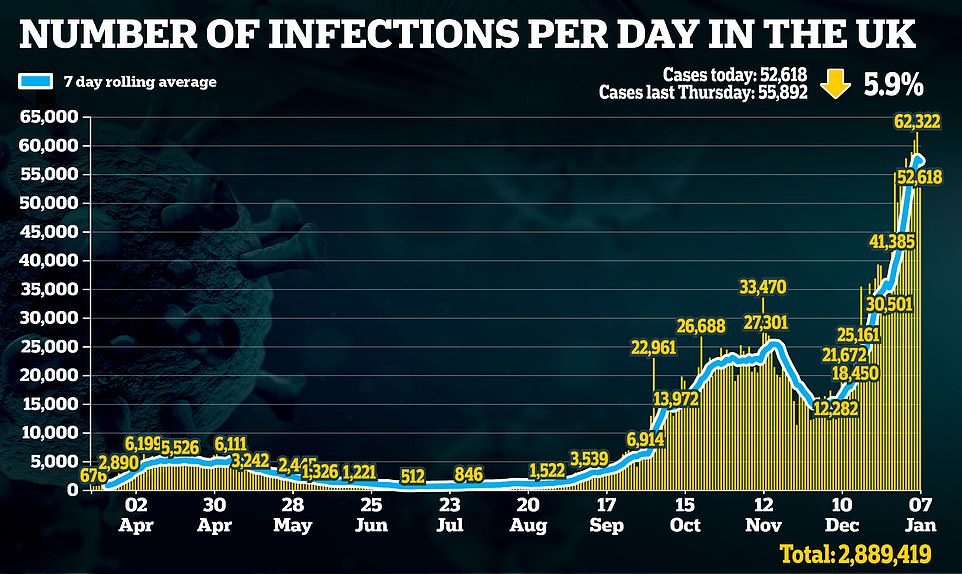 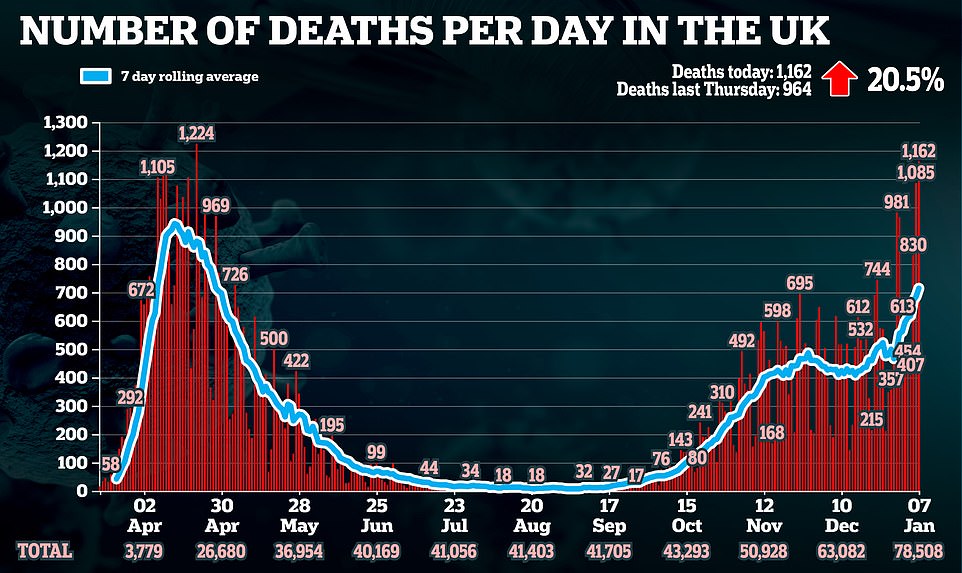 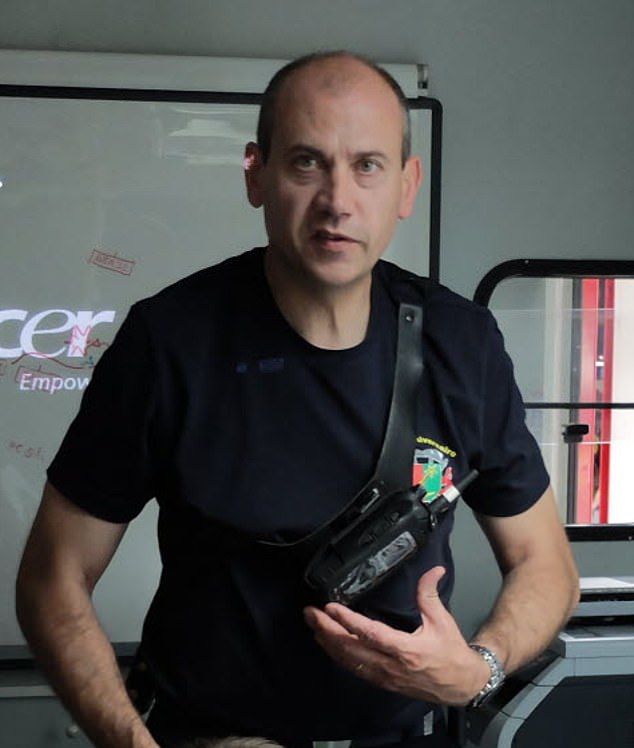 Grenfell cladding firm chief is a part-time fireman in France 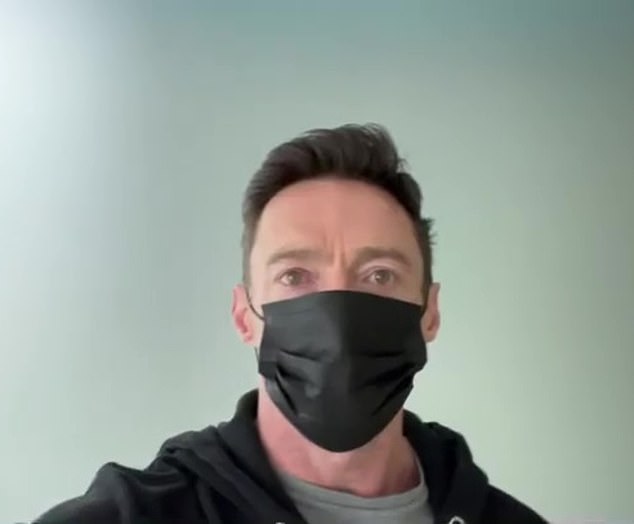 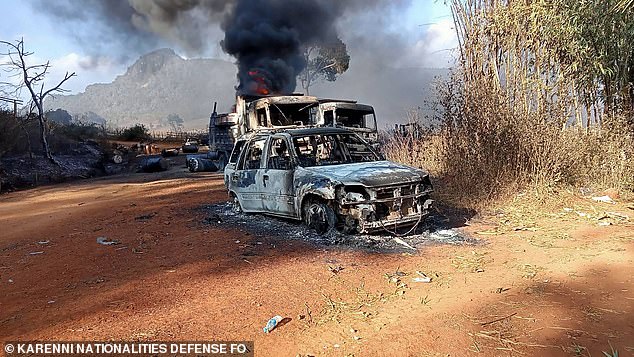 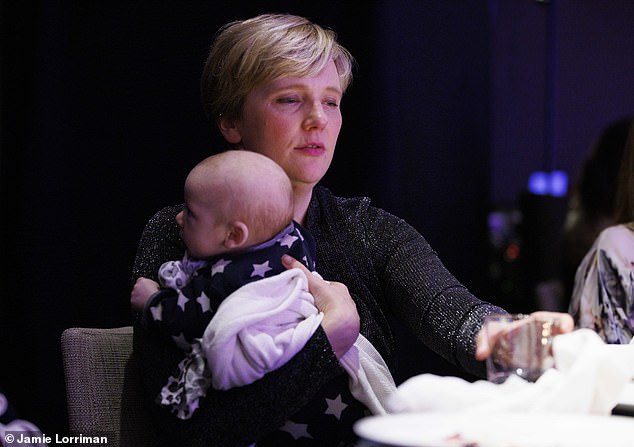 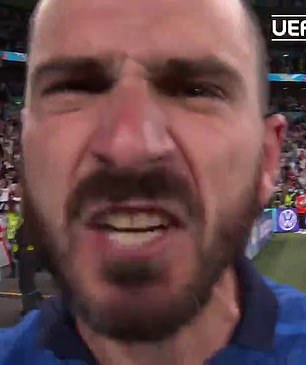 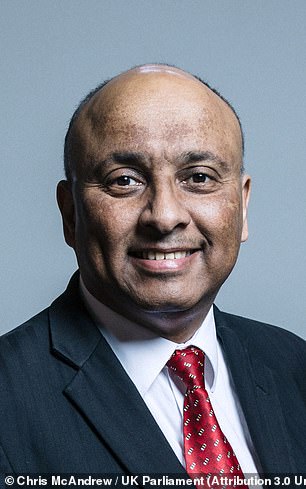 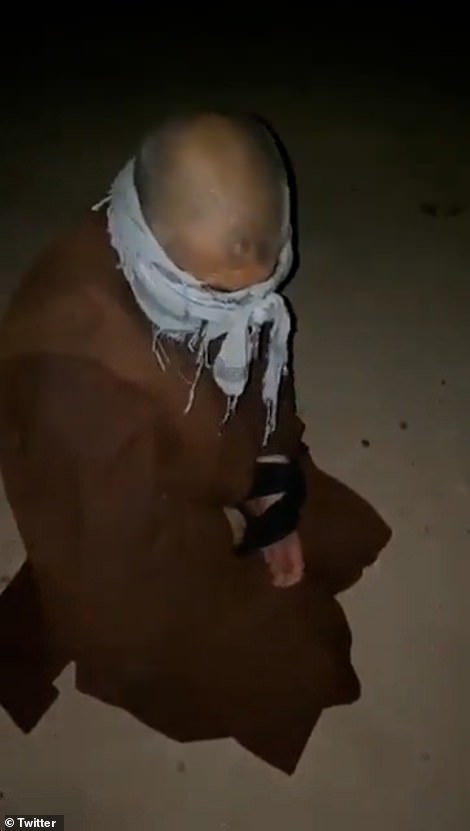 The TRUE face of the Taliban: Reports show madmen’s ‘new image’ for the sham it is 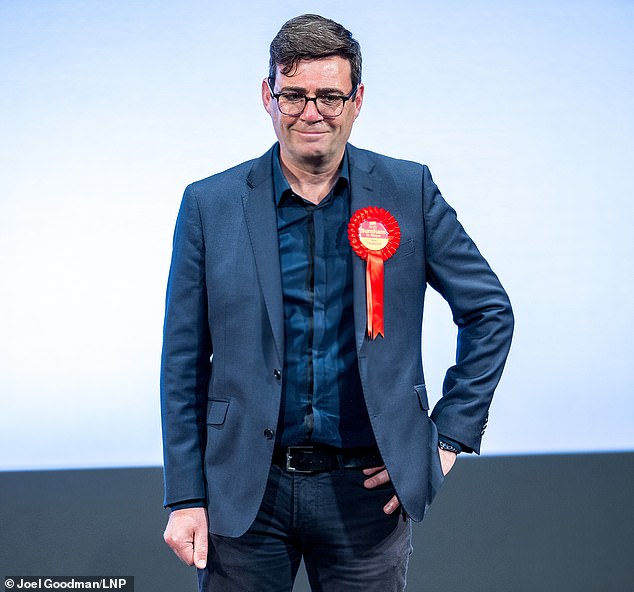