She has suffered with trichotillomania, also known as compulsive hair-pulling, for more than 20 years.

And Sam Faiers has candidly revealed that she is still struggling with the disorder, after seeking therapy in a bid to cure her trichotillomania.

The Mummy Diaries star, 30, was asked by a fan, who said they also struggle with pulling out their eyelashes, how she was dealing with the condition. 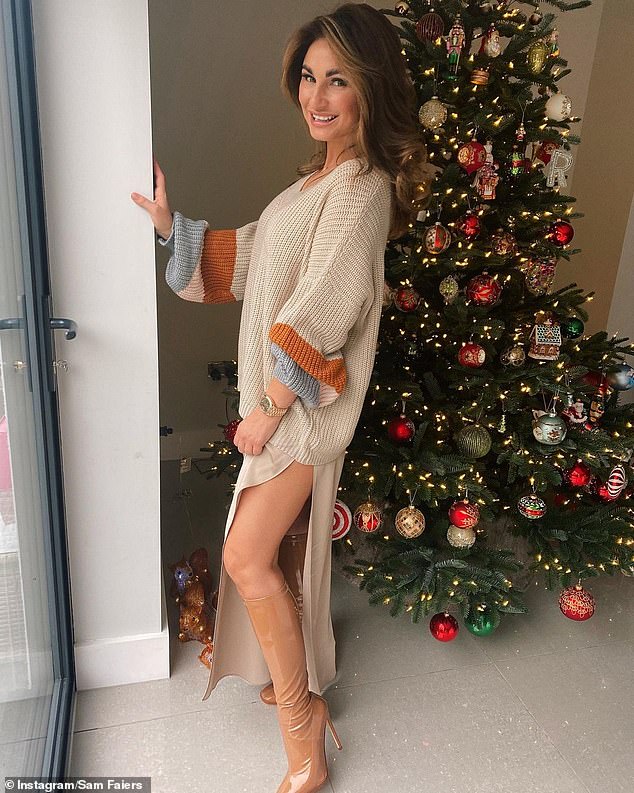 Battle: Sam Faiers has candidly revealed that she is still struggling with the trichotillomania, after seeking therapy in a bid to cure her compulsive eyelash pulling

Taking to her Instagram stories on Tuesday, Sam admitted that her many attempts to stop herself pulling out her eyelashes were not going ‘great’.

The former TOWIE star explained that she ‘picks’ her eyelashes during her sleep, which means it is ‘really hard to get it under control’.

She shared a candid make-up free snap to show her 2.5million followers her lack of natural lashes, revealing she normally wears ‘a little eyeliner’ so it is ‘not so obvious’.

Answering her fan’s question, she emotionally penned: ‘Not great… I’ve honestly tried almost everything you possibly could do. 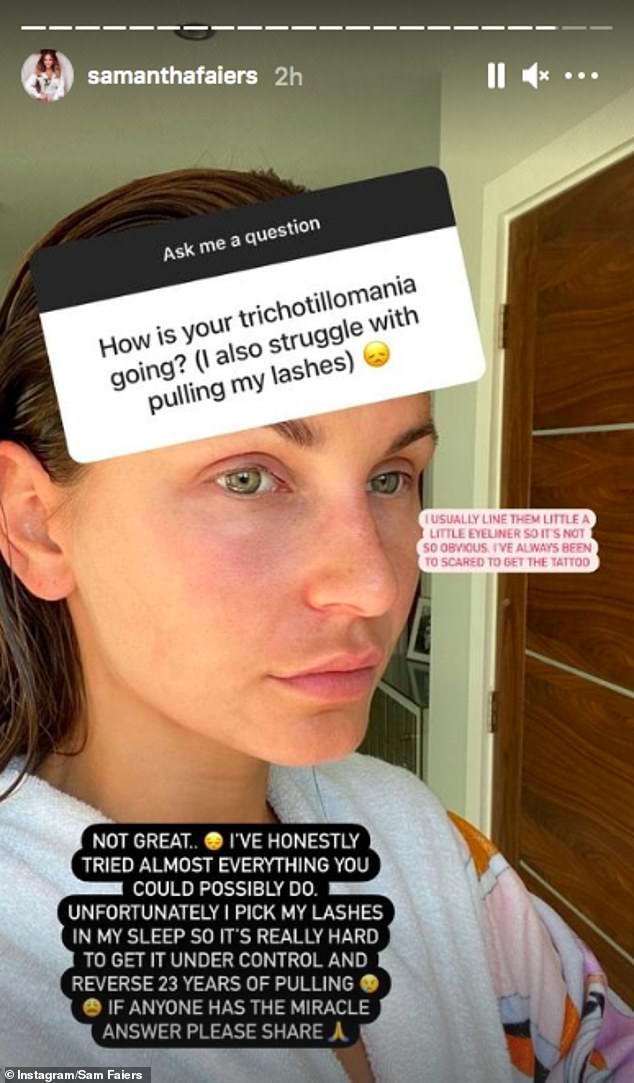 Struggling: Taking to Instagram on Tuesday, the Mummy Diaries star, 30, explained she ‘picks’ her eyelashes during her sleep, which means it is ‘really hard to get it under control’

‘Unfortunately I pick my lashes in my sleep so it’s really hard to get it under control and reverse 23 years of pulling. If anyone has the miracle answer please share’

Before adding: ‘I usually line them little a little eyeliner so it’s not so obvious. I’ve always been too scared to get the tattoo’

In March last year, she revealed her beau Paul Knightley started strapping her fingers together with medical tape to help her stop picking out her eyelashes while asleep.

Sam said her eyelashes had begun growing back and she wanted to hold an ‘eyelash party’ to celebrate when she felt confident enough to show off her natural lashes.

Speaking to camera in an episode of the Mummy Diaries, Sam explained: ‘I’m actually really pleased with how far I’ve come, because my eyelashes are starting to grow back.’ 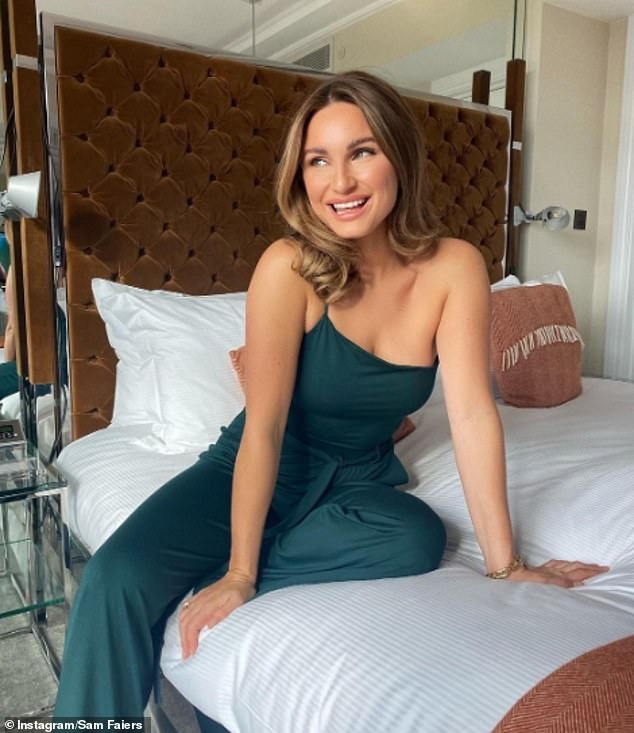 Make-up: Sam admitted that she normally wears ‘a little eyeliner’ so that her lack of natural eyelashes is ‘not so obvious’

The mother-of-two told her sister Billie, her mother and Luisa Zissman: ‘In the day I’m so conscious now, it’s just sleep. I watched the night cam and I’m literally picking my eyelashes all night.

‘Paul strapped my fingers together the other night with medical tape, and he done it too tight and my whole hand was pulsating, so I had to take it off.

‘And he went “I knew you’d wake up in the morning and it’d be off” and I said; “No I had to take it off, Paul, it was too tight!” The end of my fingers were throbbing.’

‘I am so determined to grow an eyelash party and I want every mascara. I wanna give giftbags with mascaras.

‘No fake eyelashes for this party, because I’m going to be showing off my actual own real eyelashes! That is the end goal.’ 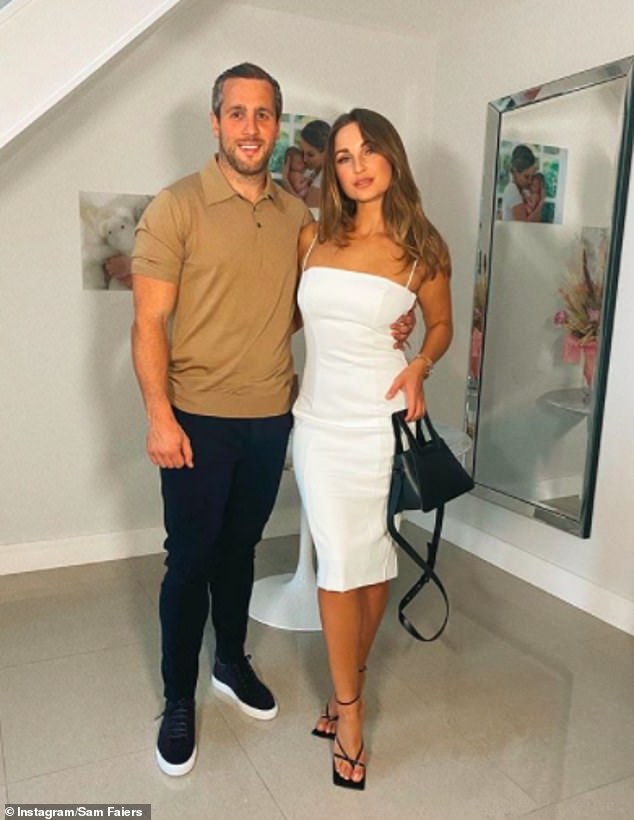 Desperate measures: In March last year, she said her beau Paul Knightley started strapping her fingers together with medical tape to help her stop picking out her eyelashes while asleep

Sam’s condition was first triggered during her childhood when her stepfather Dave Chatwood was sent to prison, and she was diagnosed when she was eight years old.

She previously explained that she first started to pull out her eyelashes when a friend told her ‘if you pull out your eyelashes your wishes will come true’, leading to her wishing for her stepdad to come home from prison.

The TOWIE star revealed back in 2019 that she had decided to seek treatment for her eyelash-pulling when her daughter Rosie, three, started copying her.

Sam said when she would breastfeed Rosie, who was 14 months old at the time, she would pull her eyelashes and saw her daughter would rub her eyes because she was copying her.

The reality star said that moment was a red flag for her and that was when she knew she needed to get help for the condition. 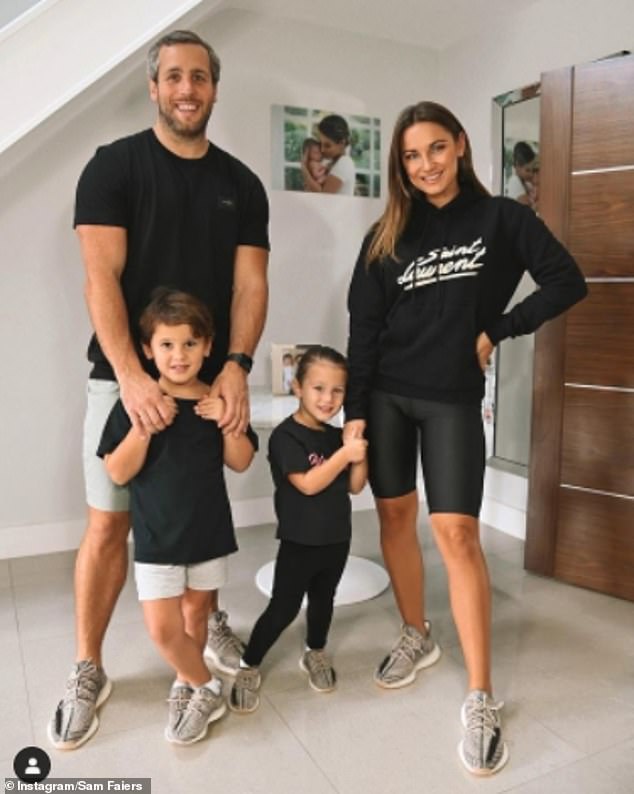 Therapy: The TOWIE star revealed last year that she decided to seek treatment for her eyelash-pulling when her daughter Rosie, three, started copying her (also pictured with son Paul, five)

Discussing how her stepdad’s prison time influenced her at a young age, Sam said: ‘From the age of eight was when my mum discovered I was picking out my eyelashes. It became a habit, I still haven’t stopped.

‘It started when I was eight and I friend of ours said to me if you pick out an eyelash, make a wish and it’ll come true. As a young girl it’s a fairytale.

‘In recent years, I’ve seen a psychologist who specialises in Trichotillomania. The story goes deeper. They take it all the way back to your childhood.

‘When I was younger my [step]dad went to prison. I was picking out an eyelash and making a wish for him to come home.’

Sam admitted that her confidence took a plunge as a teenager until she discovered false eyelashes, which she wears to cover up her lack of natural lashes. 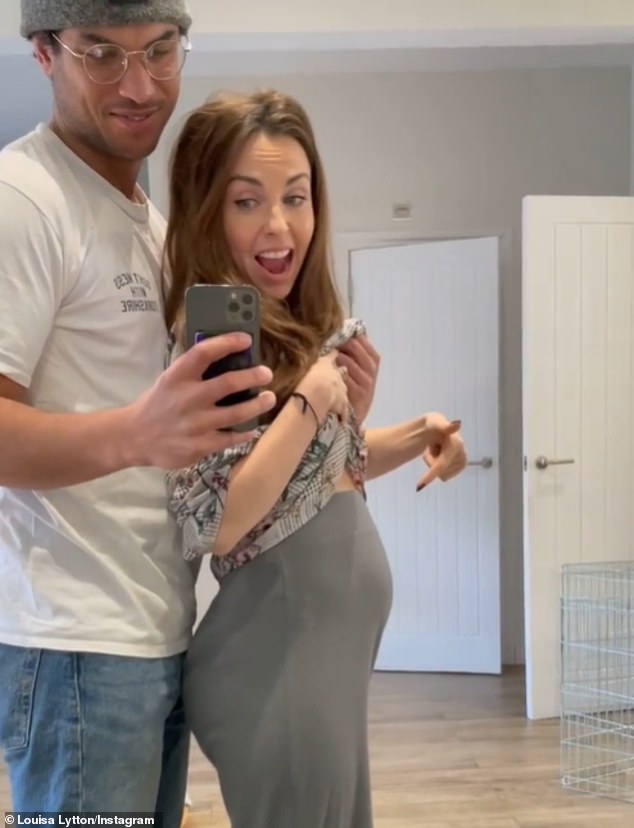 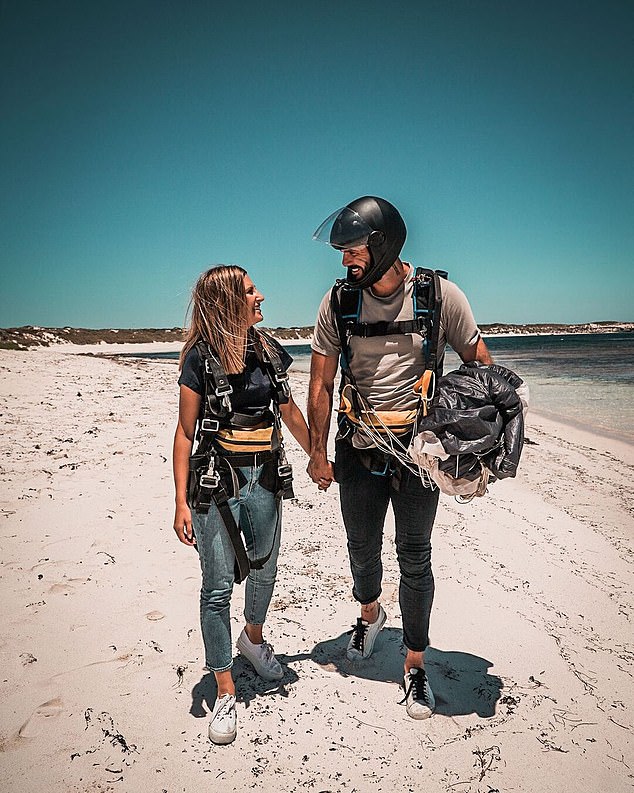 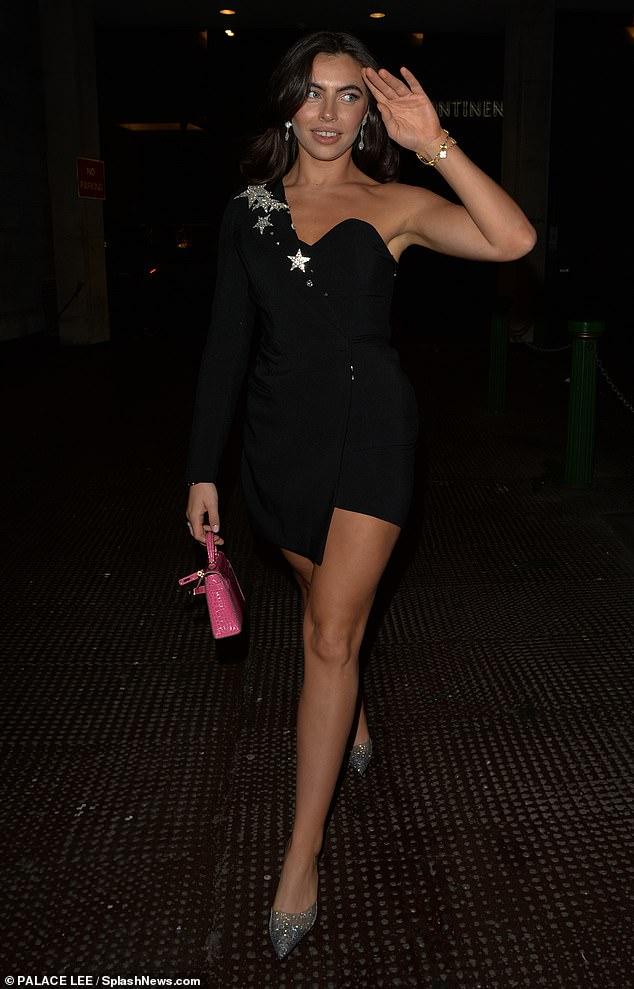 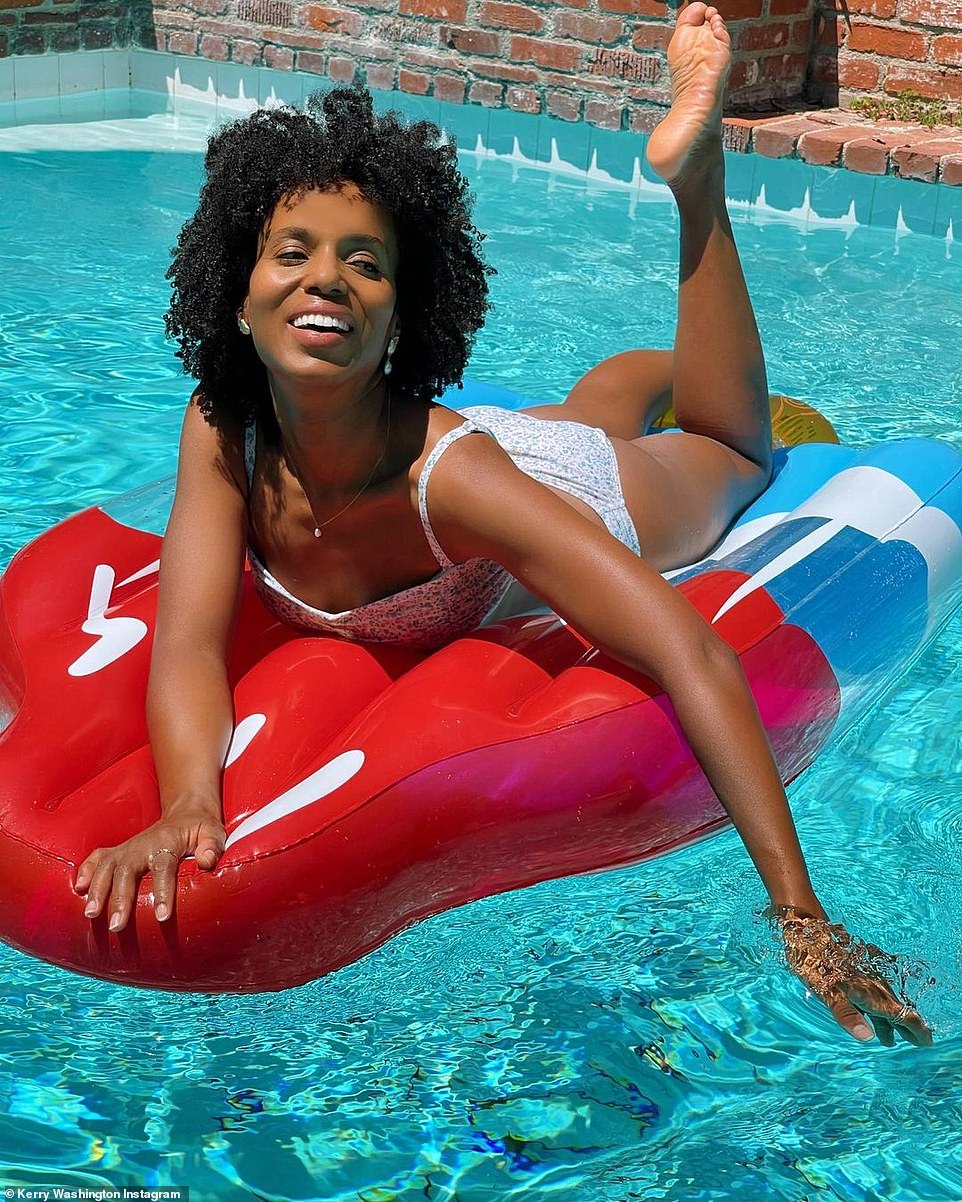 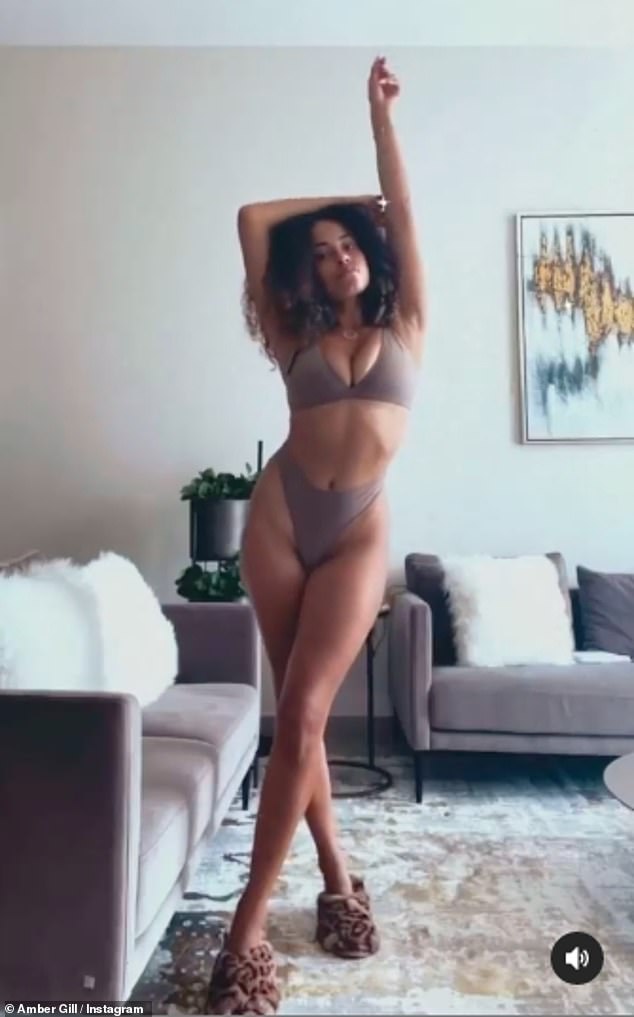 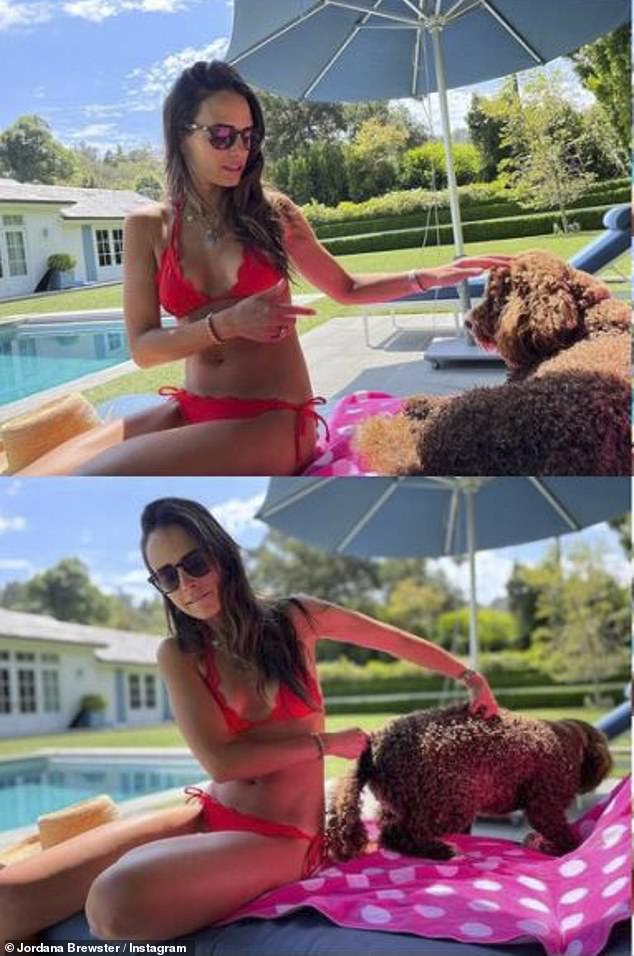 Jordana Brewster shows off her fit figure in a red bikini by her pool. 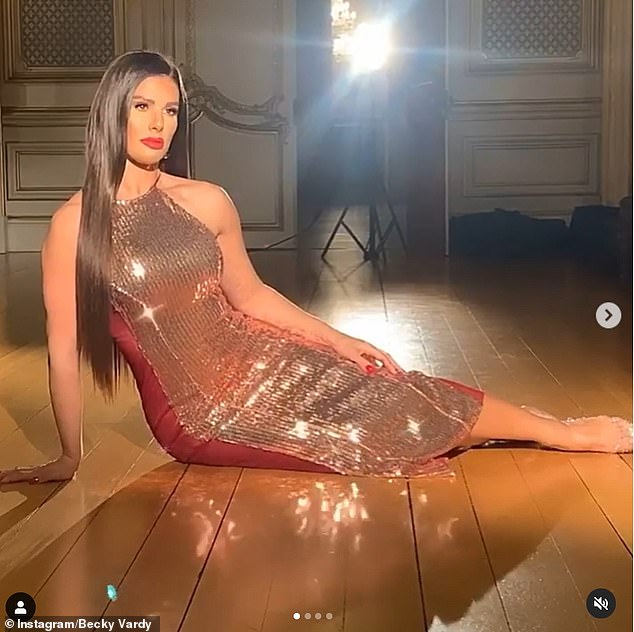 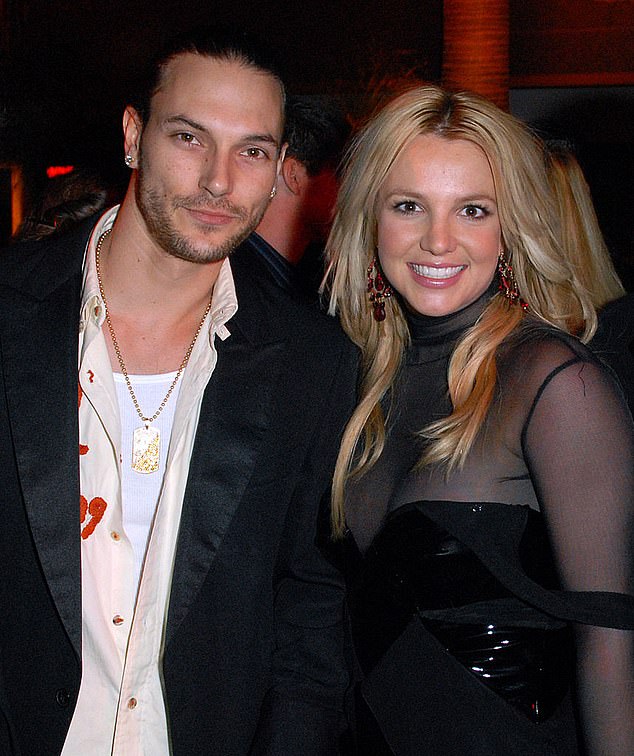