Israel has leaped ahead in the global vaccine race by squeezing every last dose out of its vaccine supplies and using its efficient health system to launch a 24/7 immunisation drive with military help – with making himself as visible as possible as he bids for re-election in March.

Some 1.4million Israelis have already had a dose of the /BioNTech jab, with nearly a sixth of the 8.7million population immunised against Covid-19 in less than three weeks.

Nearly 146,000 people received the jab on Monday alone – more than some Western countries including Italy, Spain and have distributed in total – with jabs being given out in sports arenas and military reservists being drafted in to help. 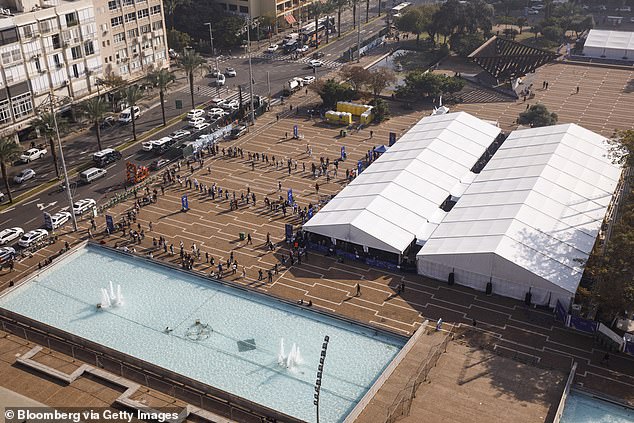 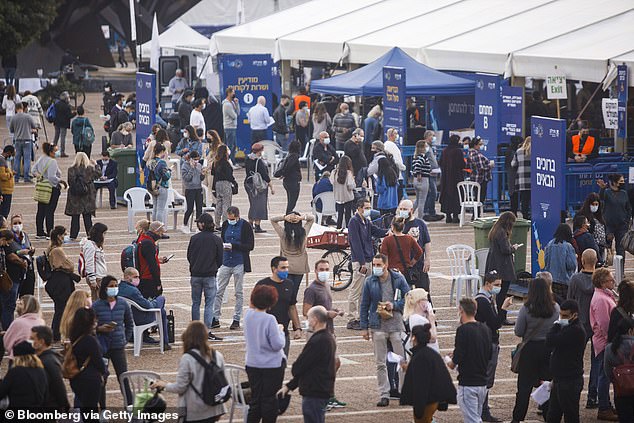 While only Pfizer/BioNTech vaccines have been used so far, Israel has also had deals in place with Moderna and since before any of the jabs were approved.

It has also divided up its vaccine stocks to get them to remote areas, and some of its health workers have even extracted extra doses from the vials they receive.

In addition, Israelis have been promised digital ‘green passports’ allowing them to sidestep certain lockdown rules once they receive both doses.

Health ministry director-general Hezi Levy said that around a fifth of Israel’s population would have had both shots by the end of this month.

‘By the end of January, we shall have inoculated two million residents, most of them elderly,’ he said. 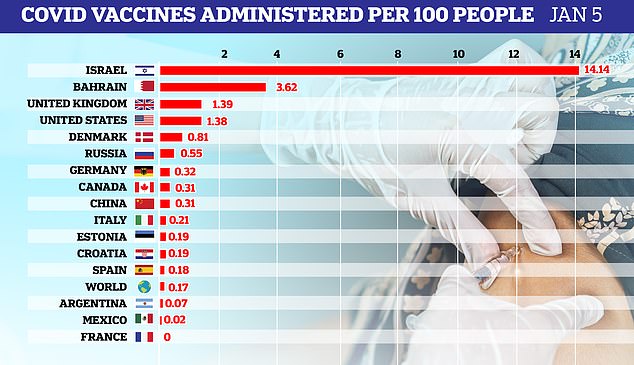 World leader: Israel has already given a first dose to nearly 1.4million of its 8.7million population, and plans to have a fifth of its people fully vaccinated by the end of January. The rapid rollout contrasts with the delays that have hampered the process in Europe and the US

THRIFTY USE OF SUPPLIES

Israel’s health ministry says it is dividing up its Pfizer/BioNTech shipments so that small batches can be sent to remote parts of the country.

Some nurses have managed to increase efficiency by extracting six doses from each vial rather than the advertised five, health minister Yuli Edelstein says.

To avoid waste, some people outside of the vulnerable target groups have been vaccinated anyway after walking into a clinic and receiving spare doses that would otherwise have had to be thrown away.

Many of them are younger people who are vaccinated, despite their lower risk level, at the end of the day to stop extra doses going to waste. 100,000 Israelis between the ages of 20 and 40 have been inoculated.

By contrast, the rollout in Europe and America has been hampered by blunders requiring some of the Pfizer vaccine stocks to be discarded.

Unlike Britain, Israel has stuck to the two-dose regime – meaning that more than a million people will have received their full double dosage by the end of January. 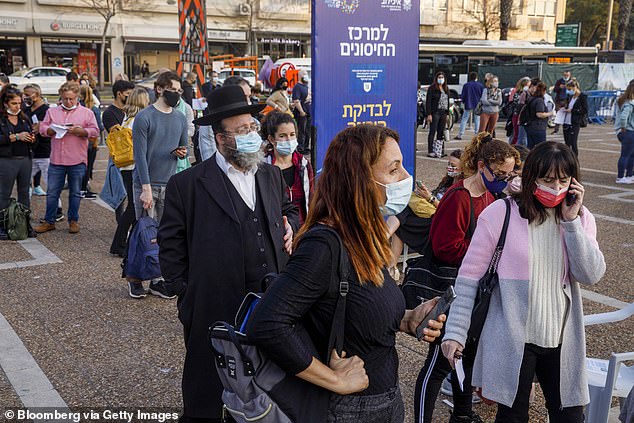 Israel ordered stocks of all three vaccines used in the West – Pfizer/BioNTech, Moderna and Oxford/AstraZeneca – before any of them had been formally approved.

A deal with Moderna was signed as far back as June, before the critical Phase III trials had even begun. By contrast, Britain will not get any Moderna shots until the spring.

Pfizer signed a deal for eight million vaccines – enough to cover half the population by themselves – on November 13, only days after announcing its trial results.

The following week, Israel reached an understanding with AstraZeneca for 10million doses of the Oxford jab.

Health minister Edelstein said Israel had been an ‘early bird’ in negotiating with pharmaceutical firms. ‘We are leading the world race thanks to our early preparations,’ he told the .

Israel has also been included in an EU deal for AstraZeneca vaccines, a partnership championed by Germany out of a sense of historical responsibility to the country. 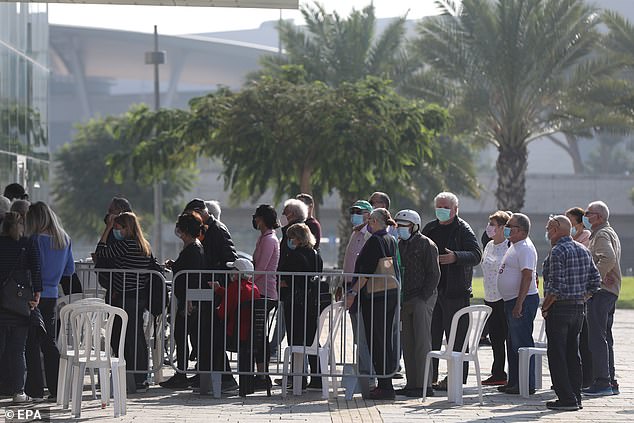 Waiting in line: Israelis queue up to get the first dose of their vaccine at the Heichal Shlomo Sports Arena in Tel Aviv, which was turned into a massive immunisation centre 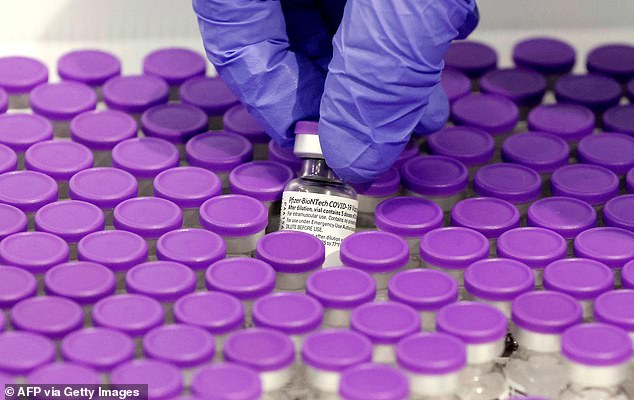 Supplies: A healthcare worker in Israel picks up a vial of the Pfizer/BioNTech vaccine at a centre opened by Tel Aviv authorities

Israelis are required to sign up to one of four competing but not-for-profit healthcare providers, and the health system is regarded as providing high-quality data.

That made it an attractive place for the pharmaceutical firms to do business, Israeli officials believe, and helped to speed up the rollout.

In 2020’s Bloomberg Health Efficiency Index, Israel came fifth in the world, behind only Singapore, Hong Kong, Taiwan and South Korea. Israel’s life expectancy, at 83, is also one of the highest in the world.

During the vaccine rollout, Israel’s health minister has ordered a 24/7 inoculation drive while a Jerusalem sports arena has been used to deliver some of the jabs.

As the vaccination campaign began, Israel announced that it had asked Facebook to take down four pages that were spreading anti-vaccine content.

The fake news included spurious claims that vaccines would be used to plant chips in people’s bodies, poison them or subject them to medical experiments.

The US firm confirmed that four Hebrew-language groups had been taken down as part of a policy against ‘spreading misinformation regarding the vaccines’.

Israel’s long-serving prime minister Benjamin Netanyahu is up for re-election in March as the country goes to the polls for a fourth time in two years.

Although mired in corruption charges and years of political stalemate, Netanyahu hopes to ride the success of the vaccine programme to victory in the election.

After three lockdowns, Netanyahu said last month that the vaccination programme could allow the country to emerge from the pandemic as early as February.

‘We can emerge from the coronavirus, open the economy and do things that no country can do,’ he has said.

He has also put himself in the public eye more than some world leaders – taking the country’s first jab himself and meeting the millionth vaccine recipient on January 1. 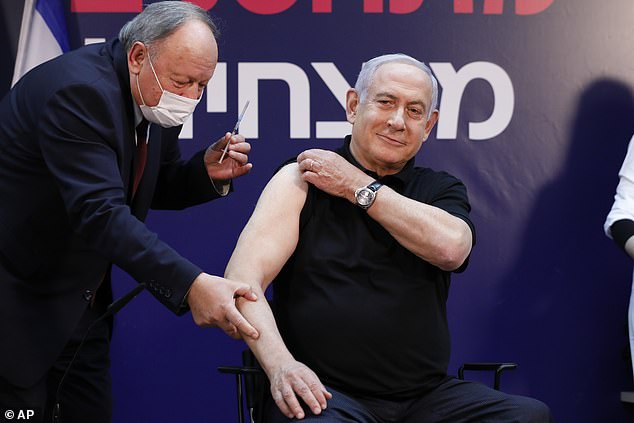 Israel’s prime minister Benjamin Netanyahu has kept himself in the public eye during the rollout, becoming the first person in the country to get the jab on December 19 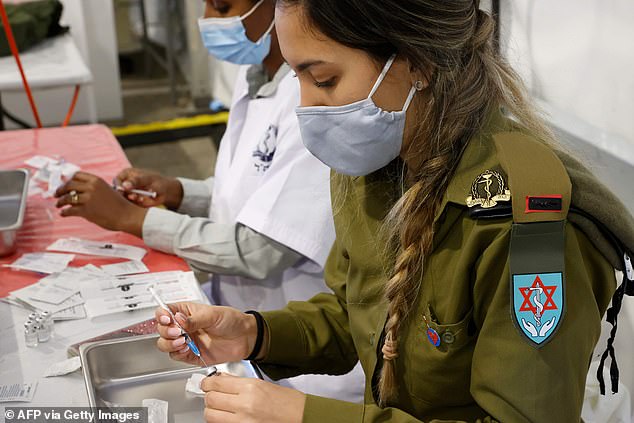 Long surrounded by enemies, Israel prides itself on self-reliance, an idea championed by Netanyahu since his first term as PM in the 1990s.

‘It’s really being treated like a war and Israel is experienced in battles,’ as infectious disease expert Allon Moses put it.

Around 700 military reservists have been drafted in to help with the vaccination effort ‘in order to make the operation more efficient’, the armed forces say.

The Israel Defense Forces are also planning to dish out vaccinations among their own ranks through a medical corps receiving supplies from the government.

Israel is preparing to launch a so-called ‘green passport’ scheme which means people immunised against Covid-19 will be exempt from some Covid restrictions.

Once they get two doses, people will be able to register on an app and travel abroad without having to quarantine when they return.

Ministers say the scheme is meant to encourage public take-up of the vaccines, which may also allow people to visit sports and cultural venues, according to the .

By contrast, the UK government has played down suggestions that ‘immunity passports’ could be used to open up society. 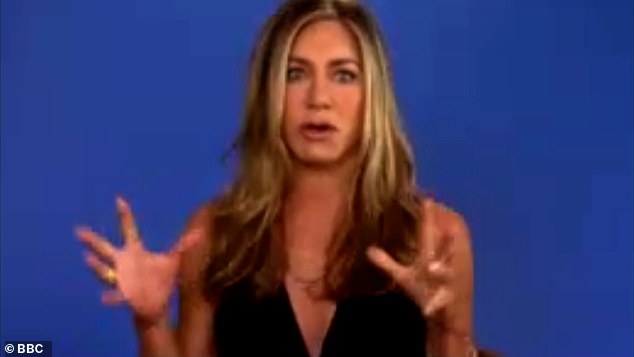 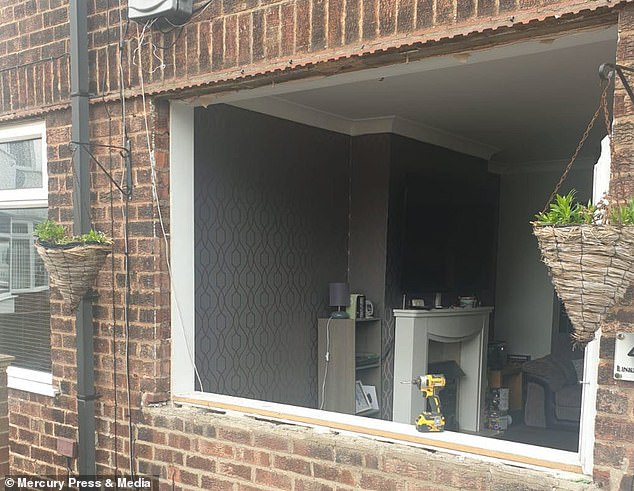 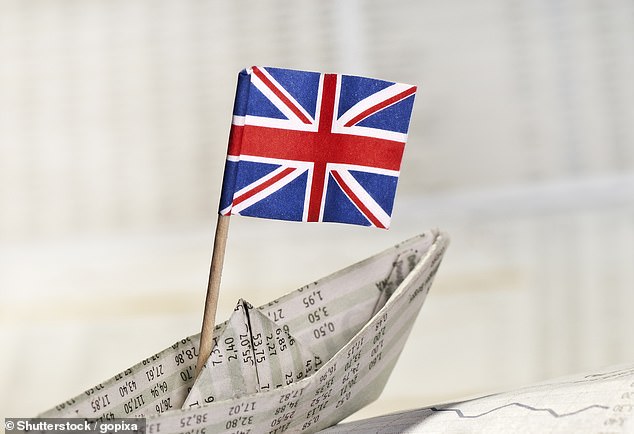 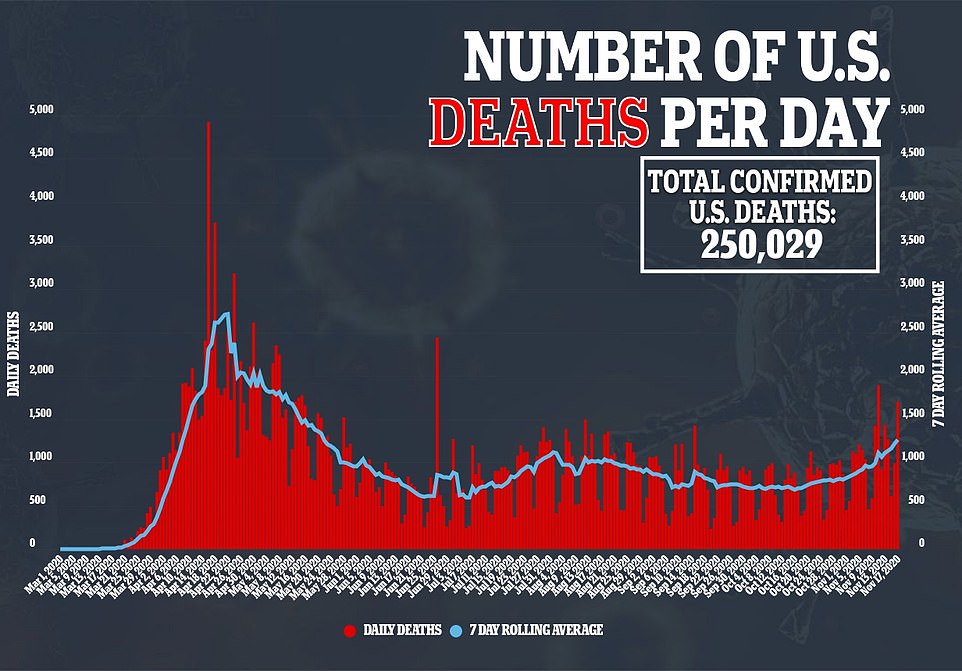 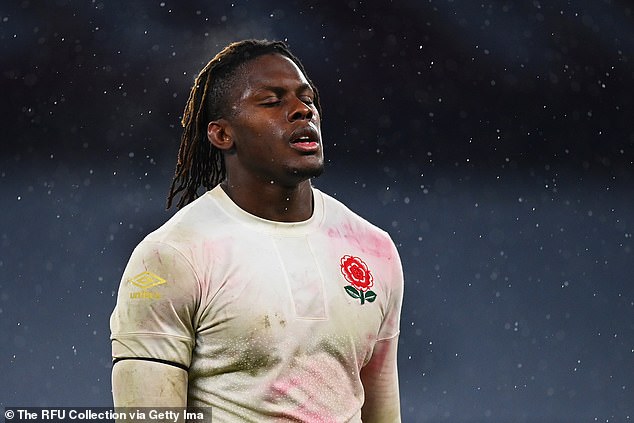 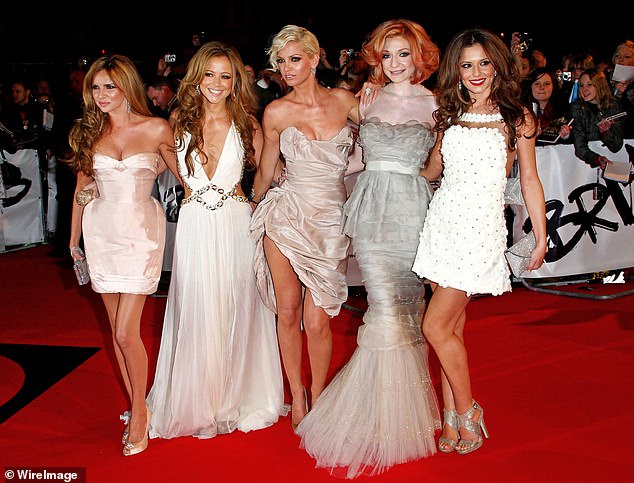 ALISON BOSHOFF: Despite her public persona, SARAH HARDING felt she was the ugly duckling 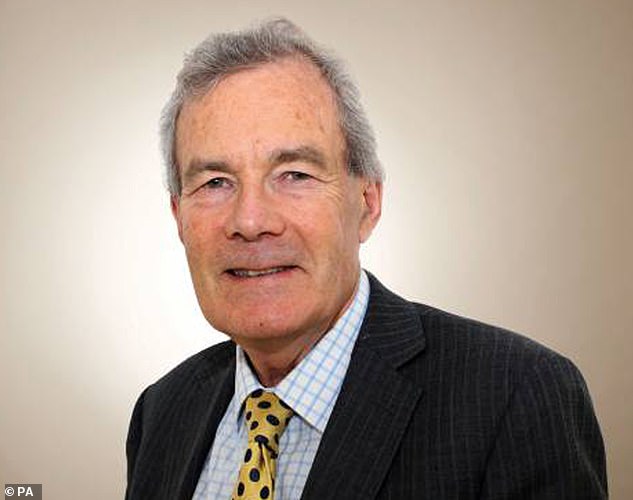