Supermarket websites have been feeling the strain as customers race to book delivery slots after England was plunged into its third national .

The Sainsbury’s app was under such high demand that the retailer had to temporarily limit access, while there were nearly 15,000 people queuing on the Ocado website and others were reporting problems paying on the  app.

Shoppers at some supermarkets saw empty shelves last night and today, although chains insisted they had good availability and regular deliveries to their stores.

It follows chaos before the first lockdown in March when customers started panic buying items such as toilet roll despite supermarkets urging people to be sensible.

Mother-of-three Lucy Margolis tweeted: ‘A perfect summary of this evening: Joining the Ocado virtual queue at position number 4,864, waiting half an hour to enter, and then being completely unable remember what I wanted to add to my shop.’

David Ford from Fleet, Hampshire, said: ‘Just tried to log onto Ocado to modify my weekly show and the app says I am 3,671 in the queue.’

And Mark Robinson wrote: ‘The only thing increasing more exponentially than Covid cases is the queue on the Ocado website this evening.’

Another shopper, Carol Walker from Wiltshire, said: ‘Yesterday afternoon I booked an Ocado internet shop – the earliest slot I could get was Friday, January 19.

‘I had already tried Waitrose and they had no slots at all for the next two weeks – their website asked shoppers to book a slot but then each page showing dates revealed everyone was full.

‘I did my Ocado shop online last night before Boris spoke, then later that evening, an hour or so after the Government announcement, I wanted to add a couple of things to my list.

‘I went into the website and got a message telling me ‘you are in a virtual queue – you are 575 in the queue’. Not surprisingly I gave up and am hoping I will be able to update my shopping in a few days, however I am not holding my breath after the way Ocado’s site completely crashed for weeks during the first lockdown.’

Kirill Korolyov tweeted a screenshot of empty Sainsbury’s delivery slots up until January 12, saying: ‘I have Covid. How am I supposed to eat if there’s no grocery delivery for a week, Sainsbury’s?’

Janiede Lang posted a screenshot of nine substitute items on her order with Sainsbury’s, tweeting: ‘Sainsbury’s. This is unacceptable, especially in these difficult times. Never had so many subs from other supermarkets.’

Problems were also reported on the Tesco app, with Nicola Barrett saying: ‘Tesco. I’m unable to check out my order for tomorrow.. app keeps freezing at the final saving changes… Help!’

It comes as data revealed today that Britons forked out £11.7billion in supermarkets throughout December in what was the sector’s busiest month on record.

Ocado issued a series of responses to customers online, telling one: ‘I’m really sorry to hear you’re having trouble finding a slot. Despite increasing our capacity by 40 per cent this year, slots are being snapped up quickly. We are still updating our website on a daily basis to show our availability.’

In another response to someone complaining about the queue, it said: ‘We’re sorry for any issues you may have experienced whilst using our service. Our queuing system is there to ensure a smooth and seamless experience whilst managing demand.’

Sainsbury’s insisted it had good availability and regular deliveries to its stores, so it encouraged customers to shop as normal.

A spokesman said: ‘We continue to prioritise vulnerable customers for our home delivery service and we have more than doubled the number of slots available to our customers since this time last year. Now we can deliver groceries to over 800,000 customers every week.’

Tesco said there had been no reports from its technical team of any problems on its website, and that it had increased the number of slots for online delivery.

Meanwhile, new data on supermarkets from Kantar revealed the record December helped sales jump 11.4 per cent to £32.7billion over the 12 weeks to December 27.

Supermarket trading was boosted by the £4billion that would normally have been spent on food and drink outside the home over the Christmas season.

The report showed online grocery sales accounted for 12.6 per cent of total spend in December, compared with 7.4 per cent in 2019.

Ocado ended the year as the country’s fastest growing retailer. 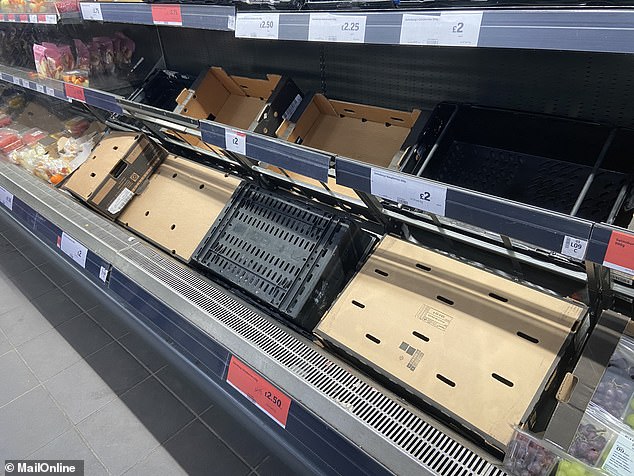 Empty shelves at a Sainsbury’s store in St Phillips, Bristol, are pictured this morning

Some prepared veg options were unavailable at a Sainsbury’s store in St Phillips, Bristol, today

Some baskets at a Sainsbury’s in St Phillips, Bristol, were empty when photographed today

Fraser McKevitt, head of retail and consumer insight at Kantar, said: ‘December is always an incredibly busy time for supermarkets, but take-home grocery shopping is usually supplemented by celebrations in restaurants, pubs and bars – with £4 billion spent on food and drink, excluding alcohol, out of the home during the normal festive month.

‘This year, almost all those meals were eaten at home and retailers stepped up monumentally to meet the surge in demand.’

He added that the port disruption ahead of the Brexit deal deadline meant shoppers brought forward their Christmas shopping, with Monday December 21 the busiest shopping day of the year.

New data on supermarkets from Kantar this morning revealed the record December helped sales jump 11.4 per cent. The latest grocery market share is displayed in the graphic above

‘Fifteen million households – more than half the entire population – visited a grocer at some point that day and spent a collective £819 million,’ he said.

‘This is a real step change from recent years when consumers have typically completed their ‘big shop’ closer to Christmas Day.’

Morrisons was the best performer of Britain’s big four grocers with sales up 13.1 per cent year-on-year over the 12 weeks. Its market share moved up by 0.1 percentage points to 10.4 per cent, its highest level since June 2019.

Kantar said grocery inflation was 1.3 per cent for the 12-week period, with prices rising fastest in markets such as canned coke, fresh pork and chilled deserts while falling in vegetables, fresh beef and bread. 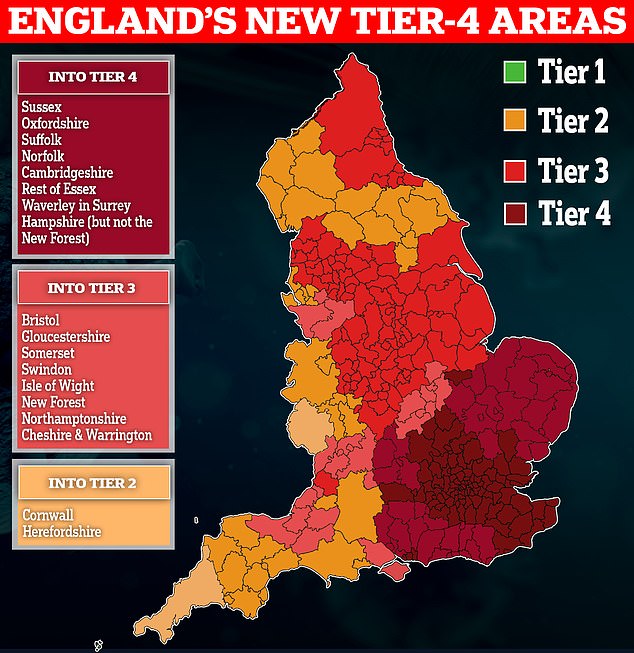 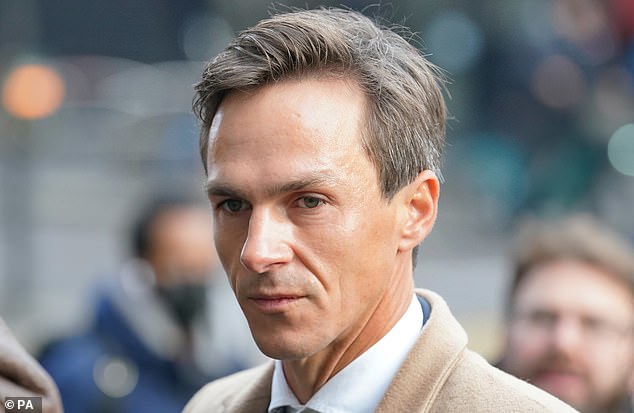 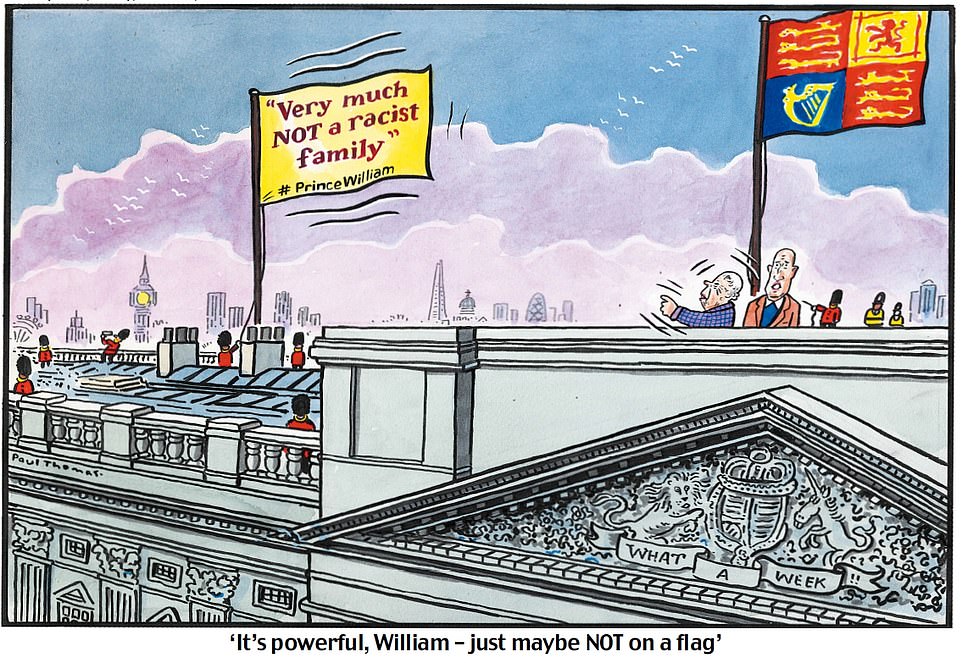 PAUL THOMAS on… Wills fighting back 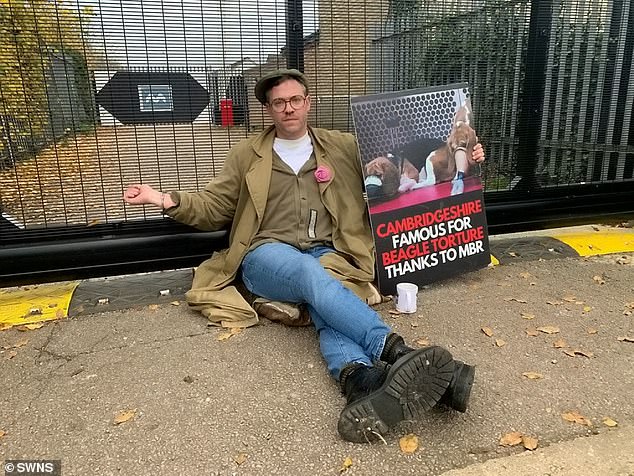 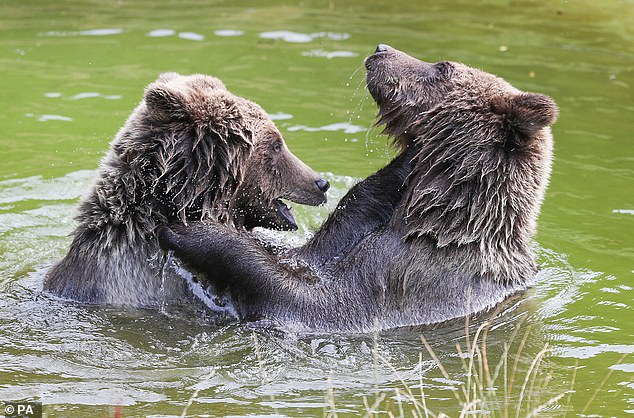 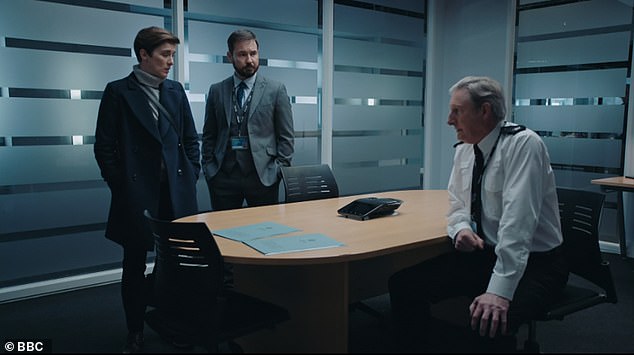 Line Of Duty: An eye-watering 12.8 MILLION viewers tune in 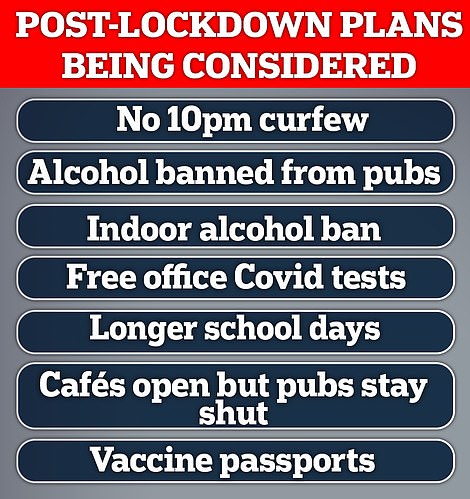