has broken his silence over the huge suspected Russian cyber attack claiming that China could be behind the attack, despite Secretary of State Mike Pompeo publicly blaming Russia the day before.

The president tweeted Saturday just before noon to downplay the hack which has compromised broad swathes of the federal government and private sector and has been described as the cyber equivalent of the attack on Pearl Harbor.

Trump brushed off the hack claiming it ‘is far greater in the Fake News Media than in actuality’ and insisted that ‘everything is well under control’.

He also once again pushed unfounded claims of widespread fraud in the presidential election, saying that voting machines could have been hacked.

Trump posted this Christmas card photo on Friday with First Lady Melania. He broke his silence over the suspected Russian cyber attack claiming it ‘is far greater in the Fake News Media than in actuality’ and ‘everything is well under control’ 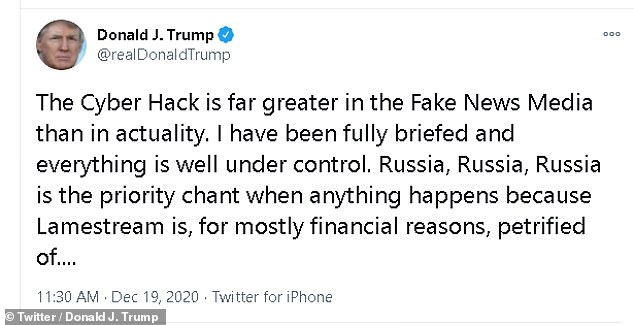 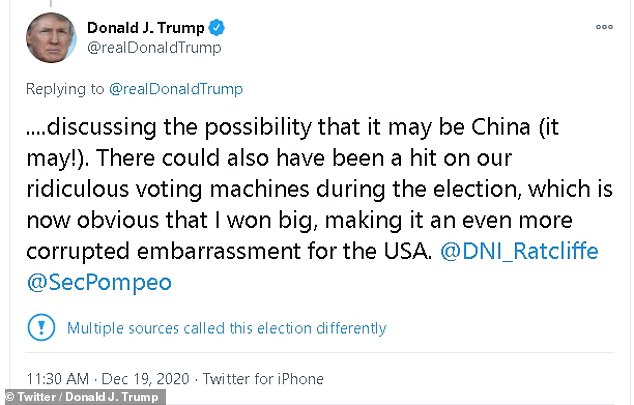 Trump tweeted claiming that China could be behind the attack, despite Secretary of State Mike Pompeo publicly blaming Russia the day before

GOVT AGENCIES KNOWN TO HAVE BEEN TARGETED BY HACKERS SO FAR

‘The Cyber Hack is far greater in the Fake News Media than in actuality. I have been fully briefed and everything is well under control,’ he tweeted.

‘, Russia, Russia is the priority chant when anything happens because Lamestream is, for mostly financial reasons, petrified of discussing the possibility that it may be (it may!).’

He continued in a follow-up tweet: ‘There could also have been a hit on our ridiculous voting machines during the election, which is now obvious that I won big, making it an even more corrupted embarrassment for the USA. @DNI_Ratcliffe @SecPompeo.’

Twitter marked the second tweet with a warning stating that ‘Election officials have certified Joe Biden as the winner of the U.S. Presidential election.’

His comments come just hours after Pompeo became the first US official to publicly attribute the massive hacking campaign to Russia.

‘There was a significant effort to use a piece of third-party software to essentially embed code inside of US government systems,’ Pompeo told The Mark Levin Show on Friday.

‘This was a very significant effort, and I think it’s the case that now we can say pretty clearly that it was the Russians that engaged in this activity.’

Russian President Vladimir Putin’s spokesman later denied Kremlin involvement, and the Russian embassy said in a statement that the country ‘does not conduct offensive operations in the cyber domain.’

The sprawling attack, which went undetected for nearly nine months, compromised the Departments of Homeland Security, Justice, Treasury, State and Energy, as well as a growing list of companies and local governments across the country.

Officials with the nation’s cybersecurity agency warn that the breach could be difficult to undo, saying the hackers ‘demonstrated sophistication and complex tradecraft’ and that it was likely that they had built additional secret backdoors while active inside the compromised networks.

Experts say there simply are not enough skilled threat-hunting teams to properly identify all the government and private-sector systems that may have been hacked, and warn infected networks may have to be ‘burned to the ground’ and rebuilt from scratch. 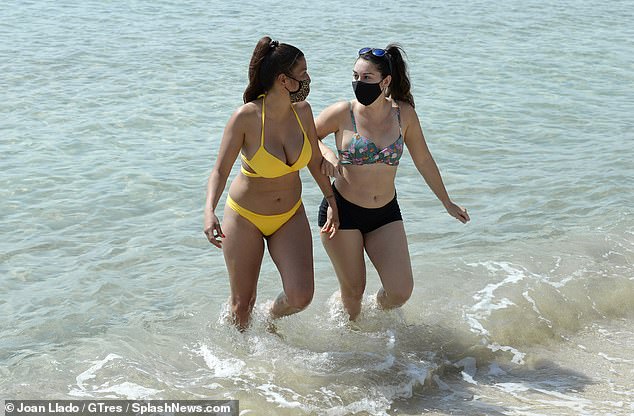 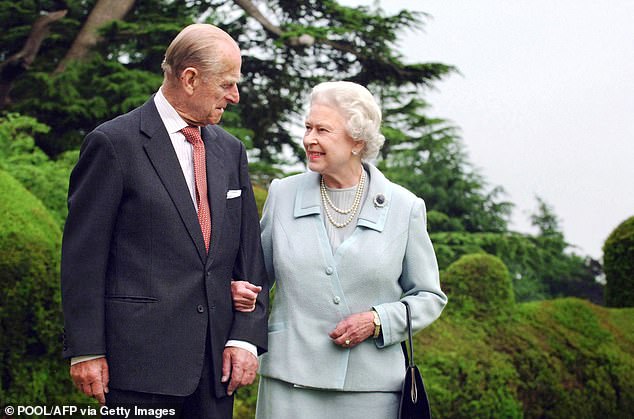 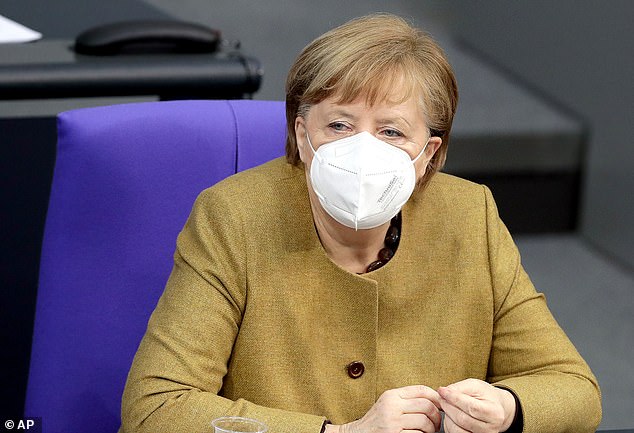 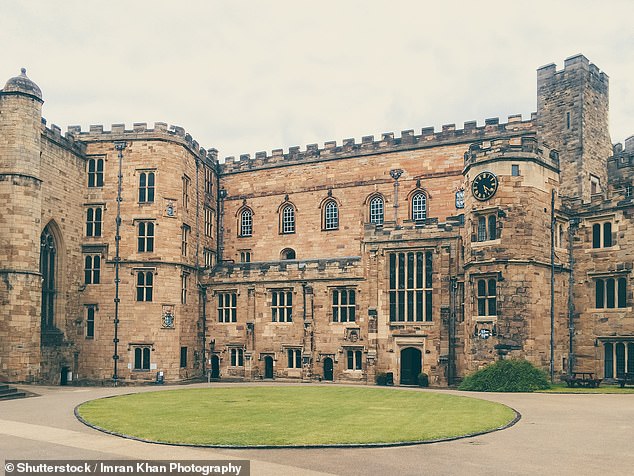 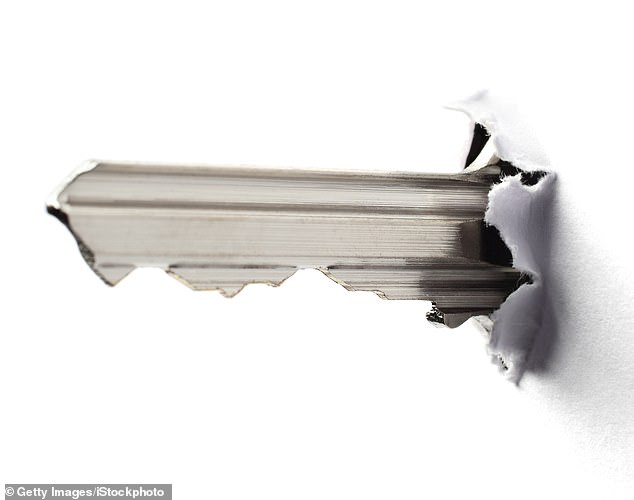 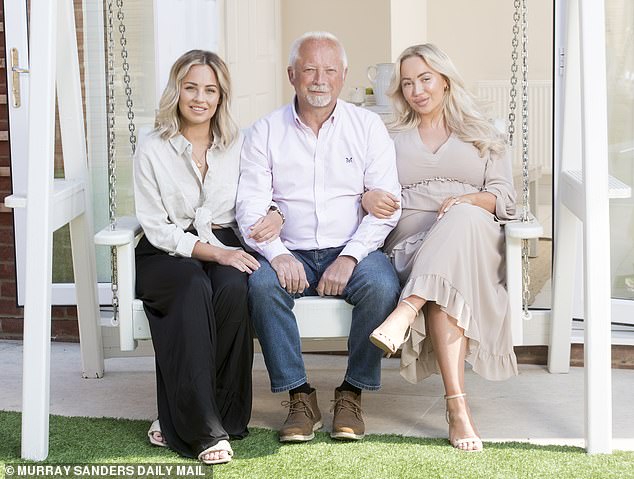 From privilege to penitentiary: One of the infamous ‘NatWest three’ opens up about US prison hell 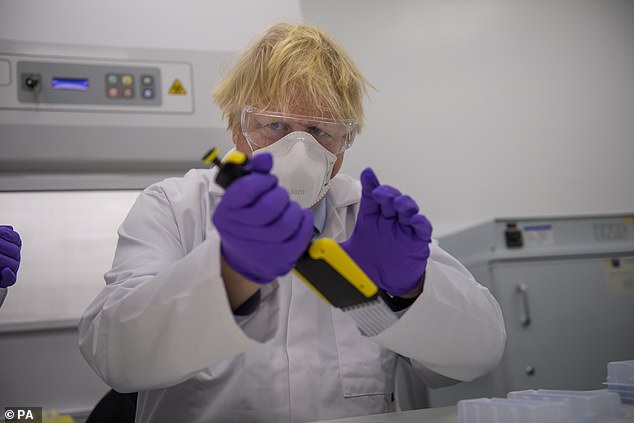