The parents of a seven-year-old girl stabbed to death on Mother’s Day have told of their loss at the ‘senseless death’ of their young daughter who was killed in a ‘violent and monstrous way’.

Paranoid schizophrenic Eltiona Skana, 30, used a craft knife to slash the neck of Emily Jones as she played on her scooter during a random attack in Queen’s Park, Bolton.

Emily had visited the park with her father Mark Jones and mother Sarah Barnes, who are separated, on March 22, this year.

In court today ahead of her killer’s sentencing, the grieving parents asked how an ‘innocent child playing in a park’ could be killed in ‘such a violent and monstrous way?’

In a victim impact statement read to Manchester’s Minshull Street Crown Court Emily’s parents said they couldn’t ‘put into words’ the loss of their only child, describing her as ‘the reason we got up every morning’.

They described Emily as a ‘loveable child, full of innocence and wonder’ and said they couldn’t enjoy life as ‘the biggest part’ had been taken away.

They said: ‘How can you put into words how you feel about the senseless death of your only child?

‘Emily was the beat in our hearts the spring in our steps and the reason we got up every morning.

‘Emily was our beautiful, spirited little girl. A bundle of energy with an infectious personality. Emily loved life and had not a care in the world.’ 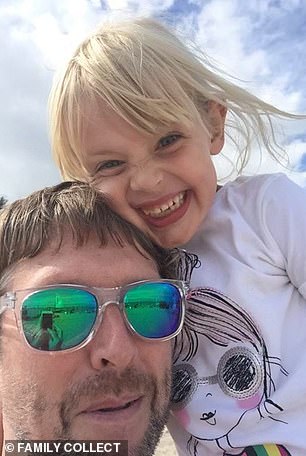 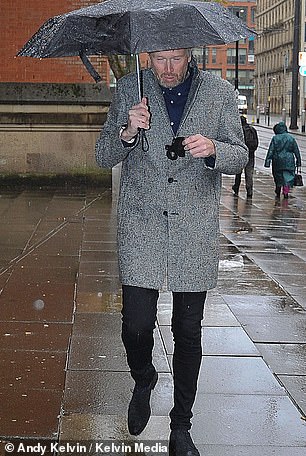 Emily Jones’s father Mark (right arriving at court today, and left with Emily) was in court as the family’s statement was read out. It told how the family can no longer ‘see the future’ after the ‘senseless death’ of the seven-year-old 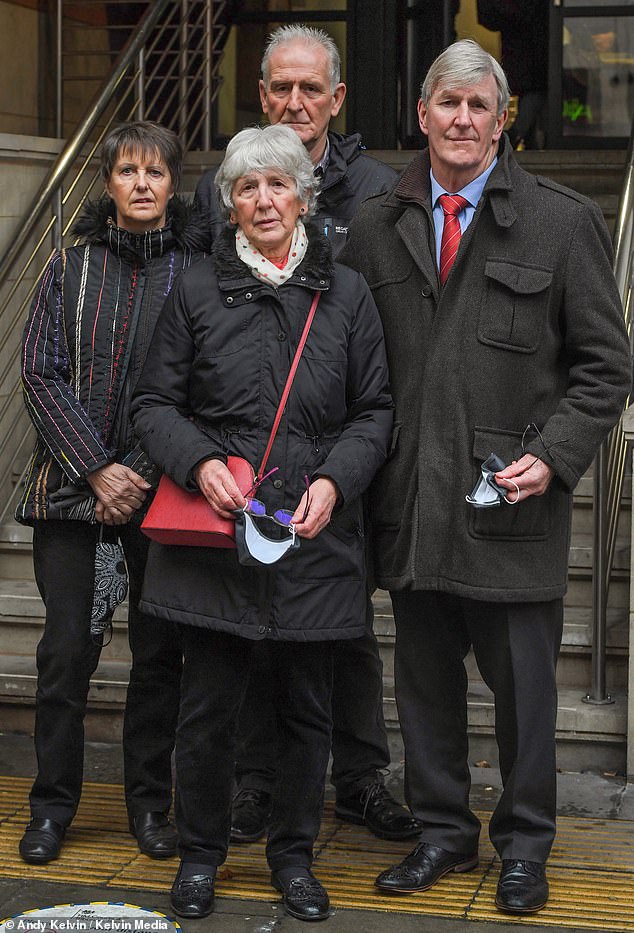 Emily’s grandparents (pictured front and right), the parents of Mark Jones also attended Minshull Street Crown Court with other friends of the family for the sentencing of  Eltiona Skana, 30

‘The last nine months have been spent in limbo,’ they added.

‘We cannot move at this time. We cannot see the future.

‘We can only focus on this day, it’s one day at a time. We cannot understand how this has happened.

‘We want people who are hearing this statement to understand this shouldn’t have happened.

‘How can an innocent child playing in a park be killed in a park in such a violent and monstrous way?’

Manchester’s Minshull Crown Court heard how Emily had spotted her mother, who was jogging around the park, and rode towards and called out to her.

But Emily’s route took her past Skana, who was sat on a bench and armed with a craft knife that was one of a pack of three she’d bought earlier that day.

Skana stood up as Emily went past on her scooter, grabbed her in a headlock and in ‘one movement slit her throat’ before throwing her to the ground.

During the attack, Skana, originally from Albania but who’s been living in the UK since 2014, screamed: ‘She tried to kill me.’

She then ran off but a passer-by was able to detain her until police arrived. 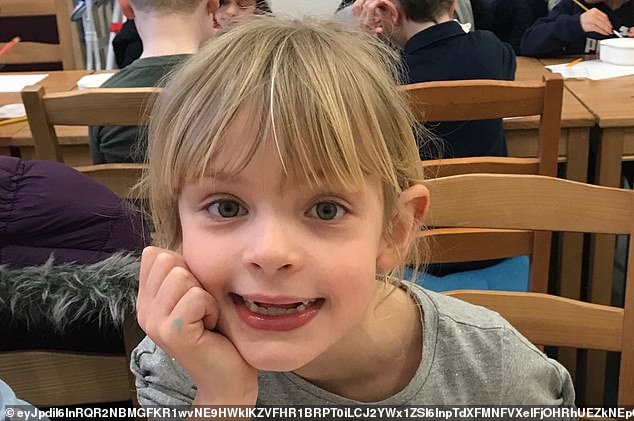 Manchester’s Minshull Crown Court heard how Emily (pictured) had spotted her mother, who was jogging around the park, and rode towards and called out to her

Skana had pleaded guilty manslaughter on the grounds of diminished responsibility but was charged with Emily’s murder.

On the seventh day of her trial, the jury was told the prosecution were discontinuing the case, with prosecutor Michael Brady QC claiming there was now no realistic prospect of a conviction.

Therefore, the judge Mr Justice Wall directed the jury to find Skana not guilty of murder.

The prosecution’s decision came after Dr John Crosby, a consultant psychiatrist, told the court that Skana had a partial defence to murder as she was suffering an abnormality of mental functioning which was likely to have substantially impaired rational judgement and her ability to exhibit self control.

He said she would perceived herself to be ‘under threat’ and was having a psychotic episode at the time of the killing.

Asked whether Skana could have selected to attack Emily, he said: ‘In my opinion it could have been anyone who came into contact with her at that point.

‘There is no evidence that Emily Jones was singled out for any particular reason.’

Other psychiatric experts had told the jury that Skana had a history of mental illness, was a paranoid schizophrenic and had killed Emily in a psychotic episode.

But the prosecution claimed she was using her health problems as an excuse and had planned to kill.

Skana had previously been detained in psychiatric hospitals three times in 2015, 2017 and 2018 but then deemed well enough to be released into the community. 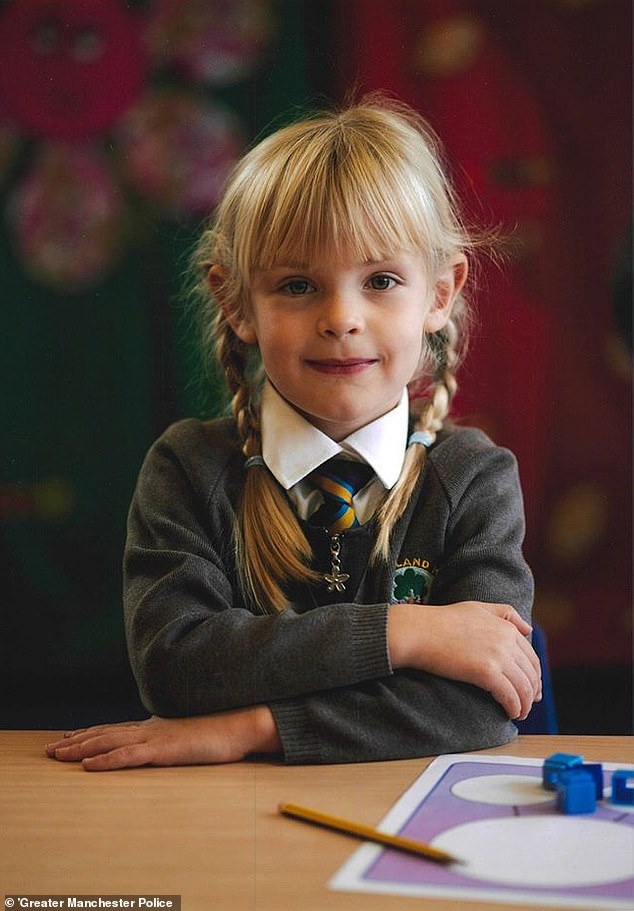 Emily’s route through the park towards her mother took her past Skana, who was sat on a bench and armed with a craft knife that was one of a pack of three she’d bought earlier that day

It followed incidents in which she’d stabbed her mother through the hand and hit her on the head with an iron and threatened her sister.

In a third incident, she’d gone to a friend’s house – possibly armed with a knife – and asked to see her 13-year-old daughter.

Skana was never prosecuted over any of the incidents.

Although Skana was refused asylum in 2018, she lodged an appeal and was given leave to remain in the UK until last month.

She’d claimed asylum on entering the UK in 2014 but three years later she told doctors that her claim to be a trafficking victim had been a lie.

Following Emily’s killing, she was detained under the Mental Health Act and admitted to Rampton Hospital.

When asked about the killing, she’d told one clinician: ‘It was premeditated, I waited in a park and picked my victims, I did what I did then tried to run away.’

But a consultant forensic psychiatrist treating Skana revealed the conversation took place at a time when she was not taking her medication and was therefore in the grip of psychosis.

Skana had blamed psychosis for Emily’s killing, saying she was ‘hearing voices on the day.’ 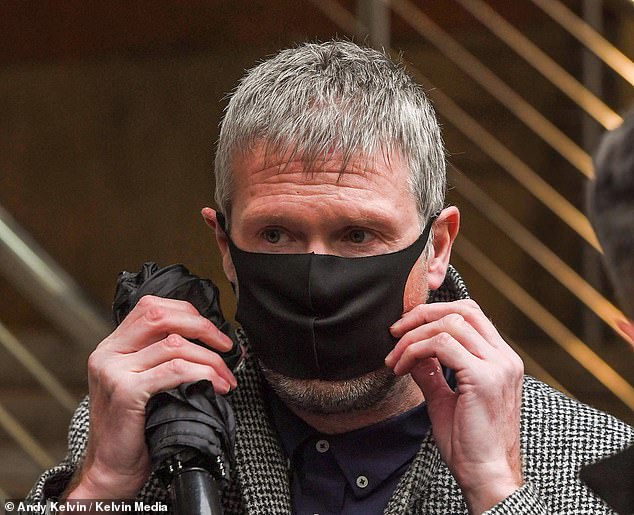 Mark Jones, pictured arriving at Minshull Street Crown Court today, was in court as the famiy’s victim impact statement was read out in court. The family described Emily as a ‘loveable child, full of innocence and wonder’ and said they couldn’t enjoy life as ‘the biggest part’ had been taken away

She also believed her mental illness was due to the treatment she’d received since arriving in the UK and told Dr Afghan she was ‘perfectly normal’ before then.

The court heard how she’d been having injections of anti-psychotic drugs each month since 2017.

Skana told medics this medication had caused her mental health to deteriorate and she began taking tablets instead of injections as they made her ‘less paranoid’.

But Dr Victoria Sullivan, who treated Skana at a medium secure mental health unit in Manchester after her arrest, said the defendant’s sister, Klestora, told them she had not been taking her anti-psychotic medication before the attack.

And when police raided her flat in Bolton after her arrest they found a stash of untaken, anti-psychotic drugs.

From mid-December of last year until March 11, Skana had no face-to-face contact with her mental health workers, the jury heard.

Emily’s father had initially believed she’d only fallen off her scooter and was being helped up. 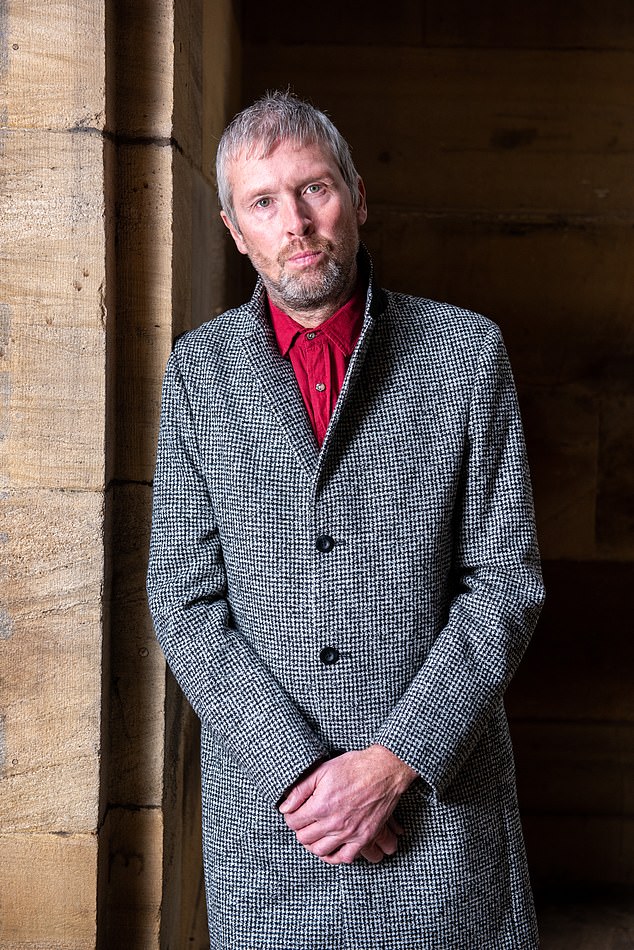 Emily’s father Mark had initially believed she’d only fallen off her scooter and was being helped up. But he cradled her and tried to comfort her after the attack

But he’d then heard a woman shout: ‘She’s been stabbed’.

Mr Jones saw Skana run off and when he went to Emily he saw she was bleeding from the neck and tried to comfort her.

A member of the public handed him his shirt to try and stem the flow of blood from Emily’s neck.

A woman, believed to be a trained nurse, took over first aid and by this stage Mr Jones was ‘frantic’.

Emily’s ‘inconsolable’ mother then arrived and they witnessed paramedics, who’d been called to scene, battle to try to save Emily.

But Emily had suffered a cardiac arrest and was airlifted to Salford Royal hospital, where was pronounced dead shortly before 4pm.

One witness had earlier seen a woman in the park – matching Skana’s description – with a ‘vacant’ look on her face and looking ‘agitated’.

Another had seen her stab Emily who’d held her throat as she was pushed to the ground.

Skana ran off but a brave passer-by, Tony Canty, caught up with her and knocked her to the ground.

He sat on her until police arrived and with Skana ‘babbling’ about ‘injections’, the ‘Home Office’ and ‘pigs’.

Skana also repeated, ‘She tried to kill me’ and claimed Mr Canty had killed Emily.

At the start of the sentencing hearing, the judge said he’d become aware of ‘two matters of concern’ that had raised ‘serious’ contempt of court issues.

The first was the publishing of details on social media of counsels’ contact details and he would be informing the Attorney General in due course.

The second was photographs, taken in court, of Skana and also published on social media and this matter is now being investigated by police. 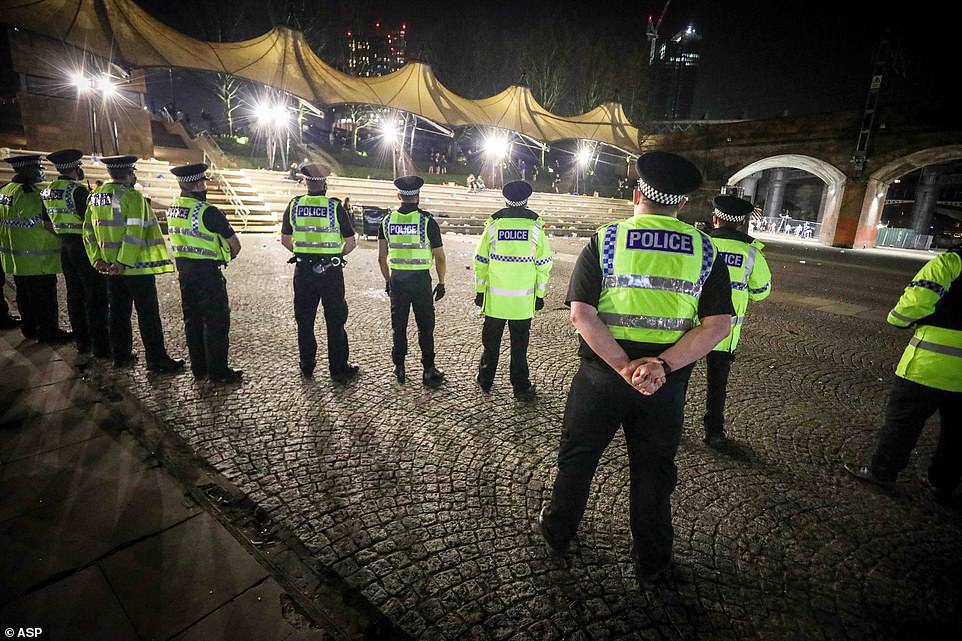 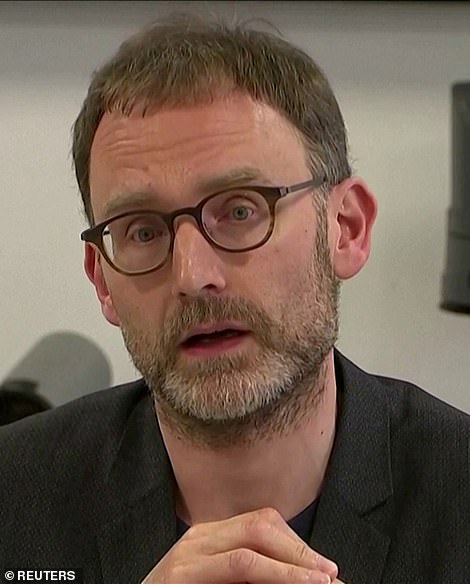 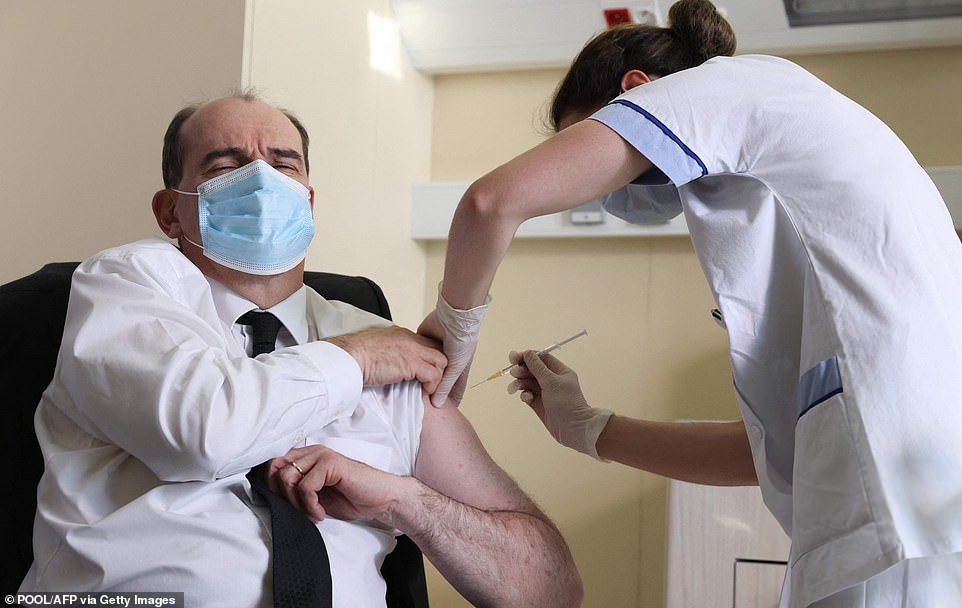 France declares only 55s and over should use AstraZeneca 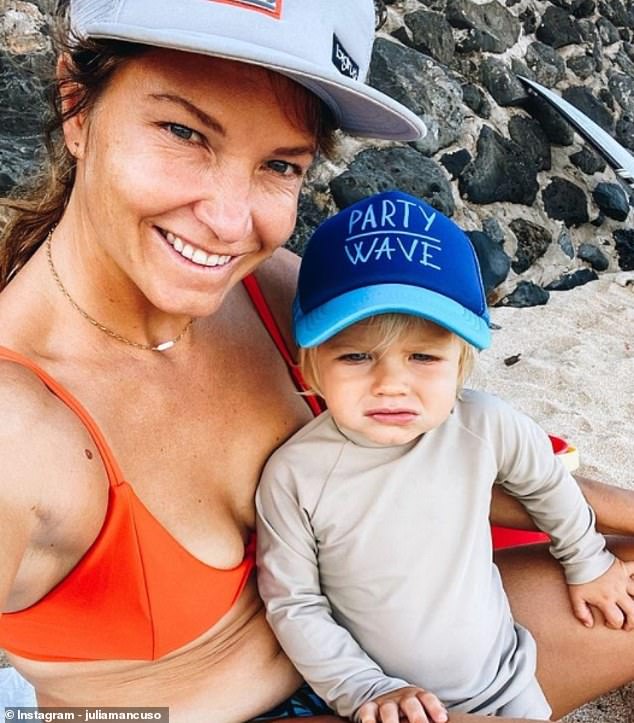 London and Liverpool go into Tier 2 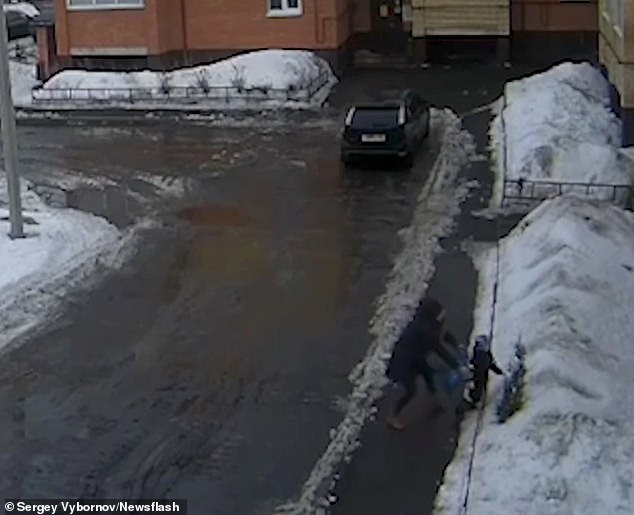