Governor on Monday told every hospital in New York to start recruiting retired doctors and nurses now before they become overwhelmed as he revealed that hospitalizations have gone up from 850 in June to 3,552 now – and new infections from have not yet revealed themselves.

An entire shutdown – what he calls New York Pause – will happen if the hospital system becomes overwhelmed, he said. At the height of the pandemic in New York, there were more than 18,000 people in the hospital.

Monday’s number of hospitalizations is the same as it was on March 23 but Cuomo said hospitals are better equipped to handle the crisis now. On Sunday, 54 people died across the state of New York. The statewide COVID-19 test positivity rate is now 4.57 percent.  Currently, the state is applying ‘yellow, red and orange’ zone rules to neighborhoods where there are surges.

A red zone – the most severe – closes schools and non-essential businesses but keeps some open. On Monday, Cuomo said that he’d add ‘PAUSE’ as the most severe set of rules. It’s unclear how it will differ from red zones.

Cuomo said on Monday he wants to act now to avoid that happening again so is telling every hospital to plan now to add 50 percent to its capacity to be able to add more beds in addition to finding more staffing.

He also revealed that 65 percent of all new infections are coming from small gatherings in homes. Thanksgiving infections will reveal themselves over the next ten days, he said.

Cuomo predicts that the situation is going to keep worsening until mid-January and that a vaccine won’t have any widespread effect until the end of spring. 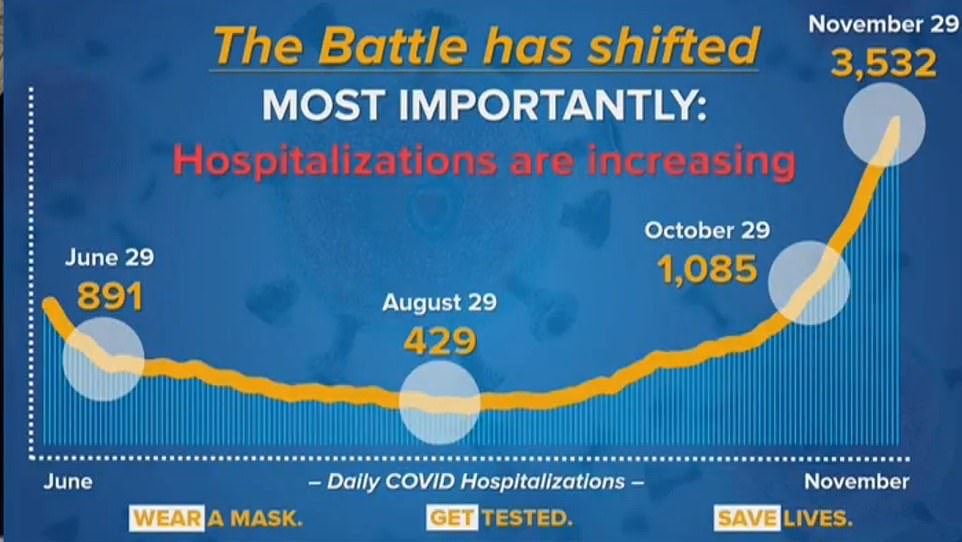 Cuomo is telling every hospital to plan now to add 50 percent to its capacity to be able to add more beds in addition to finding more staffing. 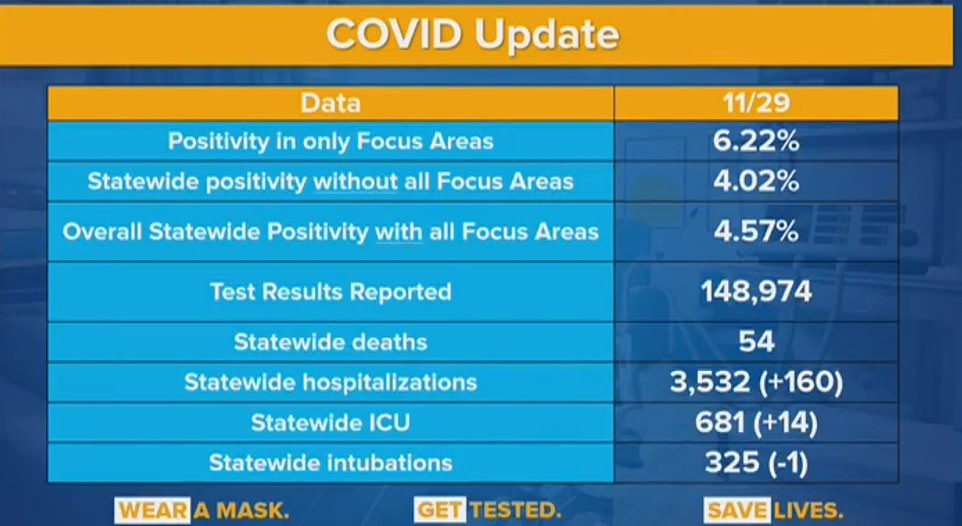 ‘We’re in for round two. With any luck, round two will not be round one. I’m just sorry that we have to go through it again.

‘We don’t know what the effect has been yet.  We are seeing the rise all across the state. The first go around it was primarily New York City. We had upstate resources we could share.

‘That is not the case this time- it is statewide.

‘Literally every region is dealing with a hospital issue now.Look at those curves they are all going up at an alarming rate,’ he said.

He is telling every hospital to plan now to add 50 percent to its capacity to be able to add more beds in addition to finding more staffing.

‘Every hospital has to identify retired nurses and doctors now – staff just gets exhausted. They’ve had a horrendous year..to now go through this again..’ he said. 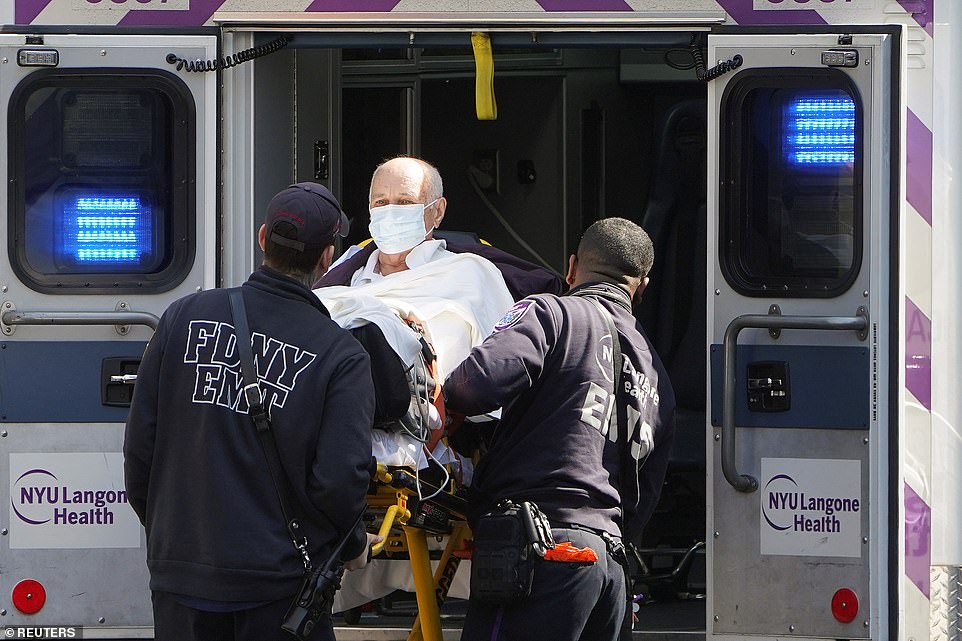 Paramedics wheel a patient into a hospital following the outbreak of coronavirus disease (COVID-19), in the Manhattan borough of New York City, New York, U.S., March 18, 2020. Hospitalizations are now the same number as they were on March 23 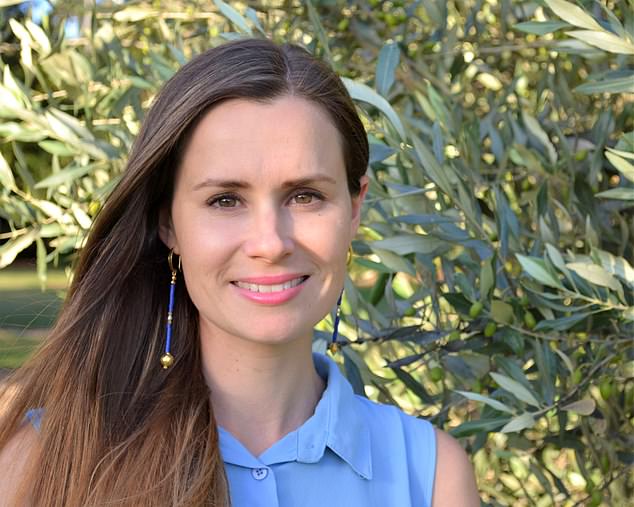 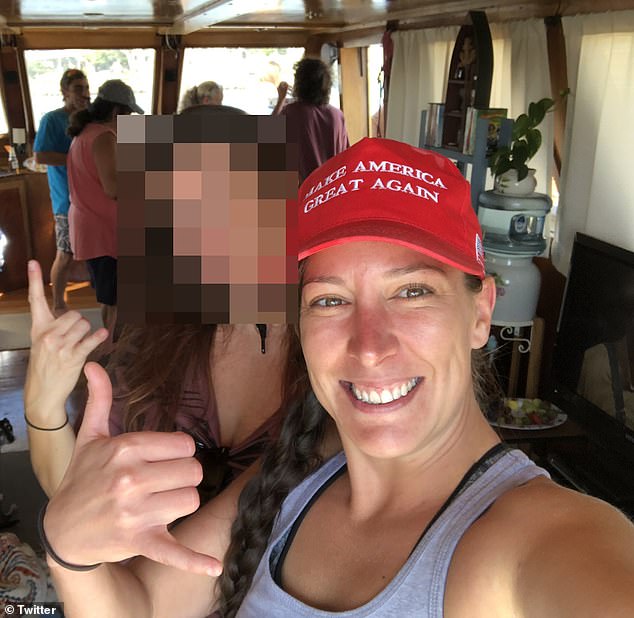 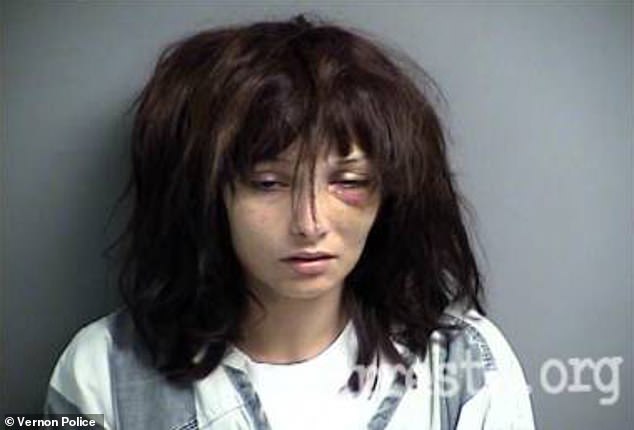 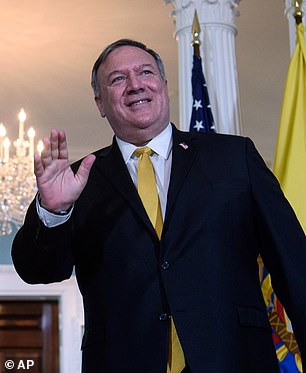 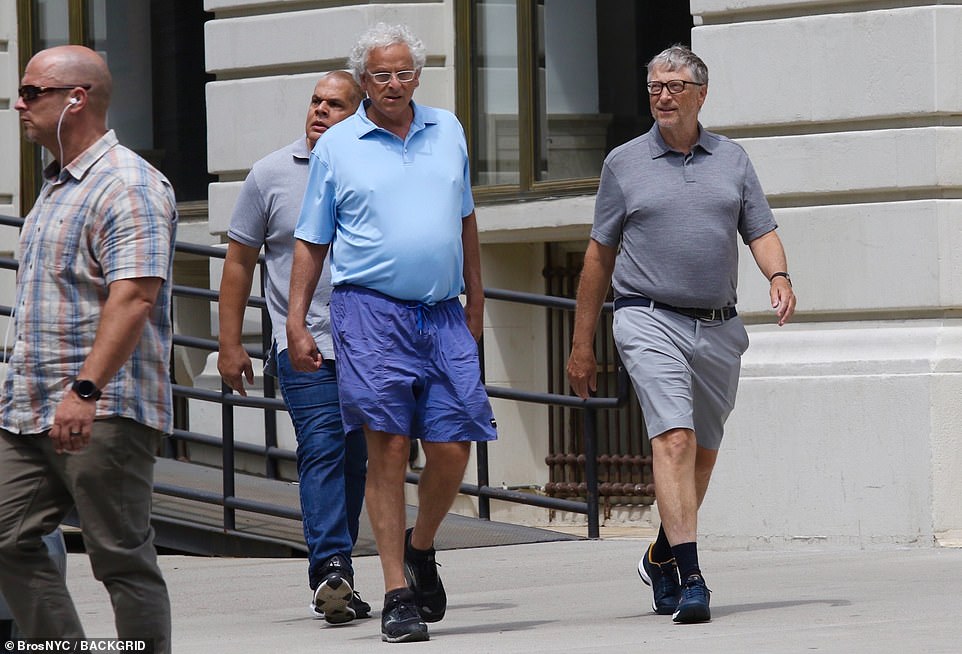 Bill Gates is spotted out in public for the first time 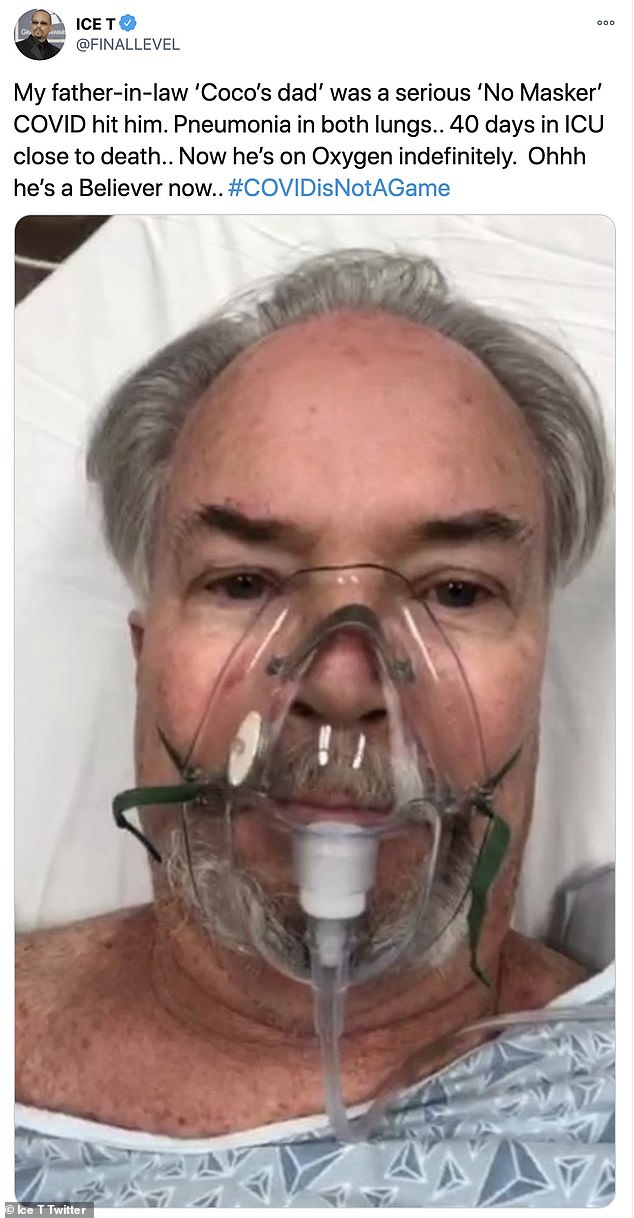 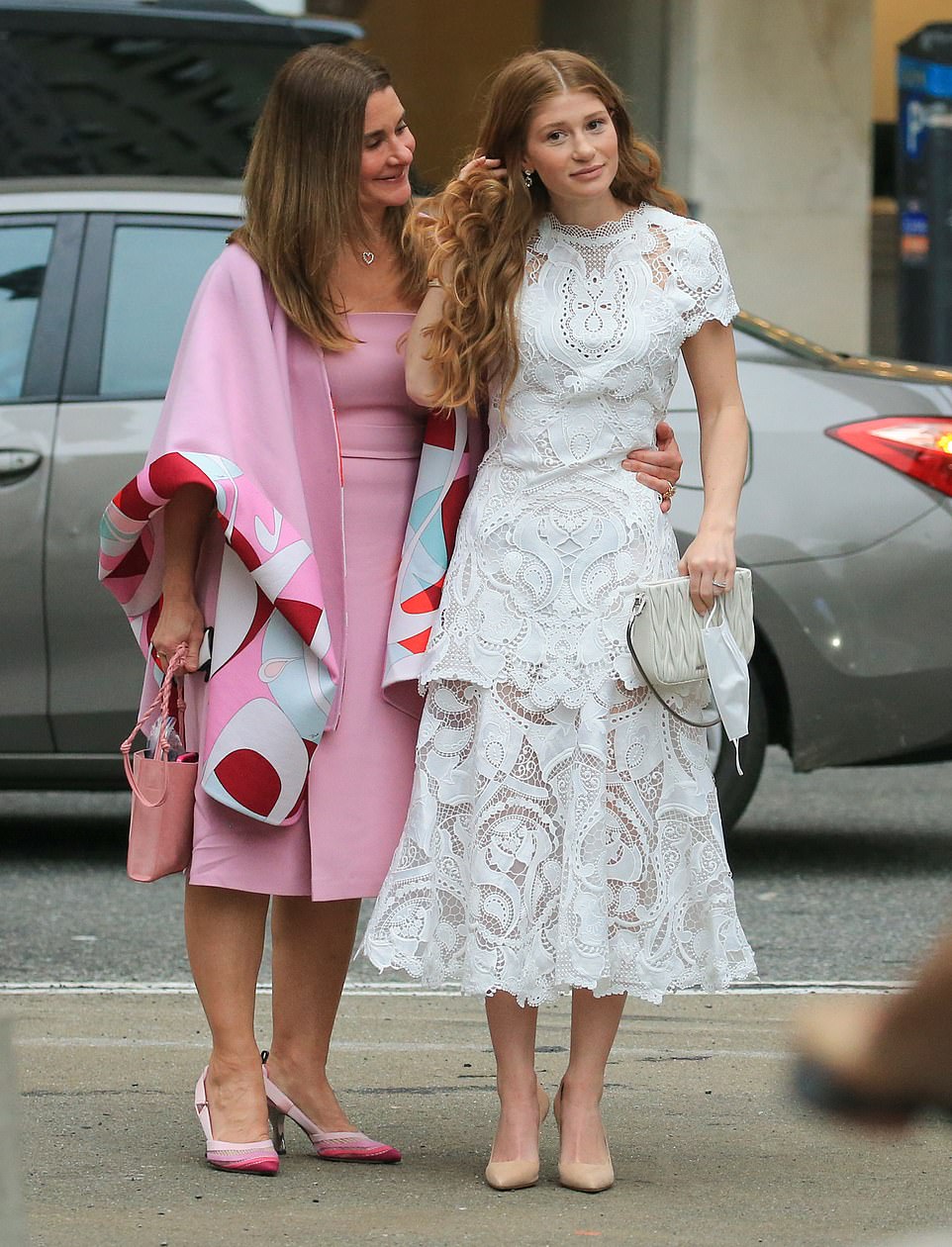 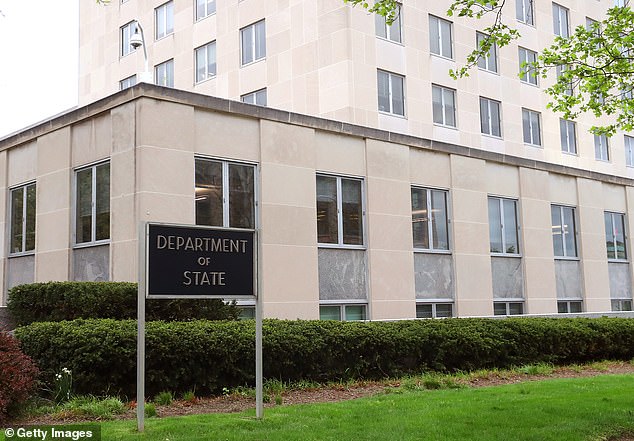