How ridiculous that some of our finest legal minds have been preoccupied this week with a spat between a couple of multi-millionaire, fading footballers’ wives.

The country’s closed down, the economy’s going off the cliff, is in the balance — and yet and were slugging it out in the High Court over who leaked beastly stories about the Rooneys to the Press.

Round one went to Rebekah — but Coleen, bless her, has refused to back down. She says she’s keen to see progress on ‘real issues’.

Real issues? Neither of these preposterous women appear to have any notion of what matters in the real world, where families are trying to survive for a year on less than they would pay for a designer handbag. 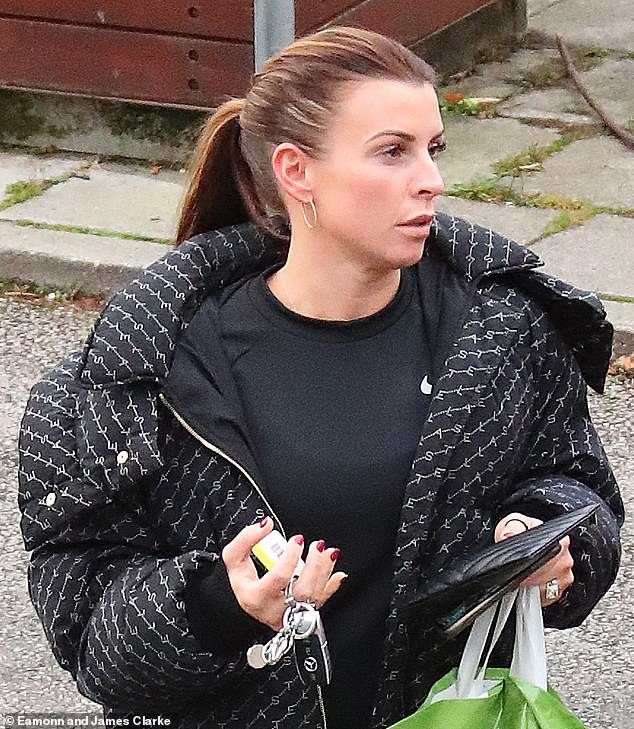 These pampered football hangers-on diminish the beautiful game. As a staunch Spurs fan, I get that it isn’t perfect, which is why it desperately needs the right kind of spotlight.

That’s being provided now by the likes of Marcus Rashford, who has fought to extend free school meals and reading opportunities for kids like him from poor backgrounds.

And by campaigns like Sportsmail’s to help care for those older players — some of them England legends — who now suffer early dementia from heading the ball.

Only this week, David Beckham said he was heartbroken over the way the late Nobby Stiles had to battle against the illness, and how Bobby Charlton has now been diagnosed with dementia. 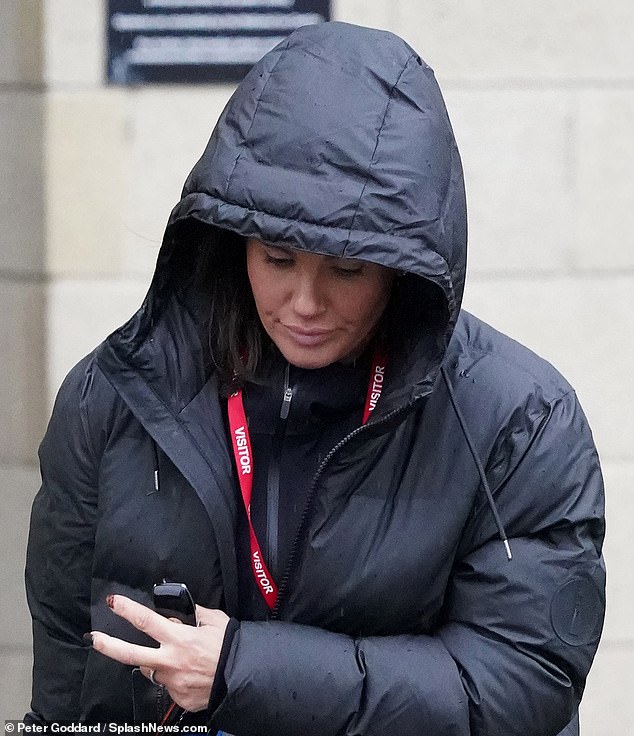 Mrs Rooney and Mrs Vardy, (pictured) neither of whom would be anyone without their husbands’ careers and fortunes, should end this stupid girlie spat

In the meantime, lesser teams, such as my local team Hendon, are struggling to survive.

They used to rely on ticket sales — 300 on a good day — bar tabs and deliciously soggy burgers to keep a community football club alive. All gone in lockdown.

In short, there could not be a worse time for self-centred Wags to spend hundreds of thousands of pounds suing each other over what was shown to one of them in confidence.

Mrs Rooney and Mrs Vardy, neither of whom would be anyone without their husbands’ careers and fortunes, should end this stupid girlie spat.

They should put the lawyer’s fees into grassroots football where their husbands began, and overcome their petulant grievances.

And, if it makes them feel better, go off and buy another designer handbag. 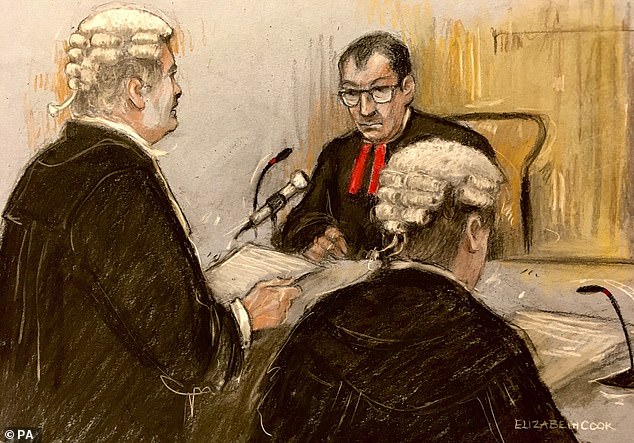 How ridiculous that some of our finest legal minds have been preoccupied this week with a spat between a couple of multi-millionaire, fading footballers’ wives (court artist sketch)

Can I be the only person sympathising with Trump-supporting Rudy Giuliani when his temporary hair dye sweated down his face during a TV briefing?

Of all of Trump’s achievements, surely the greatest was to make men of a certain age feel unashamed about dyeing their hair.

Home Secretary Priti Patel is accused of breaking the Ministerial Code by bullying her civil servants, shouting at them and demanding they worked as hard as she did.

I worked with Priti for two years and know she’s tough, straight-talking and expects the same dedication from her job-for-life, platinum-plated-pensioned civil servants as her dad did of her when she worked for him seven days a week in their corner store.

My only gripe is that, sharing a phone with her as I did, I was constantly being asked: ‘Pretty?’ I had to confess: ‘Sadly not.’

What next Nigella, crumpet?

Much derision as Nigella Lawson teaches us how to butter toast in her latest TV show.

Since you ask, unsalted butter, twice spread then sprinkled with sea salt flakes.

What is not flakey is this woman’s unsurpassed ability to grab the headlines with the most humble recipes. Avocado on toast? 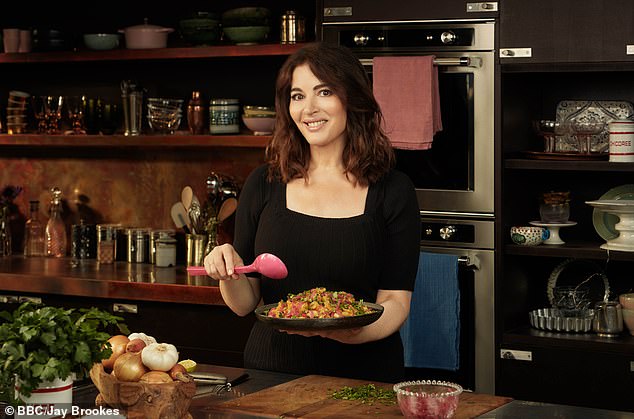 I love her new look — the perfect blow-dry replaced by shaggy ‘bed hair’, along with varnish-free nails.

Frankly, millions of us Nigella fans would tune in to watch her drinking a glass of tap water.

Promoting his new podcast The Lock In With Jeremy Paxman, the University Challenge host recoils at the notion of a snowflake generation.

‘I belong to that heretical set of people who actually like young people,’ he says.

Well, he certainly likes younger people — as the 70-year-old demonstrated when he ditched his partner and mother of his three kids for a book researcher 30 years his junior.

Royal experts are rightly ridiculing the new Netflix series of The Crown for its gross inaccuracies and made-up, histrionic dialogue, charting the period when Lady Di met and married Prince Charles.

The angry family scenes mean it’s got more soap than EastEnders. ‘I ‘ate you, you cheatin’ b***ard’ — Di to Charles.

‘Youse a lousy muvver’— Princess Anne to Her Majesty.

‘No ‘ugs, no luv, no wunda they all ‘ate you’ — Princess Margaret to her sister. Next stop for The Crown team — writing scenes for the regulars in the Queen Vic.

Awaiting her 400th operation to repair the damage after acid was thrown in her face, and now heading a new Co-op campaign, Katie Piper’s reply to those who call her ‘repulsive’ is: ‘My heart will never sink, life is a gift that I’m still here.’

As for the trolls, she forgives them. ‘You can imagine the background that poor person has been through to come from such an angry place.’

A life-affirming reminder to anyone who has been the target of such hatred that, as Katie says: ‘Only hurt people hurt people.’ 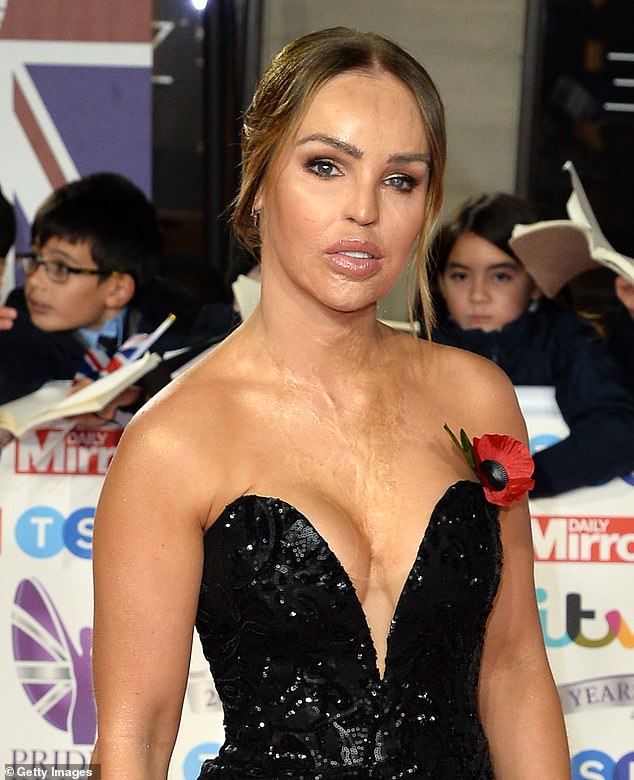 Awaiting her 400th operation to repair the damage after acid was thrown in her face, and now heading a new Co-op campaign, Katie Piper’s reply to those who call her ‘repulsive’ is: ‘My heart will never sink’

It is true that everyone loved Des O’Connor, not least me when I had the honour of filming an advert with him as he returned to TV to host Take Your Pick in the early 1990s.

Unlike many divas, the only thing he requested was a hip flask, which he personally filled and secreted in a pocket inside his jacket.

I will go to my grave believing it was full of mint tea. 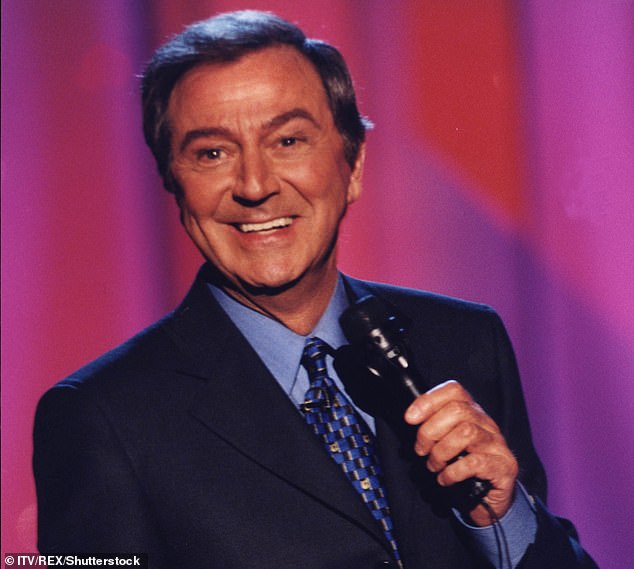 It is true that everyone loved Des O’Connor, not least me when I had the honour of filming an advert with him as he returned to TV to host Take Your Pick in the early 1990s

‘It’s evidence of progress. We’re choking for films like this — we need more.’

I agree and can’t wait for a remake of that other Christmas favourite, When Sally Met Sally.

He’s top of the bill

Great news that boxer Nicola Adams will have a last same-sex dance with partner Katya on Strictly.

Meanwhile, her not so nimble shoes have been filled by the other hoofer, Bill Bailey.

Luck is with him as his back story is perfect. He danced through his own pain to get his first 10 last week — he was grieving for his pooch Banjar who’s just been put down.

And, he tells us, his late mum would have been so proud of him. If nothing else, he’ll get a lifetime supply of Kleenex tissues. 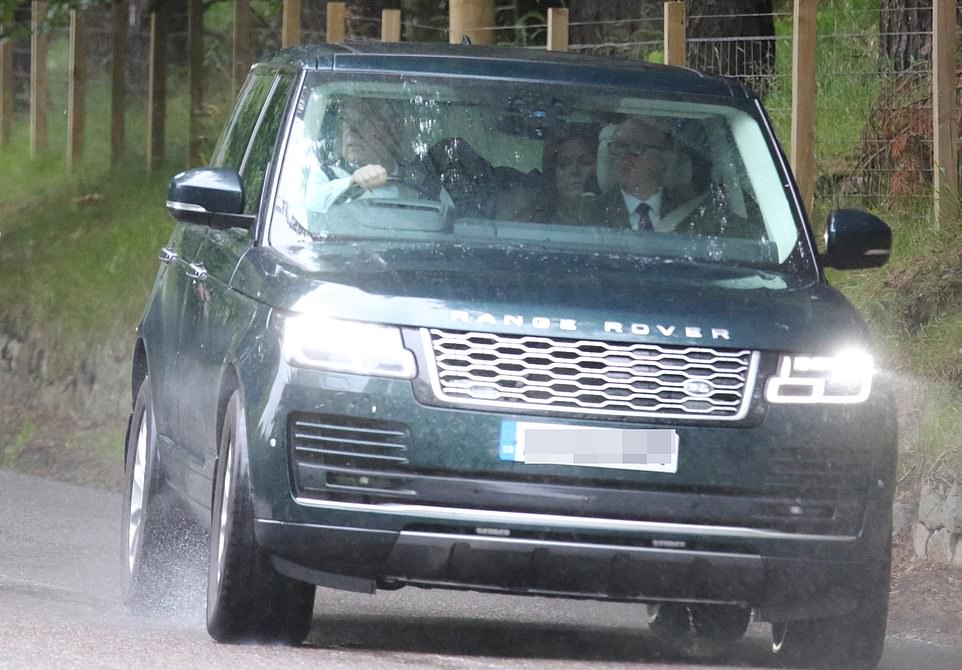 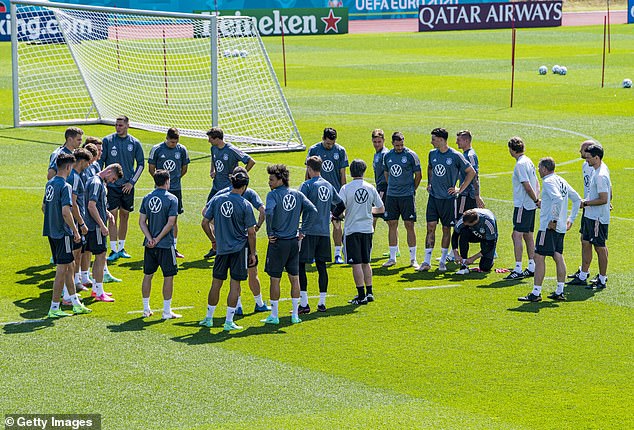 Euro 2020: Germany furious at not being able to train at Wembley the night before England match 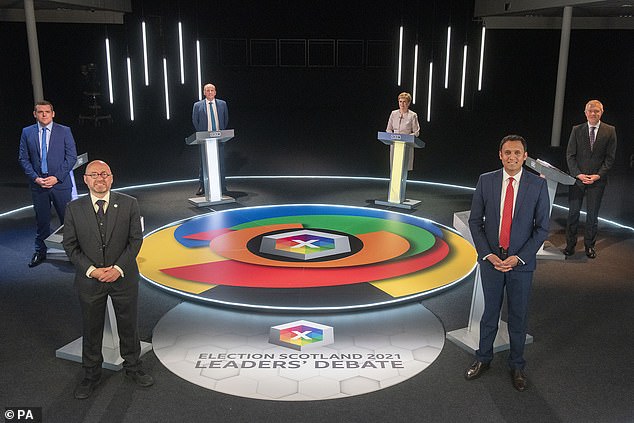 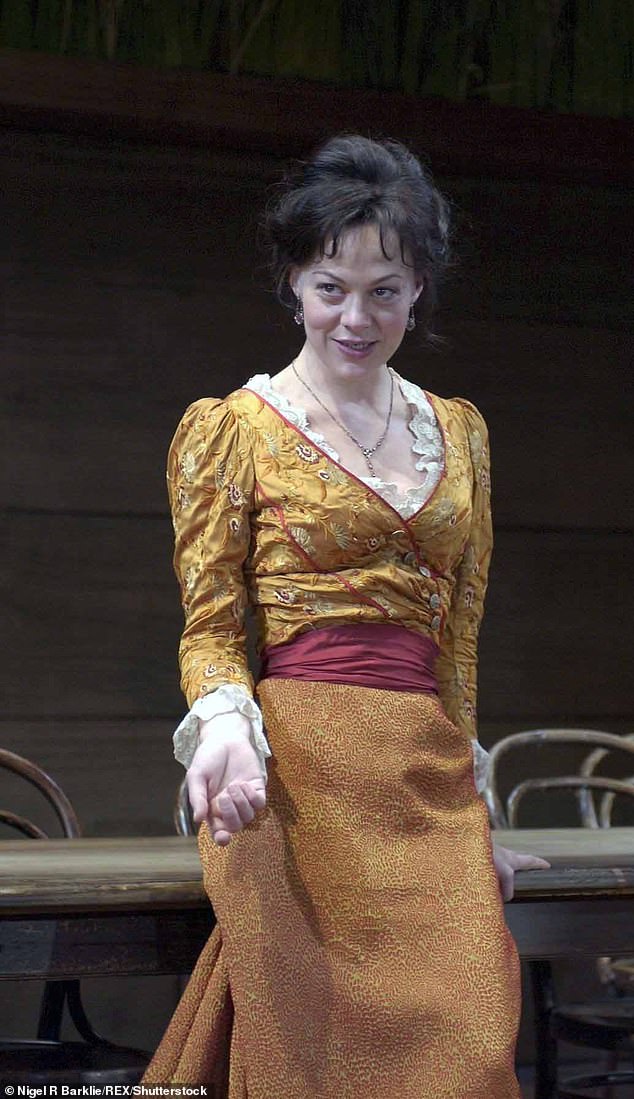 BAZ BAMIGBOYE: Truly, we have lost a luminous talent in Helen McCrory 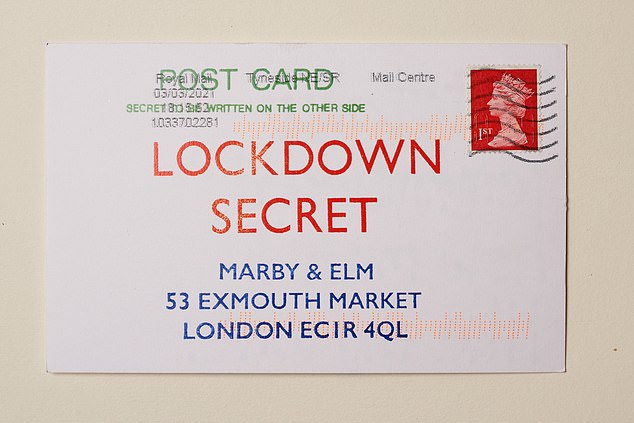 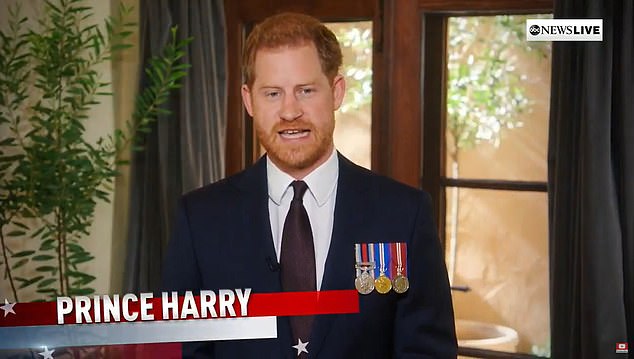 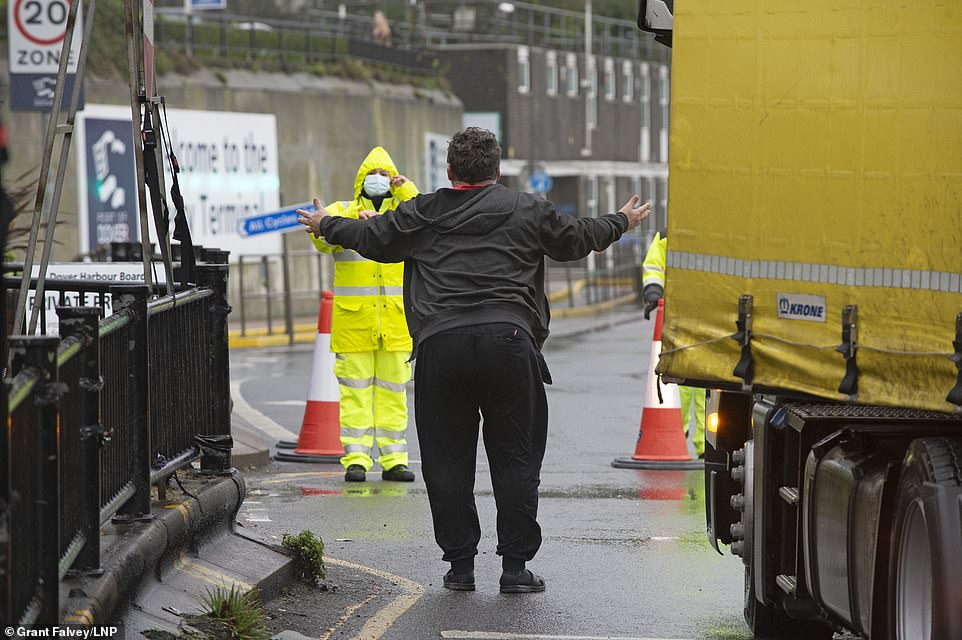