Family Christmases are still in jeopardy unless social distancing rules are toughened up after England’s second lockdown, a sub-group of SAGE has warned.

The Government’s scientific advisory group told ministers last week that returning to the same three-tier local system after lockdown will just take England back to where it was when the second wave peaked at the end of October.

It still isn’t clear whether the Tier Three rules are strong enough to keep the R rate below one, they warned. R, which measures how many people each Covid-infected person passes the virus on to, must stay lower than one for an outbreak to shrink.

Boris Johnson and his advisers have already confirmed England will return to a tiered local lockdown system in December, but exactly how it will look is not yet clear – SAGE advisers say it must be able to tighten the screw even more than in the past.

Real-world data, however, suggests that Tier Three rules already work well enough to bring the R at least to one, if not lower.

SAGE’s official estimate today puts the R rate in the North West – based on data from before the national lockdown and from during Tier Three – at between 0.9 and 1.1. This was down from a high of between 1.3 and 1.5 in mid-October, before Tier Three.

Department of Health testing data also shows that infection rates plummeted in Liverpool under the local lockdown rules, from a rate of 681 cases per 100,000 people to just 274 per 100,000 last week.

And a top Government adviser today admitted that Tier Three was ‘having the effect it needed to have’ on England’s  crisis and keeping it under control before national rules were brought in.

It comes as the UK today confirmed another 27,301 positive coronavirus tests and 376 deaths from Covid-19 and two more reports have added to the wealth of data showing England’s second wave started to level off last week.

SAGE’s own estimate of the R rate, based on data from before the national lockdown, saw it fall for the third time in a month to somewhere between 1.0 and 1.2 across the UK, down from 1.1 to 1.3 last week. This is the first time the advisers have thought R could be down to one since early September.

And in a weekly update from the Office for National Statistics, mass testing revealed that there were 47,700 new infections per day in England in the week up to November 6, up only marginally from the 45,700 the week before. It said infections ‘remains at about 50,000 new cases per day’. 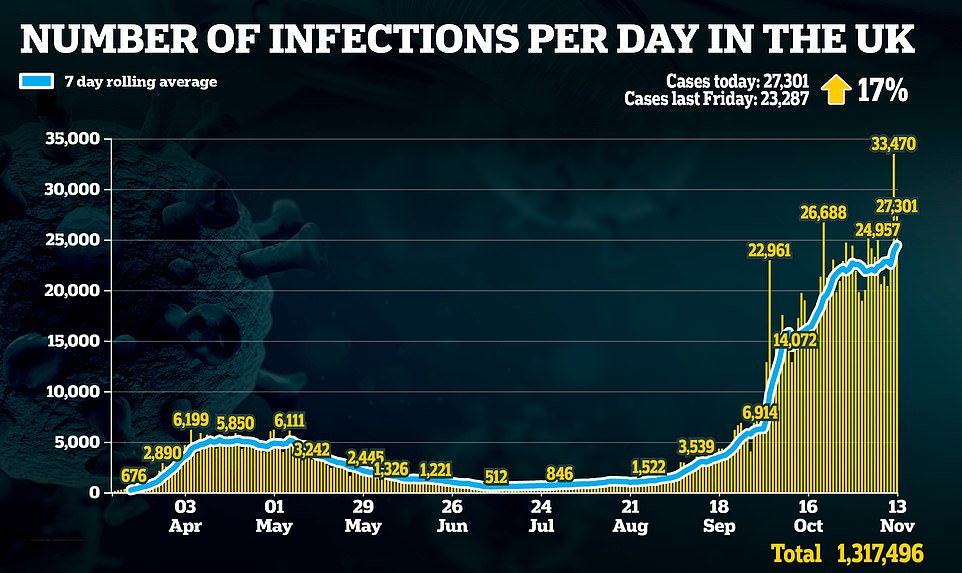 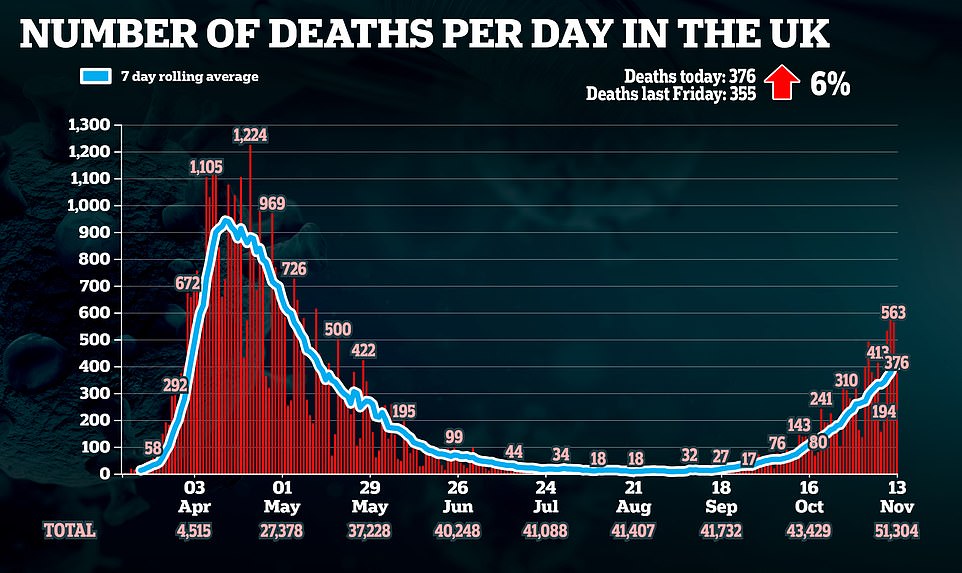 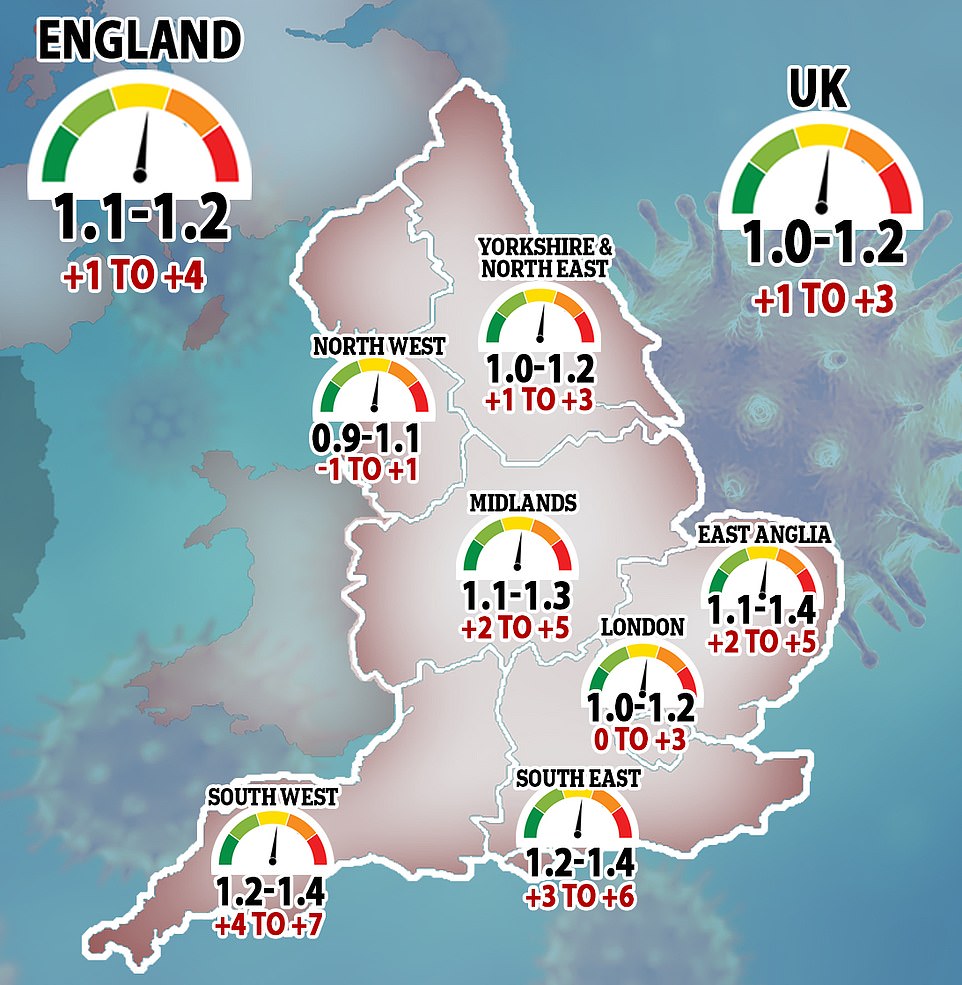 SAGE’s official estimate of the R rate has declined this week and could now be as low at 1.0 for a whole and down to 0.9 in the North West of England. It remains higher than one in all other regions and England, however 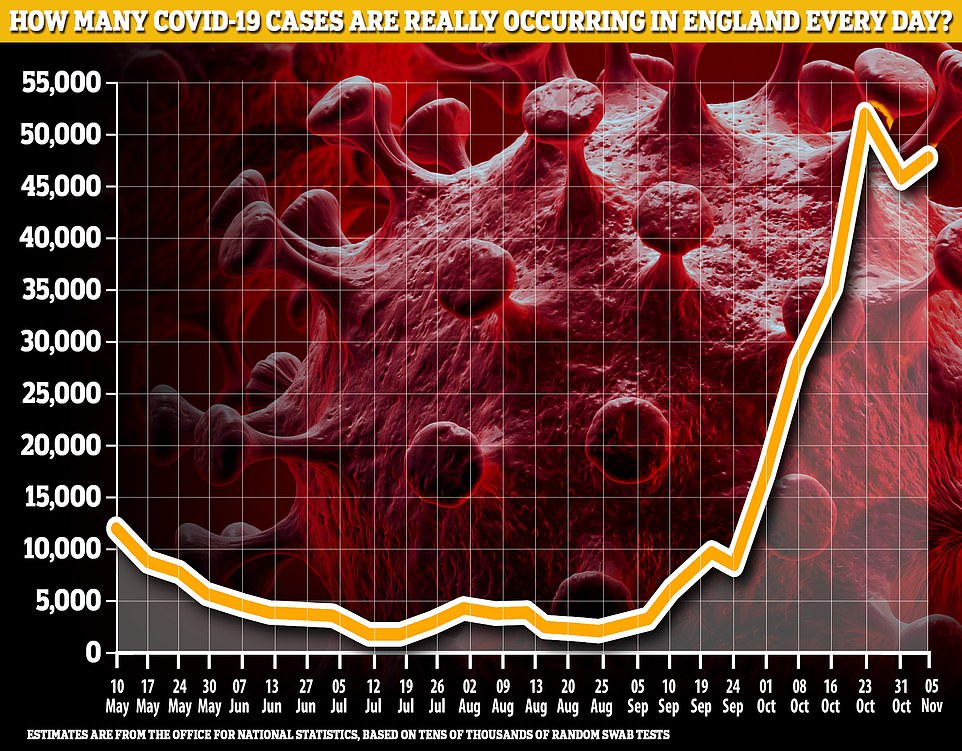 In a paper dated November 4 SPI-M, a group of scientists who crunch numbers for SAGE, warned that there still isn’t strong evidence that Tier Three lockdowns are tough enough to keep R below one.

The rules, which included the closure of pubs and bans on households mixing, were put in place over much of the North of England before a national shutdown was called.

SPI-M said: ‘If England returns to the same application of the tiering system in place before 5th November then transmission will return to the same rate of increase as today.’

The experts added: ‘It is not yet clear whether tier 3 measures alone are sufficient to reduce the reproduction number below one.’

Released today by SAGE, the paper comes – confusingly – as a senior Government adviser admitted this afternoon that Tier Three was working well. The source added that Tier Two was also having the desired effect in some areas, though not as much as in Tier Three areas.

In the harshest tier, residents were prohibited from meeting people they didn’t live with and saw pubs were forced to close – but gyms, non-essential shops and restaurants could stay open.

In Tier Two, people were banned from mingling with anyone outside their own homes as well, but pubs could stay open.

All three tiers had to abide by the national rules that were in place at the time including the 10pm curfew and rule of six.

The percentage of tests that come back positive has dropped for the first time in England in almost three months, according to official data.

It raises further hopes that the country is getting a better grip on its second wave and may already be through the thick of it.

Experts say one of the most accurate and fair ways to track the virus’ trajectory is to look at test positivity rates – the proportion of swabs that come back positive.

If a country has a high positivity rate it means the centralised system is struggling to keep up with the outbreak. But a low rate means only a small amount of the population actually have the disease.

A weekly Public Health England report published today found 9.7 per cent of Pillar 2 tests carried out in the week up to November 8 yielded a positive result. This was down from 10.2 per cent the seven days prior.

It marks the first time the Pillar 2 test positivity rate has dropped since the week ending August 2. Pillar 2 are those done in testing centres, drive-through clinics and in people’s homes – which account for the vast majority of all tests.

Pillar 1 tests – those done in hospitals – were also down week-on-week, dropping from 4.8 per cent to 4.5 per cent. It was the first time this figure had fallen since the week up to August 23.

It comes as Britain yeserday announced another 33,470 positive cases – 39 per cent more than last Thursday – despite indicators showing the outbreak is slowing down.

The case count is the highest since the Covid-19 outbreak began and comes a week after England’s second national lockdown started. It is an increase from 22,950 yesterday.

Unofficial statistics, however, suggest that the country’s outbreak had already started to slow down and shrink before the lockdown began on November 5, and it is expected to continue shrinking throughout November during the stringent rules.

The SAGE expert said: ‘On Tier Three, evidence looks like Tier Three in most places gets the R to one or below. That does have the effect needed to have.

‘Tier Two in some places does the same depending on the place and how much it’s adhered to. Tier One doesn’t look like it does it. This gives you idea sorts of measures needed in future after lockdown to keep it under control.’

When pressed, he would not give his opinion on relaxing measures at Christmas to let families spend the holidays together. He said it was purely a ‘policy decision, not one for science’.

SAGE fought tooth and nail for the second lockdown, presenting the Government with increasingly gloomy models that predicted thousands of daily deaths and hospitals being overwhelmed by December.

It is hard to judge the effects of the three-tier system because it was only used properly for a fortnight before the national lockdown was announced.

But there have been a number of signs to suggest those dark forecasts would never have come true.

Analysis by MailOnline today found the number of patients being treated in hospitals in Liverpool fell by 15 per cent in the week before the second national .

NHS England figures show there were 413 people with Covid-19 at Liverpool University Hospitals, the city’s biggest trust, on November 5, the day the country went into the second lockdown.

This marked a 13 per cent drop from the 475 who were being treated the week prior, on October 30.

However, it is true the trust is treating more Covid-19 patients than at the peak of the first wave – for comparison, there were 346 people with the virus in Liverpool’s hospitals on April 12.

But the trust is thought to have at least 1,600 total beds, and, as of November 5, 1,268 were occupied by patients of all conditions.

It suggests the trust, which cancelled scores of non-urgent operations to make room, is currently operating at 80 per cent occupancy – making it quieter than it was last December.

Major trusts in other Tier Three areas also saw declines in the number of Covid-19 patients in their hospitals before the second lockdown, suggesting the most stringent local measures were not given enough time to work.

For example, St Helens and Knowsley Teaching Hospitals NHS Trust in Merseyside was treating 105 people with the disease on November 5 compared to 118 the week before.

A similar story is playing out in Blackpool Teaching Hospitals NHS Foundation Trust, where beds occupied by Covid-19 fell from 188 to 142 in the same time period.

But other Tier Three areas like Manchester and Lancashire have not seen a fall in Covid-19 hospital admissions – yet.

Though the measures were not enforced until late October in these areas, which means the benefits could take another week or so to translate into the hospital data. 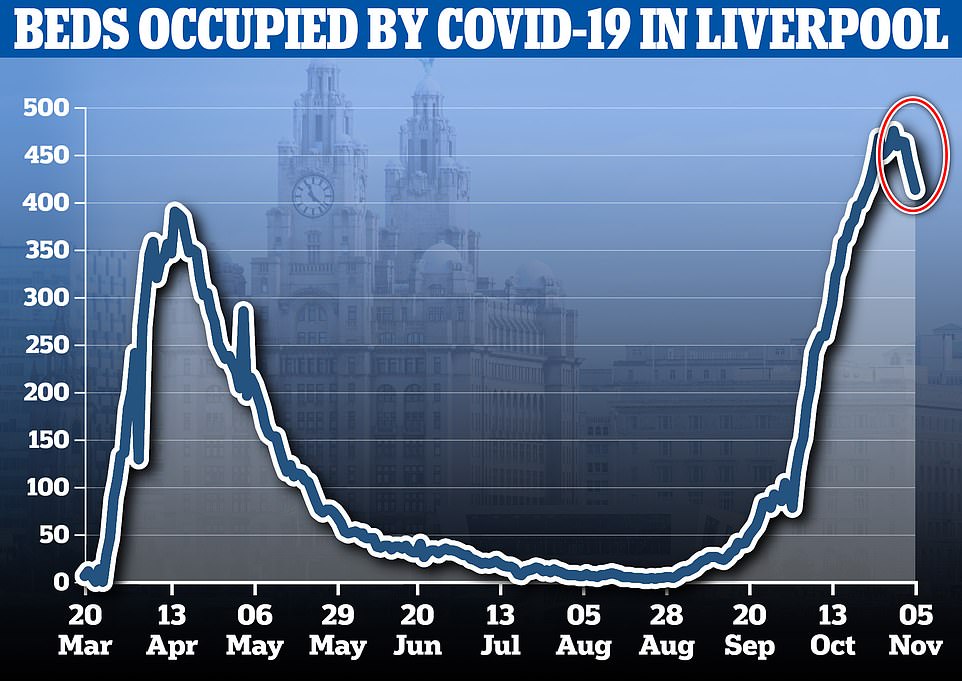 The number of coronavirus patients being treated in hospitals in Liverpool fell by 15 per cent in the week before the second national lockdown , according to official NHS data that further calls into question whether the autumn shutdown was justified

Major trusts in other Tier Three areas also seen declines in the number of Covid-19 patients in their hospitals before the second lockdown, suggesting the most stringent local measures were not given enough time to work. For example, St Helens and Knowsley Teaching Hospitals NHS Trust in Merseyside was treating 105 people with the disease on November 5 compared to 118 the week before. A similar story is playing out in Blackpool Teaching Hospitals NHS Foundation Trust, where beds occupied by Covid-19 fell from 188 to 142 in the same time period

This is because of the lag in time it takes for Covid-19 patients to fall seriously ill enough to need treatment.

Commenting on the findings, Professor Paul Hunter, an epidemiologist at the University of East Anglia, told MailOnline: ‘I’ve got no doubts that Tier Three was working, personally I think the data is very clear that Tier Three was sufficient to bring down cases and I think most local authorities in Tier Two were working as well.’

In the final days of the tiered system, 26 out of 31 councils (82 per cent) under the then-harshest restrictions recorded a dip in their Covid-19 cases. Tier Three allowed restaurants, nonessential shops and gyms to stay open but pubs were forced to shut and people weren’t allowed to mix with other households.

Tier Two areas with the lockdowns with 22 out of the 64 councils (34 per cent) under the measures recording a fall in Covid-19 infections in the week up to November 5. Tier Two only restricted people from mingling with people they didn’t live with. 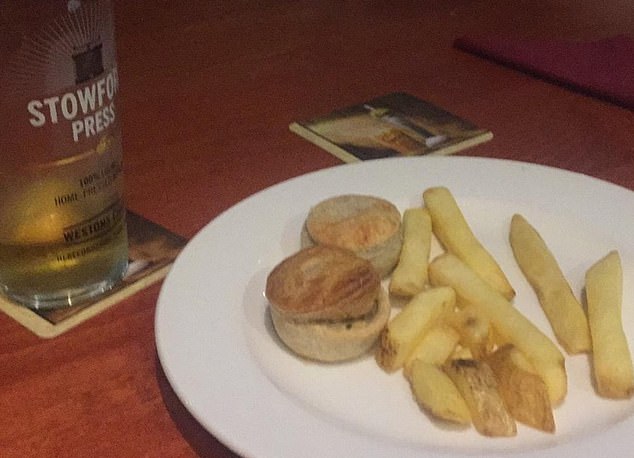 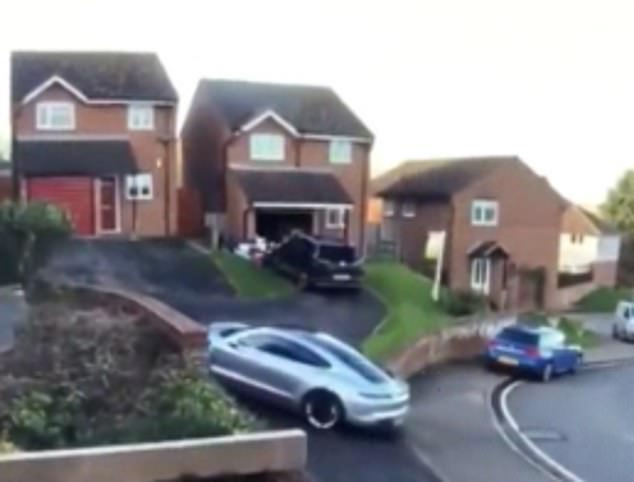 Expensive parking fail! Porsche hits SUV in driveway then careers over wall and lands on another car 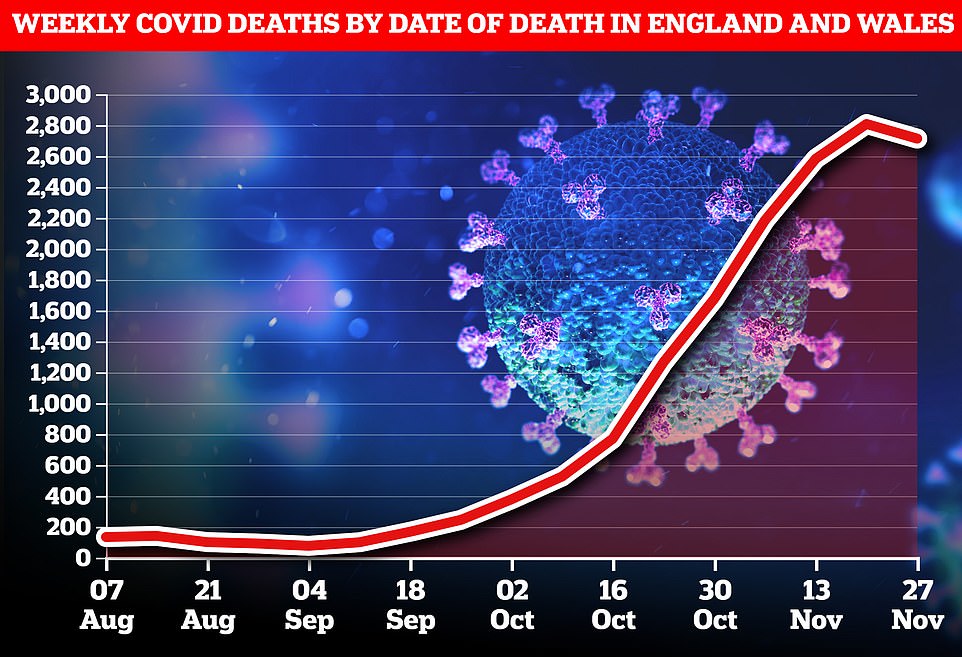 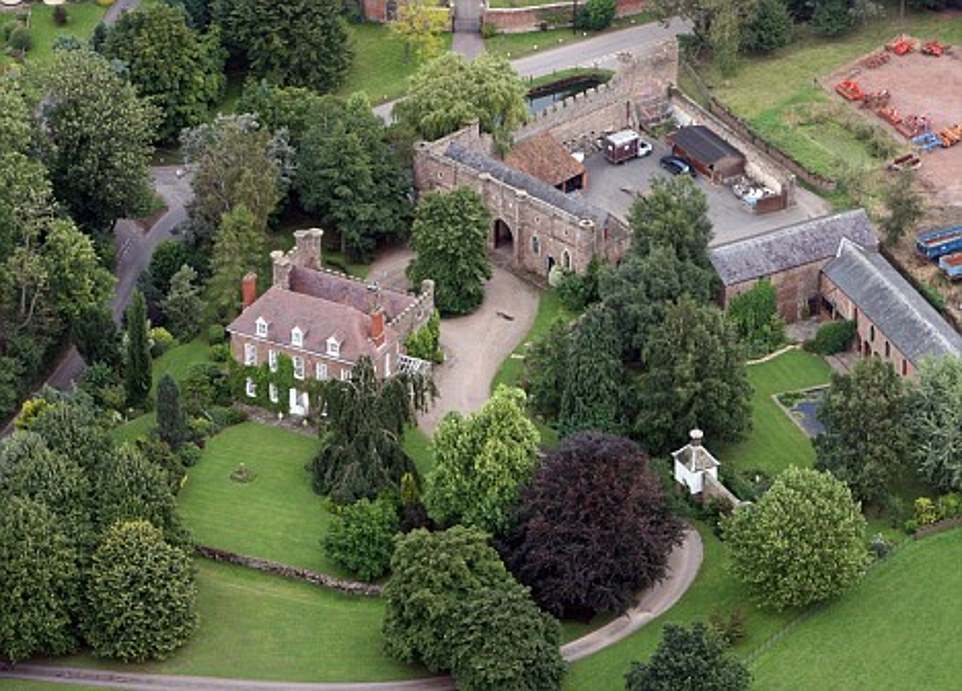 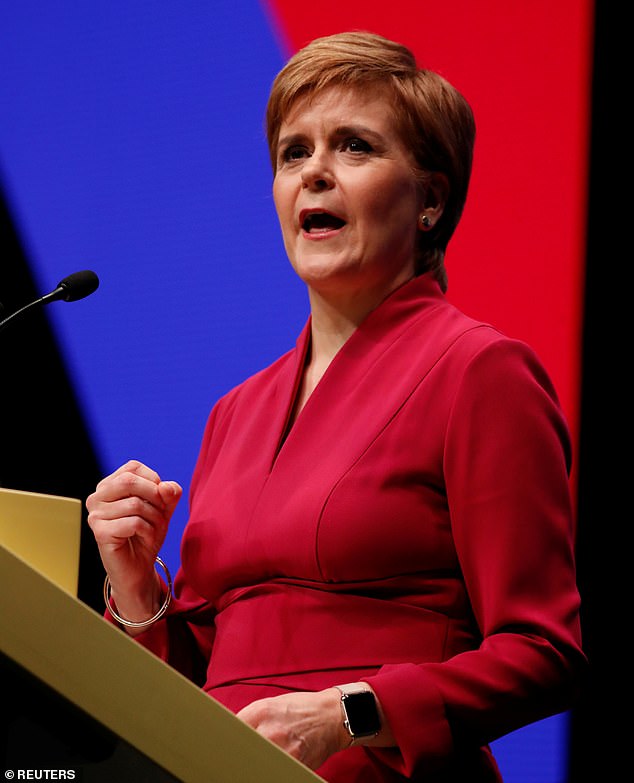 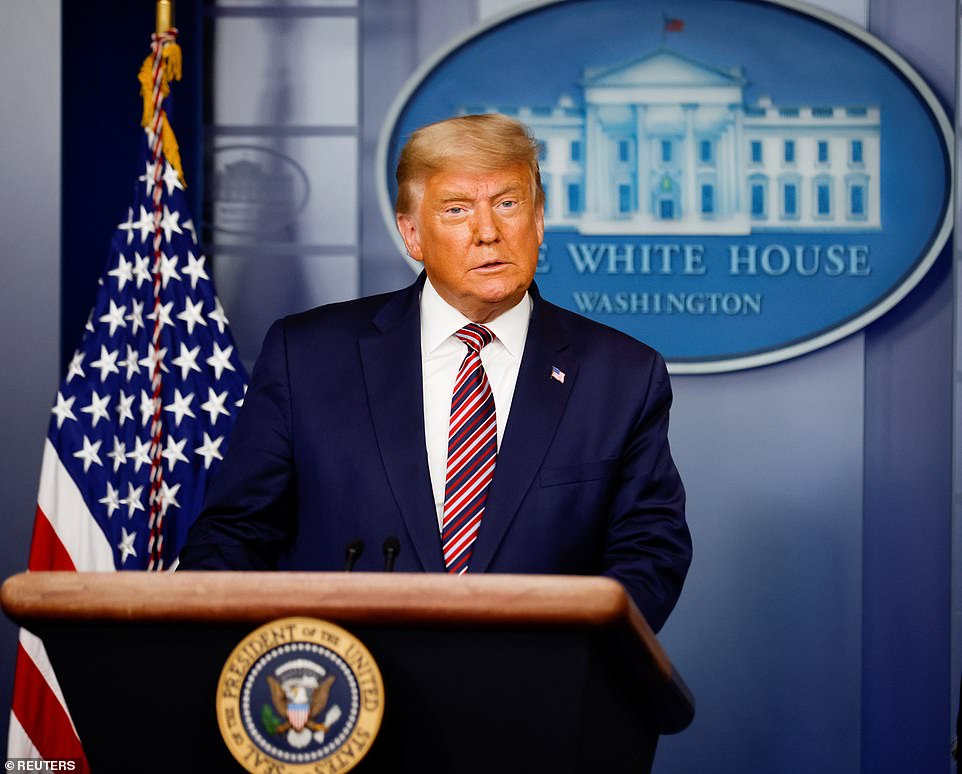 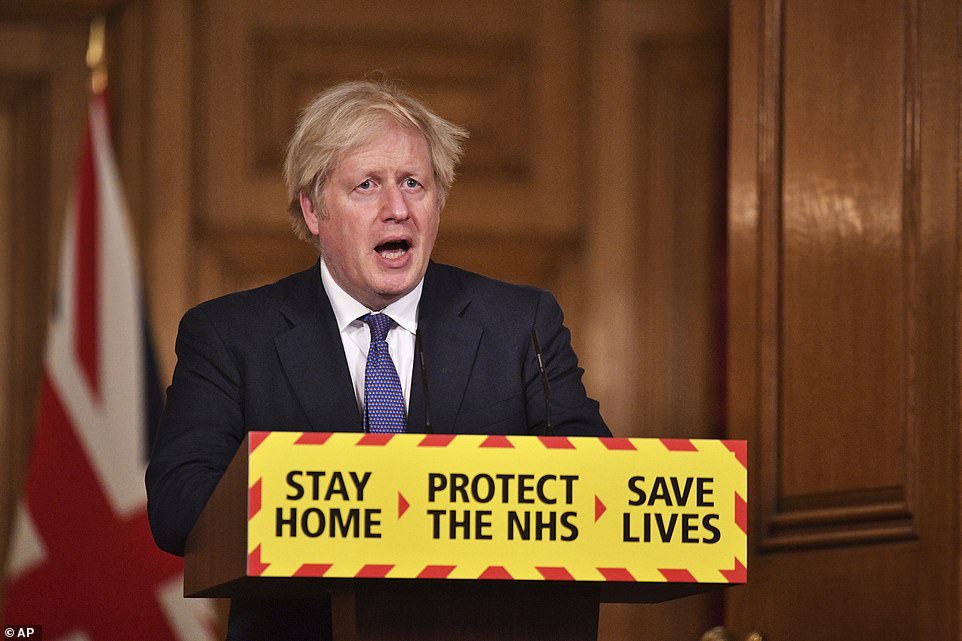 Boris reveals ALL travel corridors will be suspended from 4am Monday 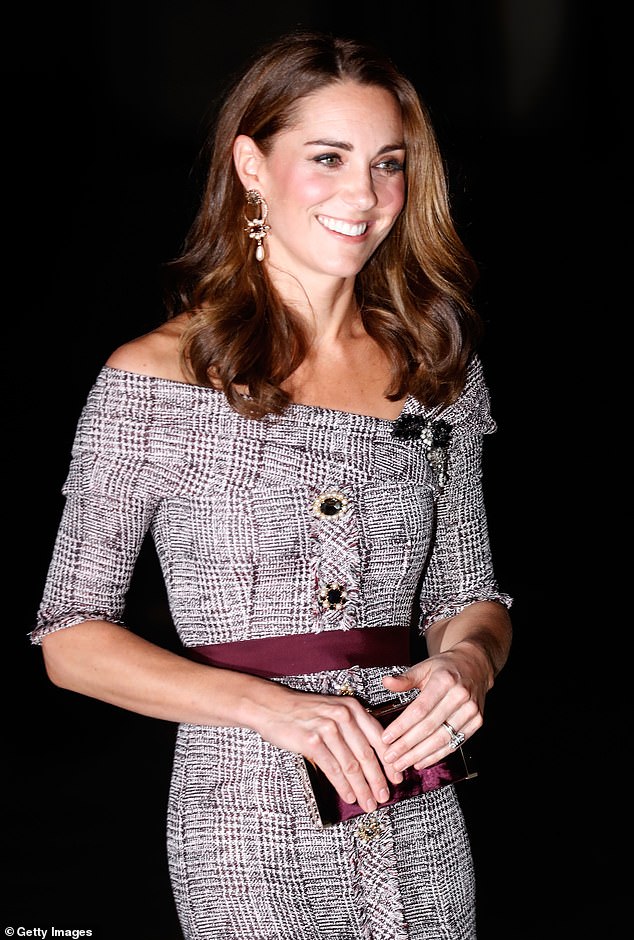