EastEnders’ Kush Kazemi is set for a dramatic exit from the soap as his most recent storyline comes to an end.

The market trader, played by actor Davood Ghadami, has most recently struck up a romance with Kat Slater, portrayed by Jessie Wallace.

However Davood will not be leaving Albert Square until 2021with bosses having a ‘huge plot planned’ for his departure after six years on the soap. 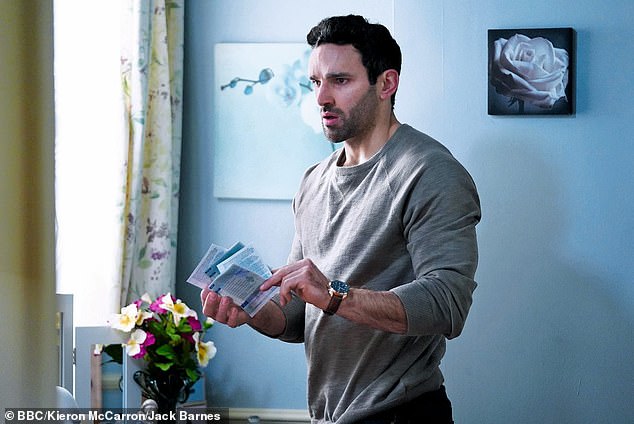 New chapter? EastEnders’ Kush Kazemi, played by actor Davood Ghadami, is set for a dramatic exit from the soap

A source told MailOnline: ‘Kush will be written out of the soap next year as his storyline reaches a natural close’.

Speaking about the exit, a TV insider told  ‘Bosses have a huge plot planned but although Davood was told in January, his departure it is not for a very long time yet in fact Kush will be on screen until well into 2021.’

An EastEnders spokesperson also told the publication: ‘We can confirm Davood will be leaving EastEnders when his contract comes to an end next year.’

Kush is currently in a relationship with Kat and was previously married to Shabnam Masood, played most recently by Rakhee Thakrar. 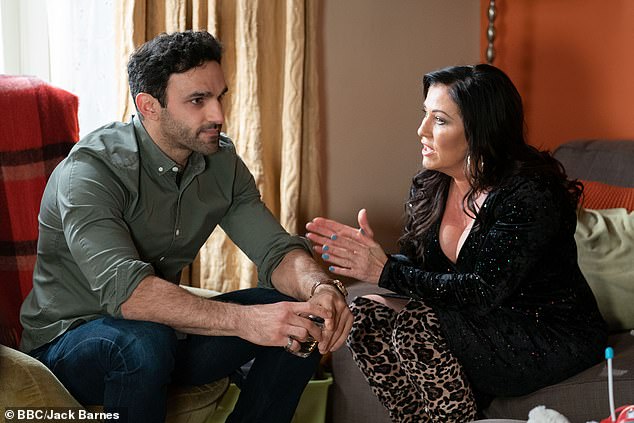 Couple: The market trader, played by actor Davood Ghadami, has most recently struck up a romance with Kat Slater, portrayed by Jessie Wallace

It comes after Jags Panesar is also set to leave the soap which will involve his cunning mother Suki.

The rent collector, played by actor Amar Adatia, has most recently been seen striking up a secret romance with Habiba and questioning his role in the some-what sketchy family business.

Now, Amar has told he’s leaving the soap after extending his contract over lockdown and hinted he will have an explosive final storyline. 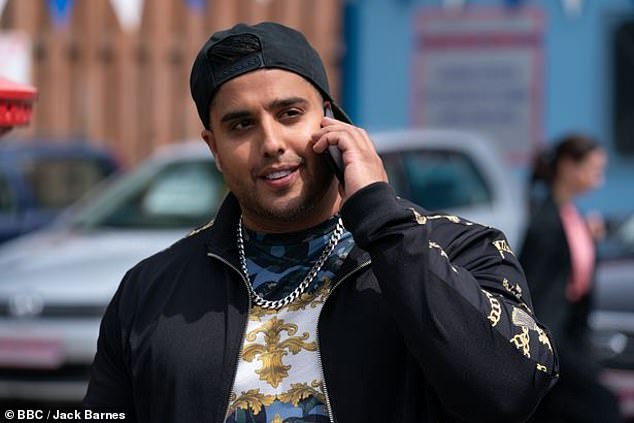 Dramatic exit: EastEnders’ Amar Adatia (Jags Panesar) has revealed that he’s set for a dramatic exit from the soap which will involve his cunning mother Suki (Balvinder Sopal)

Speaking about his exit, Amar said: ‘I can’t share too much about what happens but it serves to further prove just how far Suki will go to get her way!’

‘Jags went against her and being the strong women she is, just like their father in the past, anyone that goes against her doesn’t tend to fare so well.’

Fans have previously suggested that Suki (Balvinder Sopal) had something to do with her husband being sent to prison.

And Suki has already shown she’s not afraid of bold action after faking having cancer to control her children in a previous storyline. 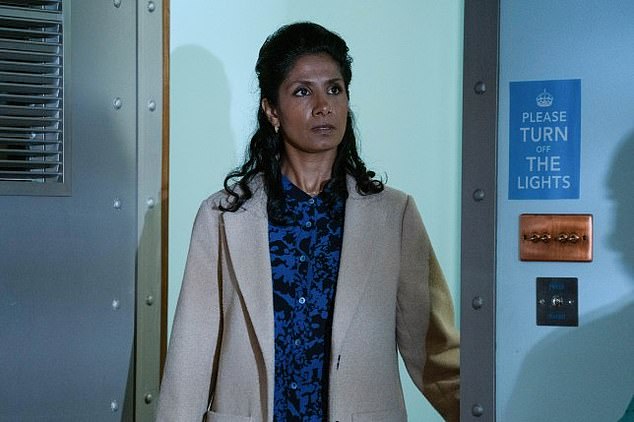 What will she do? The actor said that ‘anyone that goes against Suki doesn’t tend to fare so well’ when hinting about his impending exit (pictured actress Balvinder Sopal)

Amar, whose next film is called R.I.A and also stars Luke Goss, explained how he has already stayed longer than he originally intended too on EastEnders after other commitments got put on hold to the pandemic.

He said: ‘With timings all pushed back, I was more than happy stay a little bit longer to make sure that we wrapped up Jags’ storyline properly.’

The actor also revealed that he’ll be back on the big screen next year in a boxing movie, which he’s got to get fit for. 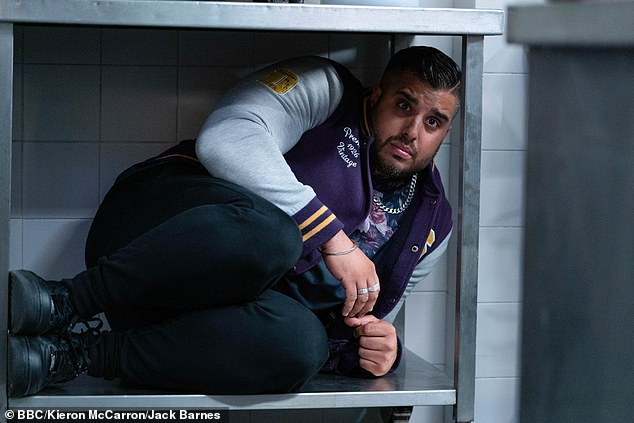 Almost over: Amar had planned to leave EastEnders earlier but ended up staying on for a while longer due to the coronavirus pandemic (pictured hiding in a previous episode) 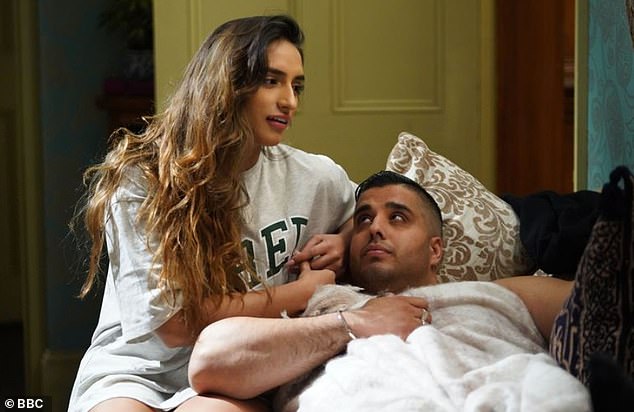 Secret romance: Jags and Habiba have grown closer during recent episodes but haven’t told anyone about their relationship

Earlier in September it was revealed that Habiba (Rukku Priya Nahar) and Jags’ relationship had heated up during lockdown, with the pair coming dangerously close to being caught in a cosy embrace during one episode.

As Habiba heard her family coming, she forced Jags (played by Amar Adatia) to hide in the bottom of a table, leaving him mortified.

Habiba and Jags also shared a surprise kiss when he opened up about his mum Suki’s lies, as he admitted it made him see his mum in a completely different light.

And Habiba has also been helping to change Jags’ mind on his family, making him question whether he wants to continue as a rent collector for them. 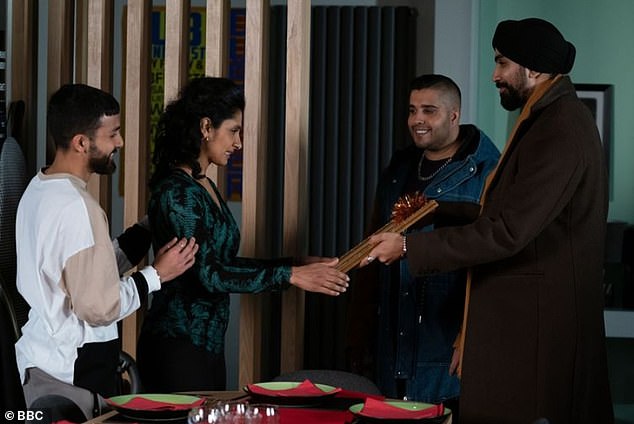 Candid: Jags and Habiba kissed after he opened up about his mum Suki’s lies, admitting it’s left him torn between his family

However it doesn’t appear likely that his cunning mother Suki will let her son leave the family business without a struggle.

It comes after EastEnders fanshailed producers for their clever camera trickery after watching Martin Fowler and Ruby Allen have the soap’s first socially-distanced kiss.

On Friday’s episode, fans watched as they smooched and held hands, with camera shots and the use of a railing to obscure where they would have made contact.

In the scenes, Martin and Ruby discussed going away after the return of his ex-wife Stacey Slater, shortly before Twitter was flooded with praise.

As they said goodbye, the railing hid their faces as they moved in for a farewell kiss.

Viewers soon flooded to Twitter to praise producers on how they masked the socially distanced scene.

One wrote: ‘Ruby and Martin’s ‘kiss’ in Eastenders today killed me’, while another chimed: ‘They really put a pole in between to make it look like they kissed’. 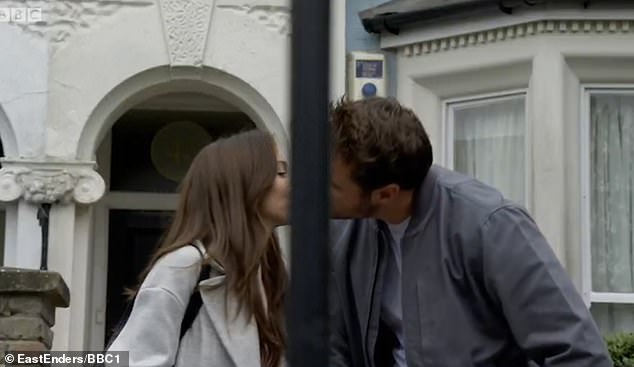