Labor Day weekend was the busiest for air travel since the pandemic began in March, with Transportation Security Administration (TSA) screening more than 2million people.

On Friday, the TSA screened 968,000 travelers, the largest number since March 17.

The rising numbers showed a renewed confidence among travelers following the shutdowns but raised concerns about whether the higher levels of air travel will lead to a spike in coronavirus numbers. 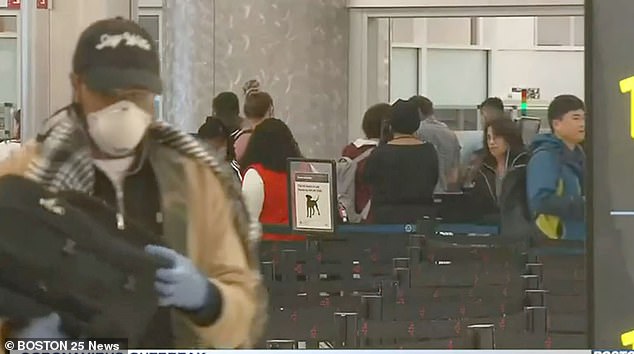 Labor Day weekend was the busiest for air travel since the coronavirus pandemic began in March, as travelers regain confidence despite concerns it could lead to a spike in cases

On Saturday and Sunday, the TSA also screened a further 664,640 and 689,630 travelers, respectively, well above the numbers seen in April and May.

At the lowest point on April 14, the TSA screened only 87,534 passengers, according to .

Despite the increase in travelers, the numbers are still well below what would be seen on a general Labor Day weekend.

The number of passengers screened on Friday was still 50 percent lower than Labor Day weekend last year when nearly 2.2million people went through a TSA checkpoint.

The drop in numbers has led to shorter wait times for those who do decide to catch a flight and is now at least half the time it was this time last year.

Travelers can wear masks while waiting in line but must temporarily lower them when having documents check by an agent.

‘For travelers who have not flown since the beginning of the pandemic, the TSA checkpoint experience will be noticeably different as compared to Labor Day last year,’ TSA Administrator David Pekoske said.

‘Passengers also play an important role in helping us ensure they safely and efficiently get through security screening at our airports while wearing masks and respecting social distancing.’

Air travel had seen a previous spike at the unofficial start to the summer over Memorial Day weekend.

Yet this was also significantly lower than in previous years. In 2019, TSA screened eight times that number, with 2.7million generally traveling over the holiday weekend. 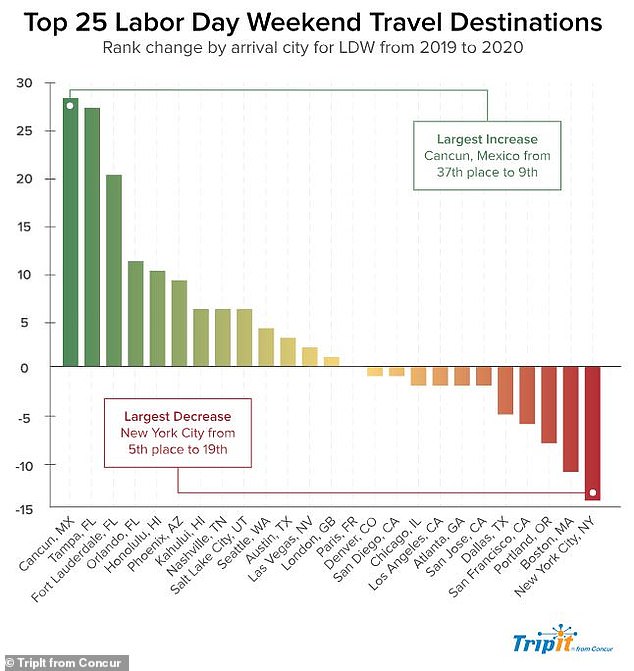 The top destinations for travelers this Labor Day weekend was also affected by the pandemic with large drops in travelers to the likes of New York, where a 14-day quarantine is required for those arriving from hotspot states. Cancun, Mexico, had the biggest increase in travelers 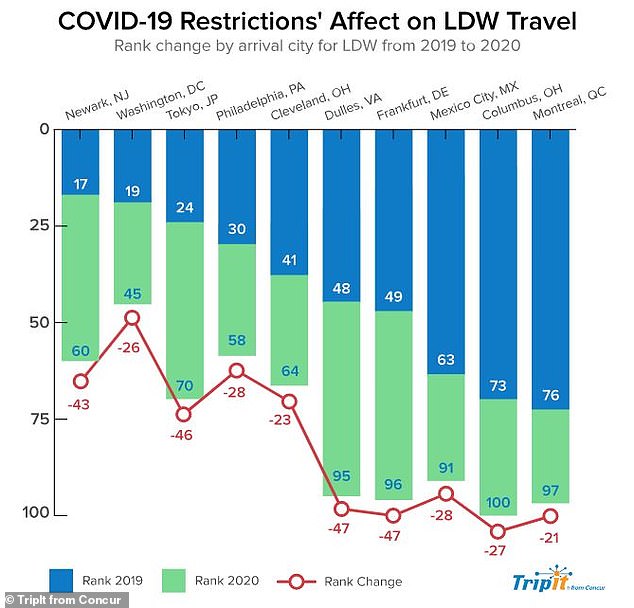 The top destinations for travelers this Labor Day weekend was also affected by the pandemic with large drops in travelers to the likes of New York, where a 14-day quarantine is required for those arriving from hotspot states.

According to , the top destinations for Labor Day weekend in 2019 were Denver, Colorado; Chicago, Illinois; and Las Vegas.

Las Vegas was in poll positions in 2020, followed by Denver, Orlando, and Chicago.

After being the global epicenter of the pandemic in April, New York City saw the largest drop in travelers, dropping from 5th place to 19th place.

Tampa, Fort Lauderdale and Orlando in Florida all had the next largest jump in travelers this year. 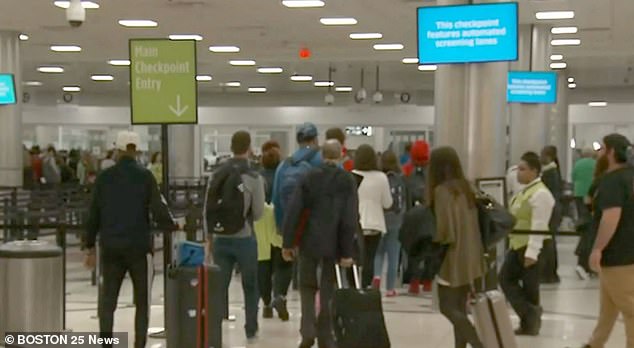 On Friday, the TSA screened 968,000 travelers, the largest number since March 17 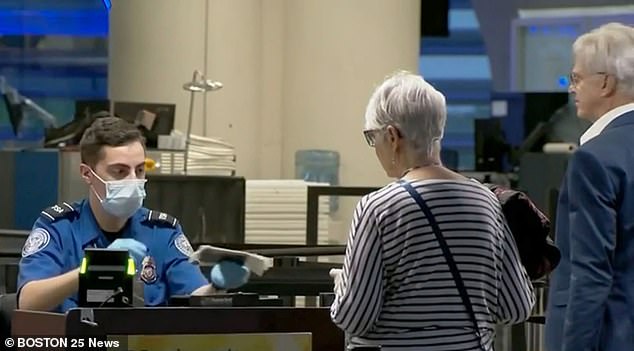 The number of passengers screened on Friday was still 50 percent lower than Labor Day weekend last year when nearly 2.2million people went through a TSA checkpoint

There was a 200 percent year-over-year increase on flights booked to Florida this Labor Day weekend compared to last year, TripIt reports.

Travel to current coronavirus hotspots has caused concern for health experts about the risk of further spread of the virus.

According to CDC guidelines, travel increases the chance of getting or spreading COVID-19 and travelers are asked to consider whether coronavirus is spreading at their destination or if they are at increased risk of the virus before their fly.

Most major US airlines also now require passengers to wear face masks throughout the flight.

The recent increase in air travel comes as airlines begin to open back up their routes ahead of fall travel.

American Airlines, Delta and United all plan to resume as many as 15 long-haul international routes in the next few weeks, despite predictions that passenger numbers will drop again after the summer season.

Southwest also announced that it is adding Miami and Palm Springs to its routes by the end of the year.

Major airline carriers are in desperate need of more revenue, as demand for air travel has plummeted with the coronavirus pandemic continuing to rage on. 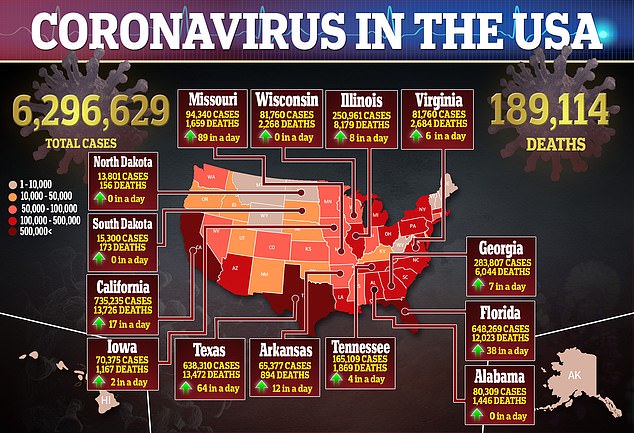 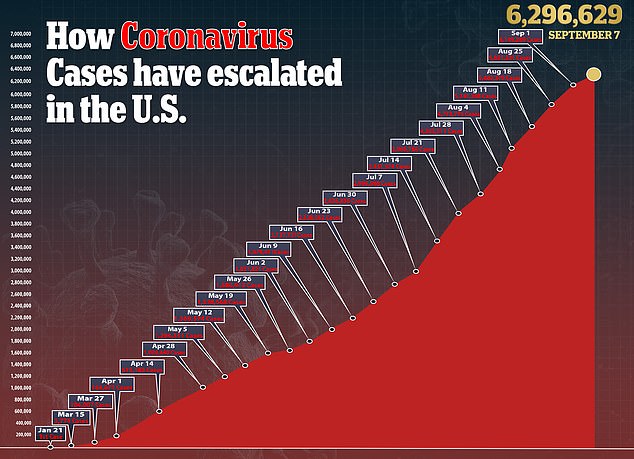 That is not as bad as in April and May, when passengers had decreased 96 per cent and 90 per cent, respectively, compared to 2019’s figures.

The Transportation Safety Administration has figures showing how far air travel has dropped off since the middle of March, when coronavirus concerns began to hit the US hard and states began going into lockdown mode.

Throughout April – during the height of the quarantine phase and pandemic in the US – the TSA reported that the number of passengers screened frequently fell to 80,000 to 90,000 people. In 2019, they routinely screened more than 2million passengers. 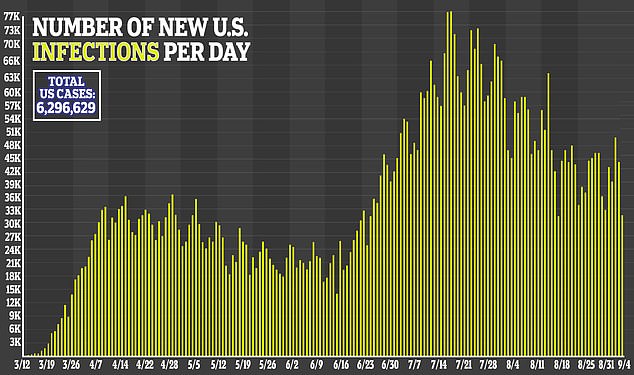 Since travel restrictions have begun lifting and cities are reopening, people have begun taking more flights.

From June through August, between 500,000 to 800,000 travelers were screened by the TSA, however these numbers are still down by about 30 per cent from where they were in 2019, especially considering it was peak summer travel season.

Airlines are scrambling to appeal to the fraction of people who are still willing to travel during the pandemic, particularly as the $25billion government bailout funds they received to help stave off layoffs is ending.

United and other large American carriers have been trying to coax air travelers back to the airports with attractive offers and customer-friendly terms.

Last week, Delta and American joined United in scrapping flight change fees for domestic travel in the US.

Both Delta and American said the elimination of the $200 change fee is effective immediately and will be permanent.

There are now almost 6.3million coronavirus cases in the US and there have been more than 189,000 deaths.

Val Kilmer EXCLUSIVE: High Gun star appears to be like wholesome after throat most cancers battle
Whoopi Goldberg suggests actresses had sex with 'ugly-ass' men to bag movie roles and awards
Final words of Jamal Khashoggi revealed as Saudi prince hears US will hold everyone 'accountable'
Rapper Nipsey Hussle, 33, dead after being 'gunned down' in front of his LA clothing store
Mums can tell how well their child is developing just by smelling them
Tenants across the country vow a rent strike and demand that payments be cancelled
Italy considers psychological testing to determine how long people can endure coronavirus lockdown
Elon Musk's ex-wife denies claims Ghislaine Maxwell procured her as a child bride for the Tesla CEO