A parade of police cars traveling in convey paid a a visit to the lemonade stand of two teenagers who were robbed at gunpoint for their $30 profit – and they forked over more than $20 for a cup.

The Illinois town where the 13-year-olds live has also raised more than $3,500 for them after the August 7 incident where Jude Peterson and Tristan Charbonnel set up the stand outside Peterson’s suburban home in Peoria, before they were held up by two older teens.

The thieves – who were clad in hooded sweatshirts – took off with $30 in profits that Peterson and Charbonnel had made. The incident was caught on a neighbor’s surveillance camera.

Residents of Peoria, southwest of Chicago, were left stunned by the armed hold-up, and have rallied around Peterson and Charbonnel.

Last Tuesday, the boys reopened their lemonade stand, and were inundated with customers. 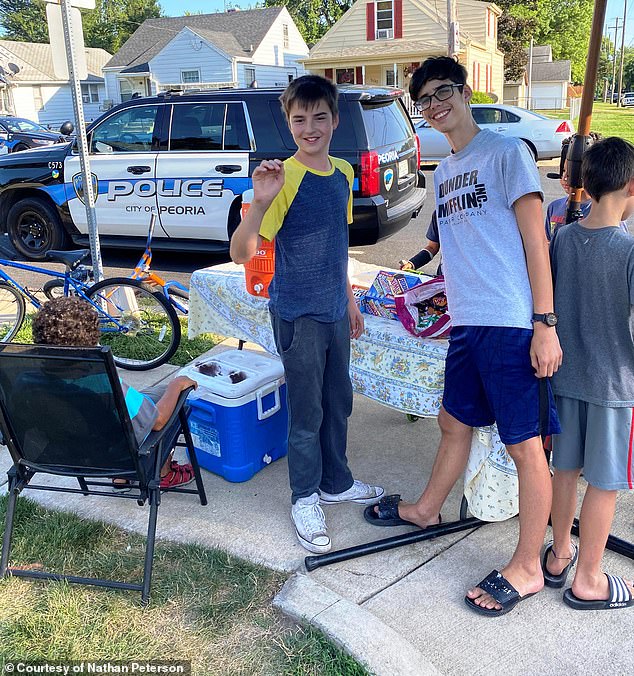 Jude Peterson (left) and Tristan Charbonnel (right) were running a lemonade stand in Peoria, Illinois on August 7 when they were held up at gunpoint 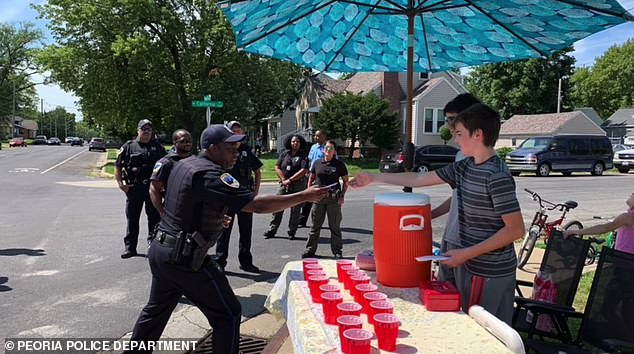 Residents of Peoria, southwest of Chicago, were left stunned by the armed hold-up, and have rallied around Peterson and Charbonnel. Police were seen purchasing lemonade from the boys earlier this week 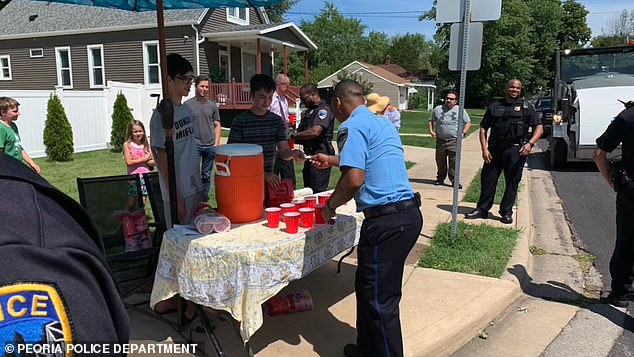 Peterson and Charbonnel’s lemonade stand has seen a significant uptick in business in recent days, as residents stop in to show their support

Surveillance video captured the moment the pair were robbed. One of the thieves (left) can be seen brandishing a gun as he walks toward the lemonade stand. Photo courtesy of

A parade of police cars turned out to purchase drinks from the pair, with cops forking out $20 each for a lemonade.

‘The officers and police chief got out of their cars and talked to the boys and told them how much they supported them. They gave them a donation and took turns buying lemonade. It just made them feel so safe and encouraged,’ Peterson’s father, Nathan, told

‘The robbery itself felt surreal. But the response from the police and community made me so happy… I’m getting teary eyed just talking about it,’ he added. 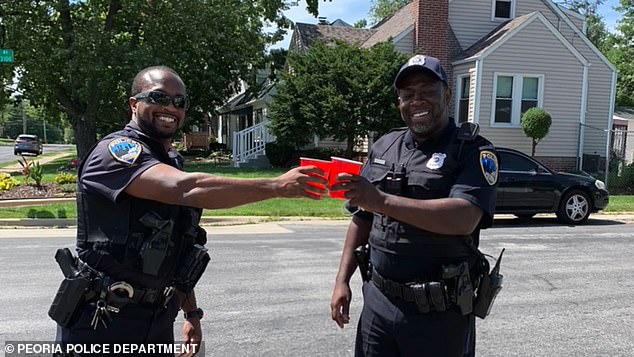 Police paid up to $20 each for a cup of lemonade, helping to show their support for the boys 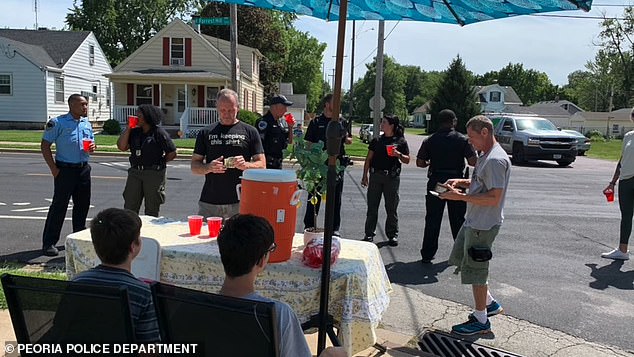 Residents were seen mingling at the re-opened stand last Tuesday

‘The intent of this money comes from a deeper place, just wanting to live in a world that’s safe for a 13-year-old to have a lemonade stand,’ he explained.

Meanwhile, Charbonnel appeared on over the weekend where he talked about the terrifying moment he was held up at gunpoint.

‘It was really surprising, but there wasn’t really time to be scared,’ he stated.

He and Peterson quickly handed over their money tin, which contained $30, and were left uninjured.

The two thieves fled on foot.

Police have not yet made an arrest, but say they are ‘making progress’ on the case. The offenders are expected to be apprehended.

Police are currently investigating the robbery. 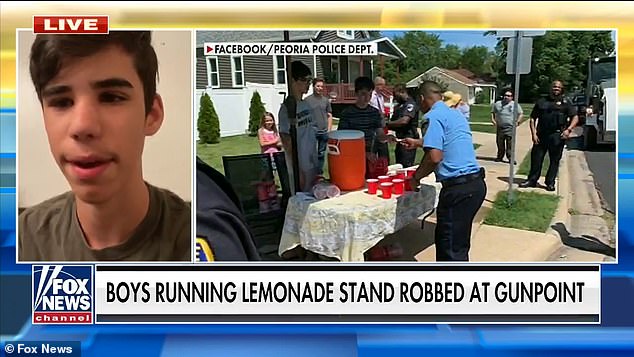 , Charbonnel appeared on Fox and Friends over the weekend where he talked about the terrifying moment he was held up at gunpoint 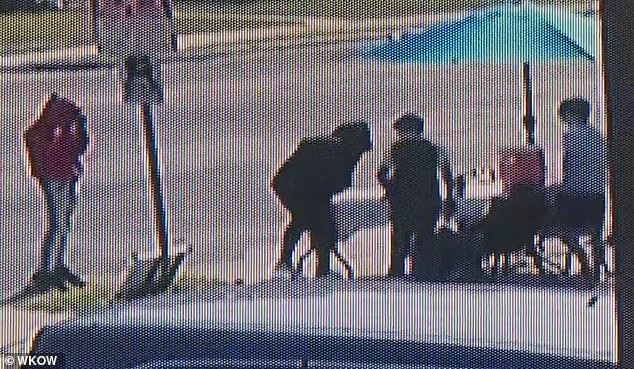 The footage, which was captured from a neighbor’s home, showed the two older boys wearing hooded sweatshirts as they approached from across the street 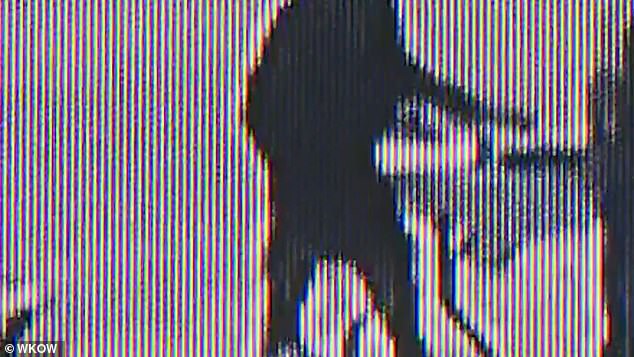 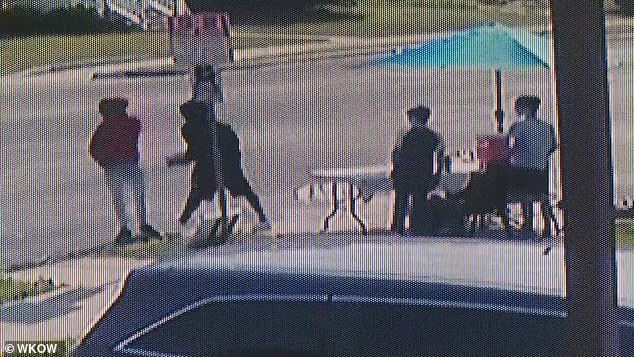