She’s been enjoying some downtime in her Los Angeles home after wrapping up filming for drama web series Hollywood.

And Laura Harrier tapped into full relaxation mode as she enjoyed a sunbathing session by her pool on Monday.

The Spider-Man: Homecoming actress, 30, set pulses racing as she flashed some serious underboob in her tiny bikini set while posing in her garden. 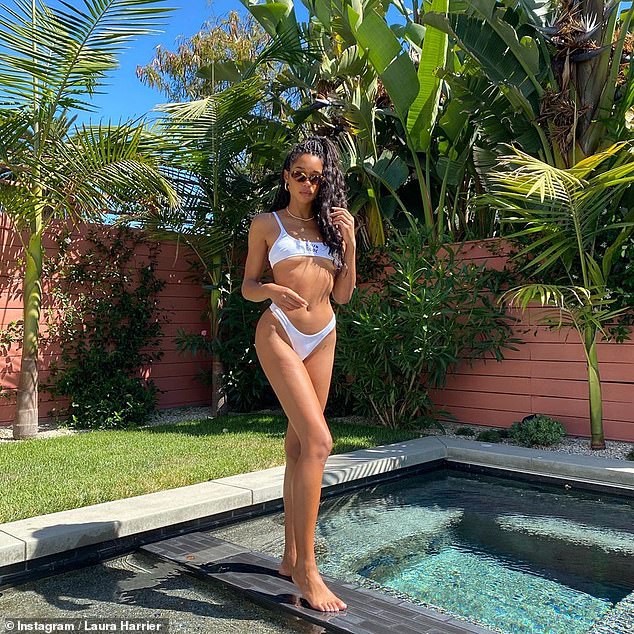 Bikini babe: Laura Harrier tapped into full relaxation mode as she enjoyed a sunbathing session by her pool on Monday

Rock a logo bikini like Laura in Livin’ Cool

The sun has arrived, so now’s the time to invest in some new swimwear, don’t you think?

Even if an exotic getaway isn’t on the cards, you can don your cozzie for a day soaking up the sun in the garden.

If you’re looking for a new set in which to invest, we’d definitely recommend trying this stylish two-piece, as spotted on Laura Harrier this week.

The actress looked incredible in her Livin’ Cool bikini. It’s the labels ‘Wavy’ style and features an on-trend scoop neck design and thong briefs, as well as the brand’s iconic logo across the front.

Sofia Richie, Emily Ratajkowski and Hailey Bieber have all been spotted in Livin Cool’ pieces, so Laura is certainly in great company wearing this bikini!

If you’re as obsessed with the skimpy style as we are, then click (right) to shop the set for yourself.

Highlighting her enviable figure, the Chicago native was dressed in a white two-piece, which featured a barely-there bralet and matching briefs.

Former model Laura wore her braided tresses in a half up half down style and accessorised with animal print shades, hooped earrings and a gold necklace.

The cheeky screen star captioned her post: ‘attempted to think of a caption but let’s be honest we all know what this is.’ (sic) 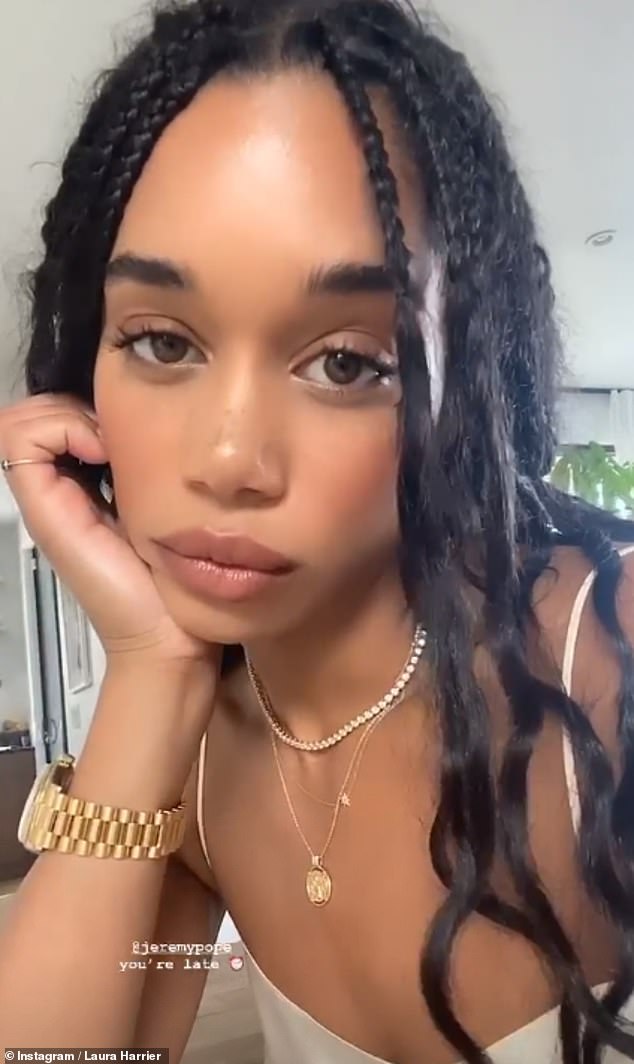 ‘You’re late!’ Later into the day, the Spider-Man: Homecoming actress, 30, revealed she was waiting for her pal Jeremy Pope as they prepared to go out

Laura’s social media post came after she praised Marvel for casting both her and Zendaya in Spider-Man: Homecoming and not making it ‘about our blackness’.

The media personality played Peter Parker’s love interest Liz in the blockbuster film while the former Shake It Up star, 23, starred as his classmate, Michelle ‘MJ’.

Speaking to NET-A-PORTER’s digital title, , the thespian admitted she was surprised to learn she was still in the running for another role after she learned Zendaya was starring in the movie.

She explained: ‘After I did my screen test for Spiderman, before I had heard anything, it came out a few weeks later that Zendaya was going to be cast in it, so I just figured I hadn’t got the job. She must have.

‘I called my agent and they reassured me I was still in the running. I thought it was incredible and ground-breaking of Marvel to put us both in those roles and not to make it about our blackness.

‘We were just girls who went to a school in New York and that’s what New York City looks like; films should reflect that. We had the best time making that movie. Zendaya and I are friends now and I’m really grateful for her.’