And the 48-year-old has revealed the special message she gave the iconic Mean Girls actress after her replacement was announced.

Speaking to  this week, Dannii said: ‘We let Lindsay know we’re gutted she’s not there [on the show this season].’ 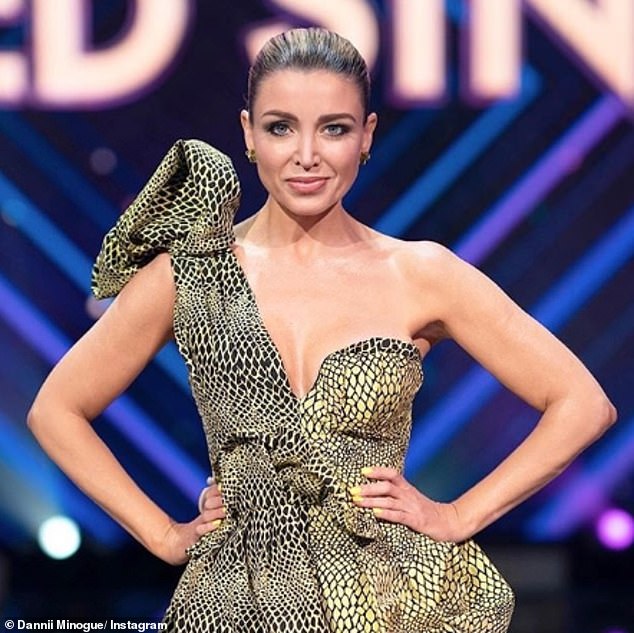 The Masked Singer’s Dannii Minogue, 48, (pictured) reveals what she told Lindsay Lohan after she was replaced on the seres during an interview with The Sunday Telegraph this week

‘We really bonded and have all kept in touch with her the entire time since the show.’

The pop singer went on to say that the team have welcomed The Parent Trap star’s replacement Kiwi comedian Urzila Carlson with open arms.

‘We didn’t want Urzila to feel that she wasn’t part of the team. So there’s been phone calls and messages, we want to build up a friendship and trust,’ she said. 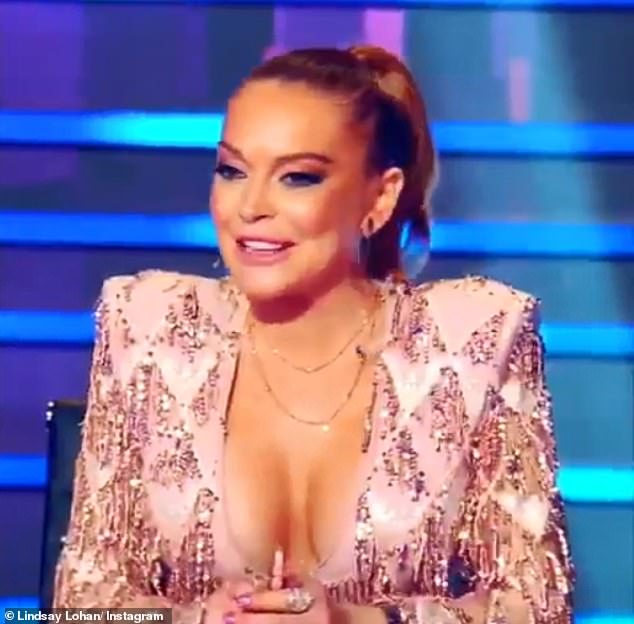 Speaking to The Sunday Telegraph this week, Dannii said: ‘We let Lindsay know we’re gutted she’s not there. [on the show this season].’ Pictured: Lindsay Lohan

Dannii went on to say how impressed she was with Urzila’s ability to see the ‘funny side’ of things and admitted she brought that on the panel.

Hollywood star Lindsay Lohan was a massive draw card for the show last year, however, due to COVID-19 restrictions production was forced to find a replacement.

Speaking to KIIS FM’s The Kyle and Jackie O Show in October, Dannii spoke of how she was unsure if she and Lindsay would become friends. 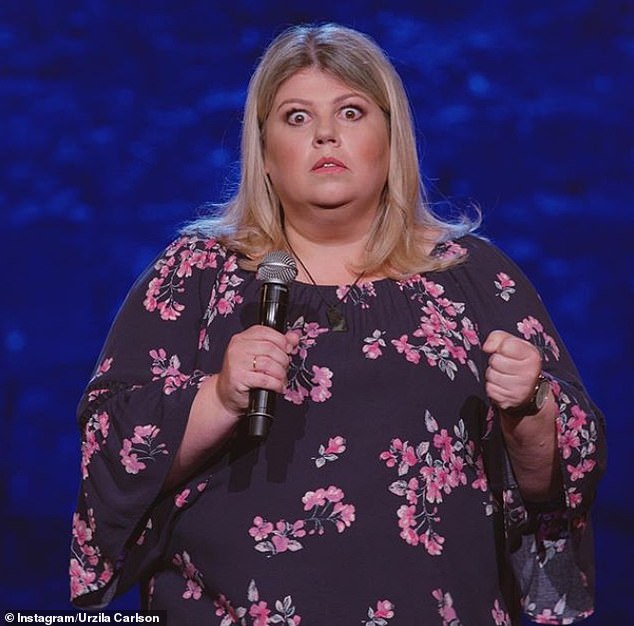 Replacement: ‘We didn’t want Urzila to feel that she wasn’t part of the team. So there’s been phone calls and messages, we want to build up a friendship and trust,’ Dannii said

However, in a separate Daily Telegraph interview, she spoke of how they struck-up their unlikely friendship during production of the show.

‘Her hairdresser had brought along all these wigs and at one point she turned to me and said: “do you want to try on some wigs?”‘

‘We all put one on, including Dave (Hughes)… and it’s now one of my most favourite moments of anything we did together,’ she said. 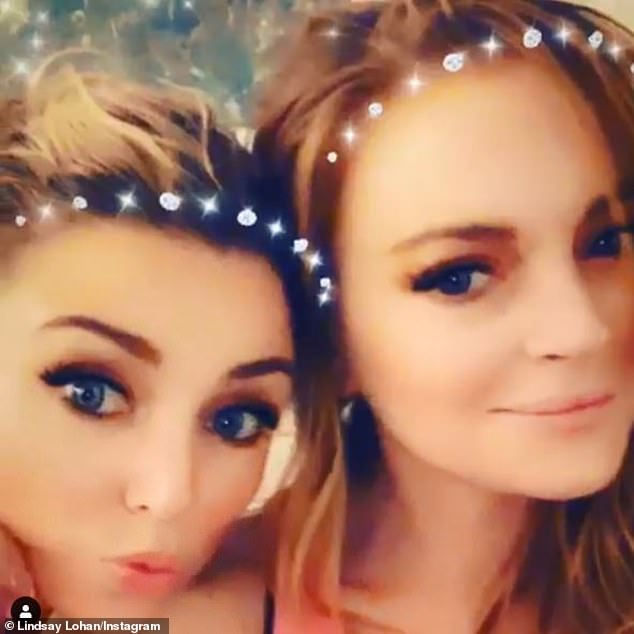 Best friends: Speaking to the Kyle and Jackie O show prior to filming Dannii said she wasn’t sure if she would like the Mean Girls star ‘until I get there’. But they soon bonded on set

The former Young Talent Time star also recalled the moment she reached out to the actor in a sisterly heart-to-heart.

Dannii, who has also been in the spotlight since childhood, said she explained to the American star that she empathised with her journey through child stardom.

‘I said to her, “I want you to know that I read that you started when you were five and I started at seven. Not many other people will have done that or know what you’ve been through,”‘ Dannii said. 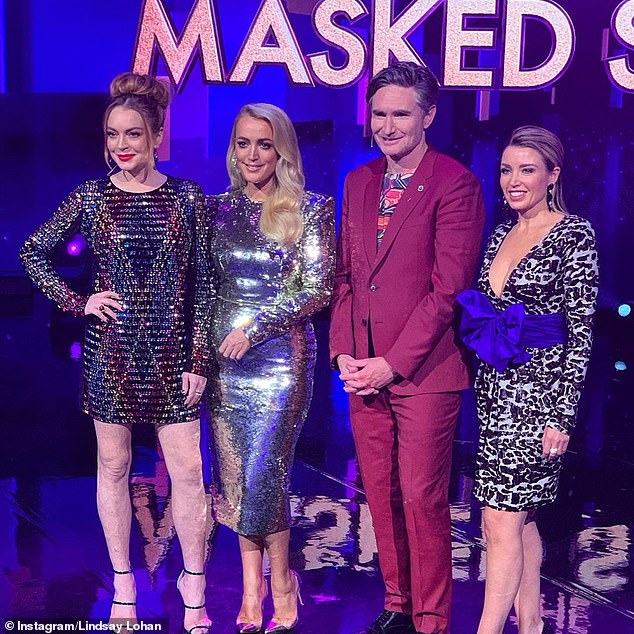 Old team: Dannii said she wanted Lindsay to feel safe during in Australia and to have fun while filming last season on the show. Also pictured: Judges Dave Hughes and Jackie ‘O’ Henderson

‘I just wanted her to know, “Hey, I totally get it and I’m not going to judge what’s out there because I wouldn’t want people to do that to me either,”‘ the singer added.

The former X Factor judge said she wanted Lindsay to feel like she was safe in Australia and that she could have fun on the show last season.

The relationship has since blossomed with Lindsay referring to the singer being a ‘big sister’ during filming.

The Masked Singer Australia’s second season will premiere on Monday, August 10 from 7.30pm on Channel 10 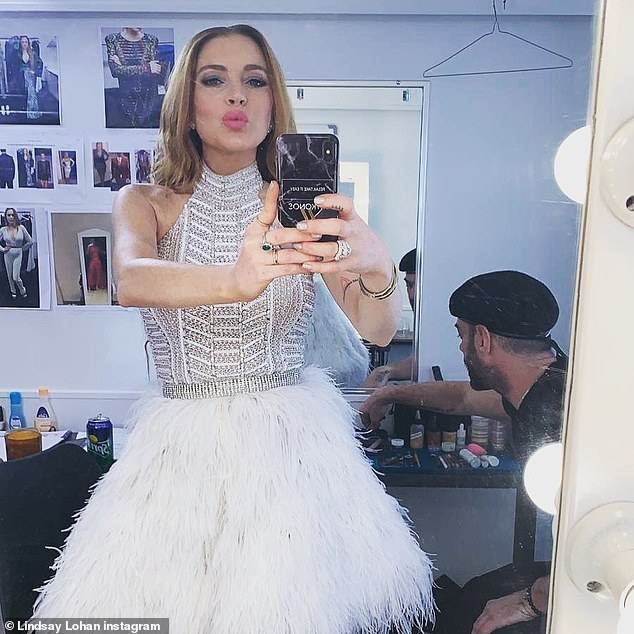 Coming soon: The new season of The Masked Singer Australia will premiere on Monday, August 10 from 7.30pm on Channel 10 without Lindsay Lohan (pictured)

Mary Poppins Returns: Kelly Brook displays her voluptuous curves in form-fitting blush pink gown
Katy Perry dons a flamboyantly bright jumpsuit and matching jacket in London
EX-TOWIE star Georgina Cleverley reveals her honed frame in striped bikini
Kate Moss looks effortlessly glam as she cosies up to beau Count Nikolai Von Bismarck
Ashley Roberts displays her toned abs in a floral bikini as she wraps her head in a towel in Ibiza
Alesha Dixon announced as new judge on America's Got Talent
Whitney Port wears a funny face mask emblazoned with red lips as she steps out for a coffee
Cassie shows off her envy-inducing abs as she unveils her dramatic post-baby body transformation