A British couple who are set to be among the first tourists returning from to be hit by the new two-week quarantine have blasted the ‘ridiculous’ government u-turn on travel.

Sophie Ingham, 23, and her boyfriend Nick Baldwin flew out to Tenerife a week ago after government guidance announced that travel to Spain was permitted again.

Now though, the couple are set to be among the first people returning to Britain from Spain who will have to quarantine for two weeks after Spain saw a spike in cases.

Speaking to MailOnline Sophie after the Government announced their bombshell travel u-turn, Sophie said: ‘We were shocked. 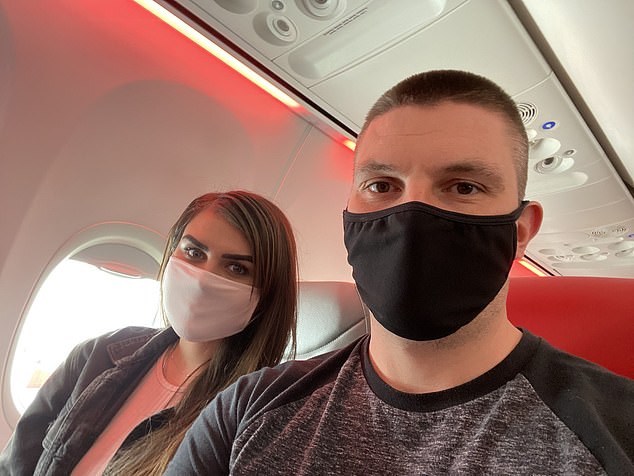 Sophie Ingham, 23, and her boyfriend Nick Baldwin flew out to Tenerife a week ago after government guidance announced that travel to Spain was permitted again 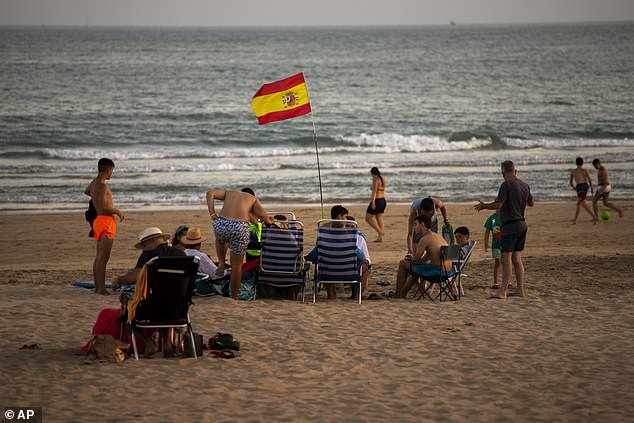 Bathers enjoy the beach in Cadiz, south Spain, on July 14

‘I think it’s ridiculous, we’ve only been here a week and we’ve followed all the rules. We have worn masks when we needed to and not been close to anyone other than each other.

‘We don’t even know if it definitely includes us as it is just mainland Spain that is suffering a second spike, so does this include the islands?

‘It’s all unclear and upsetting as we really cannot quarantine.’

Her boyfriend Nick owns his own business and Sophie said that he can’t afford to be quarantining for two weeks when they return home.

The couple are now waiting at the airport in Tenerife and expect to take off at 10.05pm local time, to arrive at Leeds airport for 2.50am tomorrow morning.

However, despite the government putting the new quarantine rule in place, Sophie said that she has not been provided with any guidance.

‘No one has a word to us at all. It’s very bad. Loads of British people now worries in airport and refreshing the news.’

Sophie said that the Government was in a tough position and couldn’t win either way by imposing the quarantine rule but that she feels like British tourists have been left out to dry.

She said: ‘It’s a difficult one because I don’t think Boris or the government could win either way. 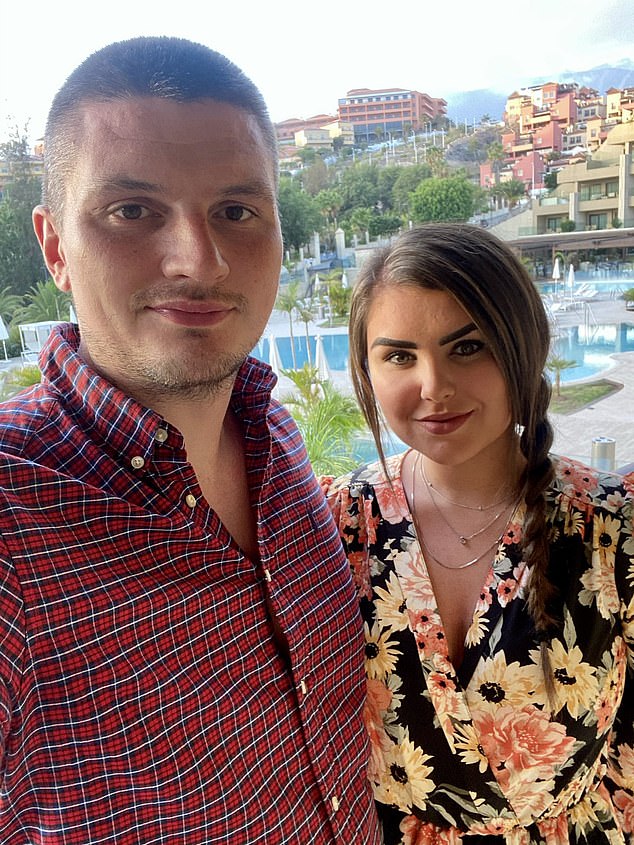 ‘I think implementing this quarantine without giving people enough notice to get home is completely unfair.

‘Spain’s cases have been increasing for the past few days, the government have allowed families to travel in the past two days as the summer holidays have begun.

‘Only to implement a lockdown 48hours later? It makes no sense.

‘The government knew the risks when they opened the air bridges and now they are hanging travellers out to dry when a lot of people will not be able to quarantine.

‘However, If he doesn’t implement a quarantine and a second spike hits the UK then he will be criticised. I just think he should have warned people or at least allowed them time to bring flights forward.’ 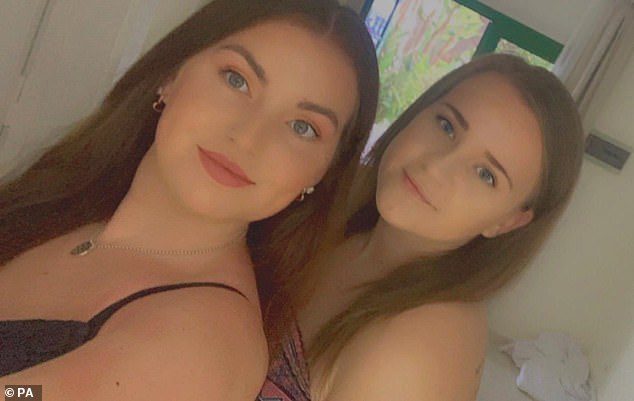 Chloe Harris (right), 23 from Kent, booked a last-minute trip to Lanzarote and arrived on the Spanish island this morning

Chloe Harris, 23 from Kent, booked a last-minute trip to Lanzarote and arrived on the Spanish island this morning.

She told the PA news agency: ‘At the moment we are just waiting to hear whether the quarantine will affect the Spanish islands or if it is just going to be the mainland.

‘When I heard the news I was quite shocked because I thought they would have given us some warning. Even just some warning that this was something they were going to consider.

‘We only booked the trip on Wednesday and we are only here for a few days. We had done our research and we knew that the island has only had a small number of Covid cases.

‘I think a lot of people are going to rush to the airport, but because we are only here for four days, and we only arrived this morning, it doesn’t seem worth it. We are just going to wait and hear if the island is included in the quarantine.

‘I would probably be fine to continue working from home and quarantine from home, although I would have to stop going into the office. However, my friend who I travelled with is due to start a new job on August 3 and so that’s going to be difficult to explain to her employer.’

British holidaymakers are cancelling their trips to Spain amid fears they will be forced to go into a 14-day quarantine when they return to the UK.

Sun-seekers fear the UK government may scrap its air bridge agreement with Spain amid growing concerns of a second spike.

Such a move would leave holidaymakers out in Spain facing two-weeks of self-isolation on their return to the UK – even though they wouldn’t have had to at the time of leaving.

It comes as the Foreign and Commonwealth Office today cut its three-weekly review of the 74 air bridges to just a week, while health officials in Spain have raised concerns over a second coronavirus spike.

One holidaymaker, Lynn Carratt, 39, says she has cancelled her trip to Spain fearing the government will take the country off the air bridge list when it reviews the scheme on Monday. 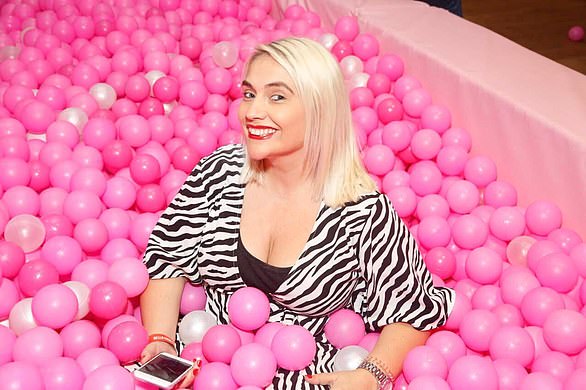 One holidaymaker, Lynn Carratt (pictured), 39, from London, says she has cancelled her trip to Spain fearing the government will take the country off the air bridge list when it reviews the scheme on Monday

Mrs Carratt, who is from London and is the director of PR firm E20 Communications, was due to fly to Majorca tomorrow for a week-long holiday with her husband, but has now swapped her flights from Spain to Greece.

She told MailOnline: ‘It is a worry. When the air bridges come up for review on Monday it does look like Spain is one of those countries that is a risk.

‘We didn’t want to be on holiday and on Monday Spain is taken off the list and then we will be forced to quarantine for two weeks.’

The couple will instead fly out to Crete tomorrow – just a year after they married in the Greek island of Santorini.

She added: ‘Greece only had something like 27 cases today across the mainland and the islands. Spain had 2,615 yesterday.

‘Anyone can catch coronavirus, it is just about being sensible and the right measures and protection to keep yourself safe.’

Another holidaymaker told MailOnline: ‘We were supposed to be in Spain now.

‘We had a month trip booked to spend with our daughter and son-in-law that lives out there.

‘But we cancelled it and even then when the air bridge was put in we did not re-book as fears because of this and obviously not wanting to risk catching coronavirus.’

Woman posts rant on photo of a woman breastfeeding in a restaurant – but all is not what it seems
Safaricom faces $4.5 mln fine for failing to connect...
Brexiteers vow to rebel over laws on Northern Ireland in a show of force just days before the Budget
MAC on... Theresa May's Brexit battles
Inside the famed Chateau Marmont, where actors Anthony Perkins and Tab Hunter began a secret affair
How these children's fight against the curse of discarded rubbish earned them a £1,000 reward
Vandals cover Plymouth Rock in red graffiti
Madeleine McCann investigators resume digging at German allotment