A teenager was fatally stabbed on a bus after ‘school beef chat’ on social media, a court has heard.

Baptista Adjei, 15, was fatally attacked as he travelled with a group of friends to Stratford in east on the afternoon of October 10 last year.

The attack followed an argument between students from two schools ahead of a football match between the rivals.

When the bus the group was travelling on pulled up, another youth boarded wearing a blue latex glove and carrying a ‘vicious looking’ hunting knife, the Old Bailey heard. 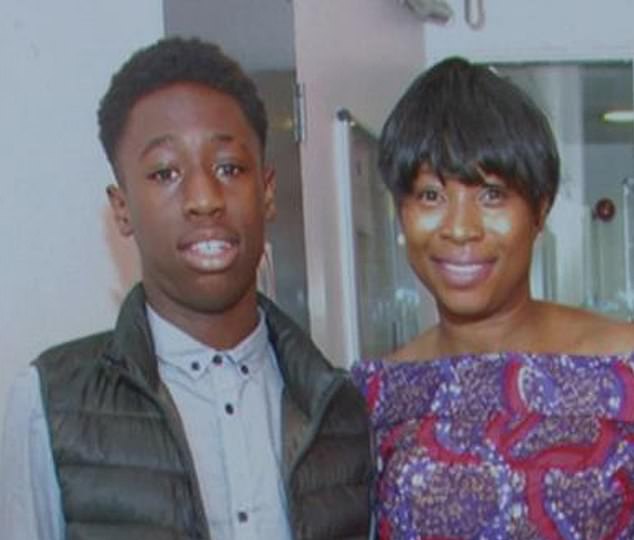 Baptista Adjei, 15, (pictured left with his mother Josephine Frimpong) was stabbed and killed on October 10 last year while he was travelling on a bus with a group of friends

The youth attacked Baptista with the 10 inch long blade, stabbing him in the chest twice, puncturing his lung and heart, jurors heard.

Mortally injured, the boy got off the bus and ran away but collapsed on the ground near a McDonald’s restaurant.

Another boy was also stabbed in the arm and leg but survived, jurors were told.

He later told police that the stabbing had followed some inter-school banter on Snapchat a couple of weeks before.

He said the ‘school beef chat’ had started out in fun ahead of a football match. 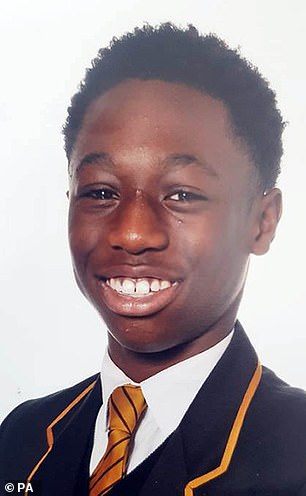 A youth had sent Baptista a message saying: ‘If you’ve got no bodies on your blade, leave the group chat,’ the court heard.

Baptista allegedly replied: ‘Shut up. You’ll be the first.’

The youth who had allegedly sent the message to Baptista is one of two 16-year-olds from east London on trial for his murder.

Prosecutor Crispin Aylett QC said the teenager who wielded the knife had admitted the manslaughter of Baptista and unlawful wounding of the other boy.

But he has denied the more serious alternative charges of murder and wounding with intent.

Mr Aylett said: ‘The prosecution suggest that in stabbing Baptista twice in the chest in each case to the depth of five inches and puncturing separately the lung and heart you may think (the defendant) must have intended at least to cause Baptista really serious harm.

‘The knife that had been used was found to have a blade that was 10 inches or 25 centimeters long.’

The second defendant accepted he was on the bus, having tapped in with his Oyster card and been caught on CCTV, the court heard. 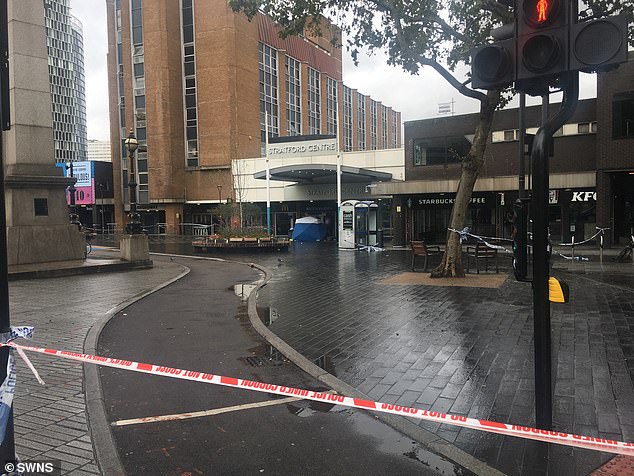 Adjei got off the bus and ran away but collapsed on the ground near a McDonald’s restaurant. Above, the scene in Stratford where the 15-year-old was stabbed to death

Mr Aylett said the case against him was that he ‘tipped off’ the other defendant knowing what he was going to do.

He added: ‘In other words they were in this together.’

The second defendant denies all the charges.