Almost 900,000 public sector workers will be given an inflation-busting pay rise as a reward for their service during the coronavirus pandemic.

Teachers and doctors will enjoy the biggest pay rises of 3.1 per cent and 2.8 per cent each, which ministers said today was in recognition of their ‘efforts on the frontline during the battle against Covid-19’.

This followed a 2.75 per cent rise for teachers last summer, and a 2.5 percent increase for doctors. Inflation in June stood at 0.8 per cent, according to the Consumer Prices Index.

But today unions questioned why social care workers had not been included in the pay increases, which will also benefit soldiers, judges, civil servants and police officers.

More than 300  workers have died in England alone after contracting the deadly virus, including 131 social care workers. Thousands of teachers have not been in the classroom since March, although many have continued going into school to teach key workers or taken lessons from home.

Nurses are not included because they have already agreed a separate pay deal in 2018. This will see them receive a third annual salary increase of 1.7% in 2020-21. Junior doctors and GPs have also previously concluded a separate salary scheme. 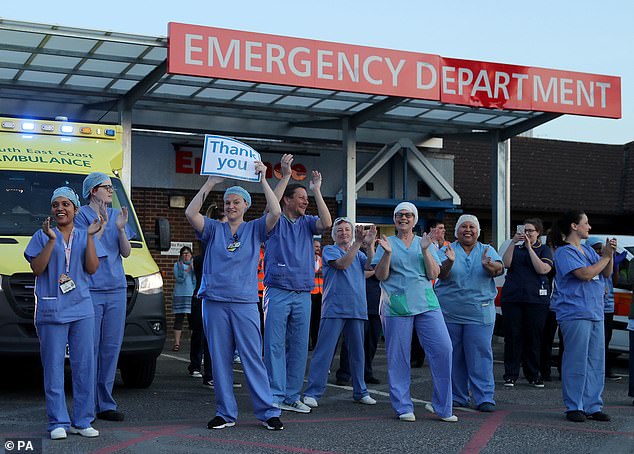 More than 300 NHS workers have died in England alone after contracting the deadly virus. Doctors will see the largest increase after teachers, with 2.8% (pictured: Doctors, nurses and NHS staff outside the William Harvey Hospital, in Ashford, Kent, to salute local heroes during Thursday’s nationwide Clap for Carers)

TUC general secretary Frances O’Grady called for social care workers to join the ranks of those being offered a pay rise.

‘These rises are welcome, but there’s still a long way to go to restore pay after a decade of real terms cuts,’ she said.

‘Many public sector workers, like job centre staff and local government workers, aren’t getting these rises. They deserve a decent pay settlement too.

‘And the Government should urgently announce a pay rise for social care workers, who put their lives on the line to care for others during this pandemic.’

Policing minister Kit Malthouse today said social care workers would have to rely on increases in the minimum wage to improve their pay levels as the vast majority are in the private sector.

He told BBC Radio 4’s Today programme that – apart from ‘nationalising the entire thing’ – the minimum wage rate was the best tool the Government had to recognise the efforts of care workers.

‘What we have done is raise the level of the minimum wage very significantly over the last few years to get it up towards the £10.50 mark. That, we hope, will push through into these private sector jobs.

‘Everybody looks at people who work in social care during coronavirus and thinks they have done a fantastic job in very, very difficult circumstances.

‘But that’s the mechanism by which we think we can increase pay in that sector.’

Each award is recommended by independent pay review bodies, and this year the Government has accepted the suggested rise for each workforce.

Police, prison officers and National Crime Agency staff will be given a 2.5% rise in pay as a result and members of the armed forces will receive a 2% uplift.

Meanwhile, members of the judiciary and senior civil servants will also see their pay topped up by 2%.

The pay awards for the armed forces, prison officers, senior civil servants and NHS staff will be backdated to April, whereas the pay rise for police and teachers starts in September due to those professions operating on a different pay schedule running from September to August.

Chancellor Rishi Sunak said: ‘These past months have underlined what we always knew, that our public sector workers make a vital contribution to our country and that we can rely on them when we need them.

‘It’s right therefore that we follow the recommendations of the independent pay bodies with this set of real-terms pay rises.’

Labour shadow chancellor Anneliese Dodds said the pay rise was ‘good news’ but claimed it would not make up for a ‘decade of real-terms pay cuts’ for frontline workers. 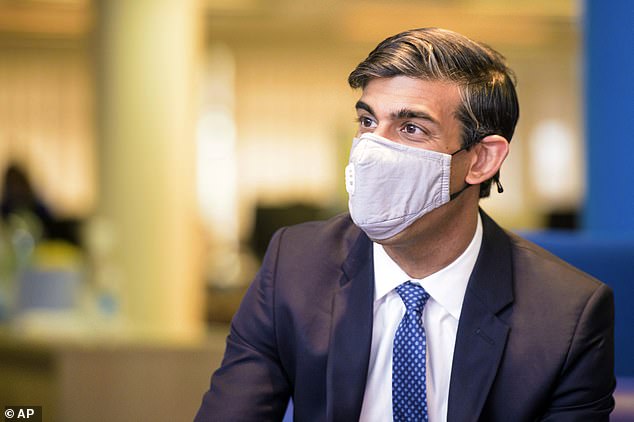