The Government’s top scientific adviser today dealt a hammer blow to Boris Johnson’s hopes of persuading workers to return to their offices as he said there is ‘absolutely no reason’ to change the current work from home guidance.

Sir Patrick Vallance said the UK is ‘still at a time when distancing measures are important’ and that working remotely ‘remains a perfectly good option’.

He then went even further as he said many companies had found working from home had not been ‘detrimental to productivity’ and as a result there is no need to move away from the policy.

The Prime Minister is expected to use a Downing Street press conference tomorrow evening to urge people to physically return to their places of employment and to use public transport to do so.

The Government is increasingly concerned about the impact continued working from home could have on the nation’s economic recovery as many city and town centres remain deserted.

But Sir Patrick’s comments will increase pressure on the Prime Minister to set out exactly why he believes it is safe for people to return to something more like normal life.

Meanwhile, Sir Patrick also delivered bombshell interventions on the timing of the UK’s lockdown and of the Government’s overall performance during the pandemic.

England’s chief scientific adviser said lockdown measures should have been introduced a week earlier while the outcome of the pandemic ‘has not been good for the UK’.

He also told MPs on the Science and Technology Committee that researchers have been in favour of the wearing of face masks since April. 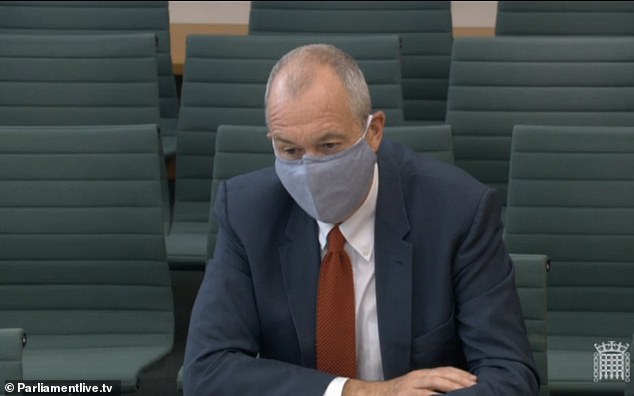 Sir Patrick used his appearance in front of the committee this afternoon to deliver a number of interventions which are likely to increase tensions between the Government and its top advisers.

But the timing of his comments on the issue of working from home are likely to have caused raise eyebrows in Number 10 given the PM is due to rip up the current guidance at a briefing tomorrow.

Here is a breakdown of the key points made by Sir Patrick.

The chairman of the Science and Technology Committee Greg Clark asked Sir Patrick directly if he believed ‘people should no longer work from home if they are not vulnerable or living with vulnerable people’.

Sir Patrick replied: ‘My view on this, and I think this is a view shared by SAGE, is that we are still at a time when distancing measures are important and of the various distancing measures working from home for many companies remains a perfectly good option because it is easy to do.

‘I think a number of companies think it is actually not detrimental to productivity and in that situation absolutely no reason I can see to change it.’

Number 10 is believed to be increasingly concerned about the economic impact of working from home.

Bank of England Governor Andrew Bailey told Tory MPs last night that a ‘fear’ of commuting is ‘holding back the recovery’ and that shops, restaurants and cafes needed returning customers.

Mr Johnson is expected to tell people tomorrow that it is now safe for more workers to return to their offices.

The economic impact of working from home was raised with Sir Patrick by Mr Clark.

The expert said that it was not for the Scientific Advisory Group for Emergencies (SAGE) to weigh in on the economics of the coronavirus crisis and that ultimately further reopening the UK economy would be a decision for ministers to weigh up.

However, he warned that the spread of coronavirus is ‘dependent on contacts so the more contacts you have at close range the more likely this is to spread’.

He said: ‘We haven’t been asked specifically to look at that question but it clearly is part of the assessment and that is where the integration of the economic, business and science comes together. I have certainly been involved in those discussions.

‘That is exactly what is going on in the Cabinet Office, the Treasury and those things are fed into the decision making process.

‘SAGE can’t advise on that. The principles of this in a way are quite easy, which is the likelihood of the spread of the virus is dependent on contacts so the more contacts you have at close range the more likely this is to spread and that principle underpins a lot of the advice.

‘But then clearly the decision for all the reasons we have talked about including economic impact of this and the impact of that on health need to be integrated in terms of final policy decisions.’

Riot police clash with protesters
Bride-to-be, 30, who drowned on a hen party will be buried in the wedding dress
Boris Johnson could dare Tory Remainer rebels to topple him over No Deal
Boris publishes his Brexit Withdrawal Bill - 110-page document - just hours before MPs will debate
Woman, 26, set to marry a man that encourages her to eat 10,000 calories a day
British captive Nazanin Zaghari-Ratcliffe's husband warns time is running out
'Self-cleaning' products claim to help fight off viruses, reviewed
Britons enjoy one final late night out before Boris Johnson's 10pm closing time comes into force