What is Rishi Sunak expected to announce in his mini-Budget?

Homeowners to receive £2bn in financial incentives to insulate homes.

Schools, hospitals and other public buildings to get £1bn to make them greener and more energy efficient.

Some £50m to fund retrofitting of social housing with insulation, double glazing and heat pumps.

Rishi Sunak will not delay a stamp duty cut slated for his mini-Budget tomorrow after warnings that the housing market would be wrecked for months.

The Chancellor’s crucial coronavirus recovery package is expected to include a six-month ‘holiday’ from paying the charge on most homes to kickstart the market.

However, economists voiced alarm at the idea that the move could be announced to the House of Commons, but not implemented until the Autumn.

Fears were raised that purchases would grind to a halt as people would simply wait in order save thousands of pounds.

Sources told MailOnline that there would not be any delay in the implementation of a stamp duty cut.

Treasury officials have been looking at a temporary six-month increase in the stamp duty threshold from the current level of £125,000 to an amount between £300,000 and £500,000 to stimulate demand.

But economists and property experts warned that a delay until Autumn, as had originally been mooted, could put the housing market into the deep freeze.

The stamp duty move is expected to be the centrepiece of Mr Sunak’s financial address tomorrow as he sets out his vision for the recovering UK economy.

Announcements are also expected to include £2 billion for homeowners to spend on better insulating their homes and £1 billion to make schools and hospitals greener.

Mr Sunak is under mounting pressure to announce a fresh wave of financial support for British businesses as many sectors of the economy continue to struggle. 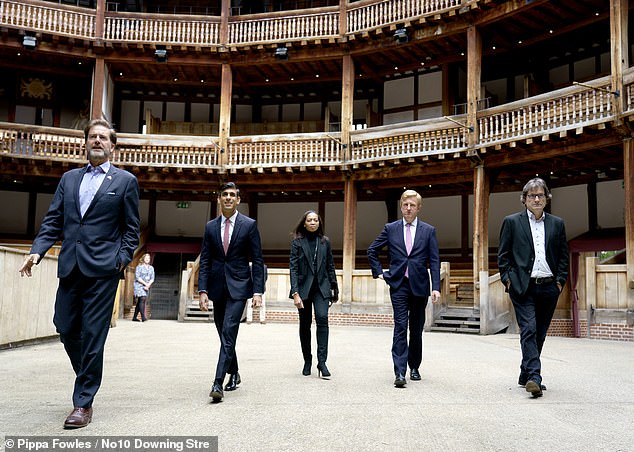 Rishi Sunak, pictured during a visit to Shakespeare’s Globe theatre yesterday, is considering a six-month stamp-duty ‘holiday’ on most homes to kick start Britain’s dormant market 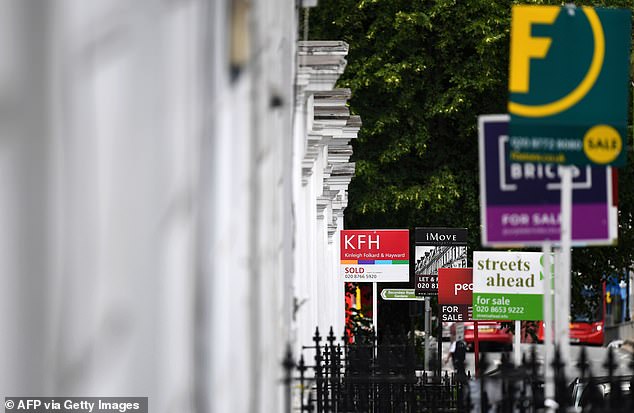 What are the current rules on stamp duty?

Stamp duty must be paid when people buy residential property over a certain price.

The current property value threshold at which stamp duty must start to be paid is £125,000.

But there are different rules for first time buyers if the property is worth less than £500,000.

The amount of stamp duty paid gradually increases based on the value of the property.

For more expensive properties, stamp duty at 10 per cent is charged on the following £575,000 and anything above a property value ceiling of £1.5 million is charged at 12 per cent.

Paul Johnson, of the Institute for Fiscal Studies, said any uncertainty about a potential change to stamp duty rules would distort the housing market by encouraging people to delay their decisions.

He said Mr Sunak must choose to either launch the duty holiday tomorrow – or decisively rule it out.

‘To do otherwise could ruin the housing market for months to come,’ said Mr Johnson.

Economist Julian Jessop urged the Treasury to ‘stop flying kites’ over potential cuts in both stamp duty and VAT.

He said: ‘The announcement of a stamp duty holiday, but not until the autumn, could kill the housing market in the meantime.

UK house prices fall for four months in a row

House prices have been falling for four months in a row – marking the first time this has happened since 2010.

Property values in June were 0.1 per cent lower than in May, according to a an index published by Halifax.

Despite four months of prices edging downwards, house prices were actually higher in June when compared with a year earlier.

Across the UK, property values in June were 2.5 per cent higher than in the same month a year ago.

‘Though only a small decrease, it is notable as the first time since 2010 – when the housing market was struggling to gain traction following the shock of the global financial crisis – that prices have fallen for four months in a row.

‘Activity levels bounced back strongly in June, which is typically the busiest month for mortgage activity in the UK.’

‘There has been similar speculation of an across-the-board VAT cut, which could delay spending on other big ticket items too.’

But he said that ‘history tells us’ such a move would simply shift demand in the short term rather than actually increase it.

‘But I think the Treasury officials who will have been working up all sorts of proposals for him during the lockdown will be telling him that the history tells us that cutting VAT or cutting stamp duty can bring forward demand but it doesn’t overall increase the level of demand, it simply shifts the pattern of it.’

Mr Hammond said cutting stamp duty was undoubtedly ‘one tool in his tool box’ which Mr Sunak could choose to use tomorrow.

He said: ‘Clearly, if people are told that a stamp duty holiday is coming in the autumn people will not complete house purchases ahead of the autumn if they can possibly avoid it.

‘That doesn’t mean to say that sales activity won’t pick up but people will want to time their completions beyond an autumn budget if that is what the Chancellor is signalling.

What is Rishi Sunak likely to announce on stamp duty?

Treasury officials have been working on plans to introduce a temporary six-month increase in the stamp duty threshold.

It was originally thought the change could be announced tomorrow but not rolled out until the autumn.

But concerns the delay could result in the housing market grinding to a halt as people wait for the discount mean the change is likely to be implemented immediately.

‘It is one tool in his tool box. He has many tools available to him. If he is clear eyed about what he is doing he would be pulling forward and to some extent pushing back from now into the autumn and pulling forward from next spring demand that would otherwise would have happened then.

‘If that is what he wants to do then a temporary cut in stamp duty could be one of the tools that would help to do that.’

Mr Hammond’s comments came as an index showed house prices have been falling for four months in a row – the first time this has happened since 2010.

Halifax said that property values in June were 0.1 per cent lower than they were in May.

However, despite four months of prices edging downwards, house prices were actually higher in June when compared with a year ago.

Across the UK, property values in June were 2.5 per cent higher than in the same month a year earlier. The average house price in June was £237,616.