Leicester’s coronavirus infection rate is continuing to fall — but the local lockdown there must run for another 11 days before officials consider lifting it, Matt Hancock today revealed.

The Health Secretary said in the House of Commons today that the seven-day rate of infection in the East Midlands city has dropped from around 135 to 117 new cases per 100,000 people.

He said the 13 per cent decline was ‘good news’ but the city must remain in its local lockdown — which began last week — until at least July 18, when health chiefs first promised it would be re-evaluated.

Leicester was the first place in Britain to have local restrictions enforced to tackle a surge in Covid-19 cases, now thought to be linked to working conditions in clothes factories.

Schools and non-essential shops were ordered to close again last week and people again prevented from meeting up in groups or going to others’ houses.

‘Since then we’ve been working with Leicester and Leicestershire and I’m pleased to say that, together, we have brought down the seven-day infection rate from 135 to 117 cases per 100,0000 people.

‘What we said when we took the measures just over a week ago is that we needed to see 14 days of data, so we propose to make announcements on the next steps on the 18th of July.

‘Of course, if further measures are needed in the meantime to tighten up then we will take them immediately, but… the good news is that the data are currently moving in the right direction.’ 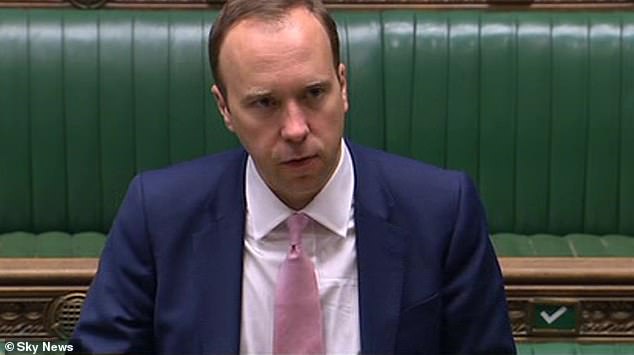 Health Secretary Matt Hancock said in Parliament today that the seven-day rate of infection in the East Midlands city has dropped from 135 to 117 per 100,000 people

Mr Hancock said he would not put a number on how far the infection rate had to fall before the lockdown would be lifted.

His counterpart, Labour’s Shadow Health Secretary Jonathan Ashworth, said in Germany officials use a benchmark of 50 cases of Covid-19 per 100,000.

Mr Hancock replied: ‘We’re not going to use or give a specific figure because both the level and the rate of change matters.

WHICH LOCAL AUTHORITIES HAVE HIGHEST RATES OF COVID-19 INFECTION? (Data from June 28)

‘If the level were lower but it was going up, that could be a worse situation than a higher level that is under control and falling. So you’ve got to look at both the level and the rate of change.’

Leicester went into lockdown when figures from July 2 showed it had an infection rate of 141 Covid-19 cases per 100,000 people – three times higher than the next highest local area.

As well as police and Public Health England medical officials, a team of behavioural scientists have been deployed to provide advice if social distancing is not adhered to.

A blame game between local and central government has been raging for the past fortnight, with the mayor of the city, Sir Peter Soulsby, complaining that figures for both positive and negative test results, along with ethnicity and workplace, broken down by postcode, were not coming through.

‘We’ve asked repeatedly but have just been told we’re being given all we need,’ he said.

A PHE report into the spike revealed it could be partly due to the growth in the availability of testing.

In his speech in the Commons today Mr Hancock also praised the actions of three pubs in England which closed after customers tested positive after ‘Super Saturday’.

The Lighthouse in Burnham-on-Sea, Somerset; the Fox and Hounds in Batley, West Yorkshire; and The Village Home in Gosport, Hampshire, were ‘doing the right thing by their customers and by their communities’, he said.

Mr Hancock said: ‘This is NHS Test and

Trace working precisely as intended. Three pubs shut so that others can be open.’

He had opened his speech by saying: ‘We are bringing this virus under control’.

In his remarks to fellow MPs the Health Secretary deflected calls for an apology from people lashing out at Prime Minister Boris Johnson’s remarks about care homes yesterday.

Mr Johnson said there had been ‘too many’ homes that didn’t follow procedures properly and appeared to blame them for the thousands of residents who have died during the pandemic.

Care home bosses branded the claim ‘despicable’ and ‘cowardly’, instead pointing blame squarely at the Government, which failed to offer adequate testing and PPE, and discharged hospital patients into homes without testing them.

Mr Hancock defended the PM’s comments and said his admiration for carers was ‘second to none’.

He added: ‘Throughout this crisis care homes have done amazing work and the Prime Minister was explaining that, because asymptomatic transmission was not known about, the correct procedures were therefore not known.

‘We’ve been constantly learning about this virus from the start and improving procedures all the way through, and I pay tribute to the care homes of this country who have done so much to care for the most vulnerable throughout this crisis.’

Mr Hancock also refused to rule out asking people who can’t wear face masks because of medical conditions, such as asthma, to wear badges explaining this.

Masks – or coverings – are still not mandatory in England except on public transport, but are becoming significantly more common in public places in the face of growing evidence they can reduce transmission.

Rail fares are growing twice as quick as wages as commuters count on to see a 3.5% enhance
Liam Payne's girlfriend Cairo Dwek shows off her envy-inducing model figure in a TINY blue bikini
Chilling new CCTV shows Sri Lankan suicide bomber checking into hotel
More than 20 people are presumed dead after arsonist sets Japanese animation studio on fire
Simon Yam: Knifeman storms on stage and STABS Tomb Raider star in China
The great Christmas sandwich taste test! FEMAIL tries the best - and the worst
Tip of man's penis turns BLACK after he was bitten during sex
House votes 228-193 to send the articles of impeachment against Donald Trump to the Senate TODAY