Model and actress Alicia Arden claims sexually assaulted her during a meeting in 1997 – and has demanded that authorities investigate why police never followed up with her after she filed a report to the cops.

Arden, 51, spoke out about her claims during a press conference in Los Angeles on Monday – the one year anniversary of Epstein’s arrest.

Arden said that the alleged sexual assault occurred at the Shutters on the Beach hotel in Santa Monica, , in 1997. 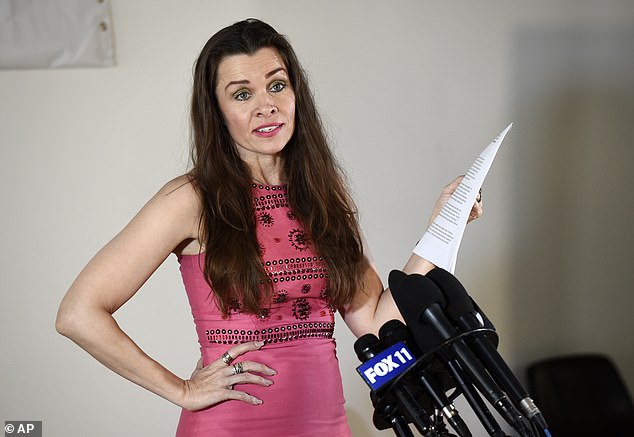 Alicia Arden is pictured at the press conference she held Monday in Los Angeles, revealing authorities did not follow up on her claim that Jeffrey Epstein sexually assaulted her in 1997 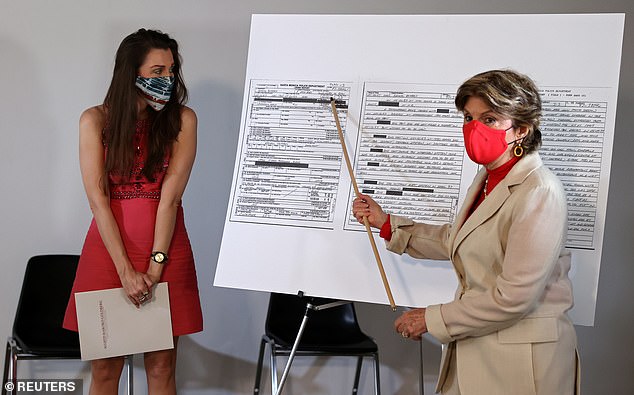 Arden (left) is pictured with lawyer Gloria Allred (right), who is pointing to the police report that Arden filed in 1997, after a meeting she allegedly had with Epstein in Santa Monica

At the time, Arden was 26 years old and an aspiring model, who had a handful of screen credits to her name, including an appearance on the Baywatch TV series and the TV movie, Red Shoe Diaries.

During the press conference, Arden said that she had gone to the Santa Monica hotel to meet Epstein under the belief that she was going to ‘a legitimate audition for Victoria’s Secret.’

She said the supposed audition had been arranged, in part, by an unnamed friend, reported.

Arden said she was carrying her modeling portfolio when she entered Epstein’s room.

She claimed that Epstein said, ‘Let me manhandle you for a second.’ He then allegedly groped her and pulled her shirt up over her head and her skirt down.

Arden said that while this was happening, Epstein had touched her hips and buttocks.

‘I started to feel scared and I began to cry,’ Arden recalled. 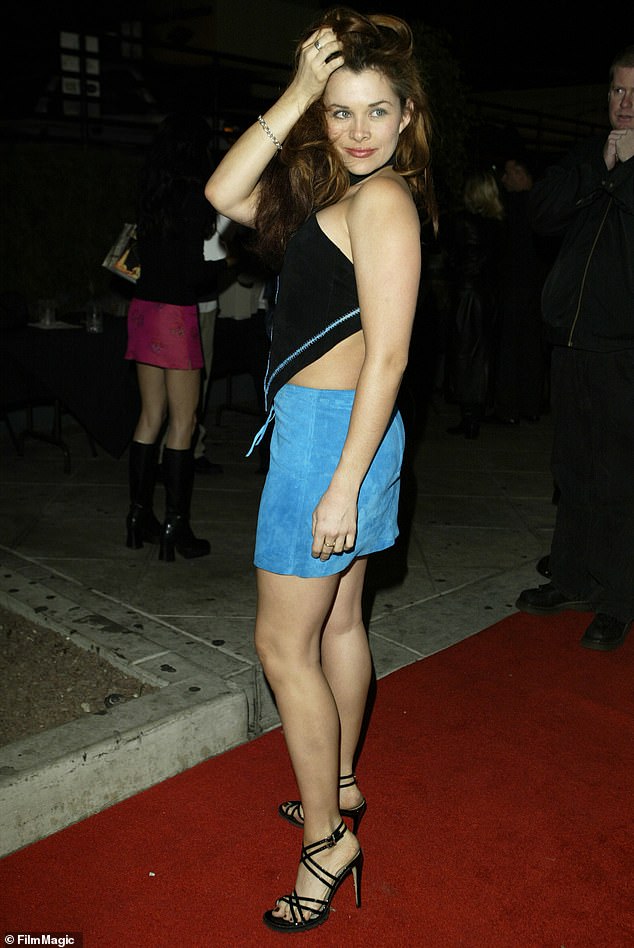 Arden was 26 years old when the alleged assault occurred in 1997. She said she had gone to see Epstein thinking she was going to a ‘legitimate’ Victoria’s Secret audition. Arden is pictured in 2002 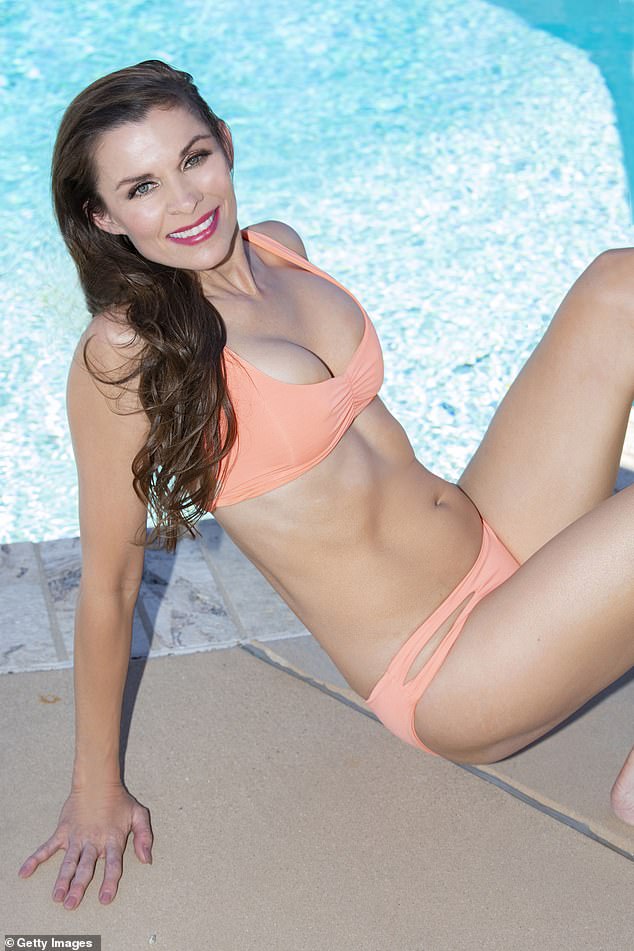 Arden (pictured in 2018) said that Epstein groped her and pushed down her skirt and up her shirt. When he was distracted by a phone call, she was able to make her escape

She said that Epstein got distracted by a phone call, giving her the opportunity to redress. As she headed for the door, she said, Epstein offered her $100.

She said: ‘I told him, “Jeffrey, I’m not a prostitute. I want to be in the Victoria’s Secrets catalog”.’

According to Arden, Epstein responded: “Let me see what I can do.”

She said that she ‘left the money in the hotel room and walked out,’ according to .

‘I felt violated and mistreated,’ she said, adding that Epstein ‘took advantage of me.’

Arden said that a few days after the alleged incident, she filed a police report with the Santa Monica Police Department, but that she never received a call about the report from either detectives or a prosecutor.

‘We’d like to know, first, what happened. Was there an investigation? Was there not an investigation,’ Allred said Monday. ‘I don’t think Alicia should have to live with the unanswered question. … Why was it apparently disregarded? Did they interview Mr. Epstein? Did he decline to be interviewed? Did they take his words against hers? Or did they not do anything?’

Arden had previously come forward about Epstein’s alleged abuse in the summer of 2019, following Epstein’s arrest on federal charges involving allegations that he paid teenage girls hundreds of dollars in cash for massages and then sexually abused them.

In August 2019, the Santa Monica Police Department told the that Epstein was questioned in the wake of Arden’s complaint, but that his statement conflicted with Arden’s claims.

According to the unnamed detective who supposedly invested Arden’s report, Arden said that she didn’t want to press charges against Epstein, asking instead that he be warned about his behavior.

Arden has denied telling police that she didn’t want to press charges against Epstein.

In a December 2019 interview with , Arden provided additional detail about her alleged encounter with Epstein.

She said that she prior to her meeting with Epstein, she had been asked to do a test shoot and send the photos to Epstein’s New York office.

She said that she was so excited about the prospect of being able to model for Victoria’s Secret, that she purchased lingerie from the brand to use during the shoot.

Epstein then supposedly invited Arden to the Santa Monica hotel for an in-person meeting.

‘He was very nice in the beginning and looked at my portfolio. When you go on an audition for something like this, they want to see your body,’ Arden told DailyMail.com.

‘I was in very little clothing — like a swimsuit-type bra with a top over it and underwear and a short little skirt so he could see my legs. He said he liked the photos and said he’d love to get a picture in the Victoria’s Secret catalogue.

‘He said: “You know, you look really good, your body looks really good. I think I just need to see it better.” ‘

Doing as requested, she moved closer — only for Epstein to start ‘manhandling’ her.

‘He started to take off my top, then he moved down to my skirt and was trying to take that off, and was touching my hips and buttocks,’ she said.

‘He told me he worked for Victoria’s Secret, and he was misrepresenting the brand — I wanted to file that.’

She has been charged with helping to procure victims for Epstein’s child sex trafficking operation that began more than 25 years ago.

Epstein died in jail in New York City in August 2019, after pleading not guilty to the charges against him. The coroner ruled his death a suicide, confirming that he hanged himself in his cell.