South Dakota will not require social distancing or people to wear masks when visits Mount Rushmore for the Independence Day celebration there, despite case numbers in the U.S. spiking recently.

‘We told those folks that have concerns that they can stay home, but those who want to come and join us, we’ll be giving out free face masks, if they choose to wear one. But we will not be social distancing,’ Noem continued in her interview with the ‘The Ingraham Angle.’

The instructions, or lack thereof, from Noem comes as doctors urged Jacksonville, to cancel the Republican National Committee Convention there in August.

‘Unfortunately, for some, a face mask has become a political statement,’ the doctor’s claimed in their Monday letter. ‘This is irrational and meant to sow division. The enemy is this virus, not each other. There are ways of encouraging compliance short of making it a criminal offense, and it’s working in hundreds of cities worldwide.’ 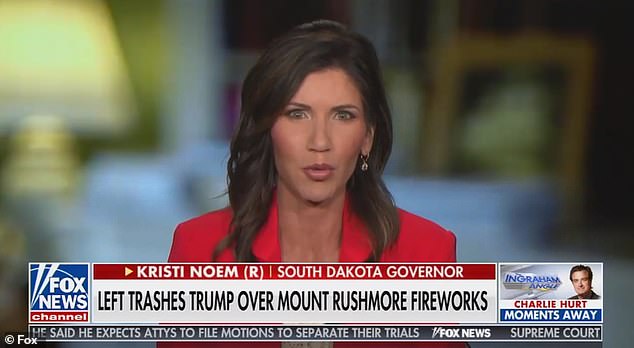 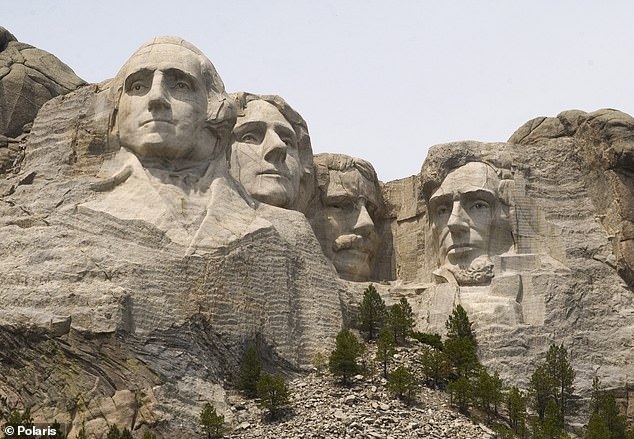 Trump will make remarks at Mount Rushmore on Friday, July 3 – where the state says the crowd will be limited to 7,500 attendees

The lack of coronavirus restrictions comes as the U.S. sees a spike in cases, but South Dakota remains minimally affected

They also claimed in the letter, which was signed by hundreds of physicians, that ‘It is extremely dangerous and contrary to current public health recommendations to stage a large event in an area where the number of cases is surging.’

‘The RNC should be postponed or very significantly reduced in numbers because of these risks,’ the doctors urged.

Jacksonville City imposed an order Monday evening requiring all people to wear masks at indoor locations, or areas where social distancing is impossible – like the beach.

The order in Northern Florida comes as Trump prepares to travel there for the convention later this summer.

The president has still refused to wear a mask and has never been seen publicly donning a face covering – even though many members of his administration, including Vice President Mike Pence, have started sporting the look in public.

Charlotte, North Carolina was the original host city for the Republican convention, but Trump and the RNC asserted the location be moved to Florida to allow for the crowd the president desired for his renomination coronation speech.

The mandate in Jacksonville came as coronavirus cases continue to surge in the state as it reopened and experienced several record-high infection days in a row.

Trump will travel to the Mount Rushmore National Memorial sculpture in Keystone, South Dakota on Friday, more than a month before the convention and the day before July 4th, where he will deliver remarks at the Independence Day celebration.

Attendance for the event ‘will be limited’ to 7,500 people – according to the state’s travel website with details for the event – amid a nationwide resurgence of coronavirus infection numbers.

‘Every one of them has the opportunity to make a decision that they’re comfortable with,’ Noem told Fox News host Laura Ingraham Monday as state officials say the people of South Dakota should ‘focus on personal responsibility.’

While there will be no requirements for attendees to wear masks or social distance, the National Park Service says on the website: ‘We ask the public to be our partner in adopting social distancing practices when visiting parks.’

South Dakota, with a population of 884,659, is one of the states that has been least affected by coronavirus, with only 807 active cases.

The state has seen 6,716 positive cases of coronavirus of the more than 2.6 million positive cases across the U.S., which is about 0.0025 per cent of the total cases nationwide.

Less than 100 people have died in South Dakota from the disease.

Florida is a different story.

As of Sunday, there were nearly 150,000 confirmed cases of coronavirus in Florida, and more than 3,400 deaths.

On June 26, the state saw an increase of nearly 4,000 new cases from the day before.

Many areas of the state, especially those with large cities, have begun slowing down reopening and even reimposing some previous restrictions to lessen the case increase.

The Republican convention will be held in the VyStar Veterans Memorial Arena, which has a capacity of 15,000 and so far there is no indication that number will be limited.

Doctors, in their letter demanding the event be canceled, noted: ‘It is estimated that more than 40,000 people, including the press and protestors, will attend from all over the US.’

Police work to cease overdoses after 76 fall sick in Connecticut
Jussie Smollett hospitalized in Chicago after homophobic attack
BEL MOONEY: Will my husband ever again be the man I fell for?
Ex professional hockey player found 'shot dead' in double-homicide
General to make history becoming the first ever female commander of an infantry division in the US
Mother, 34, reveals she's often mistaken for her son's YOUNGER sister or girlfriend
Mark Zuckerberg explains why Facebook left up Trump's controversial 'looting and shooting' post
Joe Biden almost drops F-BOMB during passionate speech about President Trump