A Buffalo cop has been suspended after calling a woman a ‘disrespectful little f***ing c***’ in a clash outside a 7-Eleven in Buffalo.

Lieutenant Mike DeLong confronted Ruweyda Salim after she started filming from the sidewalk when cops surrounded a man outside the store.

DeLong said the man had ‘two crack pipes and just attacked his mother’, but Salim argued there was no need for the heavy police presence.

When Salim refused to move despite the lieutenant’s warning that ‘we have cameras too’, DeLong made his vulgar comment – leading to his suspension when the video surfaced online. 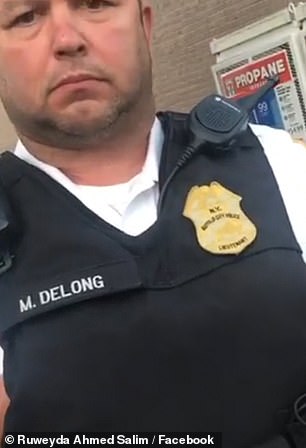 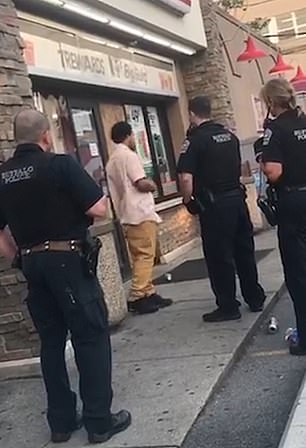 At the start of the video, the suspect had his hands up outside the store and was surrounded by six officers, one of whom was searching his pockets.

The man appeared to be arguing with police but was not physically struggling with them.

DeLong approached Salim after spotting her filming from the sidewalk, and introduced himself with the warning: ‘We have cameras too’.

Salim was not alarmed by this and asked DeLong to get away from her, which he refused to do.

Clearly irritated by her filming, DeLong said the suspect ‘has got two crack pipes and just attacked his mother’.

Salim counted 10 cops in the parking lot and replied: ‘There’s no need for all these policemen to handle someone who is on drugs’.

DeLong insisted that the man was ‘violent’ and claimed ‘he was holding a weight in his hand’, but Salim said she was ‘not going to go near him’ and was in no danger.

Walking away as he received a message on his radio, DeLong said: ‘You’re a disrespectful little f***ing c***, that’s who you are.’

Salim replied: ‘Thank you, you’re going to be viral’ – prompting DeLong to turn back around and order her to move off the sidewalk, which she refused to do.

DeLong added: ‘I don’t care about going viral, I really don’t’, while the suspect continued to remonstrate with cops behind him. 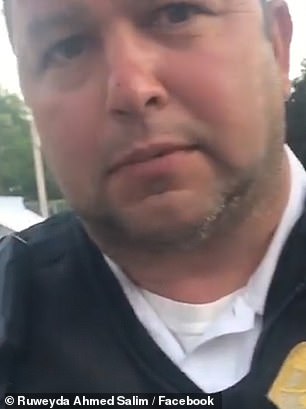 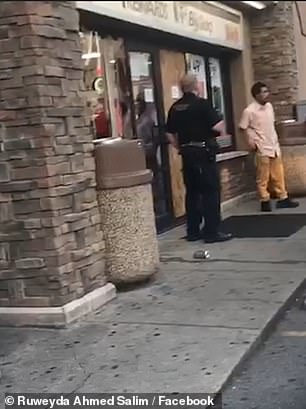 Asking where Salim worked, he threatened he would ‘come to your work and sit there and tape you’ in retaliation.

This again failed to intimidate her, but she took offense at his theory that she might be a ‘secretary’ – asking if he had suggested this because she was a woman.

Accused of ‘pressing yourself against me’, DeLong said he was ‘making sure that I’m taping you [while] you’re taping my people.’

Salim subsequently posted the video online, saying she was ‘physically and verbally harassed’ by the officer in the footage.

‘They tried to say he had a weight in his hand, this man had no weapon in his hand,’ she said of the suspect.

‘None of the nine other cops stopped this man from physically harassing me. I’m so small and not intimidating in the slightest but they acted like I was such a threat.

‘Who’s training these people? Why is acceptable for them to degrade me? Armed police officers should be able to effectively do their job with out being threatened by civilians recording them.’

Local news station reported that DeLong had been suspended without pay while the video was investigated.

Footage of cops has been under greater scrutiny than ever since the death of George Floyd on May 25 which triggered a wave of anger at police brutality.

Minneapolis police initially told the public that Floyd died after a ‘medical incident during a police interaction.

The police department denied lying and said staff had been given incorrect information before the footage surfaced.

In Buffalo, cops said a 75-year-old protester ‘tripped and fell’ during a demonstration, which quickly proved false when footage showed him being shoved by police.