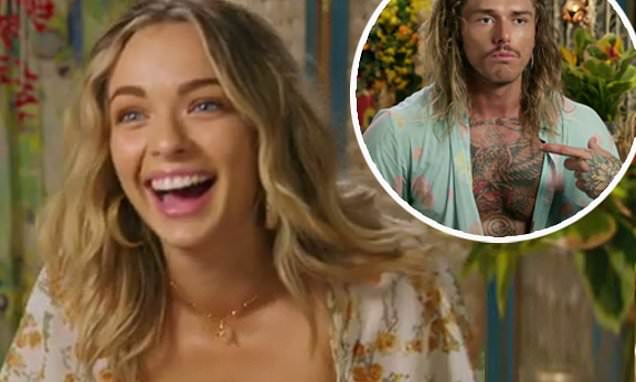 The third season of finally has a premiere date.

The reality TV spin-off will launch on Channel 10 on Wednesday, July 15 at 7:30pm, the network announced on Friday.

Paradise typically starts in late March or early April, but this year’s season was pushed back by three months.

The show was filmed at the Mango Bay Resort in in November and December, meaning production was not interrupted by the pandemic.

However, Channel 10 decided to hold the series until later in the year to prioritise its news coverage of the global health crisis.

Bachelor in Paradise follows ex-contestants from The Bachelor and The Bachelorette as they compete for a second chance at love.

In a recent teaser for the upcoming season, ex-Bachelorette star Ciarran Stott arrives naked at the Fijian villa with only a bunch of red grapes covering his modesty.

He confidently strides up to Abbie Chatfield, the runner-up from last year’s season of The Bachelor, who reveals she has a crush on him.

‘I came here for Ciarran, he’s hot and such a naughty boy. He’s mine and I’m going to get him,’ Abbie says in the trailer.

The pair are shown kissing in a bathtub, after which Brittany confesses: ‘He really took me by surprise. [There’s] something about him that I want to get to know more.’

Ashley Benson confirms relationship with Cara Delevingne on Instagram
Kardashian feud: Kim and Kourtney continue to argue on Twitter
Gemma Collins insists she's not quitting Dancing On Ice
Made In Chelsea EXCLUSIVE: Sam Thompson is back to 'have his say' on the Habbs/Jamie romance
Catherine Zeta-Jones, 50, glams up in red dress as she and Michael Douglas, 75, go to birthday bash
Married At First Sight: David Cannon seen out for the first time after toothbrush toilet scandal
Louise Redknapp and Laura Whitmore are among the stars enjoying a trip to the pub
Chris Evans showcases his muscular physique and tattoo collection as he backflips into swimming pool