Two twin girls were rescued after plummeting off a San Diego cliffside in a car being driven by their father, in an apparent murder-suicide attempt.

The near-tragedy occurred on Saturday morning at a Sunset Cliffs in the southern part of the city.

A K9 officer with the San Diego Police Department rescued the toddlers after witnessing the man careen over the cliff top. 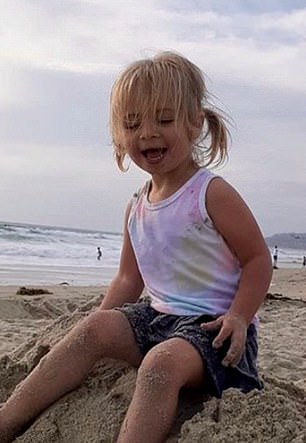 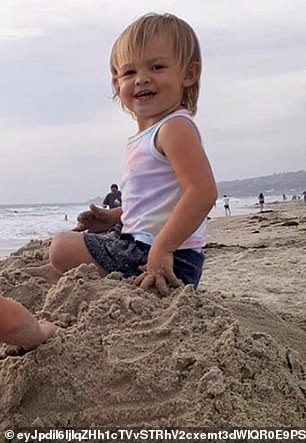 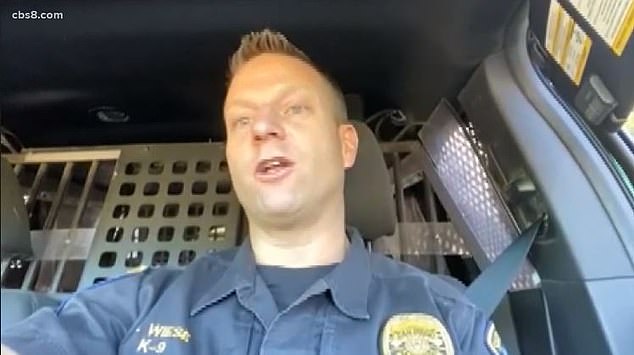 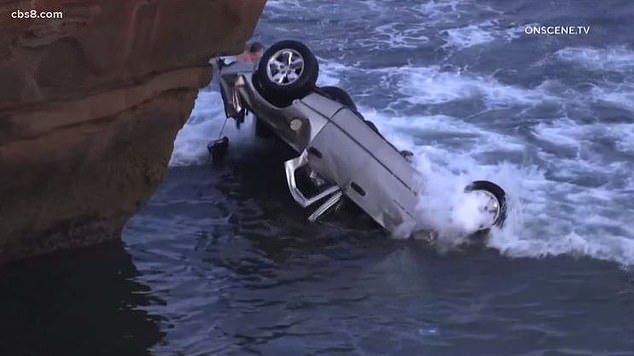 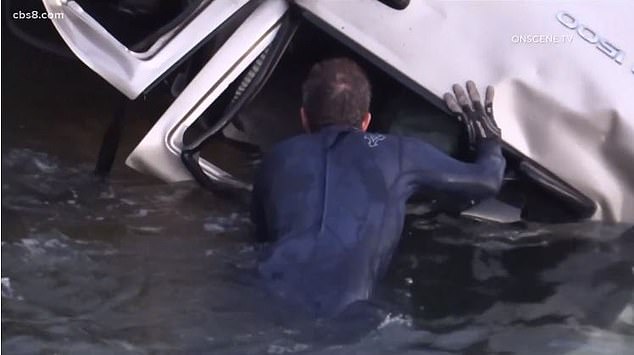 Almost without thinking, Wiese lowered himself down the 30ft cliff face to help in the rescue

His daughters were sitting in the man’s lap at the time the man decided to plummet over the edge.

Initially a call went out suggesting the father was about to drive off the Coronado Bridge whereupon law enforcement were able to track his phone to the nearby cliff.

K9 Officer Jonathan Wiese with the SDPD saw the trunk land on its roof.

‘Literally, my heart sank. Please tell me the girls were not in the car,’ Wiese said he thought to himself to the 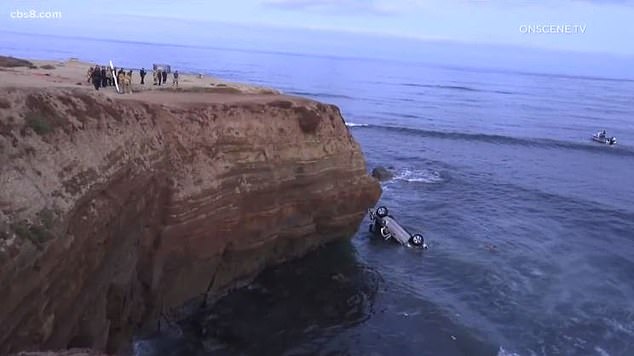 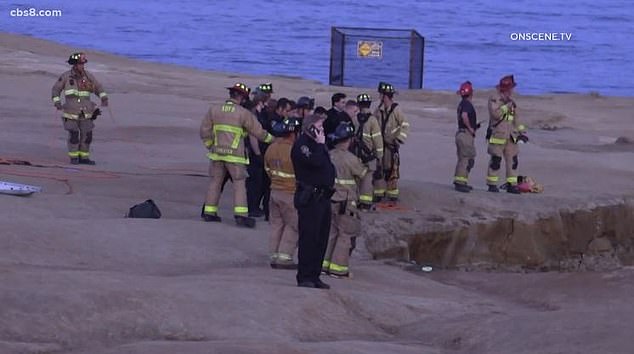 Incredibly, all three survived including the toddler girls who would have been killed had they been sitting in the back seat.

‘I could see him and he had one of the girls in his arms, and I have a two-year-old daughter at home so I imagined, what if that was my wife and kid down there? You’re not going to stand there on the cliff and watch it happen,’ Wiese said to as he set about rescuing them.

Wiese tried to think of a way to get down the cliff and recalled he had a 100ft leash with him.

He handed one end of the rope to five other cops who had shown up to assist and jumped over the edge.

Wiese ended up being lowered down to the rocks below and the ocean. He then swam, still wearing his police uniform, towards the dad who now had the children in his arms. 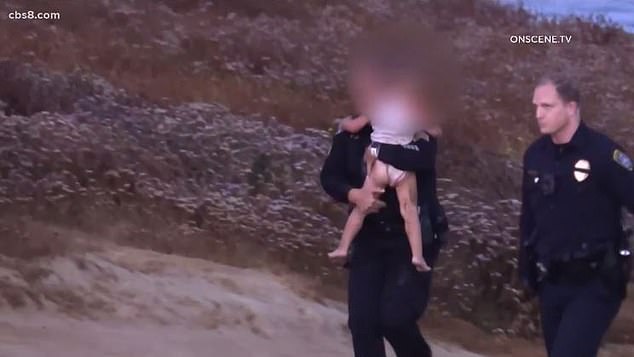 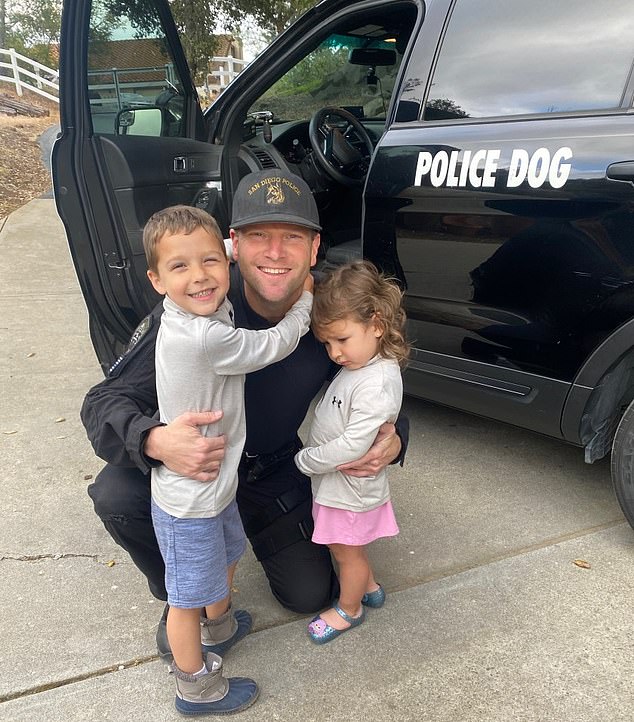 Heroic Wiese has two children of his own and was named Officer Of The Year of San Diego P.D. in 2019

The rescue was made all the more difficult as waves kept on coming ashore but Wiese appeared to be the man for the job having served in the Marine Corps.

‘They taught you how to do water safety rescues and I had a little flashback of okay grab him under the armpit and push him so I swam and held them above water and brought them to shore,’ he said.

One of the girls was still breathing but the other was limp.

Fellow officers on the cliff top lowered a backpack down to hoist the little girls back up to an ambulance.

The girls are currently in intensive care but are expected to make a full recovery.

‘That’s the best news you can have,’ Wiese said. ‘All I care about is that those girls are going to live and have a second chance at life.’ 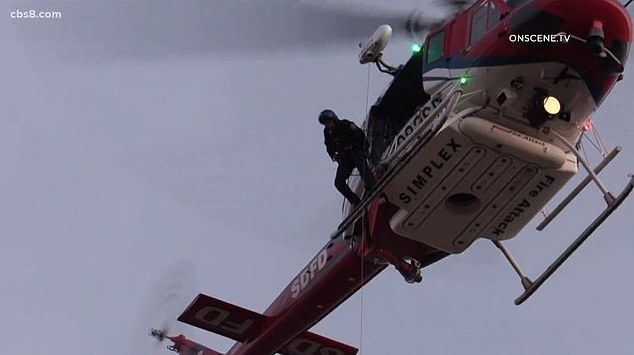 The father was eventually airlifted and taken to hospital 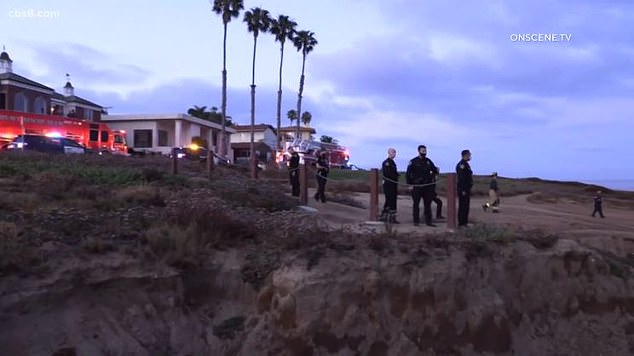 Wiese raced into action. By the time he had rescued the trio, more officers arrived on scene

While down below, Wiese had time to speak with the father as the pair waited for a rescue helicopter. He decided not to leave him alone in case made another attempt at ending his life.

The man told him that ‘he was going to die and the girls were coming with him.’

Wiese was named Officer of the Year in 2019 by the force.

‘I didn’t do the job to be liked every day, I didn’t do it to become rich, I did it because I want to be out there making a difference and helping people, as cliche as that might sound, but I was just glad I could be there,’ Wiese said to .

‘You just do what you have to do, but after everyone was safe, it hits you and you just want to go home and hug your kids that’s for sure.’

A page has been set up to help the recovery of the twin girls.

Yazidi ISIS intercourse slave is ready to marry the person who aided her restoration
Popular Polish mayor fights for life after being stabbed on stage
Twitter users ignite #FakeMelania conspiracy theory about First Lady
Prince Andrew 'has had more than 1,000 lovers' but would never sleep with teenagers, friends claim
Retired soldier left partially paralyzed by military medical care sues the VA to pay for benefits
Comedian slams Twitter from warning him about hateful conduct
Bonnie And Clyde actor Michael J Pollard dies at 80 after suffering a cardiac arrest
Washington care home where 14 have died has only NOW got enough coronavirus tests