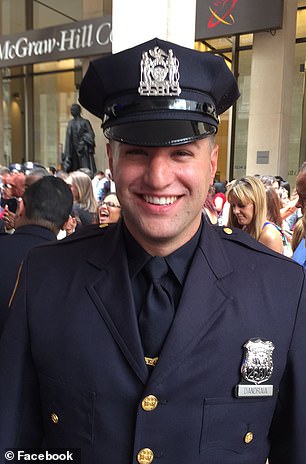 Vincent D’Andraia, of the 73rd Precinct, turned himself in on Tuesday and was charged with misdemeanor assault, harassment and menacing, by the Brooklyn district attorney’s office

The NYPD officer who was filmed violently throwing a female protester to the ground during a George Floyd demonstration in Brooklyn has been charged with assault, among other offenses.

Vincent D’Andraia, of the 73rd Precinct, pleaded not guilty to assault, criminal mischief, harassment and menacing, during his arraignment on Tuesday.

The 28-year-old officer did not say anything as he appeared on video from behind bars in a suit and protective coronavirus face mask.

He was later released on his own recognizance and ordered to stay away from protester Dounya Zayer, who was hospitalized after hitting her head on the pavement in the May 29 altercation.

D’Andraia is the first New York City police officer to face criminal charges stemming from alleged misconduct exhibited during the early days of protests in the city over the death of George Floyd and police brutality. 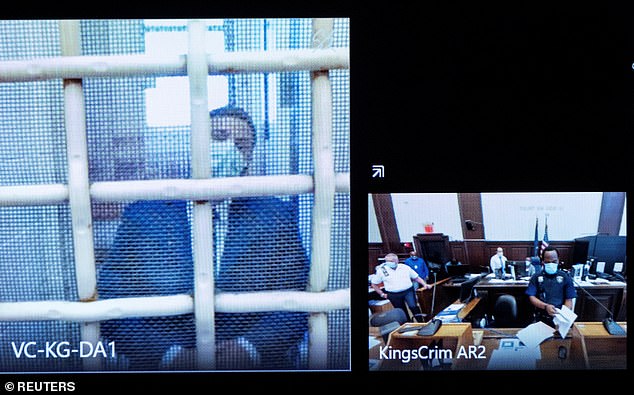 D’Andraia appeared in a Brooklyn court via video conference on Tuesday where his lawyer pleaded not guilty on his behalf. He was seen wearing a suit and a protective mask 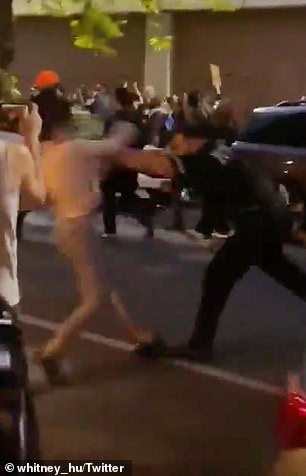 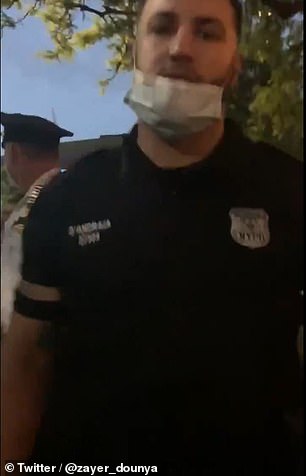 The officer, who was identified as Vincent D’Andraia, was caught on camera shoving 20-year-old Dounya Zayer during a George Floyd protest near Brooklyn’s Barclays Center back on May 29 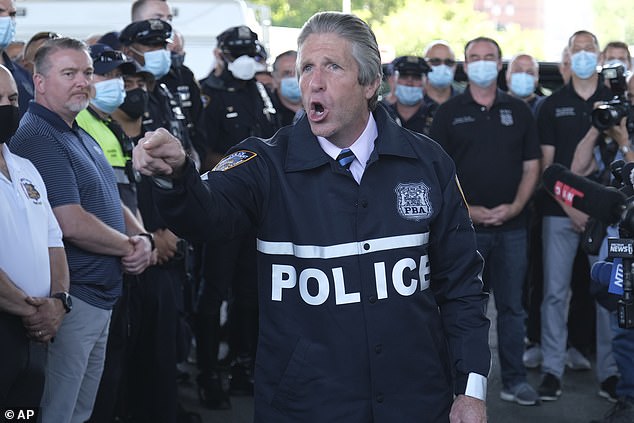 On Tuesday, Pat Lynch (pictured) president of the Police Benevolent Association slammed Mayor Bill de Blasio and police leaders for ‘sacrificing cops to save their own skin’

The charges come days after he was suspended without pay and stripped of his weapons after bystander video was widely shared online showing him forcefully shoving Zayer, 20, during a protest near Barclay’s Center.

On Tuesday, Pat Lynch, president of the Police Benevolent Association slammed Mayor Bill de Blasio and police leaders for ‘sacrificing cops to save their own skin’ by sending officers out to protests with ‘no support and no clear plan.’

‘They should be the ones facing this mob-rule justice,’ he said in a statement.

‘We will say it again: New York City police officers have been abandoned by our leadership. We are utterly alone in our efforts to protect our city.’

In a statement announcing the charges, District Attorney Eric Gonzalez said he ‘cannot tolerate the use of excessive force’ against anyone exercising their constitutional right to protest, adding he was ‘deeply troubled by this unnecessary assault.’

Zayer’s attorney, Tahanie Aboushi, last week called for the D’Andraia’s arrest, saying the woman had suffered a seizure, a concussion, bruising and lacerations as a result of the incident. 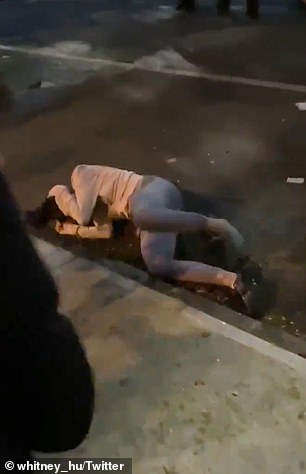 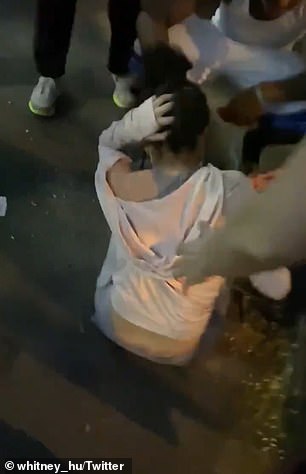 Footage filmed by a witness showed the officer pushing Zayer so hard she was thrown back onto the street. She could be seen cradling her head immediately after as the officer walked off

Video showed the cop had called Zayer ‘a stupid f***ing b***h’ and shoved her with such force that she flew out of her shoes and slammed her head on to the pavement. 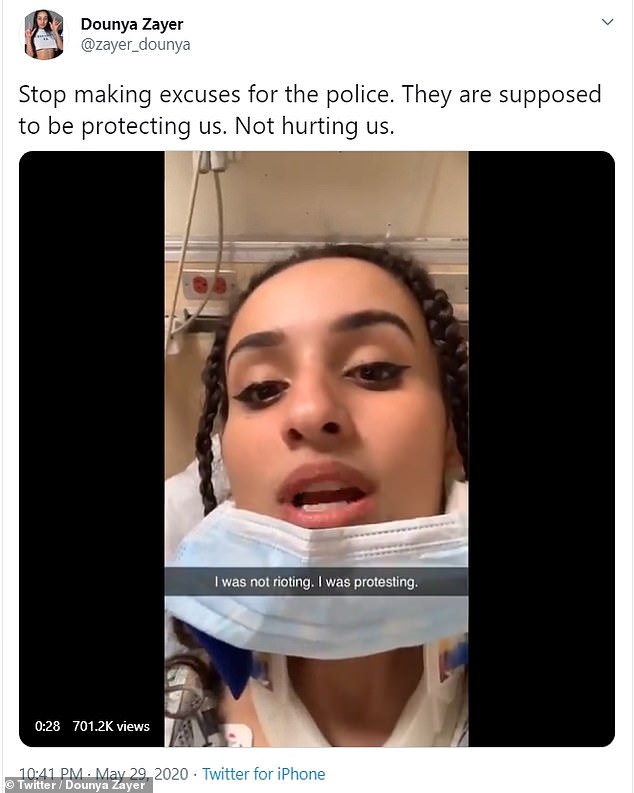 The woman shown been violently flung to the ground by an NYPD officer was identified by those at the scene as Dounya Zayer, who later posted about the attack from hospital

She could be seen cradling her head immediately after as the officer walked off.

She later shared videos from her hospital bed saying she required treatment after the attack.

In a separate video taken from her own perspective, D’Andraia was seen taking a swipe at her phone, which she says knocked it out of her hands.

She claimed the officers asked her to get out of the way and she was moving backwards and asking why when the officer lunged at her.

‘I am in pain. My head hurts. I haven’t slept in three days… and I cannot stop throwing up,’ Zayer told NBC soon after the incident.

‘Them acting the way they acted today isn’t helping the cause. It isn’t proving to us that they care about us.

‘He did this in front of his lieutenant and multiple other officers who watched me hit the ground. One even looked back to make sure I was still on the ground and they continued walking.

The officer’s supervisor, who could be seen walking nearby but failed to intervene, is also facing disciplinary action.

Law enforcement officials told the New York Times prosecutors are considering criminally charging at least 40 other officers over other incidents involving use of force.

It comes amid mounting criticism of the NYPD and city officials, including Mayor Bill de Blasio, who have been accused of overlooking police officers’ heavy-handed tactics.

Last week, however, De Blasio warned that officers would face investigation for misconduct after videos emerged showing cops mistreating essential workers during curfew, despite them being exempt from the rule. 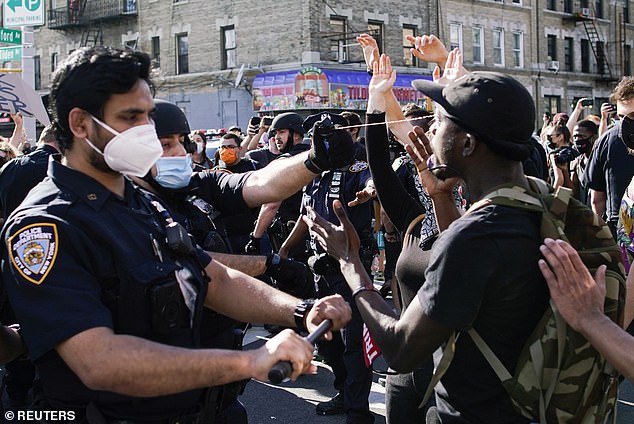 The NYPD officer who was caught pulling a protester’s mask down to pepper spray him last week (pictured) has been suspended without pay, Police Commissioner Shea announced on Friday

D’Andraia is one of two NYPD officers who have been suspended without pay over incidents relating to misconduct at protests last week.

A second cop, whose name has not been released, was filmed the following day pulling a man’s mask down to pepper spray him.

The man had been among a massive crowd of demonstrators in Brooklyn and had been holding his hands up at the time.

Police Commissioner Dermot Shea announced the suspensions of both officers last Friday, saying both cases had been referred for disciplinary action.

‘The actions by these officers stand apart from the restrained work of the thousands of other officers who have worked tirelessly to protect those who are peacefully protesting and keep all New Yorkers safe,’ Shea said.

‘While the investigations have to play out, based on the severity of what we saw, it is appropriate and necessary to assure the public that there will be transparency during the disciplinary process.’