is set to reveal intimate details of her relationships on a new TV show after she recently came out as pansexual, according to reports.

The model-turned-actress, 27, is thought to be poised to discuss her love life in a new documentary for Three, which will explore the evolving definitions of sexuality and gender identity.

A source told : ‘It’s a real coup to have landed Cara, as she has such a high profile. 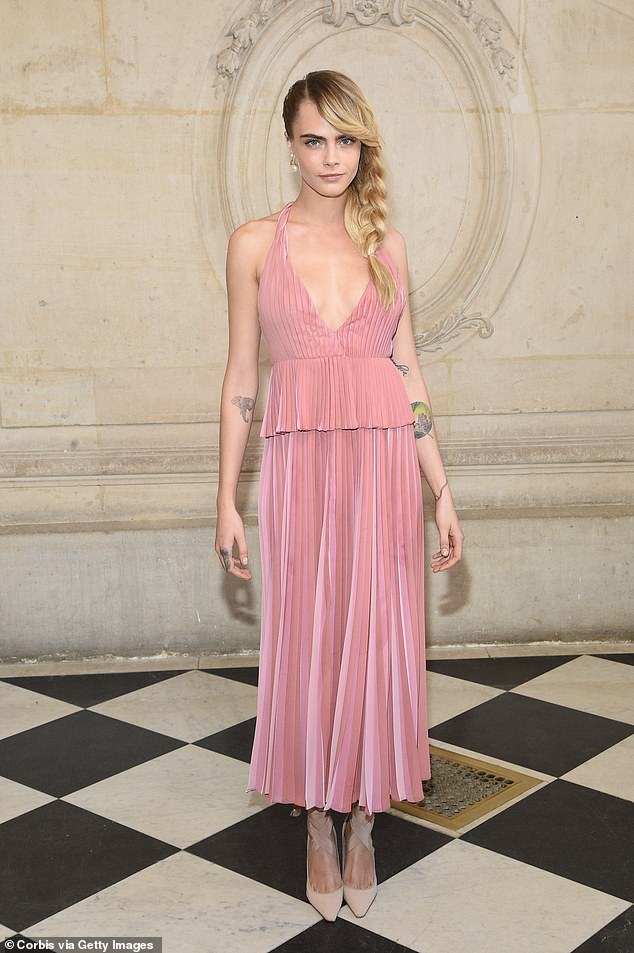 Candid: Cara Delevingne, 27, is set to reveal intimate details of her relationships on a new TV show after she recently came out as pansexual, according to reports

‘There’s a huge buzz about her documentary. Producers are hoping to release it in the US.

‘They’re pleased with how hands-on Cara has been, though obviously production has been held up by coronavirus. BBC Three hopes this will be the first project of many they can do with her.’

Cara’s representatives and the BBC have been contacted for comment. 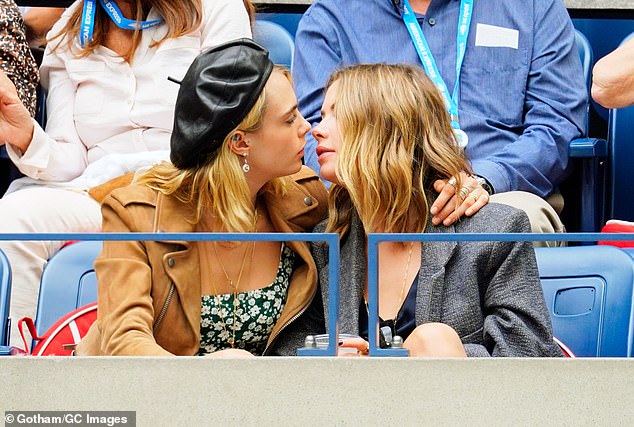 Heartache: Speculation about the show comes shortly after Cara, who recently split from 30-year-old actress Ashley Benson (pictured together in 2019), admitted she ‘never thought’ she would need to ‘come out’ as pansexual

Speculation about the show comes shortly after Cara, who recently split from 30-year-old actress Ashley Benson, admitted she ‘never thought’ she would need to ‘come out’ as pansexual.

‘I always will remain, I think, pansexual. However one defines themselves, whether it’s ‘they’ or ‘he’ or ‘she’, I fall in love with the person — and that’s that. I’m attracted to the person.’

Pansexuality is defined as ‘sexual, romantic or emotional attraction towards people regardless of their sex or gender identity’ but it is considered a separate label to bisexuality which denotes an attraction to two binary genders, male or female. 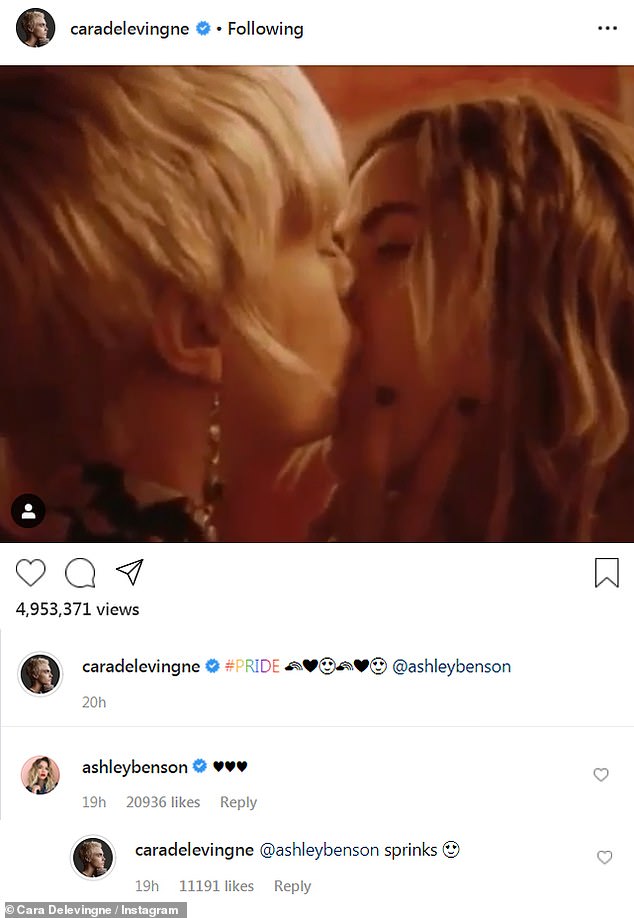 Pride: The supermodel has been open for a long time about her sexuality and last year shared an image to mark Pride of her kissing then girlfriend Ashley

She said: ‘I never thought I needed to come out. It was just kind of like, “This is who I am. Just so you know.”‘

The model had boyfriends growing up and had her first relationship with a woman when she was 18.

She went on to date the US singer-songwriter Anne Clark, known as St. Vincent, from 2014 to 2016, who also identifies as gender and sexually fluid.

Cara, who had previously been linked with Jake Bugg and Harry Styles, then had a relationship with Pretty Little Liars actress Ashley Benson for nearly two years.

The couple split in May this year after their relationship had ‘run its course’ and Ashley has since been spotted with new beau 31-year-old rapper G-Eazy.

Cara has not spoken about the break-up, but admitted: ‘I’ve always felt bad for anyone I’ve ever been in a relationship with. It’s very hard to maintain the normality in it.

‘I think it’s why I tend to keep my private life a lot more private now, because that public thing can actually ruin a lot of things.’

They first sparked dating rumours in August 2018 when they were spotted kissing in London’s Heathrow Airport.

Cara did not confirmed their romance until June last year, when she shared a snap kissing Ashley to mark both their one-year anniversary and the 50th anniversary of the Stonewall Riots.

The Suicide Squad star had already told fans she was gender fluid in 2018.

During her revealing interview, Cara also spoke about the advice offered by the disgraced movie producer Harvey Weinstein, who she claims invited her to his hotel room and tried to kiss her, which she resisted before fleeing.

She said: ‘Harvey was one of the people that told me I couldn’t be with a woman and also be an actress. I had to have a beard.

‘Do you have a conversation with a dude, and they’re like, ‘I’m going to pretend to be with you but not really love you’?

‘I kind of think when I was pushed more that way, I realised how much more I needed to go the other way.’ 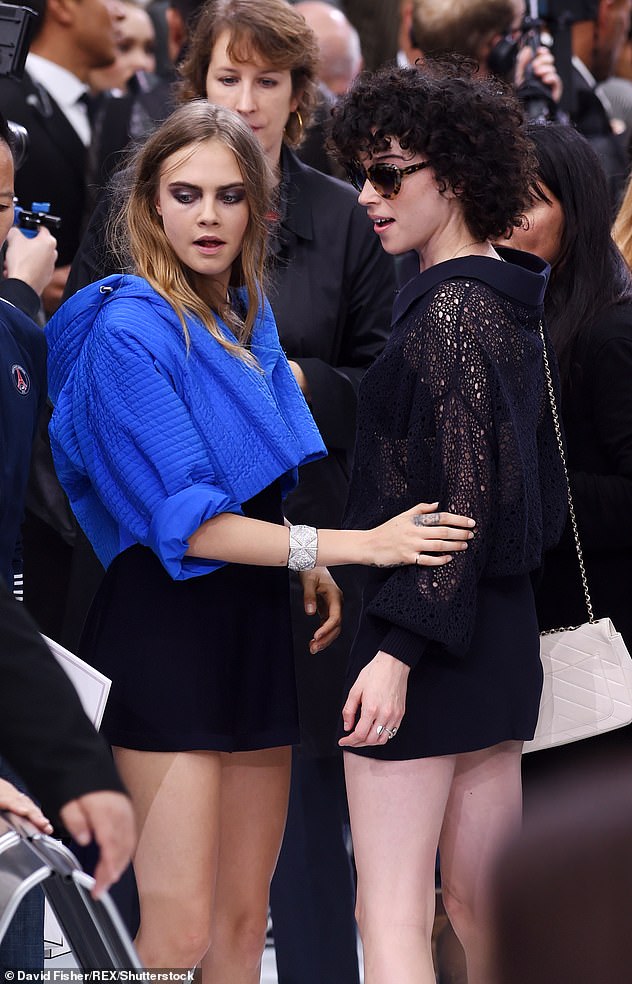 Former flame: Cara previously dated the US singer-songwriter Anne Clark, known as St. Vincent, from 2014 to 2016, who also identifies as gender and sexually fluid