An Aston Martin DB9 supercar worth £75,000 was destroyed after bursting into flames last night in a horror crash.

Police are investigating whether the car had already caught fire when it smashed into a wall at a property on Jevington Road in Polegate, East Sussex, around 6.30pm last night.

The driver suffered severe burns when the luxury sports car erupted into flames. 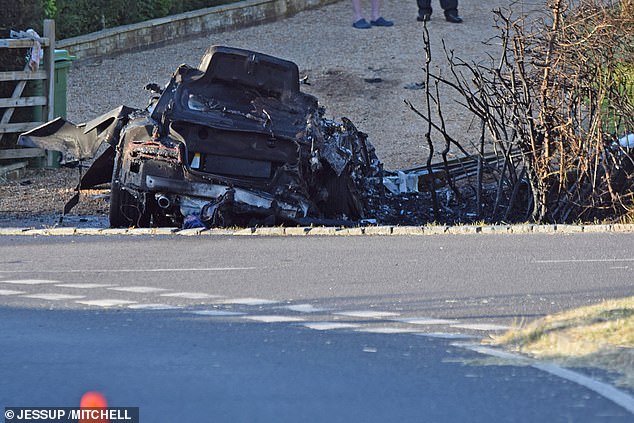 An Aston Martin DB9 V12, pictured, caught alight with the driver being taken to hospital in Polegate, East Sussex yesterday evening at around 7pm 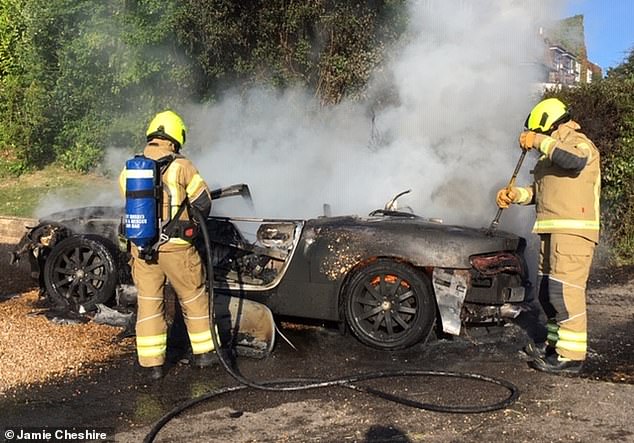 Fire crew seen extinguishing the flames at the scene last night in East Sussex. The car is thought to have been part of a convoy travelling to the hospital for the Clap for Carers tribute

His wife in the passenger seat suffered minor injuries and has been discharged from hospital.

The house is not connected to the married couple who had driven from their home in Brighton.

The 60-year-old driver was taken to hospital in the city before being transferred to the specialists burns unit at the Queen Victoria Hospital in East Grinstead.

The Aston Martin DB9 v12 Volante was completely destroyed by the fire.

No other vehicles were involved in the incident and police have appealed for witnesses.

Pictures show crew dousing the flames with a fire engine and police vehicles at the scene. 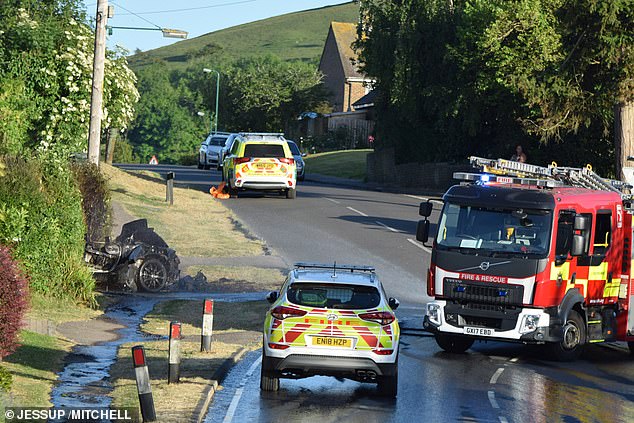 Police vehicles and a fire engine pictured at the scene, with the burnt-out Aston Martin seen off the road, towards the left of the picture. The driver was taken to a hospital in Eastbourne

Witnesses told  the car could have been part of a convoy travelling to the hospital for the weekly Clap for Carers at 8pm.

A spokesman for Sussex Police said: ‘About 6.29pm on Thursday 28 May, police were alerted by East Sussex Fire and Rescue Service to a car fire in Wannock Road, Polegate.

‘An Aston Martin collided with the gate of a property and was destroyed by fire.

‘Investigations are ongoing to determine whether the fire started before or after the collision.’

Anyone with information is asked to email collision.appeal@sussex.pnn.police.uk quoting Operation Radius.

Toni Collette talks monogamy and reveals how she met her husband
Man, 39, is arrested over disappearance of 39-year-old woman
Michel Platini released from custody in early hours after Qatar 2022 World Cup corruption interviews
New Strictly judge Motsi Mabuse risks awkward reception in Blackpool
Man dies after 'getting locked in a fridge on board a trawler' in Cornwall
Entire Swedish family is killed in Iran plane crash
Family of Sean Ford, 15, pays tribute to 'outgoing and intelligent' boy who was stabbed
Dua Lipa banks £25 million DOUBLING her annual earnings as pop star gains on the likes of Adele