Black, Asian and minority ethnic people in England are 54 per cent more likely to be fined than white people under the laws, figures reveal.

In an investigation by Liberty Investigates and the , they tracked 13,445 of the fixed penalty notices (FPN) from the period of March 27 to May 11.

It found that 2,218 were handed to the BAME community as opposed to 7,865 to white people. A quarter of the fines were handed to people whose ethnicity had not been identified.

BAME people make up 15.5% of the population in England, according to 2016 population figures, and they received 22% of the lockdown fines, according to the most recent data from the National Police Chiefs Council. 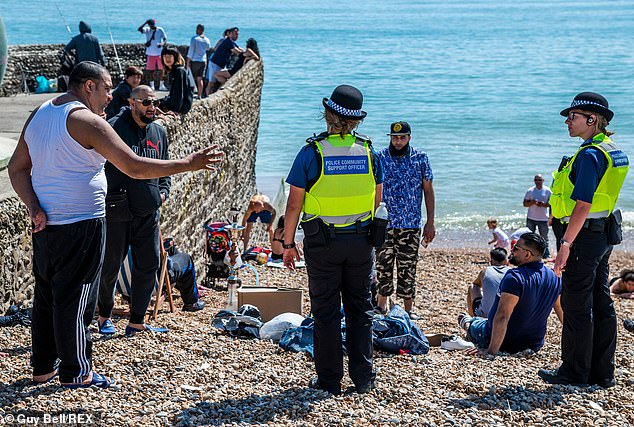 The National Police Chiefs’ council have been the source of the figures and have released three sets of data figures since the FPNs were introduced on March 27.

Although the first set of figures released on April 15 stated relative proportionality in fines, this claim was later dropped when figures were updated on April 30 and again a fortnight later.

The prime minister announced on 10 May that first-time offenders who flouted lockdown rules could be fined £100 on the spot, and up to £3,200 for repeat offences.

This is step up from earlier lockdown rules which had FPNs at £60 for a first offence, which would be reduced to £30 if it was paid within 14 days. 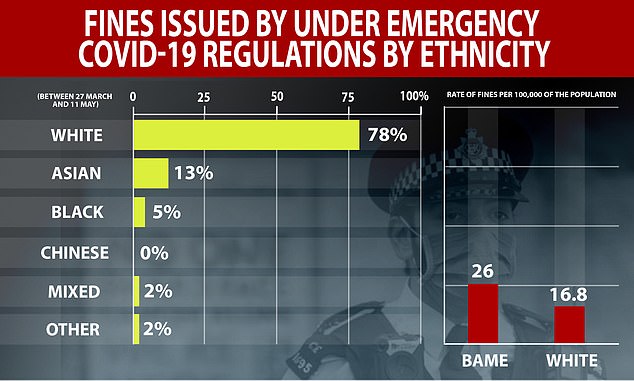 Those who did not pay the fines could then be hit with penalties costing up to £1,000 or more.

There has been much confusion over the rules regarding how fines are handed out, headlined in recent days by the Prime Minister’s aide Dominic Cummings and his apparent breach of the rules which have led to calls for him to resign and piled pressure on Boris Johnson.

Many around the country have been caught out by the lockdown rules. Earlier this month, police in Cumbria fined a family who were enjoying a ‘lovely, sunny day out’ in Ambleside. 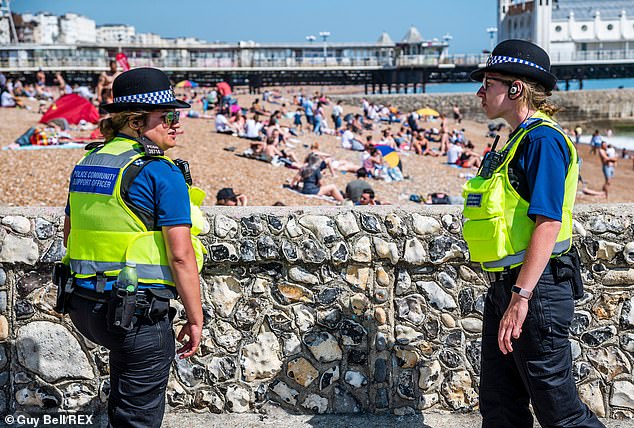 But having travelled from London the distance travelled was not deemed reasonable so they were given a fine and sent back home.’

Meanwhile last month, a Deliveroo worker in York taking food and medicine to residents in lockdown was slapped with a ‘crippling’ £50 fine for cycling through a virtually empty city centre pedestrian zone.

The parliamentary joint committee for human rights and a coalition of civil society groups have called for an urgent review of the FPNs, because of a lack of clarity regarding the fines and their application.

The NPCC have stated that they will further analyse the data in regards to the possible reasons behind the disproportionality of the FPNs handed out.

‘We have been clear this is a developing dataset not subject to the same stringent analysis and quality assurance that is possible with an established official statistics collection,’ a spokesman for the National Police Chiefs’ Council told The Guardian.

‘There are a number of complexities in interpreting the data on ethnicity, including the number of FPNs given where an ethnicity has not been recorded.

‘Therefore, we are further analysing the data so we can publish the most accurate picture. Without this analysis, we are not confident that meaningful conclusions can be drawn on ethnic proportionality.

‘Our initial analysis supported proportionality in FPNs given in line with ONS [Office for National Statistics] population. Subsequently, we have judged further analysis is required to fully understand the proportionality issue.’

Customers on-line share the freakiest horror pictures from nature that can depart your pores and ski...
Coroner's chilling warning after girl, 14, died of MDMA poisoning
Thug who attacked police officer with kung fu kick admits assault
Child murderer who kept victim's body in freezer is being re-investigated over mystery death of teen
Mother-of-three, 46, collapses and dies from a brain haemorrhage while exercising in her front room
Former Miss India chased and attacked by a gang of men after filming an attack on her Uber driver
Ghosn used bullet train to escape: Japan broadcaster
Keeping up with the faces! How Kim, Khloe, Kylie and the rest have changed since season one