Charlamagne condemned Biden’s track record with black voters, stating that the former vice president was a ‘very intricate’ part of the ‘systemic racism’ that needs to be ‘dismantled.’

‘My overall takeaway from the conversation is that I heard him talk about things he did for black people back in the day but what have you done for me lately is my motto,’ the radio host explained to  on Friday.

‘I see Black communities catching hell no matter who is in the White House.’ 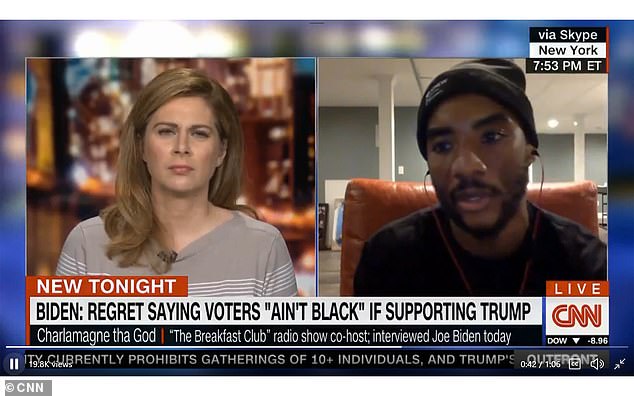 Charlamagne tha God condemned Joe Biden’s track record with black voters, stating that he was a ‘very intricate’ part of the ‘systemic racism’

Charlamagne tha God on Biden’s record: “He really was one of the people on the front lines when it came to the war on drugs, and mass incarceration. If he wants to be president, he needs to fix that.”

Charlamagne was angered that people talked about how the coronavirus was devastating the black community but failed to talk about ‘health issues stemming from systemic racism that has never been fixed.’

The radio host then turned his critique directly to Biden.

‘Like I said before if you have created legislation that has hurt then you have to create legislation that helps, it’s just that simple,’ Charlamagne continued. ‘The whole system needs to be dismantled and rebuilt and he has been a very intricate part of that system.

‘Whether you’re talking about 84 with the mandatory minimum sentences for drug dealers, when you talk about 86 with crack laws that gave you more time for crack cocaine and powder cocaine, or if you talk about the 94 crime bill. 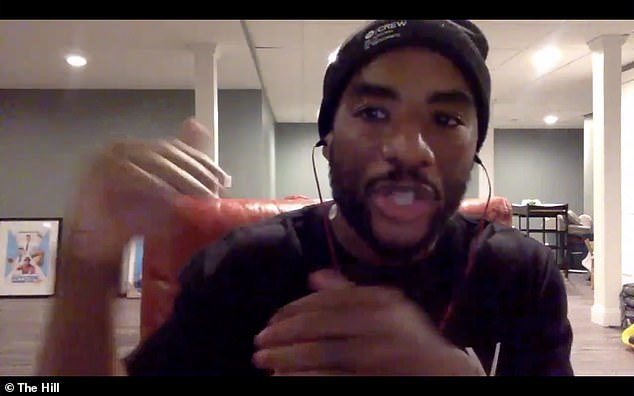 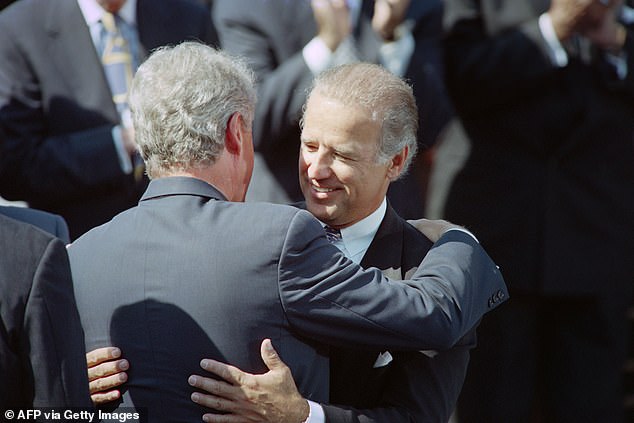 The radio host slammed Biden’s work on the 94 crime bill, which many have critiqued for its effects on mass incarceration, especially for African Americans. Biden pictured with Bill Clinton during the signing ceremony for the bill

‘He really was one of the people on the front lines when it came to the War on Drugs, and mass incarceration. If he wants to be president, he needs to fix that.’

Following the passage of the federal crime bill in 1994, incarceration rates climbed for 14 years, according to the . Many have slammed Biden’s work on the bill to contributing to some of the disparities still impacting many today.

apologized to black business leaders for telling popular radio show host that he ‘ain’t black’ if he can’t discern the better presidential candidate between Biden and President Trump.

‘I should not have been so cavalier. I’ve never, never, ever taken the African-American community for granted,’ Biden said, according to the Associated Press. ‘I shouldn’t have been such a wise guy.’ 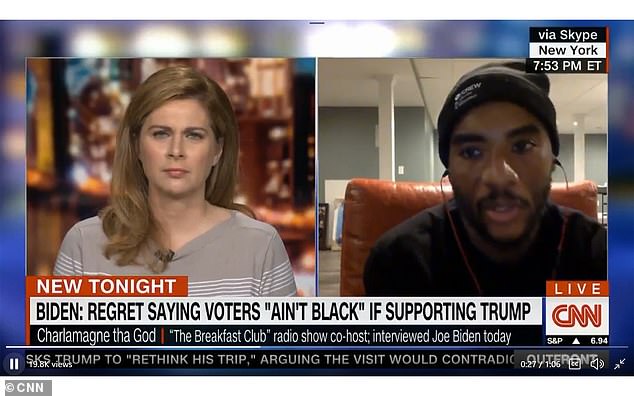 ‘He really was one of the people on the front lines when it came to the War on Drugs, and mass incarceration. If he wants to be president, he needs to fix that,’ the host said

Biden added that, ‘No one should have to vote for any party based on their race, their religion, their background,’ on a conference call with the U.S. Black Chamber of Commerce Friday afternoon.

Among those who criticized Biden for what he said was Diddy, tweeting, ‘Aye bruh @JoeBiden I already told you the #BlackVoteAintFree.’ President Trump and his surrogates also took advantage of Biden’s gaffe.

Biden, the Democrats’ presumptive presidential nominee, made the cringey comment to Charlamagne tha God at the end of a contentious 18-minute interview that aired Friday morning, where the former vice president was forced to defend his record supporting black Americans. 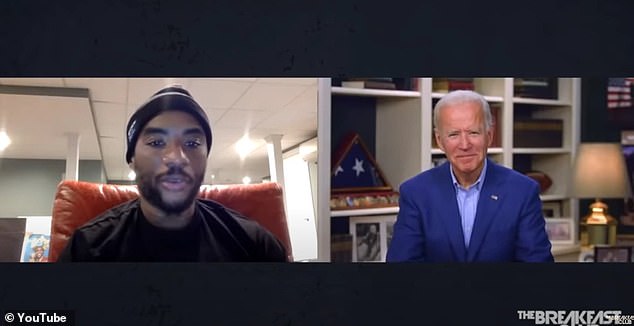 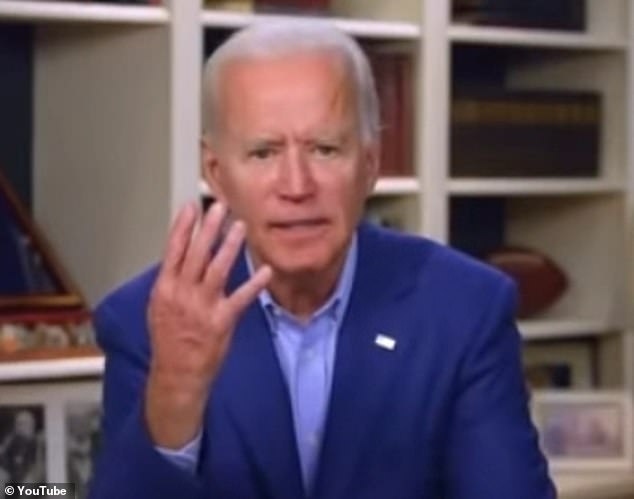 At the conclusion of the interview, Joe Biden told Charlamagne tha God ‘if you have a problem figuring out whether you’re for me or Trump, then you ain’t black’

Over the course of the interview, an aide twice interrupted the back-and-forth to tell Biden he was over on time.

This inspired Charlamagne the God, the host of the popular ‘Breakfast Club’ program, to say, ‘You can’t do that to black media.’

‘I’ve got to do that to white media and black media because my wife has to go on at 6 o’clock,’ Biden replied. ‘Uh oh, I’m in trouble,’ he muttered, checking the time.

The Bidens, who are under a coronavirus stay at home order in Delaware, share a TV studio set up in a basement rec room.

Charlamagne the God asked the ex-veep to come see him in New York post-pandemic.

‘You’ve got more questions?’ he asked.

‘Well, I will tell you what, if you have a problem figuring out whether you’re for me or Trump, then you ain’t black,’ Biden said. 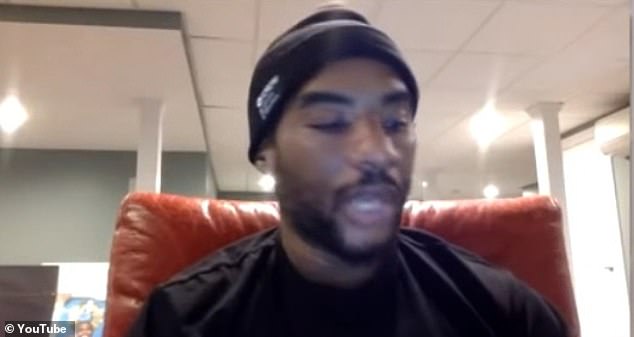 Charlamagne tha God was upfront with Joe Biden about past criticism. And asked him tough questions including whether he was suffering from mental decline

Charlamagne the God replied, ‘it has nothing to do with Trump.

‘I want something for my community,’ he told the former vice president.

Biden, using the defensive tone he used for most of the interview, shot back, ‘Take a look at my record man.’

‘I extended the voting rights act 25 years. I have a record that is second to none. The NAACP has endorsed me every time I’ve run. Come on, take a look at my record,’ Biden said.

When an aide tried ending things for a third time, Biden promised he would come back on ‘The Breakfast Club’ and called Charlamagne tha God ‘pal.’

Things had gotten off to a rocky start with Charlamagne the God copping to the fact that he had been criticial of Biden on his show.

‘No I don’t, that’s why I want to get to know you today,’ the host said. ‘I’m going to talk to you mostly about black stuff.’

Charlamagne tha God asked about Biden’s family and how they were doing during the coronavirus pandemic, while Biden segued and said, ‘I’ll tell you what, the black community is getting killed though.’

The radio host agreed, and then asked Biden about his cognitive health, pointing to the many attacks on the right suggesting that the 77-year-old candidate was experiencing a mental decline.

Biden responded by saying he couldn’t wait to take on the ‘stable genius,’ Trump.

Charlamagne tha God also questioned Biden on how he could excite voters from his basement.

‘By the way I’m beating him across the board,’ he continued. ‘It’s not hurting me, I’m winning in all those states, I’m head in all national polls, the more he talks the better off I am.’

Charlamagne tha God said he was skeptical of polling after what happened in 2016 – especially since Hillary Clinton was ahead in national polling, but got beaten in three key swing states, where polling wasn’t being conducted as regularly.

‘Polls can be illusions,’ the radio host said.

Biden argued that it’s different in 2020 because instead of being an unknown change agent, Trump is a known commodity.

The two had a back-and-forth about the controversial 1994 crime bill, which has been blamed for mass incarceration of black Americans.

‘I got to ask you though, why so much resistance on admitting the crime bill and other legislation you were a part of was damaging to the black community?’ Charlamagne tha God asked Biden at one point. ‘We had Hillary on a few years ago, and Miss Clinton said the crime bill, we made a lot of mistakes with that and she wanted to atone for that by becoming the next president.’

‘She was wrong. It wasn’t the crime bill, it was the drug legislation, it was the institution of mandatory minimums, which I opposed,’ he said.

Biden said he had a broader plane for black America, which he referred to in the interview as a ‘manifesto.’

On the topic of drugs, Charlamagne the God asked Biden why he supported decriminalization of marijuana, but not full legalization.

‘Because they’re trying to find out whether or not there’s any impact on the use of marijuana, not in leading you to othet drugs, but does it effect longterm development of the brain,’ Biden answered. ‘And we should wait until the studies are done.’

Charlamagne tha God also brought up the veepstakes, pointing to the CBS News story that broke Thursday, which said the Biden team was vetting Sen. Amy Klobuchar, a former 2020 candidate who is white.

‘A lot of people on social media, they’re not too happy about that because they want your running mate to be a black woman,’ Charlamagne tha God told the candidate.

‘And black people saved your political life in the primary this year,’ he added.

Biden had performed badly in both the Iowa caucuses and New Hampshire primary. He came in a weak second to Bernie Sanders in the Nevada caucuses, but his campaign’s hopes completely turned around after he was endorsed by Rep. Jim Clyburn, the most powerful black lawmaker on Capitol Hill, and easily won South Carolina’s primary.

While Biden has agreed to picking a female VP, he has not committed to choosing a woman of color.

As soon as the interview was released Friday morning, the Biden campaign started playing clean-up, while President Trump’s campaign came out kicking.

‘The comments made at the end of the Breakfast Club interview were in jest, but let’s be clear about what the VP was saying: he was making the distinction that he would put his record with the African American community up against Trump’s any day. Period,’ Sanders said.

Symone Sanders, a top Biden adviser, took to Twitter Friday morning to clarify that the former vice president’s comments were made ‘in jest’

Ted Turner, 79, reveals he is suffering from Lewy Body dementia
Black FedEx driver will not be charged after fatally punching man who hurled n-word at him
Donald Trump 'cheats at golf' says sports writer
Vegan couple who fed their children a raw vegetable diet 'starved their 18-month-old son to death'
Melania Trump cuts a colourful figure in a bright yellow £4,600 Valentino coat at Clarence House
Mayor de Blasio's office says everyone in NYC should assume they've been exposed to coronavirus
New York dad 'hid coronavirus symptoms so he could be in the room with his wife when she gave birth'
Oklahoma girl, 15, died from overdose in TikTok 'Benadryl challenge'