Beaches in , and were open Saturday for the first weekend since the easing of lockdowns.

Scores of people flocked to the beaches, to make up for time spent indoors and to capitalise on the timely arrival of one of the first heatwaves of the year.

More than 500 beaches reopened across Greece, as the country sought to walk the fine line between protecting people from COVID-19 while reviving the tourism sector that many depend on for their livelihoods.

As the sun took to the skies of Athens on Saturday, citizens wasted little time in taking to the shores – sunning themselves on the sands before dipping into the ocean. 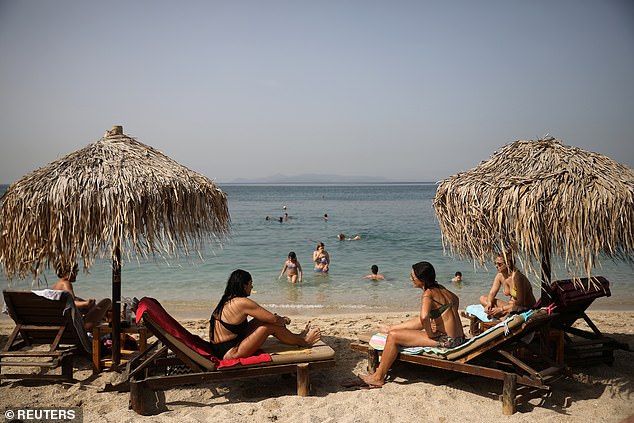 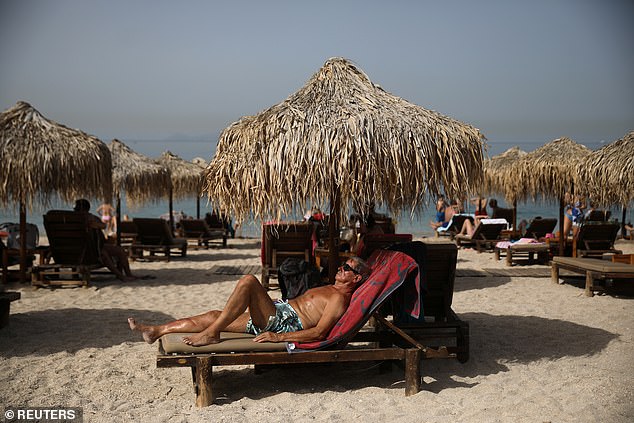 People sunned themselves as Greece bids to kick-start its vital tourism sector – though social distancing rules must still be observed, authorities have said 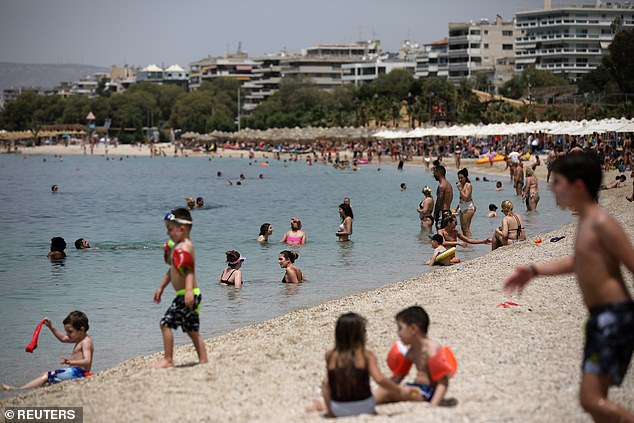 The coastline was soon brimming, with children enjoying the hot weather and taking a dip 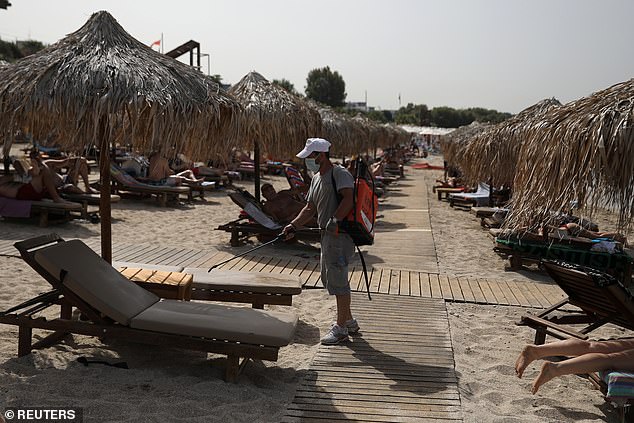 Across the country work had begun at frantic pace on Friday, in order to get beaches ready for crowds once more.

Workers were pictured toiling in the midday heat, setting up canopies and seating areas for outside beach bars.

Sun-seekers were required to respect social distancing rules, which even stipulated how far umbrellas must be kept apart.

Guidelines stated no more than 40 people were allowed per 1,000 square metres (10,750 sq ft), while umbrella poles had to be four metres (13 ft) apart, with canopies no closer than one metre, according to a government-issued manual, complete with diagram. 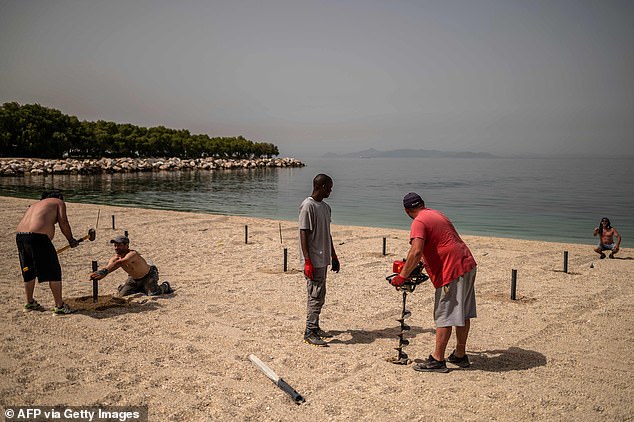 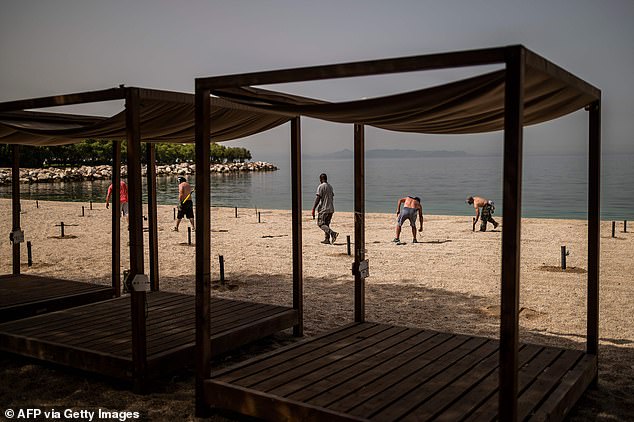 Canopies, bars and seating areas were quickly erected ahead of the return of tourism 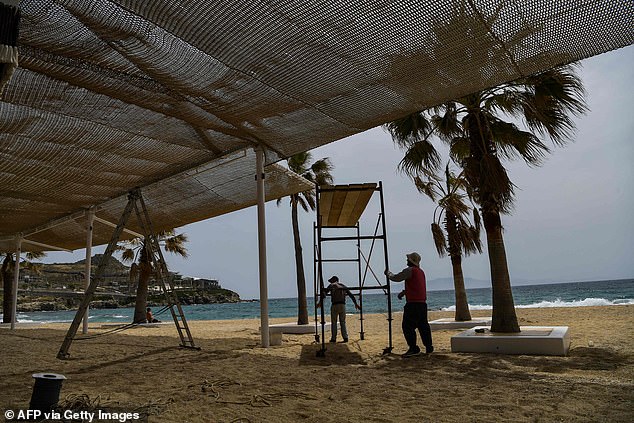 Workers carry a scaffolding on “Paradise” beach in the Greek Cycladic island of Mykonos. Like many European countries Greece has huge reliance upon its tourism industry

At Alimos, a popular beach just south of Athens, people queued up from early morning to nab their spot in the sunshine.

‘This is the best thing for us elderly … to come and relax a bit after being locked in,’ a 70-year-old local Yannis Tentomas told Reuters, as he settled down under an umbrella.

He said he was complying with distancing rules, adding: ‘It’s like a gun to the head.’

Italy and France have also started to ease people back into a degree of normality, hoping to keep the virus at bay and avoid a deadly second spike while breathing life back into their respective economies. 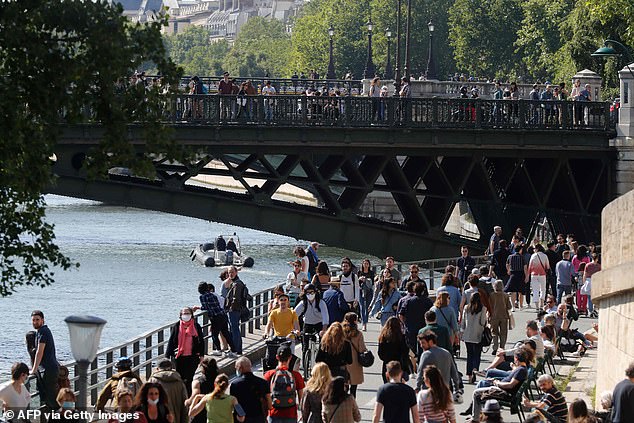 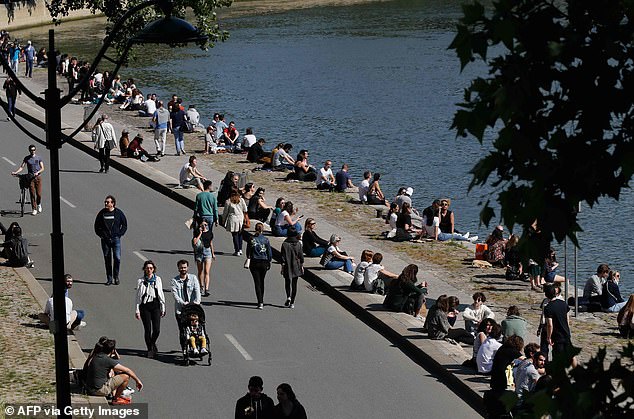 Members of the public were packed closely together as they sat on the edge of the River Seine, Paris 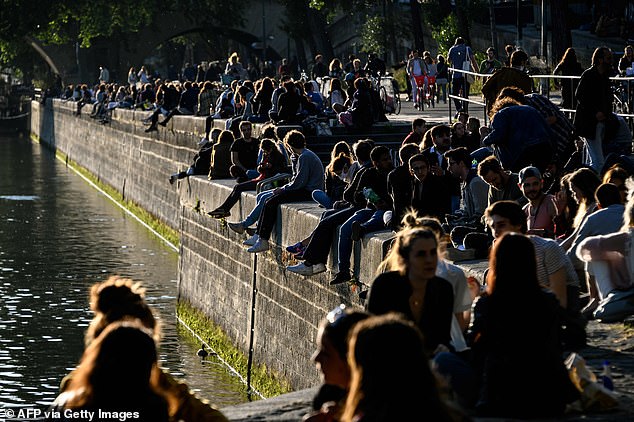 France called for self-restraint as the country prepared for its first weekend since easing its lockdown, warning that police would break up any large gatherings.

On Saturday some of the country’s most famous surf spots on the south coast resumed business as usual, with the public taking back to the sands despite general apprehension.

With the European summer fast approaching, the key tourism industry is trying to salvage something from the wreckage.

Parasols and sun-loungers are starting to appear on coastlines in Italy.

‘It moves me to see these sunshades,’ said Simone Battistoni, whose family has been running the Bagno Milano beach concession in Cesenatico on Italy’s east coast since 1927. 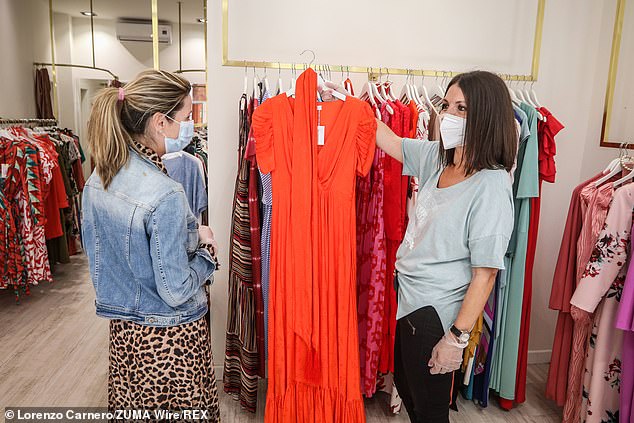 Clothing stores in Malaga, Spain, have reopened to the public with new hygiene and safety measures 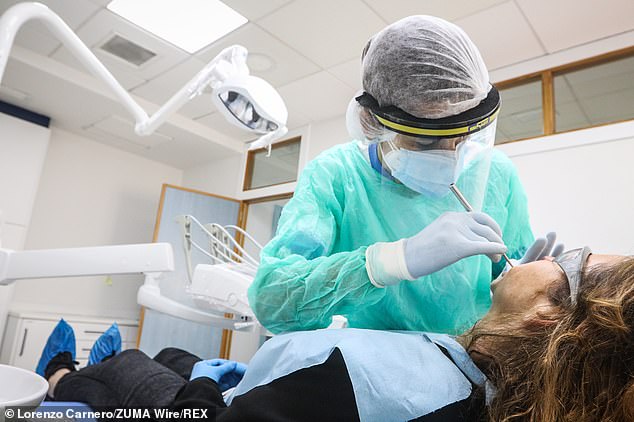 Dentists were also able to reopen in Malaga, Spain, as the country eases its coronavirus lockdown measures 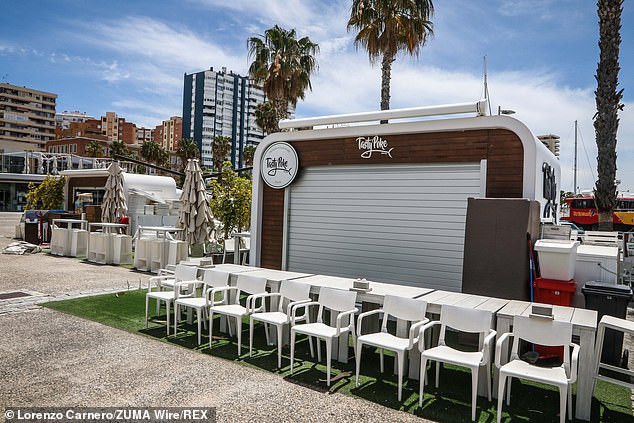 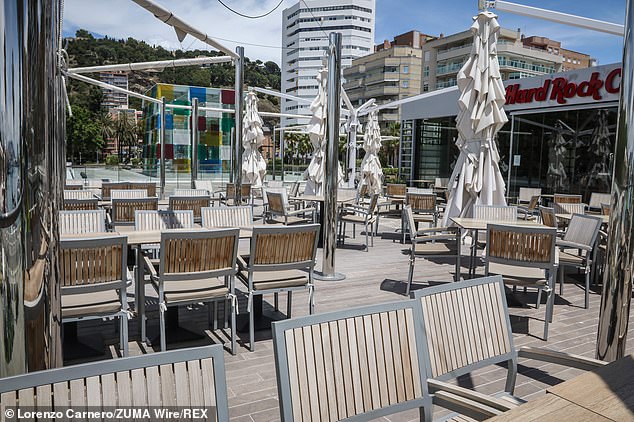 ‘We missed it and we’re going to come back as much as possible,’ said Fanny and Sophie, 19-year-old students waiting for breakfast at a cafe in the Austrian capital.

As some countries start to reopen despite fears of a second wave of the pandemic, US President Donald Trump voiced hope that a vaccine would be available by late 2020.

‘We are looking to get it by the end of the year if we can, maybe before,’ Trump told reporters at the White House Friday as he discussed America’s ‘Operation Warp Speed’ effort in the global race for a vaccine.

The timeline – deemed unrealistic by many experts – is more aggressive than the one-year scenario put forward by European scientists.

The hunt for a vaccine for a disease that the World Health Organization (WHO) says may never disappear has also threatened to become a source of tension between the globe’s haves and have-nots, with trials underway in various countries.

Some European countries cannot afford to wait, however, and this weekend marks the first tentative steps of bringing public life back to a more recognisable level.

Caitlyn Jenner slams Trump for insulting transgender community and says she was wrong to support him
Woman finds rusty NAIL in chicken thigh she bought from supermarket
Child Genius viewers slam mother of two for ignoring her daughter and praising her brilliant son
Daughter of Joanna Dennehy reveals how her loving mum turned into a man-hating serial killer
WEATHER: Commuter chaos as heatwave sparks trackside FIRES with police called in to rescue people
Naked couple fall to their death while having sex when they topple off a third-floor balcony
Rebekah Vardy appears to take a swipe at Coleen Rooney feud
Teenager, 19, is seriously injured after shooting near a nursery school in Coventry