This morning, as my partner and I set out for our daily exercise, Fitbit at the ready and with 10,000 steps in mind, I felt like a criminal.

Two policewomen on horseback trotted by — we live close to a Metropolitan Police Mounted Branch — causing a moment of anxiety. Did I look like someone who should be cowering indoors or could I pass for a healthy citizen, rightfully out and about? In the event, they smiled and continued on their way. Phew! I’d fooled them.

Call me a covidiot if you like. Tell me I’m irresponsible and that if I get ill I don’t deserve treatment. Damn me on social media as selfish if you must. But I don’t care. In my eyes, my rule-breaking is common sense, even responsible.

Unlike government scientist and social distancing advocate Professor Neil Ferguson, who broke the lockdown to continue an affair with a married mother of two, I’d argue my infringement put no one’s life in danger except my own. 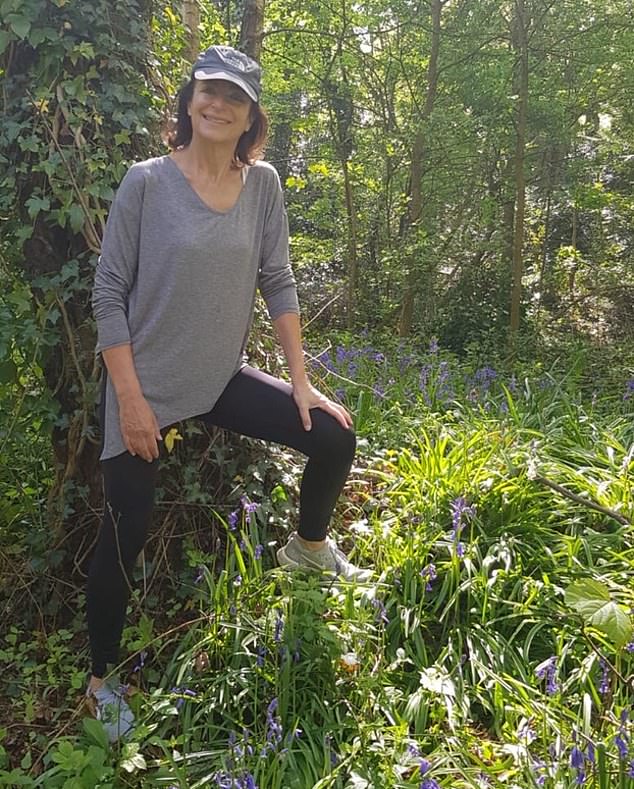 Linda Kelsey, 68, (pictured) who was advised by her GP to avoid all face-to-face contact for at least 12 weeks, explained why she’s been flouting the rules

The thing is, ten days ago, five weeks after Boris Johnson first announced lockdown measures, I received a letter from my GP. Worded according to a government template, it suggested that the safest course of action for me was to stay at home and avoid all face-to-face contact for at least 12 weeks. I have been told, in effect, to ‘shield’ myself.

I didn’t get the letter sent to over-70s by NHS England at the outset as I am a mere 68. Nor did I get the first ‘shielding’ letter received by 1.5 million people. But now my condition has been noted.

A few years ago my spleen was removed, which means I am immunosuppressed and prone to secondary infections that, once they take hold, could prove fatal. Best, in other words, for me not to get coronavirus.

It turns out I have been flouting lockdown rules from the very beginning, even though I didn’t know those rules applied to me.

Well, I did suspect as much, but because I wasn’t on the original list of people at high risk — those having cancer treatment, with respiratory problems or heart trouble — I chose to ignore what I knew to be true: that I am super-vulnerable. But now that I know, I intend to carry on just as before.

This is because as a result of lockdown I feel fitter than I have for years. Every day, without fail, we head off for walks, making the most of the wooded areas close to the local heath, which we have practically all to ourselves.

For an hour or two we walk at pace and raise our heart rates. With fewer planes and cars, London air has become almost as fresh as in the countryside, and I can feel my lungs opening up, replacing the shallow breathing that had become my habit. 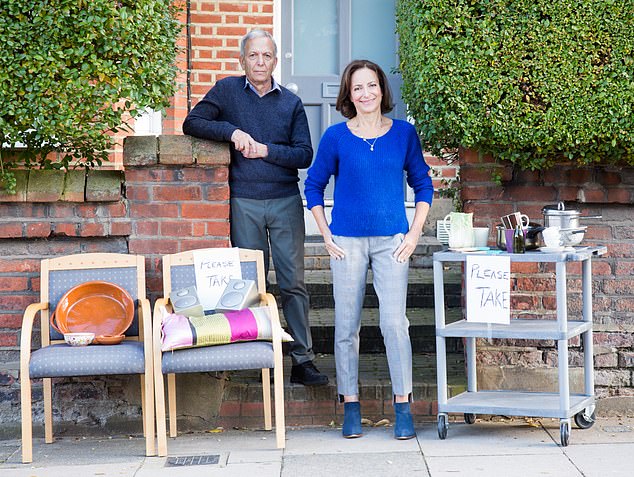 Linda said if she doesn’t flout the rules, she would spend the day sitting close to a window and trying to appreciate an uninspiring view. Pictured: Linda Kelsey and her partner

The sound of birdsong has replaced traffic noise and my anxiety levels have plummeted. My muscles are stronger and joints less stiff. Mentally and physically, I am benefiting from all the extra exercise. Fresh air and movement are good for our immune systems, making us less likely to need treatment from the NHS, medical or psychiatric.

On the other hand I know exactly how I will feel if I spend my day sitting close to a window and trying to appreciate the uninspiring view. Sad. Bored. Fed up. Stressed. Depressed. Which is why I believe that flouting the rules, while doing the best you can to protect yourself, makes way more sense than slavishly sticking to the guidance.

And now I feel vindicated. Research from the Office for National Statistics suggests the over-70s in particular are struggling with lockdown measures. They found this age group is increasingly glum and anxious.

Before lockdown, the over-70s had been reported as being happier than those aged 16-69, ‘by the third week of lockdown, this gap had closed so there was no significant difference in levels,’ the study said. 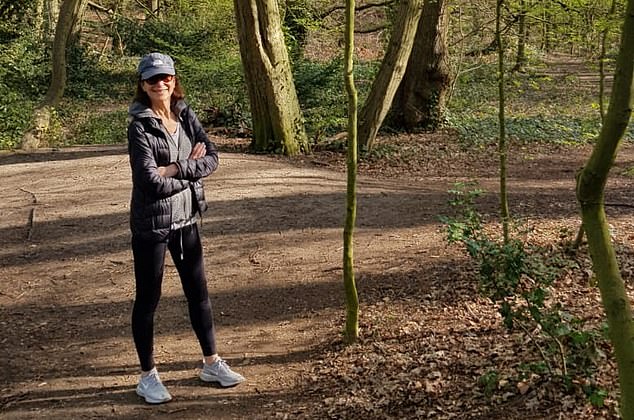 The ONS believes the more stringent social distancing measures for those over 70 could be responsible. No outdoor exercise, no friends or family visiting — hardly any wonder a sense of rebellion is mounting. Just as I believe healthy over-70s should be released from lockdown with the rest of the UK when measures are relaxed, I also think those of us who are clinically vulnerable should be given credit for acting responsibly according to our own judgment.

There are rules I do follow. I’ve not been inside a shop since late March, and have everything I need delivered. I cross the road to avoid anyone heading my way (I wish I could say they did the same for me). But I confess I’ve been misbehaving in other ways.

Like James Cracknell, the Olympic rower who came in for a beating on social media after snapping himself with his dad while paying him a visit in his garden, I have sat two metres away from my sister in mine — she lives in the same neighbourhood — during this prolonged sunny period.

She has had to shut down her business and I longed to give her a hug. That would have been a flout too far, but just being together was a tonic for us both.

On my birthday in mid-April, my adult son cycled over to surprise me. He would have been happy to wave from the street, but I invited him to enter the garden by the side gate, and we sat and chatted with the required distance between us for two hours.

It made a potentially miserable birthday special, and I didn’t feel I was risking my health or his. 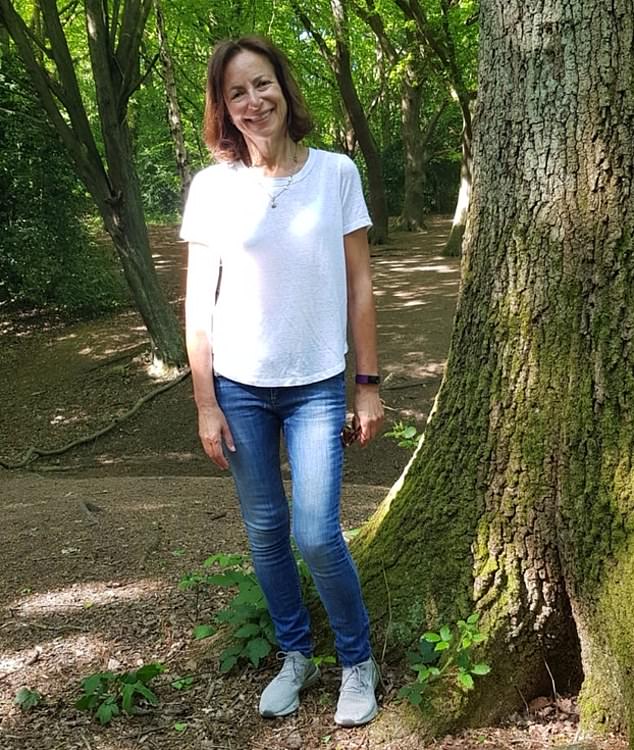 Linda (pictured) said small pleasures such as having her partner’s grandson visit, make her life in isolation more bearable

Yes, I suppose this did entail a small risk. He house-shares with three others (one of whom had the virus early on and has recovered) and goes out to buy food and ride his bike. Other than that, he sees no one.

But surely this is a lot less risky than Professor Ferguson’s trysts. Or even gathering on Westminster Bridge to clap NHS workers, or having joggers launch themselves at you like missiles when you cross the park. They are the ones who should be locked indoors, in order not to overwhelm the NHS, not me with my dodgy immune system.

And then there was the day my partner’s grandson came with his mum. He’d heard his grandad was ‘a bit sad’ and wanted to visit.

As it turned out, at three-and-a-half, he’s already a dab hand at social distancing, and not once did he stray close to us in our not-very- big garden. Yes there was the possibility he would, but he didn’t.

And such was the joy my partner — who, aged 66, is adjusting to not being able to practise as an osteopath during lockdown — got from seeing his grandson for the first time in almost two months, that it outweighed the tiny element of danger.

It’s small pleasures such as these that have made life in (near) isolation more bearable. And that’s why I shall continue to smile innocently at the mounted police every time they pass by, even as I continue to flout the lockdown rules.